This week’s Hammer of Math answer a question from reader Jeremy regarding the myriad options available to a the Contemptor Dreadnought.

Space Marines are rarely at a loss for choices, and the Relic Contemptor Dreadnought from Imperial Armour Compendium is a perfect example of that. At T7 and 9 wounds with damage reduction from Duty Eternal and a 3+ save / 5+ invulnerable save from Automantic Shielding they’re a challenge to kill, and their BS of 3+ can be applied to a massive host of weapons. Plus they’re CORE. The basic loadout for the Relic Contemptor is a pair of heavy plasma cannons, but things quickly go off the rails when you look at the “wargear options” section of the Datasheet:

For those keeping score at home that’s 272 possible combinations (props to FreakyBlueEyes on Reddit for doing the math correctly). The Chaos version is practically identical to the loyalist, with the exception of a lot of ‘hellforged” adjectives and a chainfist that deals 2d3 damage (6 against VEHICLES) instead of a flat 4. With that in mind, how do you even choose what to use? For this approach we’ll take a look at four target sets; two vehicles, with profiles of T8/3+/5++ and T7/3+ as well as two infantry targets, with profiles of T4/3+/2W and T3/5+/1W. The final analysis will include the mean and standard deviation for each weapon, but for the charts we’ll focus on the best performers along with their options. 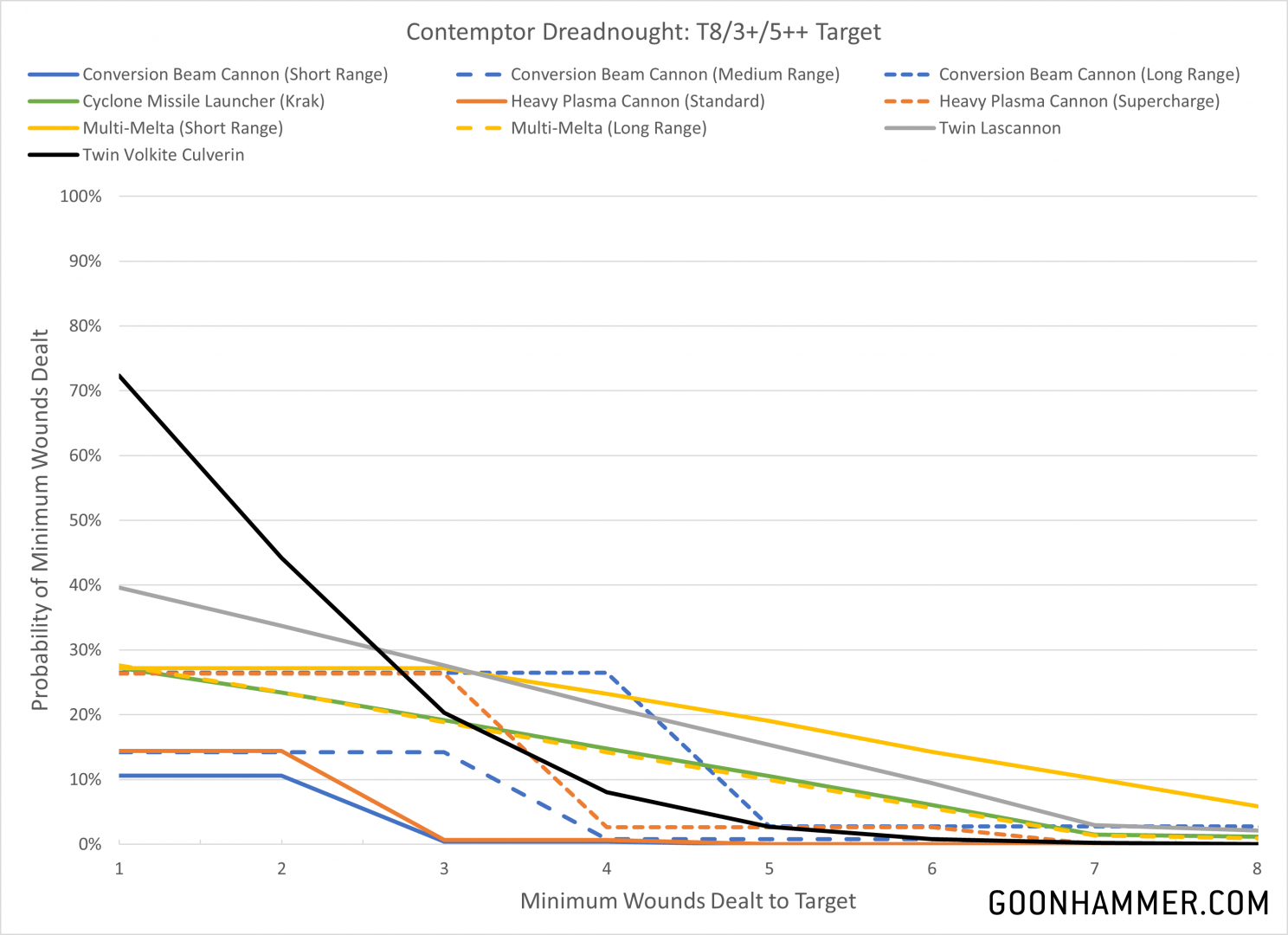 Unsurprisingly the heavy hitters like the lascannon, multi-melta, and long range conversion beamer all perform well in these calculations, but the output of the twin volkite cannon is also something to keep an eye on. The large number of shots and possibility of dealing mortal wounds makes it a very flexible weapon, and comparatively if the target has an invulnerable save that’ll cap off the efficacy of the dedicated tank killing weapons. The major takeaway here is that none of these weapons have a great chance of doing a significant amount of damage, with even the short range multi-melta only dealing 8 or more points of damage roughly 5% of the time. As CORE units these Dreadnoughts will definitely benefit from a re-roll aura, particularly re-rolls to wound for the twin volkite culverin. 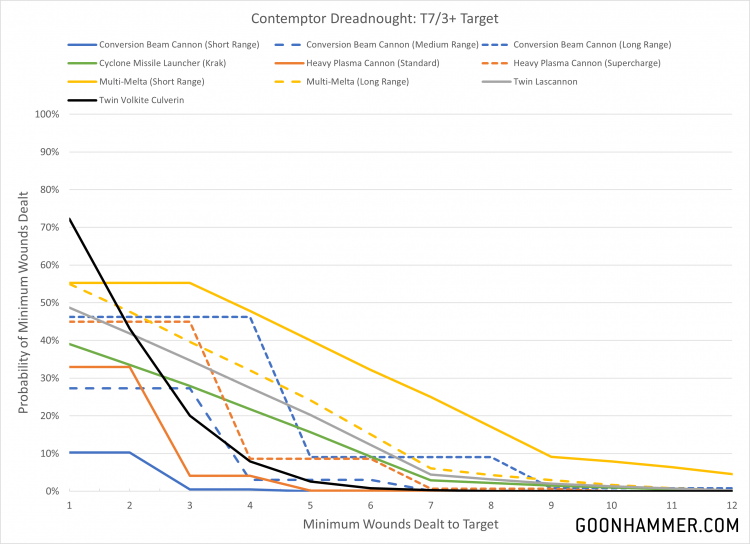 Removing the invulnerable save dramatically improves the effectiveness of the multi-melta, long-range conversion beamer, and even the heavy plasma cannon, which sees a boost here. The classic combination of twin lascannons and a cyclone missile launcher also stand out as a great way to dish out damage from a variety of distances. While the multi-melta is unquestionably more powerful, this comes at the expense of needing to get close. This is less of an issue on boards with an extensive amount of terrain, but if your meta is regrettably sparse on cover then being able to keep your distance may be worth it, particularly with a contemptor that isn’t suited to melee combat. 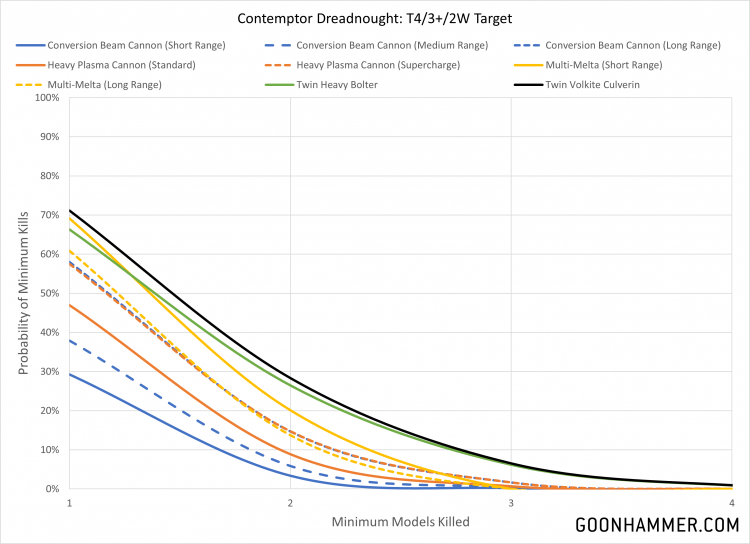 For the infantry models we’re switching over to models killed instead of wounds dealt; this allows us to see how the various options pan out while accommodating the presence of lost wounds. Here we see that in general the Contemptor’s weapon choices aren’t exactly the most awe-inspiring when it comes to killing Marine equivalents. The twin volkite cannon is an incredibly effective and appealing choice, while the twin heavy bolter also has a place. The multi-melta performs well here purely on account of how easily it is to kill a single model, and how difficult it is to successfully get a lot of marine kills with these weapons. Note that the heavy plasma does not take into account the Blast property, which will give it a boost against larger units. 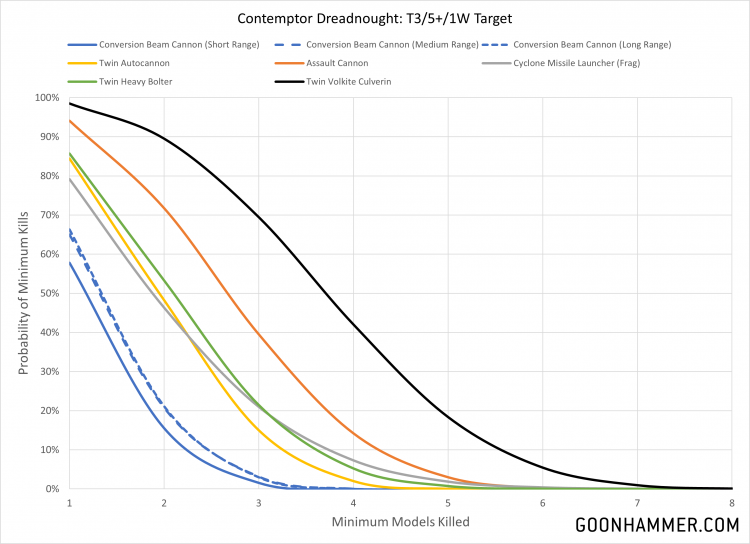 Against Guardsmen and other chaff the assault cannon and frag assault launchers finally come into play. The autocannon also seems viable, as does the heavy bolter. All pale in comparison to the output of the twin volkite cannon, as the combination of high strength and large number of shots (not to mention the occasional mortal wound) make it utterly devastating against horde targets. It’s rare to see a weapon be as universally useful as this, but I suppose rays of pure heat would be good at killing anything they touch. 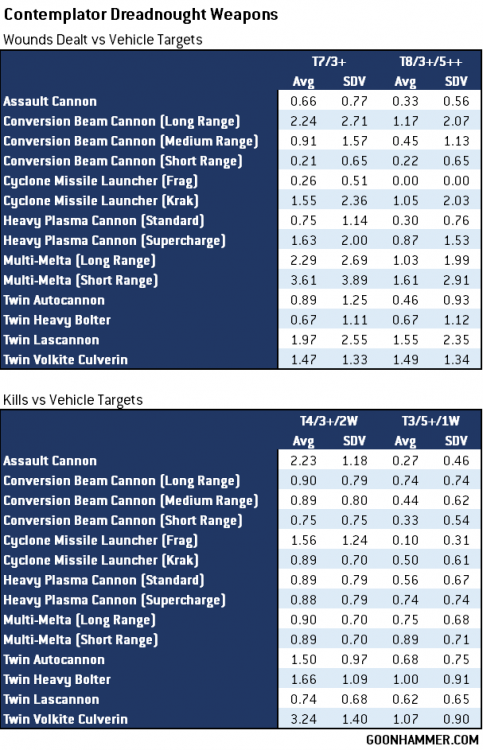 While your local meta will definitely play a major role in dictating which weapons are most viable, the fact that the twin volkite cannon was so useful against such a wide variety of targets makes it a very appealing option. It’s not a huge shock then that this is also the loadout we’ve seen played competitively, most recently in Death Guard armies where it can also benefit from the auras generated by the Foetid Virion. Where it’s likely to be weakest is against the incredibly tough tarpit units like Deathwing Knights and any Death Guard with damage reduction (though even there the mortal wound output helps mitigate this). But for everything else it looks fantastic, especially when combined with the cyclone missile launcher.