This week’s Hammer of Math takes a look at what is likely going to be a significant challenge for many armies; killing a block of 20 Necron Warriors.

With the release of the latest iteration of Codex: Necrons we’ve seen a dramatic shift in how everybody’s favorite Space Undead respond to firepower. The change in Reanimation Protocols from an end-of-turn effect to a constantly revolving resistance to incoming fire has forced players to reconsider what units to field and in what numbers. One of the units seeing the biggest comeback is the lowly Necron Warrior, who thanks to Their Number is Legion are extremely resilient. The way Reanimation Protocols work is that if a unit’s attacks does not completely destroy the Necron unit then every wound lost allows the player to roll a d6; every result of 5+ creates a “pool” of wounds that can be used to bring models back. In the case of Necron Warriors with their single wound the effect is basically a super Feel No Pain that ignores excess damage. This also encourages Necron players to field large blocks of Warriors to increase their chances of surviving an attack. With that in mind, exactly how hard are Necron Warriors to kill? In terms of attacks there are two numbers to consider. The first is the probability that a unit’s attack will wipe out the block of Warriors, denying them access to RP and guaranteeing they stay dead. The other is the worst case scenario; the maximum number of attacks if the unit is slowly whittled down. By knowing these two numbers we can get a sense of exactly how likely a given unit will be able to destroy the target… eventually.

To calculate the graphs below I used a Monte Carlo method where I simulated a million rolls and determined which sequences would result in a dead Necron Warrior. I then used those rolls to determine how many individual attacks were required to kill 20 Necrons (both with and without Resurrection Protocols), and from that I determined how many attacking models were required to achieve that number. Charting those results gave me two curves; one for the best case scenario (every Necron killed in one attack) and the worst case scenario (every Necron slowly whittled down and getting a RP roll after each attack). In the case of blast weapons we use the maximum possible value, which means that over multiple attacks the results would be less effective but it’s a price I’m willing to pay for the sake of computational efficiency.

An example chart can be seen below using the lowly Imperial Guardsman. We see from the orange line that there is no possible scenario in which a unit of Guardsman will kill 20 Necron Warriors in a single attack; while having 100 Guardsman fire all at once is a regular Tuesday for the Astra Militarum it doesn’t work that way in Warhammer 40,000. The blue line is equally depressing; the worst case scenario requires that 200 Guardsman fire at the incoming Necron Warriors to have a 60% chance of wiping them out. Note that the blue line does not include the possibility of an attacking unit wiping out a partial squad of Necron Warriors, hence why it’s the worst case scenario. 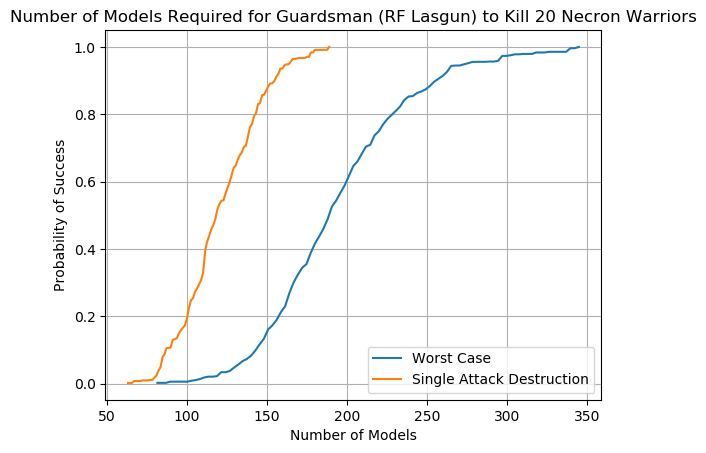 To start off we have an assortment of Adeptus Astartes units including Boltstorm Aggressors, Intercessors armed with auto bolt rifles, and the traditional rapid firing Tactical Marine. We immediately see that things are going to be a challenge here, with even the maximum unit size of Aggressors unlikely to wipe out the block of Warriors in a single attack. Things were definitely easier when the Aggressors could stand still and double fire, but that’s simply not the case anymore. We see the same issue with Intercessors and the traditional Tactical Marine; the amount of firepower required to kill 260 points of Necrons is considerable. 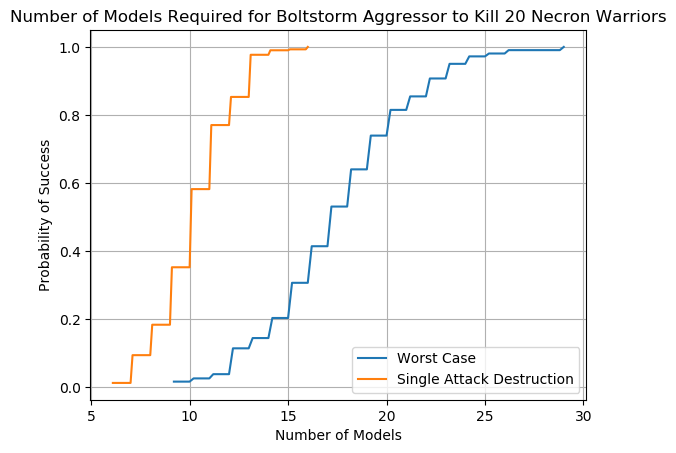 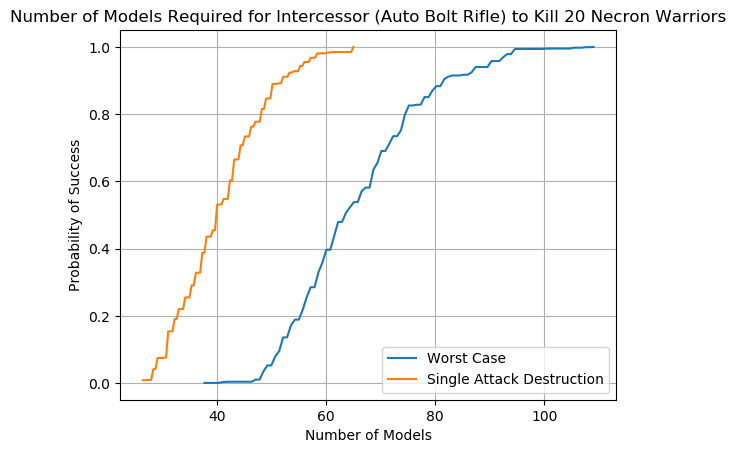 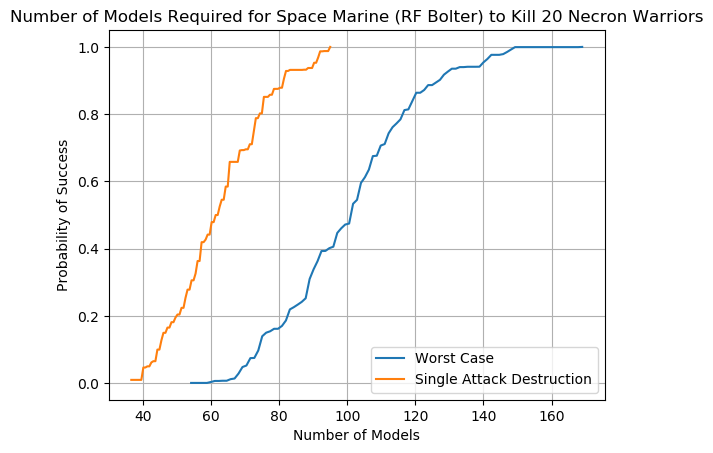 Charging Bladeguard Veterans can do some damage with their power swords, but the resiliency of the squad will likely require multiple rounds of combat to wipe them out. 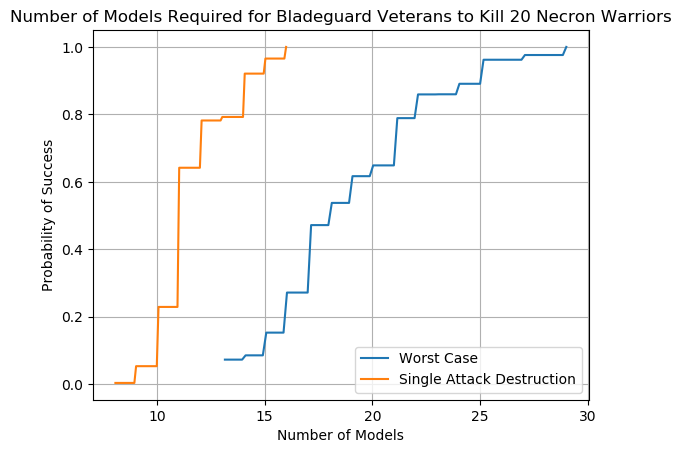 What about the Deathwatch? Under the latest codex Deathwatch have access to the ability to impose a -1 penalty on Resurrection Protocols thanks to the Overkill Stratagem. The downside is that this only works on a single attack each phase, which makes it best reserved for either multi-wound units (who need multiple successes to come back) or after a massive number of models are lost. The curve below assumes that the Deathwatch Veterans are using SIA to get a +1 to wound via Hellfire rounds, that the attack gets to re-roll 1s to wound, and that the attack is in the Tactical Doctrine via Mission Tactics. Unfortunately once again we see that the lowly bolter is unlikely to kill the units in a single shooting round, and that even with all the bonuses it’s going to take a lot of shots to kill these Warriors. 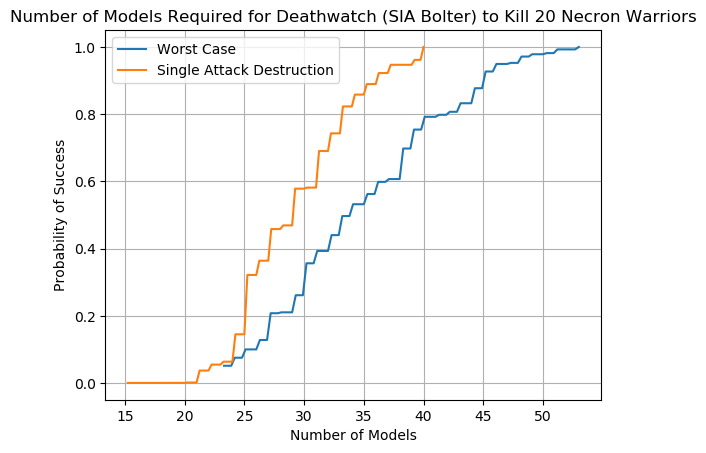 Mirror matches are always fun, so what happens if a block of 20 Warriors faces another block? The answer is not much. Even with the best weapon available in the form of a Gauss Reaper, there’s less than a 10% chance that the target will die in a single shot. 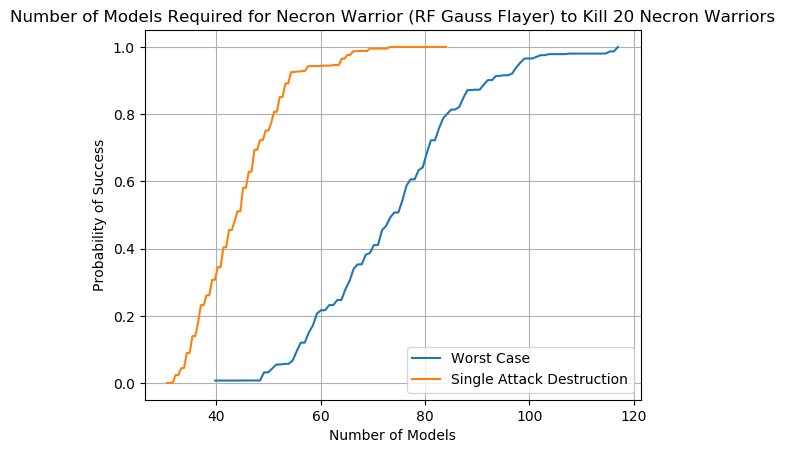 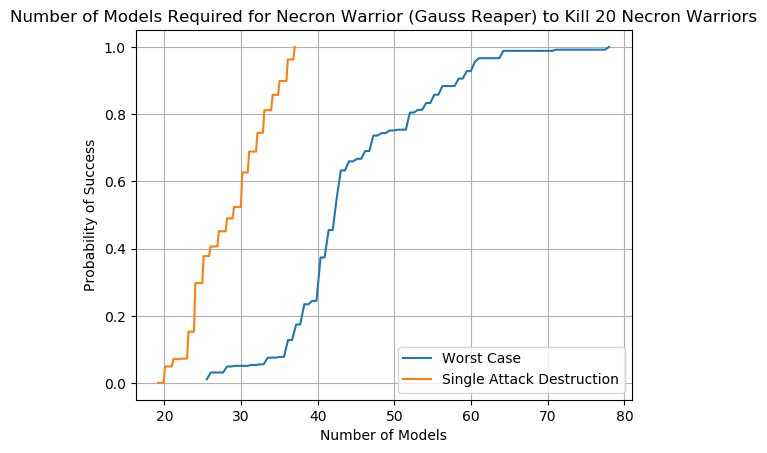 While Genestealers have unfortunately fallen out of vogue with the new changes, they remain one of the most lethal and effective options for wiping out nearly anything. A block of 20 Genestealers with the support of a Broodlord has an 80% chance of slaughtering the Warrriors in a single pass, and if the Warriors are unable to escape it’s almost certain that the unit would be annihilated the next turn. We see the opposite for Hormagaunts and blocks of Termangants armed with Devourers (which put out far more shots than the cheaper Fleshborer which you are more likely to see); there’s just not enough output to guarantee a one attack kill. 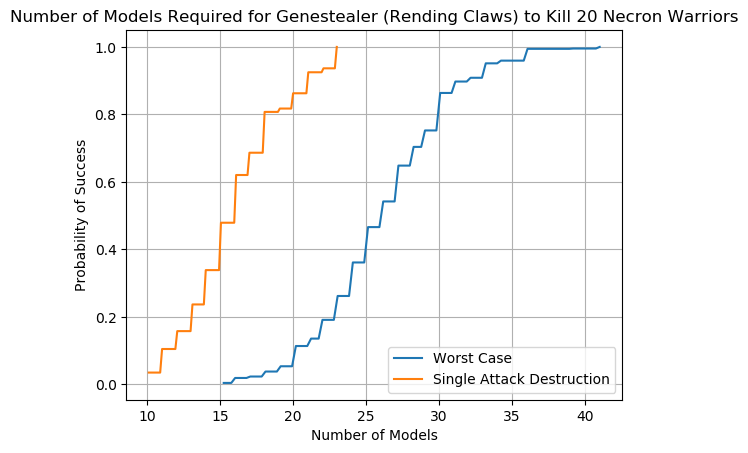 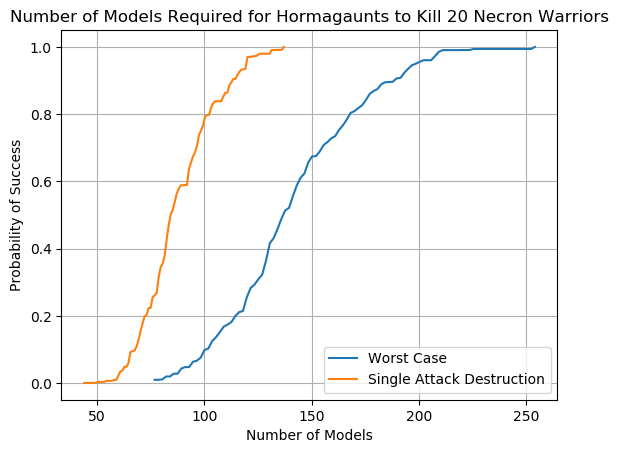 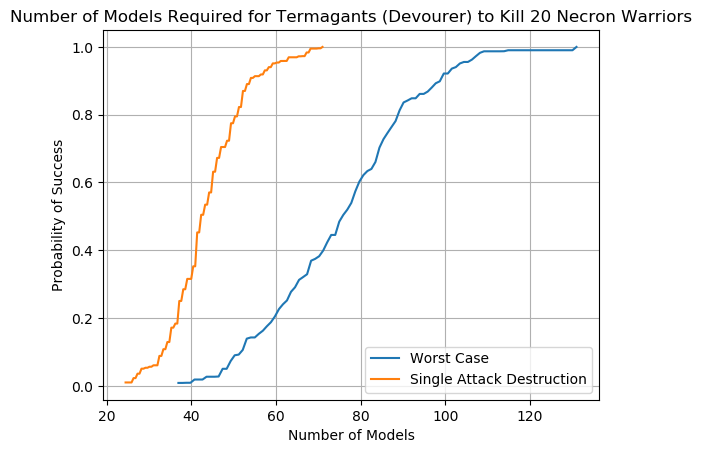 The Death Guard have access to one of the most devastating weapons in the game, which we covered previously. When a unit of Plague Marines uses the Blight Bombardment Stratagem they can all throw blight grenades; each getting 6 attacks against a unit of 11 or more models. When combined with Veterans of the Long War and the presence of a Biologus Putrifier the result is devastating. Here we finally see an example of what is necessary to kill Necrons; a massive number of high strength attacks with mortal wounds. A unit of 5 Plague Marines is practically guaranteed to blast the enemy in a single phase thanks to the combination of Blast and dealing mortal wounds on a wound roll of 5+ with 1s being re-rolled. Note the considerable improvement offered by the presence of the Biologus Putrifier. Don’t be surprised if this particular combination doesn’t make it past the next update of Codex: Death Guard which is scheduled for some time this year. 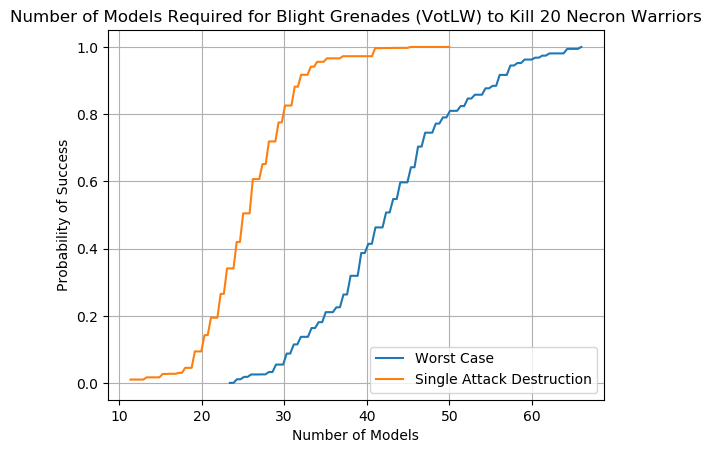 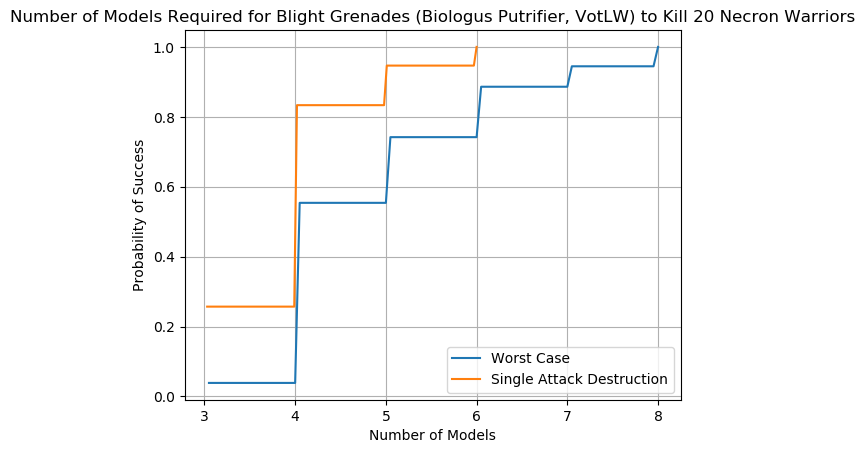 Outside of some high specialized attacks like blight grenades, blocks of Necron Warriors are incredibly resilient and are a force to be reckoned with. The ability to ignore multi-wound damage weapons and come back from anything on a 5+ with a re-roll makes them an excellent counter to small units that lack the firepower to kill them in a single phase, and even dedicated anti-horde options like Aggressors can struggle.