This week’s article takes a look at the utility of grenades in Warhammer 40K, and at what point (if ever) should you consider tossing one instead of shooting the enemy in the face.

The grenade is a bit of an oddity in 40K. They’re often incredibly commonplace, particularly in Space Marine units, but are rarely used. In terms of the rules grenades are a special type of weapon with a single rule; only one model can use a grenade when that unit shoots. Whether the weapon be frag, krak, haywire, shock, blight, photon, or plasma you only get one attempt. Grenades are also inherently close-assault weapons, with ranges that cap out at 12″ and are generally around 6″ (or 4″ for a melta bomb). The exception are Primaris Intercessors equipped with an auxiliary grenade launcher, who can fire a frag or krak grenade 30″.

So when should they be used?

In terms of profiles there are a surprisingly limited number of grenade options, with four profiles that are more or less the same and a few extra options added on as notes. With the exception of electrobane, krak, and melta (all single shot attacks) all grenades have the Blast keyword.

The easiest way to compare the output of these weapons to the shot they’re replacing is to use the expected value and see which weapon comes out on top. Melta bombs and demolition charges are special cases designed for scenarios where the alternative is a bolter or a lasgun, so instead we’ll focus on the more common frag, krak, plasma, and blight. The image below shows the expected value in terms of damage given a hit; this allows us to make a comparison between attacks from the same BS. Note that these expected value charts do not take into account the possibility of wasted wounds; the benefit of a krak grenade is lost against a single wound target. 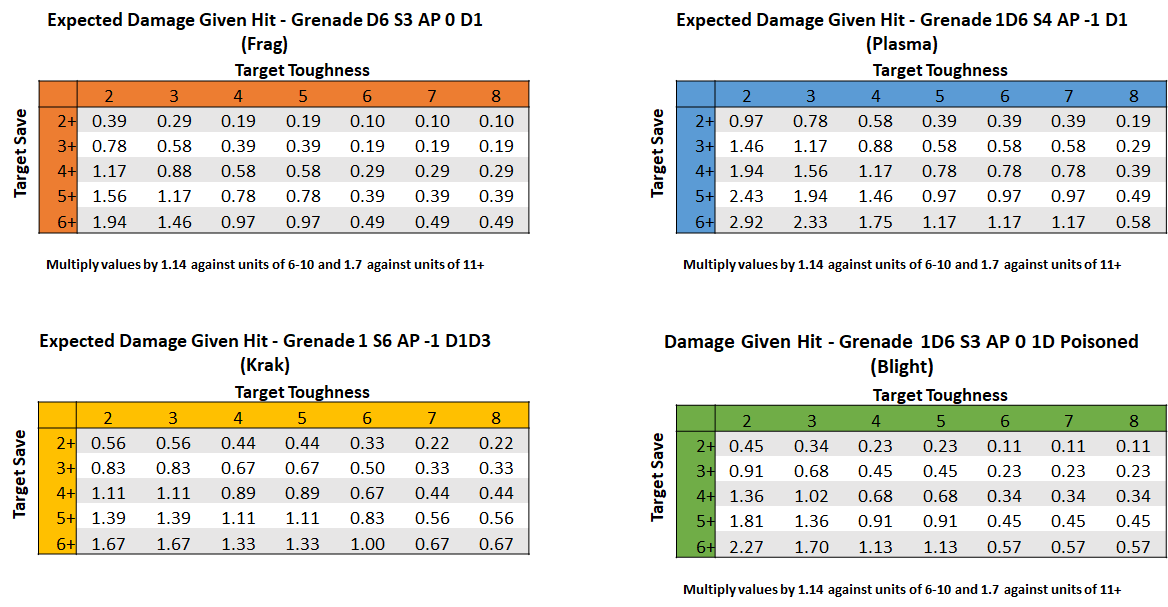 And we do the same chart for several common weapons fielded by the models which use those grenades. 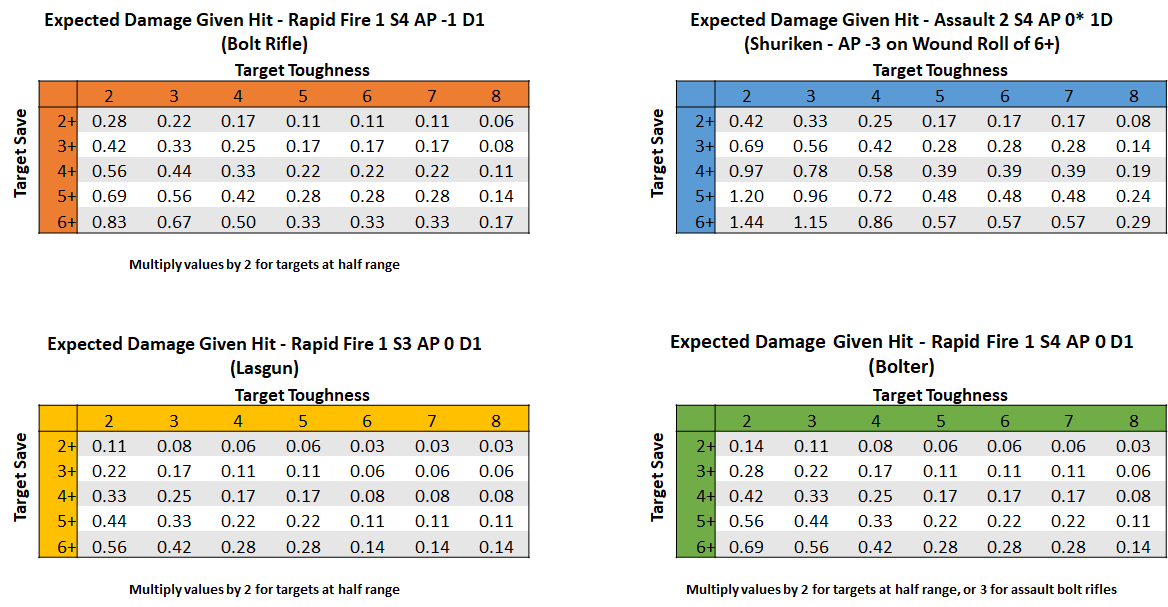 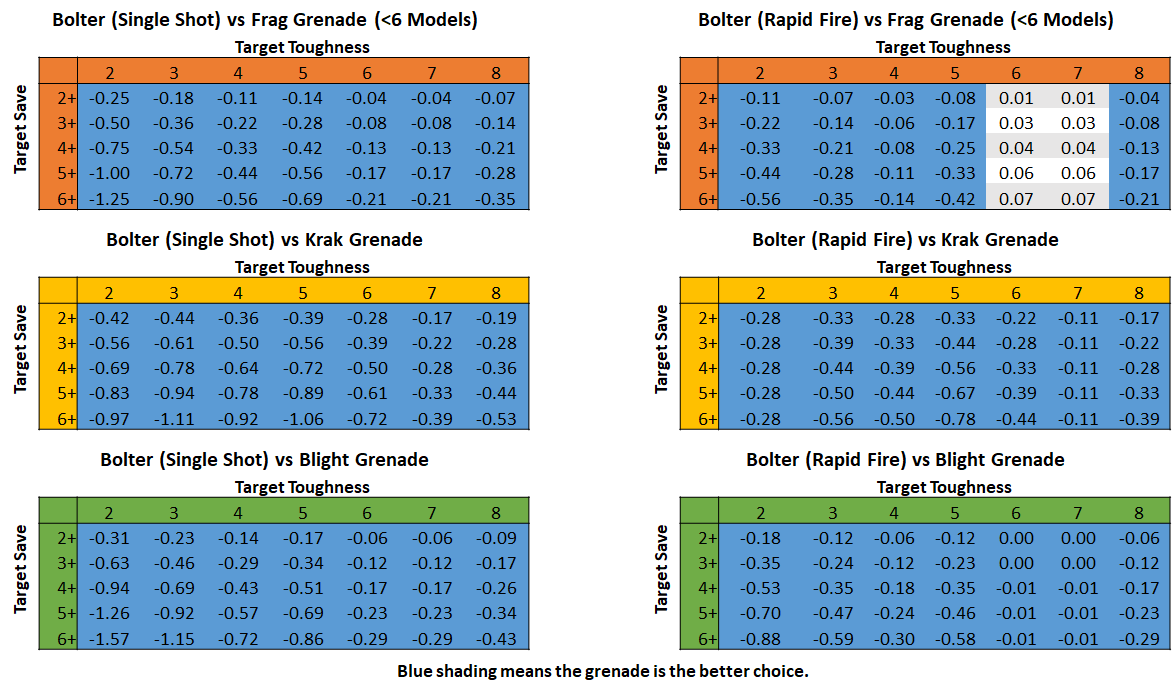 The results also indicate that the lasgun, which is categorically worse than the bolter, is going to be inferior to the frag and krak grenade options for every scenario.

For Primaris marines we have two options to examine. First, the bolt rifle.

And second the auto bolt rifle. 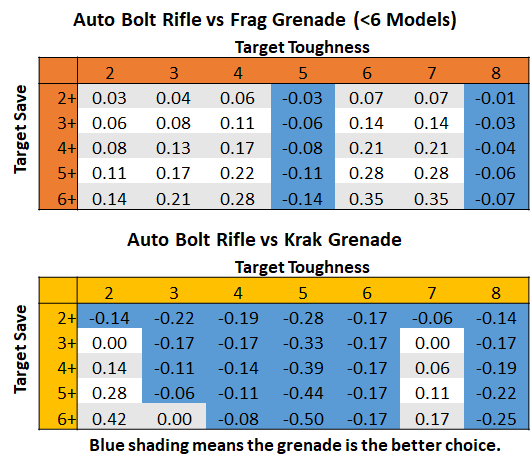 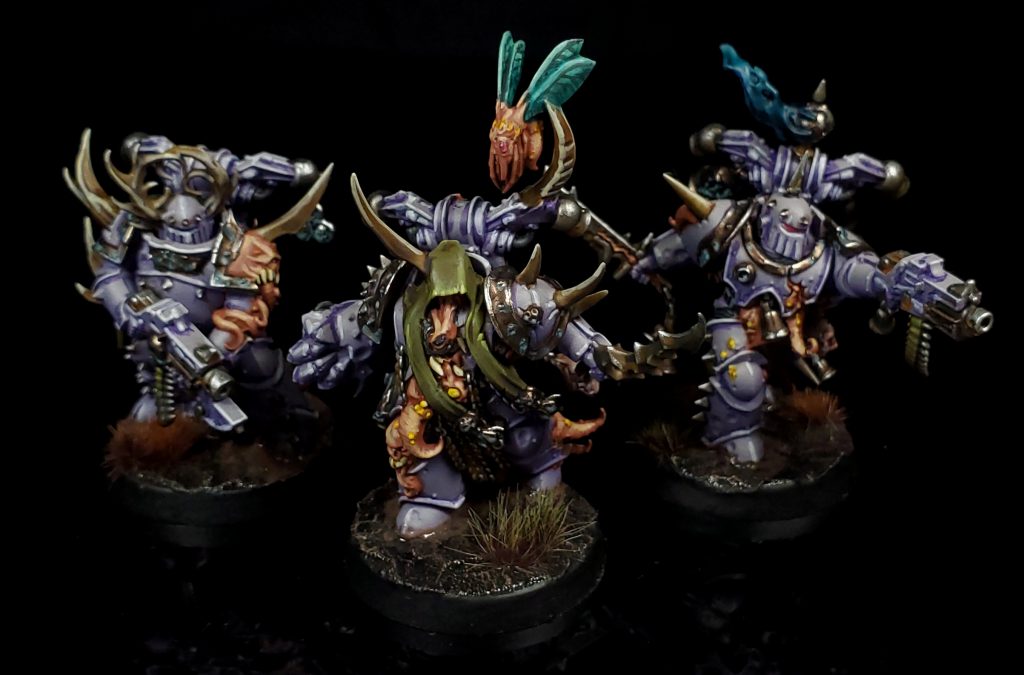 The Death Guard have access to some truly noxious options, including the ability for an entire squad to throw their grenades using the Blight Bombardment Stratagem for 1 CP. Those who might need an extra bit of range can add 6″ using the Overwhelming Generosity Stratagem for another 1 CP. This can be further enhanced with Veterans of the Long War which provides a +1 to wound rolls for 1 CP. Finally, in the presence of a Biologus Putrifier the Strength and Damage characteristics of Blight Grenades are increased by 1, and a wound roll of 6+ with a blight grenade inflicts a mortal wound. Put it all together and you have a huge number of S4, AP 0, D2 attacks which get a +1 to wound and deal a mortal wound on a 6+. With a 12″ range this can pose a significant threat. You can do this via Strategic Reserves, but the less CP-intensive version is by arriving in a drill which has native deep strike rather than costing you 3CP. As you can see from the chart, 10 Plague Marines is enough to delete almost anything, which can comfortably fit in the drill – though 20 of them coming out of reserves can delete anything in the game with relative ease. Getting the entire Stratagem combination out is another 3 CP, but the end result is a threat to a significant portion of the board that can only be defended against by screening units out. 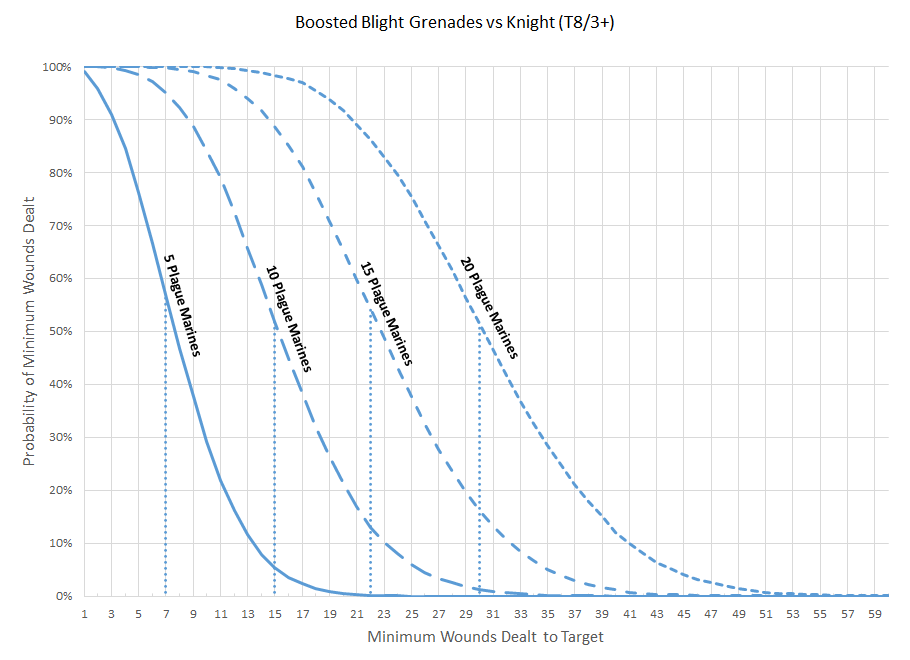 The output of 20 Plague Marines is comparable to Wolf Lord Smashwolf Wolfsmash the 2nd, albeit at a much higher price. This could be further improved with the addition of a Chaos Lord to allow the extensive number of shots to be re-rolled; in that situation 15 Plague Marines is enough to reliably take down a Knight. That said there is no obligation to attack a single target; all of the bonuses are on the unit and as a result Papa Nurgle’s gifts could be spread out to a wide variety of potential hosts.

Grenades hold an interesting place in the game, and players should be aware of their utility. This is particularly true for units which have access to extra range for grenades, such as Intercessors.