This week’s Hammer of Math goes outside the realm of probability and arithmetic to look at something you probably haven’t thought about since middle school; geometry. Specifically how the smaller battlefield should change your expectations for how the game will play.

When Games Workshop revealed 9th Edition, one of the most significant changes was the declaration of a nominal board size for different point levels. 2000 points was declared the standard game size of 40K and instead of the traditional 48″ x 72″ board size that players had been used to for decades GW stated that a 44″ x 60″ board size was the optimal battlefield. Battles of 1000 points or less were also given a nominal battlefield size; 44″ x 30″. Conveniently enough 44″ x 60″ is the same as four Kill Team boards or one Moon Base Klaisus kit (well, nearly – the Moon Base is just a little different, for extra moon buggy drifting possibilities). Supposedly the Kill Team boards were based on the limitations of what boxes GW can carry in inventory, producing an effect similar to the apocryphal story of how the design of Space Shuttle Solid Rocket Boosters were in part constrained by the width of a horse’s ass. 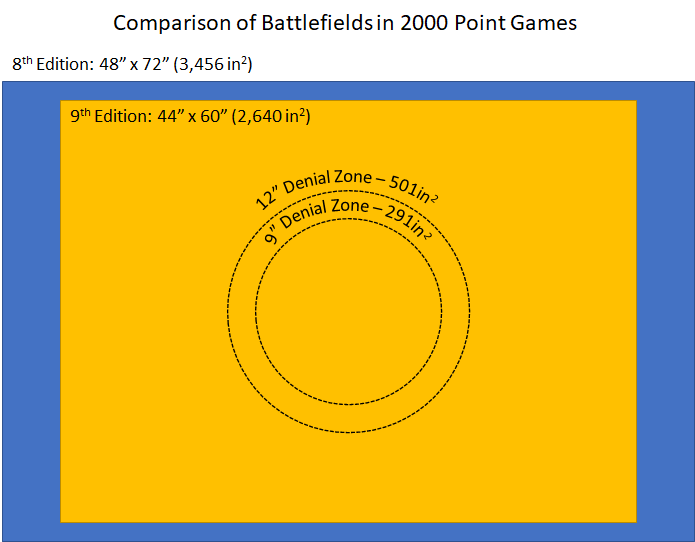 Regardless of the veracity of the origins the consequences to 9th Edition are very real. A traditional 48″ x 72″ table has 3,456 square inches of area to play on. A standard 2,000 point game in 8th Edition therefore had a density of around 0.58 points per square inch. The new board size of 44″ x 60″ is only 2,640 square inches, or 76% of the area of a standard 8th Edition board. As part of the new edition Games Workshop updated the point values for every army, consolidating some values and generally increasing things by roughly 10%. If Games Workshop intended for the density of the board to be the same between editions the increase would have been much larger; using the density from 8th Edition a 44″ x 60″ board would only be able to accommodate 1,531 points. Instead it’s supporting the equivalent of 1,818 points (2,000 points divided by 1.1). The major takeaway from this is that compared to 8th Edition, 9th Edition battlefields are about 20% more densely packed with models. Things get even tighter when you consider that 9th Edition is designed to contain significantly more terrain than 8th Edition, with a recommended density of 1 terrain piece per 12″ x 12″ section (or approximately 18 pieces of terrain for a 44″ x 60″ board). Players who use Power Level (such as those playing with the new Crusade system) will find that, as Games Workshop has not yet adjusted anything, battlefield densities are roughly 30% higher for Power Level games in 9th Edition compared to 8th.

The increased battlefield density is offset by the addition of the Strategic Reserves. Players pay 1CP for every 10 Power Level that they put in reserve (1 CP for 0-9 PL, 2 CP for 10-19 PL, etc) and have the option to bring these models in from the battlefield at the end of every Movement phase from turn 2 onward. In turn 2 Strategic Reserves can arrive wholly within 6″ of any battlefield edge with the exception of the enemy battlefield edge (which is defined by the mission) and not in the enemy deployment zone. On turn 3 and onward they can set up wholly within 6″ of any battlefield edge except for the enemy battlefield edge. Regardless of the turn, Strategic Reserves cannot be set up within 9″ of an enemy models with one exception: models can deploy within 1″ of their own board edge even if it puts them within 9″ of an enemy model or even in Engagement Range. The Strategic Reserve rules do not affect alternative options for deployment such as the White Scars Encirclement Stratagem, and Games Workshop has not clarified if the player board edge exception also applies to abilities that deny set up such as the Omni-scramblers ability for Primaris Infiltrators. 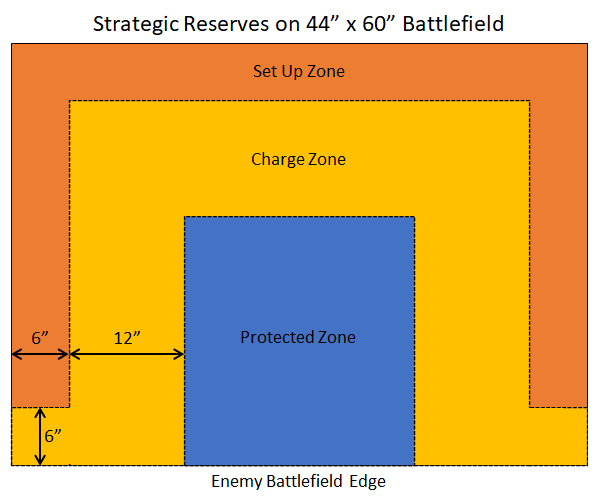 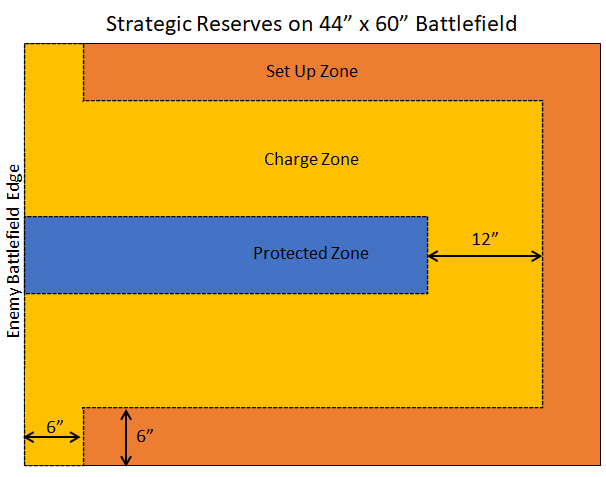 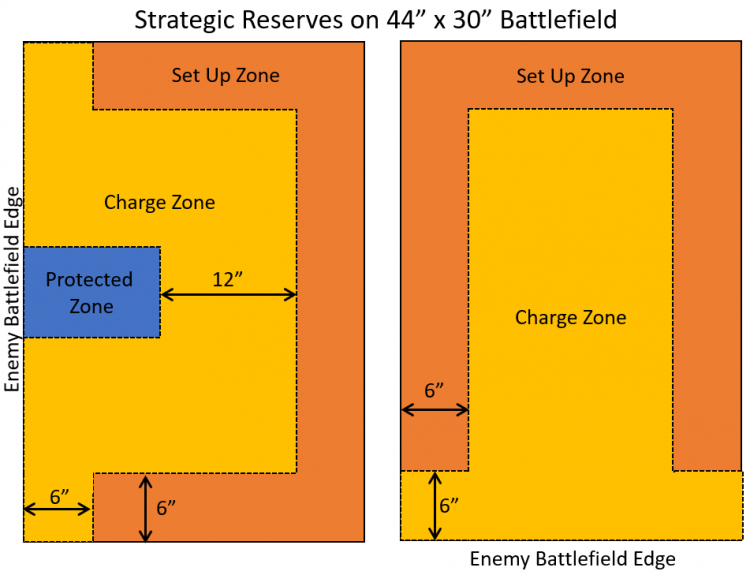 In terms of a standard 44″ x 60″ battlefield with player edges defined as the long edge, the end result of the Strategic Reserve rules is that only a 24″ x 26″ section in the center of the board is immune to getting charged. The 6″ border of the orange zone is 744 square inches, or about 28% of the available board. Add in the yellow area representing regions where models can be charged and only 24% of the board is guaranteed to be safe from getting charged. The dimensions for a short edge are significantly different, with only a 42″ by 8″ wide strip in the center immune to getting charged which is only 13% of the board. In this case the set up zone is 840 square inches, or 32% of the board. In other words the Strategic Reserve rule puts a significant portion of the board at the risk of getting charged, and the nature of the threat is heavily dependent on the mission.

The presence of Strategic Reserves and the emphasis on holding objectives that is a key part of 9th Edition makes the area denial effect of units very important. This effect is compounded by the reduced board size. A 32mm model with a 9″ denial radius covers 291 square inches of board space, or about 8% of a 48″ x 72″ board. In 9th Edition that area covers 11%. Infiltrators, with their Omni-scrambler ability, deny set-up within 12″ of the model that results in a circle with an area of 501 square inches or 19% of the board. A single 5 man squad of Infiltrators, positioned in a line 2″ apart, can deny access to approximately 830 square inches or 31% of the board. This means that four 5-man Infiltrator squads can effectively shut down the entire board from deep strikers, and it only take three squads to prevent Strategic Reserves from entering the board (at least until GW likely FAQs that abilities that deny set-up do not prevent units from deploying within 1″ of their friendly board edge). The image below is a visualization of that effective area denial.

9th Edition is going to require players to totally rethink their expectations about how the game is played. The increased density, emphasis on holding objective markers, balancing primary and secondary objectives, and major changes to scoring represent a significant shift in the game.