This week’s Hammer of Math takes a look at the updated Disgustingly Resilient rule that Warhammer Community recently announced. Although the actual Codex: Death Guard has been delayed until after 2021 (Nurgle clearly has his hands full with 2020), this represents a pretty massive shift and is worth looking at particularly in the context of 2W Plague Marines.

One of the most iconic aspects of the Death Guard is their resiliency, their ability to withstand unimaginable amounts of firepower and stagger inexorably forward. Since at least 5th Edition, Disgustingly Resilient has taken the form of an ability to ignore wounds in the form of a “Feel No Pain” (an actual rule in past times which is still commonly used to refer to similar effects in 8th and 9th, which did away with the name itself), and in 8th Edition this was particularly effective. In mathematical terms, effects like Feel No Pain have a significant impact on the average number of attacks required to kill a unit. This is because not only does the original attack get the save, but the subsequent attack that has to be made because the original attack failed can also potentially be saved. The end result is effectively a multiplier on the number of wounds a model has…

In other words the effective wounds required to kill a target is a function of the reciprocal of the probability that a given save roll will fail. If you have no save then the result is one. If you have a 6+ save then the effective wounds is 120%, meaning that a 10 wound model with a 6+ save will (on average) take the same amount of firepower to kill as a 12 wound model with no save. For a 5+ save the multiplier is 150%, meaning that the average amount of damage required to kill a 2 wound model with a 5+++ is the same as a 3 wound model with no save. It’s important to note that the function is not simply the chance that a save will be made; saying that a 5+ save has a 33% chance of success so the target is 133% tougher is incorrect. That fails to take into account the fact that the save will always apply to subsequent attacks.

The new version of the rule does away with such rolling and instead is identical to the Duty Eternal rule that all Space Marine Dreadnoughts now have, only applied to everything in the army. Subtractive modifiers to damage are interesting because their impact scales with the amount of damage inflicted; the less damage dealt (assuming it’s greater than one) the greater the effect. Many readers may remember the era of Iron Hands when Games Workshop thought it would be a good idea to allow a vehicle to have their incoming damage halved and then reduced by subtraction. Part of the reason that this was so devastating was because it took very large attacks and reduced their damage to smaller numbers before subtracting from it (and then applying an ability to ignore wounds). Hopefully Games Workshop learned their lesson and there’s no such ability in the new book. The equation for the effective number of wounds for a modified damage attack is fairly simple:

A D1 weapons is still a D1 weapon, so the effective wounds is one. A D2 weapons becomes D1, meaning the effective wounds is 200% of the original attack. D3 becomes D2 or 150%, and so forth. We quickly see that compared to a 5+ Feel No Pain, on average the new Disgustingly Resilient is more effective against D2 and D3 weapons and less effective against everything else (assuming you have enough wounds for it to matter – on a 1 wound model, it doesn’t matter if the damage is 1 or 2, the effect is the same and your model is dead). Of course an average isn’t the end of it; the variability of the 5+ roll means that there’s a chance that any level of damage could be ignored, even the full blast of a Volcano Cannon. To examine this we can look at the variability associated with the 5+ roll and determine the probability that, for a given attack, the guaranteed reduction of 1 point of damage will be equal to or better than multiple attempts of a 33% chance. The chart below compares the probability that the new edition of Disgustingly Resilient is either equal to or better (middle column), or absolutely better (right column) than the old version. To do this requires looking at the binomial probability that either 0 or 1 5+ rolls will be made for a given amount of damage. Note that these calculations are only for a single attack; unlike the previous calculations these do not represent the influence of additional hits on the target. When we take the variability of the 5+ roll into account we see that, more often than not, the 9th Edition version of Disgustingly Resilient is equal to or superior than the previous version for single attacks that deal up to 4 points of Damage. 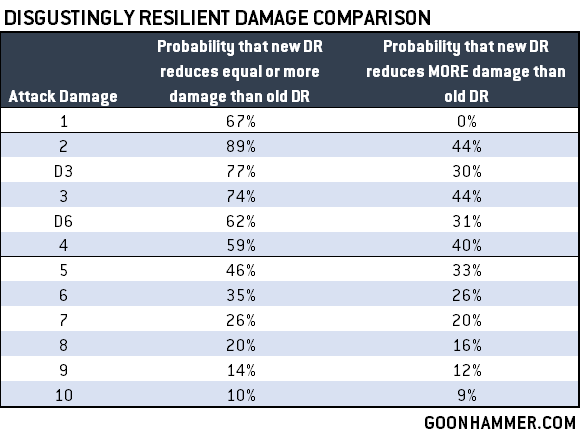 It’s important to consider the changes to Death Guard in the context of what happened to the rest of the stat line. Both Plague Marines and Blight Lords received an additional wound to put them in line with the rest of the Astartes, which immediately makes them twice as tough. With that in mind, did the new rules make these core units tougher or weaker compared to their legacy versions? The easiest way to examine this is to simulate several attacks using common weapons that have been effective against Astartes in the past. In this case we look at 10 bolter shots, 10 overcharged plasma gun shots, the output of a macro plasma incinerator, and 10 melta rifle shots outside of long range. The charts below show the resulting casualties, and we can immediately see that there is no case where the Death Guard became easier to kill. The only time in which the curves overlap is the macro plasma incinerator against Plague Marines, which aligns with the equivalent wounds calculations we did in the previous section. Everywhere else the additional wounds more than offset the change in Feel No Pain, with the added bonus of not having to make any additional rolls. 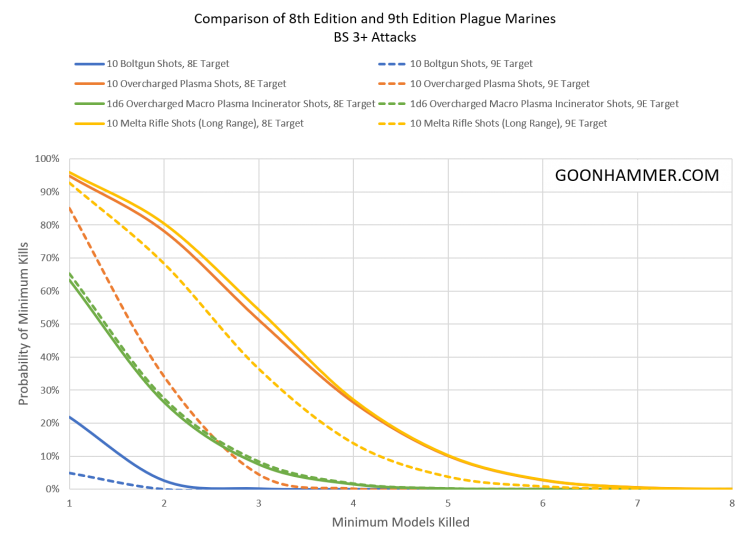 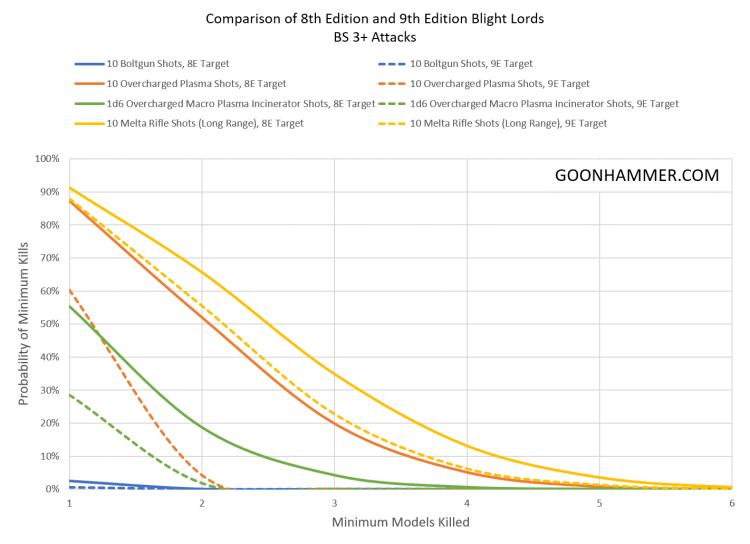 The new changes to Disgustingly Resilient are interesting, nuanced, and in my opinion very much appreciated given how many dice rolls they mitigate. Player fatigue is an important consideration for any modern game and taking out an element of rolling – particularly one which required players to take extra time to deal with multi-damage weapons and the possibility of them overkilling single models – is good.