This week’s Hammer of Math takes another look at Leagues of Votann, focusing on the options available to different units.

Last week, in what turned out to be fairly popular article, we provided a rather expletive-laden discussion on why multiple aspects of the Leagues of Votann rules were, frankly, bullshit. This week we’re taking a different approach and focusing on the various options available to Votann players (even the terrorists) and their armies. Please note that as it seems likely that at some point GW will make major changes to the core rules of this army, this article may be obsolete sooner than others.

Given the number of ways that an attacking unit can re-roll hit rolls, it might be worth exploring whether or not it is in a player’s best interest to re-roll a hit result to increase the chances of Eye of the Ancestors going off and triggering an auto-wound for an attack. The chart below shows the scenarios in which the probability of wounding by re-rolling the hit is greater than the probability of wounding by simply continuing the attack sequence.

The optimal decision depends on the roll needed to hit, but for the most common situation (hit rolls of 3+), you can re-roll anything that doesn’t trigger Eye as long as the wound roll is equal to or greater than the Eye of Ancestors’ target value.

The core Troops choice for the Leagues of Votann is the Hearthkyn Warriors. Defensively they have one wound, a Toughness characteristic of 4, and a 4+ save that benefits from Void Armour (reducing AP by 1 and preventing wound and damage rolls from being re-rolled). Offensively, the units have a BS of 3+ and have the option of either an Autoch-pattern bolter (two S4, AP-1 shots that deal 1 damage) or an ion blaster (one S5, AP-2 shot that deals 2 damage). One of the challenges with establishing which weapon is optimal is the fact that there are a massive number of variables involved. Not only do we have to consider the target (varying in terms of Save and Toughness characteristics), but with Eye of the Ancestors we have four potential scenarios depending on how many Judgement tokens the target has received. To address this we look at expected kills, which is similar to expected wounds but we look at it from the perspective of how the Damage characteristic of the attack compares to the Wounds characteristic of the target. This allows us to take into consideration how excess wounds are lost.

To read the chart below, first decide if the target has a single wound or multiple. Then find the target Toughness and Save characteristics along with the number of Judgement tokens, and look up the corresponding cell. If the value is blue then the Autoch-pattern bolter is the better weapon. If the cell is orange then the ion blaster is optimal. The number in the cell is the percentage difference in the two weapons divided by the expected kills of the inferior weapon.

For example, let’s say that we have a multi-wound target (lower chart) with a Toughness characteristic of 9. The target has no Judgement tokens and a Save characteristic of 2+. Looking up the chart we see that the cell is orange and the value is 200%. That means that the optimal weapon is the ion blaster and that it is 200% better than the bolter.

Click on the image below to make it larger and easier to read.

While I doubt anyone asked the question “What do you get if you tank an angry space dwarf, put them in augmented power armour, and told them the guy on the other side of the fortress gates insulted his mother?”, but the Einhyr Champion is the answer. This HQ is fairly hard to kill at 5 T5 wounds with a 2+ save (which is raised to 6 wounds with a 2+/4++ save if a Weavefield crest is equipped), that benefits from Void Armour as well as damage reduction courtesy of Exo-armour and a wound modifier from the RAM Shield. Offensively the model has two options for its 4 attacks that hit on a 2+. First, it can use a darkstar axe which doubles the number of attacks and prevents the enemy from ignoring lost wounds. With the baseline profile that results in 8 attacks at S6 with AP -3 and a Damage characteristic of 1. The other option is a mass hammer, which is basically a better thunder hammer that hits at S10, AP -3 and deals D3+3 damage while requiring the attacker to subtract 1 from the hit roll. On top of all of this the Einhyr Champion is so angry that when it charges it can inflict D3 mortal wounds on the charge by rolling a D6 and either getting an unmodified 6 or a result that is equal to or greater than the Toughness characteristic of the target.

Of course when it comes to marquee units like an Einhyr Champion it’s essential to consider the Warlord Traits and Relics that can boost them even further. With that in mind we have two builds to consider, courtesy of the Goonhammer Brain Trust. In both cases we can apply Ancestral Sentence to re-roll the hit roll assuming the target has at least 1 Judgement token.

For the target, let’s focus on the normally obnoxiously hard to kill Ghazghkull Mag Uruk Thraka. Ghaz’s profile is T7 with a 2+/4++ save profile, and normally he can only lose a maximum of 4 wounds per phase. But since the League of Votann’s convention-breaking rule trumps Ghaz’s convention-breaking rule the outgoing damage is uncapped. In both cases we’ll re-roll hit rolls, and per the re-roll chart in the first section the Ymyr build will re-roll any result that doesn’t auto-wound since the unit hits on a 2+. The Exactor build doesn’t need to re-roll since the probability of wounding given a hit is so high, but Shane Watts suggested exploring what happens if you re-roll anything that isn’t a 6 to increase the chances of inflicting mortal wounds. The results are below. 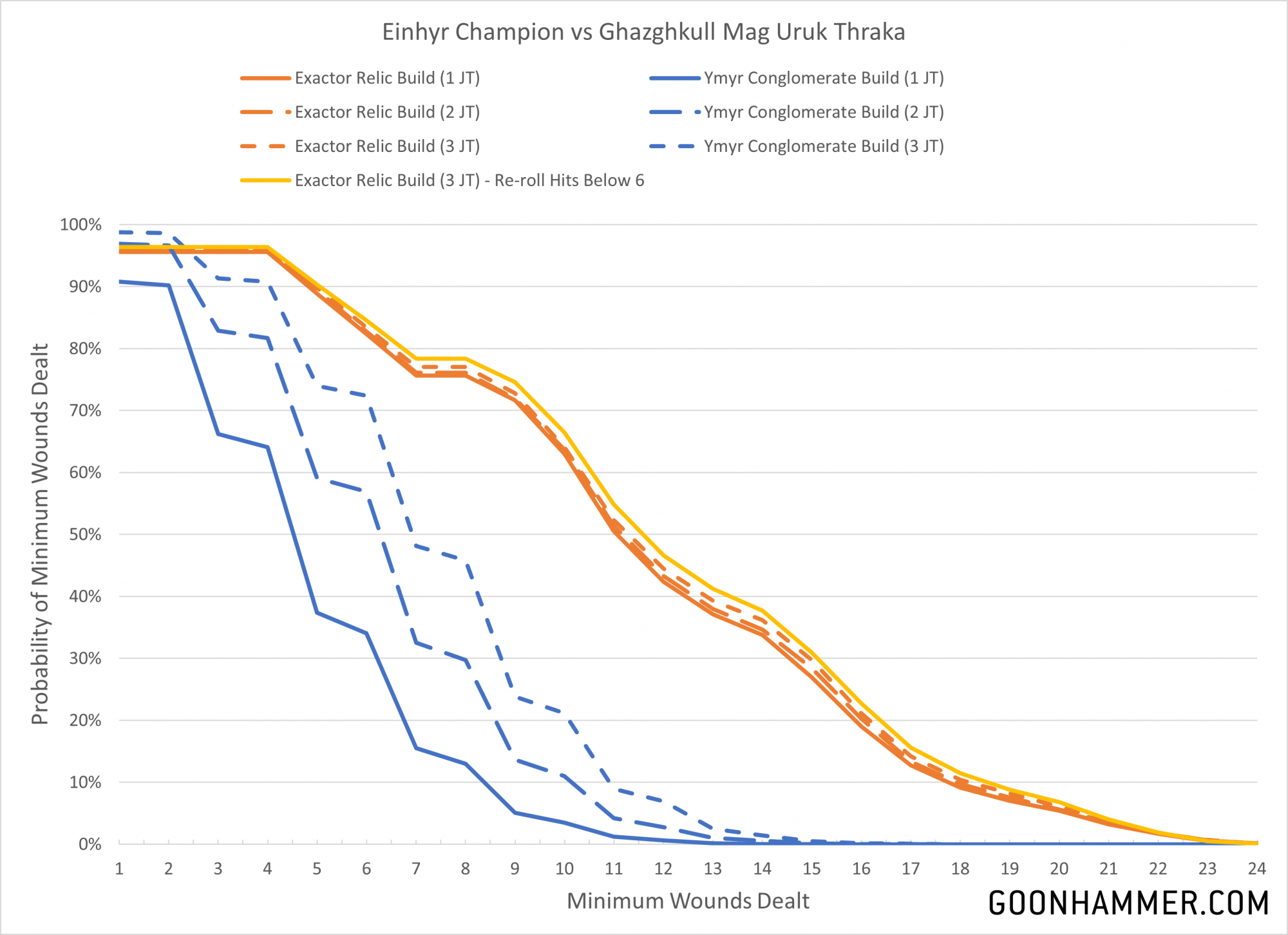 It’s difficult to say how much of this article will be relevant after Games Workshop ideally balances out the Leagues of Votann, but in the interim it’s certainly worth exploring some ways to optimize these insanely powerful armies even further. The nominal weapon choice for Hearthkin Warriors depends on what you expect to shoot, with bolters being better against single-wound threats and ion beamers being preferable for multi-wound targets. Einhyr Champions can pose a serious threat to a wide variety of units, especially when boosted with a large number of Judgement tokens, and the combination of Exactor and Warrior Lord is worth considering for those who want to lose the few friends they may still have.

Joking aside, I think it’s good to see Games Workshop expand the range and bring back a army with such an awesome and dynamic range. Like most things in Warhammer 40k the balance will shift over time as FAQs and Dataslates make major changes to the game. Armies that were garbage will become powerful, and armies and builds that were game breaking will fall to the bottom tier. The reason I’m saying this is because I see a lot of people debating if they should buy this army because they like the models but are worried about the criticism. If you like the army and want to paint it, do so! What matters most is that you have fun doing something, and if Leagues of Votann excites you then go for it. If you’re anything like me then by the time you finish painting the army the game will have already gone through two or three editions anyway.