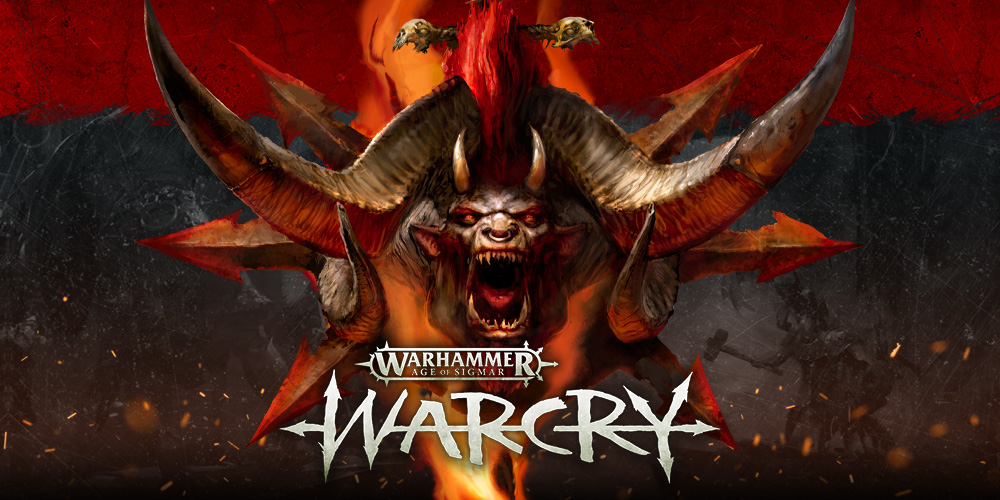 Gold. Axes. Butts. These are the things that define the Fyreslayers and now all three are present in Warcry. The quest for ur-gold—the shattered remains of the duardin god Grimnir—has brought the half-naked berserkers of the Fyreslayer clans to the Eightpoints. February’s issue of White Dwarf includes the fighter and ability cards needed to field these stalwart warriors, though unfortunately they are only printed in the pages of the magazine and not included as promo cards. 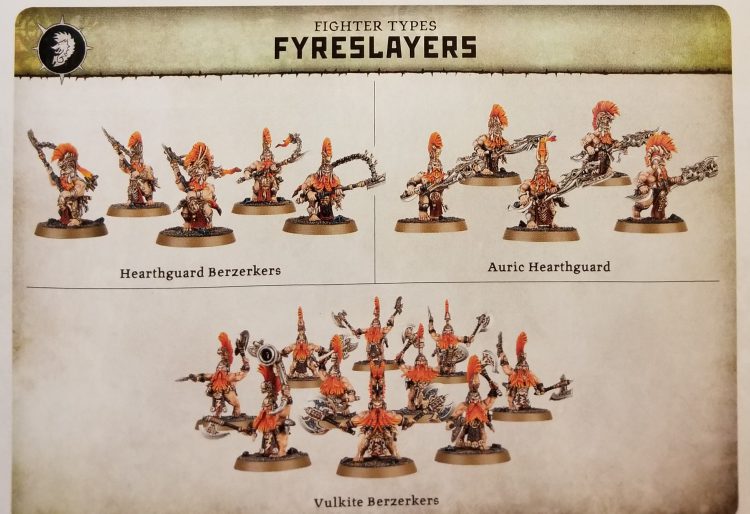 Fyreslayer warbands feature three different fighters, with a number of weapon options. Your basic troops are Vulkite Berserkers. They can wield handaxes, war-picks, or both. Alternatively, either can be combined with bladed slingshields for extra toughness. Elite warrior options are Hearthguard Berzerkers—wielding flamestrike poleaxes or berzerker broadaxes—and the ranged combatants of the Auric Hearthguard. The latter’s magmapikes are critical to achieving any sort of board control.

The Fyreslayers are a consistent warband. All three unit types have similar profiles: 12 wounds, 4 toughness, and a 3″ movement. Your leader can come from any of the three units and gets an extra 10 wounds plus a point of strength. Additionally, their ability list includes three universal abilities open to all fighters. Their Quad adds the value of the ability to their attack stat, giving the potential for an absolutely brutal round of combat. How does up to 20 Toughness 4 attacks dealing 2/5 damage sound? Two Doubles are also available to all fighters. Fyreslayer throwing axes are represented by a 2-dice direct damage ability. The most important ability however, is the one that adds 3″ of movement to the dwarf’s next move.

By far the most difficult thing about playing this warband is going to be how you deal with the universal 3″ movement. There’s no way to sugarcoat it, these are slow fighters. Board control is going to be difficult and controlling treasure is going to be damn near impossible. Leading these naturalists to victory is going to take clever use of their unit abilities and strong tactical command. 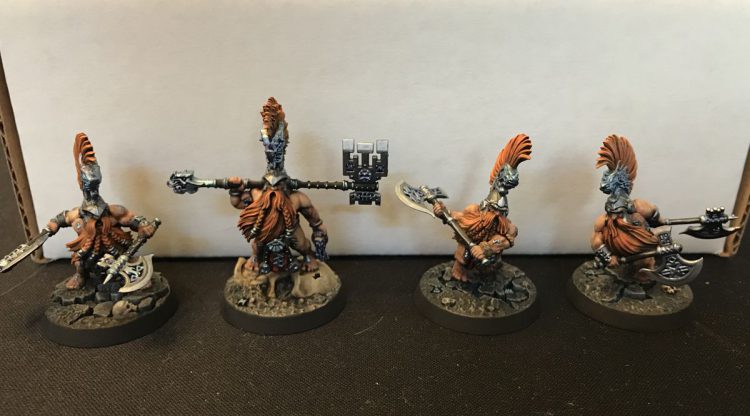 These Vulkite Berserkers come from Warhammer Underworlds, but they’ll do in a pinch. Credit: Raf Cordero

Vulkite Berserkers may be your chaff, but they’re no slouches. Equipping them with two weapons gives them 4 attacks to go with their high toughness and wounds, meaning they’re likely to survive an extra round or two. If you really want to push their survivability up a bit you can swap a weapon for a shield. With this option you’re essentially admitting you don’t need them to kill anyone, but together with their 32″ bases fighters equipped this way can really gum up the board—if you can get them in position.

Hearthguard Berzerkers are a more elite choice. An extra 20 points buys you a 2″ melee range and more damage on your attacks to represent your Flamestrike Poleaxes. 5 points on top of that swaps the poleaxe for a 2-handed berzerker axe that brings your attacks up to Strength 4. These warriors also have access to a special ability. If they’ve taken at least 5 wounds then a Triple will give them a bonus move and a bonus attack, an ability that’s sorely needed with these slow fighters. It’s worth pointing out that fighters are limited to 1 ability per activation; a damaged fighter can trigger this ability, take the Wait action, and still have the opportunity to use another ability when they’re activated again.

Finally, Auric Hearthguards round out the force. They aren’t much of a help in melee, but their 15″ range on their Magmapikes gives you the ability to do some damage at range. More importantly, a Double is all it takes to target an enemy and Encase Them in Molten Rock. This ability subtracts half the value of the ability from the move ability of your target, regardless of whether or not the ability succeeds. The fact that this only requires a Double is critical; you’re going to want to activate this early and often to help control the battlefield and bring your fighters into position. During the right scenario, this may be more important than the warband’s Quad ability.

The core of both of these lists is your Leader and 3 Auric Hearthguards. I’ve gone with a Hearthguard Berzerker Leader primarily because it’s the strongest offensive leader option. The leader ability for the Fyreslayers is a Triple that grants friendly fighters within 6″ an extra Attack. You’ll want your leader stuck in to take advantage of this, so may as well pick the strongest fighter. A Vulkite Berserker with 2 weapons is a good choice but it’s only a 15 point discount and that isn’t going to get you an extra fighter.

The 3 Auric Hearthguard are for board control. Put one in each deployment to maximize your coverage. These can focus fire on targets, or leverage their movement debuff to help give your fighters time to get in range. It’s technically stackable, meaning you could freeze out a single fighter with a good roll on the ability dice.

The other fighter choices are more about providing options than providing a focused style. 5 Vulkite Berserkers gets you to exactly 1,000 points and gives you the more bodies on the table. You can ramp up the attacks by swapping the shielded fighters for more dual-wielders. The first list packs a bigger punch with more elite fighters. Use your Shielded fighters up front and take advantage of the 2″ range on the Hearthguard Berzerkers to attack over your defensive troops.

There are no cheap units in this warband, which can make list-building a little frustrating as it can feel like you’re leaving points on the table. This does give you the opportunity to leverage thralls and allies, however. The first list has 40 points available meaning you could add a Chaos Fury as a thrall after your first dominated territory and not have to change anything else about your warband. You can similarly shake some points out by swapping the Auric Hearthguard with either Berzerker, or giving the leader title to a different fighter. The benefit of having a warband full of fighters with such consistent stats is that you don’t lose core utility by doing this.

Fans of the Fyreslayers should be happy with this release. This is a consistent warband with solid warband abilities and more variety than you’d expect given that it draws from only three units. For curious new players, Auric Hearthguard and Hearthguard Berzerkers are actually built out of the same box. This means you can get up and going with only 2 boxes and a copy of White Dwarf. Not bad for one of the non-Chaos warbands!