How to Base Everything: Beach Bases

Basing is a critical part of the painting process. Armies on the battlefields of the 41st Millennium or the Mortal Realms will find themselves fighting across a wide variety of terrain, from lush jungles to barren rockscapes, industrial wastelands to agrarian fields. Your basing helps tell the story of your army – where are they fighting and why? In the spin-off How to Base Everything series, we look at different methods for basing your miniatures, so that you can locate them in time and space. In this week’s How to Base Everything, we’re talking about how to do make bases that reflect your army storming the shores of a foreign beach.

Deserts aren’t the place to find sand. What if you want your minis to be storming beaches, coming out of the water? What if you want to do sand effects, but don’t want an army on drab, plain desert bases (though the monotony of desert bases is also kind of the point, really)? In today’s How to Paint Everything we’re talking about how to capture that look and fell on your models’ bases.

As we’ve noted in other articles on basing and painting, there’s often more than one way to approach these things, and beaches come in all varieties, from sandy paradise-style beaches lined by palm trees:

To rocky shores that are a bit less hospitable to tourists but no less beautiful to see:

Depending on the type of effect you’re going for, you may not even want blue or green water – your alien world might have beaches of a different color and be covered with all manner of weird flora. Or your daemon world might have rivers of blood washing on shores of skulls. Whatever the type of beach you’re planning, think about it ahead of time and take a look at some photos and reference materials beforehand to help understand how different types of beaches look and what’s out there. As always, Google Image Search is your friend here. The things you really want to look at are the color of the water and how it interacts with the shore – where does water pool, what the foam looks like, and how it affects the rocks and vegetation.

Also if you’re feeling particularly nostalgic, Bob Ross used to paint a ton of seascapes and you can catch re-runs of the Joy of Painting on Twitch these days, usually streaming on Fridays. A lot of the same color principles and tactics Bob uses can be applied to how you paint water, plus the show is just very relaxing to watch.

A couple of months ago I was featured in an army showcase for my beach assault themed tau army since then I have been iterating on the scheme, for the bases I have been working on achieving a balance between effort and appearance which I think I have struck for now! The biggest issue at the moment is that they involve quite a bit of waiting as there are a decent number of steps with long drying times. I would suggest working on them at the same time as the model otherwise it might take longer then the model itself.

For the jungle and ruins I used a mixture of GW Barbed Bramble and Gamers Grass temple bits, primed and base coated with Wraithbone. The ruins are just Basilicanum Grey dry brushed with Pallid Wych, the plants are a bit more involved since there is not really a nice dense green contrast paint. To get my desired colours with minimal effort I started with Creed, Militarum, and Dark Angels contrast once dry I tie the colours together with two coats of Athonian Camoshade before an aggressive drybrush of Ogryn Camo.

I sculpt the waves into the basing paste as the water effects I use are enough that the underlying shape will show through. For the shape, I prefer to drag the sculpting tool sideways through the paste at a fairly steep angle, while it does not give super realistic waves they are reasonably durable and quick to do. After the paste dries a basecoat of Pallid Wych then a wash of Agrax and drybrush of White Scar.

The Vallejo Still Water effects are primarily tinted with Sotek Green but to give an implication of deeper water further offshore I used a touch of Stegadon Scale Green blended in. The water has a pretty long working time so you have plenty of time to get the blend smooth. If the colour or opacity is not quite right you can add a touch more effect or paint on a cheap palette and blend it in on the base, remember to account for being darker after drying! When you are done I would suggest leaving it overnight to avoid messing up the surface when drybrushing the wave crests.

The crests are painted on using a drybrush loaded up with enough White Scar to create streaks, this makes a nice foamy water look and hides the basing paste peaking through the water effects. 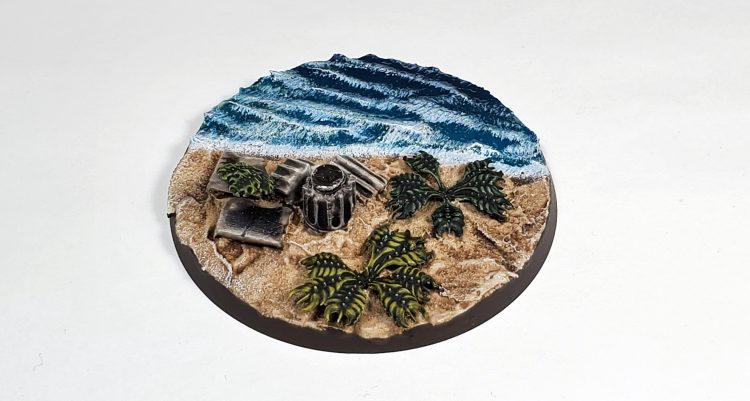 Finally clean up the rim with Dryad Bark then perch your model upon the base and voilà! 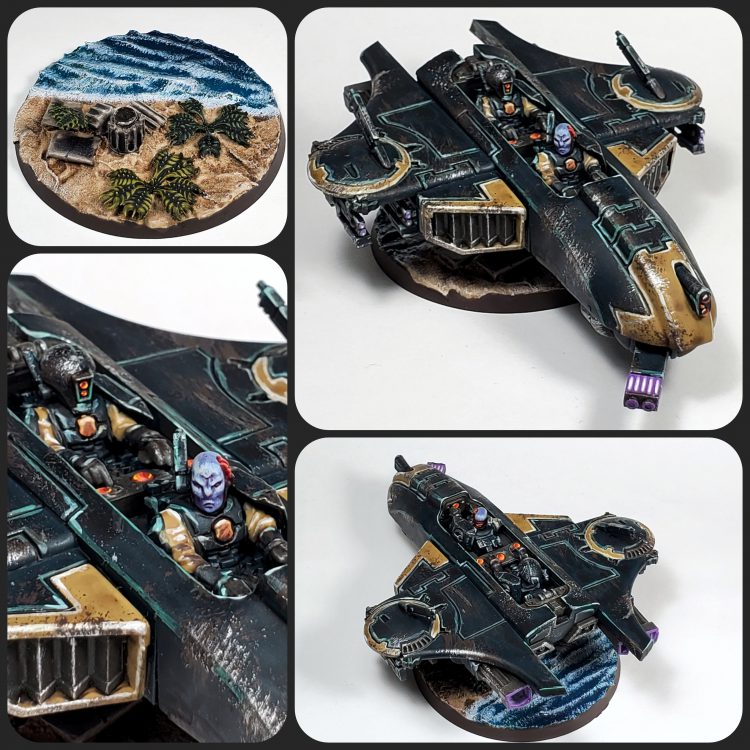 Have any questions or feedback? Want to show off your own water bases? Drop us a note in the comments below or email us at contact@goonhammer.com. Or head over to r/goonhammer to discuss.