How to Paint Everything: Infinity Nomads

In our How to Paint Everything series we look at how to paint, well, everything. We look at the different factions of various games, their heraldry, and different techniques for painting them from different artists.

Infinity’s Nomads are one of the most iconic factions in the game – they’re a group of spacefaring anarchists and hackers who got fed up with the corporate and AI-run societies of the Human Sphere and took off for the open stars. They’re housed in three massive motherships that travel between systems, trading with other cultures as they roam the stars. The Nomads are split into three separate factions based on the ship they hail from:

Official paint schemes for the Nomads often involve a red, black, and white paint scheme but there are a number of different ways you can go with them to show off their diversity.

I’d like to preface this by saying I’m an idiot and really love painting Infinity models as bright and obnoxiously cyberpunk as possible, so I’ve painted a lot of my Nomads with white as the dominant color on their armor. This is what is known in the business as a ‘Bad Move’. I really enjoy how it turns out, so I’m going to continue doing so, but going with a more traditional black and red scheme with white accents will go much faster than spending… oh… four or five hours carefully building up white on a Kriza Borac. The upside to the majority white scheme, though is that once the white is done, a few details in various greys and black and some splashes of color finishes a model up quite quickly.

That said, I’ll be presenting all the elements present in a more traditional Nomads scheme, I’ve just included them in different proportions and added orange into the mix.

Blocking Out and Planning

This is a very important first step if you’re painting a model in your own scheme, which I highly recommend for infinity models. It’s quite fun. Put the colors you want to use on your model down, and make sure they work. You could do this in Photoshop, but I just combine it with the basecoat step. This model is a Hellcat from the Nomads Action Pack.

A lot of Infinity models have elements that they share with other models in the range. In this case, a lot of the Nomads Light and Medium Infantry, especially from Corregidor, share essentially the same pants, boots, and basic torso armor. On my Alguacile line infantry, I’ve already established the boots as grey with white armor and the cloth of their pants as this scheme, with the outer panel white and inner panel orange, except for the strip around their thighs where the colors are reversed above a black strip.Their torso armor is Black, with Grey soft armor beneath it and a few select white panels. Keeping these elements the same between models can lend a lot of coherency to a force, and make it look like your elite troopers are using the same equipment as your basic infantry, just with extra kit piled on.

With those basics laid down, I filled in the rest, playing around with the basecoats and changing several things before finally deciding on a color scheme I liked. It’s easy to change colors that don’t work now, before you’ve put in a ton of work on them.

I’ve been enjoying playing around with painting a lot of texture on model surfaces. This has several big advantages. First, it effectively blocks out big volumes and flat areas without getting boring. Second, and most obviously, it adds a lot of wear and visual texture to the model. Third, when painting white, you aren’t fighting the transparent and uneven nature of the paint, but embracing and using it. A textured finish is also much easier to patch up later if you make a mistake, enough so that I can pretty fearlessly freehand black markings onto white without worrying about making a mess of it.

I use the same steps and paints on the white cloth, just forgoing the scratchy highlighting and applying the paint more smoothly.

I approached my Black with a similar approach to the white, albeit with a lot more mixing. I don’t have exact ratios, just what looks ‘right’. When painting black, in order for it to read as ‘black, you have to make sure to keep most of the area in the very dark grey to black range, with lighter colors only on the edge highlights. If too much grey creeps in from the edges it starts to look grey.

The Orange is simple enough I haven’t included a step by step pictoral guide for it, as the only tricky aspect is covered in the white guide.

If I’m painting the orange as a stripe onto white armor, I will instead scratch it up with Ulthuan Grey and then hit any edges with a few dots of VMC White to tie it in to the rest of the white armor. This works particularly well if bordered by thin black stripes, as the white and prange blend together slightly without a border. You can see an example of that on the Mobile Brigada below.

And so, the Hellcat is done. These elements can be mixed and matched easily to create a striking scheme on a variety of models. Just remember to plan it out first, especially if you like obnoxiously bright schemes like I do. Otherwise they can turn out too obnoxious.

So I said I’d be showing you all the elements of the classic nomads paint scheme. But there’s no red on that hellcat. My corregidor is leaning heavily into the orange side of things, but for Tunguska, with their evil banking ways, I feel the traditional red is very fitting, and I’m including a lot more of it into those models. For this Grenzer, I’ve basically swapped red in for orange on his pants, and added red accents to his armor, leaving just little hints of orange to unify the two groups.

The red is a fairly simple process:

For stripes on white armor, I treat it similarly to the orange from before. I apply VMC Burnt Red, but instead of washing it, I highlight straight with Evil Suns Scarlet, then chip with Ulthuan Grey and White.

If you’re painting red armor, the same steps as the red cloth can yield a good result, especially if you use similar techniques to the white armor from earlier. You can either highlight with a red-orange, or, if you want to do something different, highlighting with a very thin and scratchy edge highlight of light Grey such as VMA Light Grey can give your red armor a very different and battle worn appearance like the box at this Kriza Borac’s feet. This works particularly well if the red armor is the dominant color on the model.

In all fairness, I settled on painting my Nomad army as ‘space cops’ years before O-12 was announced. I was inspired by the classic ‘Blues’ police uniform and the 1960’s police cars you’d see in films (such as the Ford Fairlane and Chevrolet Caprice), as a cute play on the classic Nomad anarchist theme:

Preparation: Prime black and then zenithal highlight grey (not only to make the primer and bit more colour-friendly but also to help draw out how light plays over the model).

Shirt: Basecoat a high saturation blue (classic GW Enchanted Blue, Game Colour Electric Blue 72.023), highlight with Citadel Baharroth Blue, then further highlight with a 50-50 mix of Baharroth Blue and any Matt White you fancy. A blue wash (Army Painter Blue Tone again) will bring out the grooves in the shirt.

Weapons: Basecoat with a hard/pure black (Chaos Black, Abaddon Black, Army Painter Matt Black, it’s all the same), then block in/overbrush with a Heavy Charcoal. Fine highlight with a mid-tone grey (Dark Bluegrey again, multiple successively lighter highlights if you’re keen). Unlike the vest/body armour above we’re going to add fine-point pure white highlights to the weapon because the material (plastic or metal) is more likely to carry a reflective sheen than a cloth/fibre material one might expect from clothing (any Matt White is fine). We also throw some white into the magazine ‘bumps’ and the ‘button’ that appears to be sitting where an ejection port would nominally be. Next we blue wash (…and Army Painter Blue Tone once again) the weapon to tint it somewhat to differentiate it from the vest/body armour on the model (which, incidentally, is often visually adjacent to the weapon) as well as throw some red (Model Colour Flat Red 70.957) onto those bumps and buttons we previously painted white. Finally, we come back to the fine-point highlight with dots of white (as the previous highlight would have been tinted blue by the wash), and drop some white dots onto the red sections to lend an impression of ‘glow’ to them. 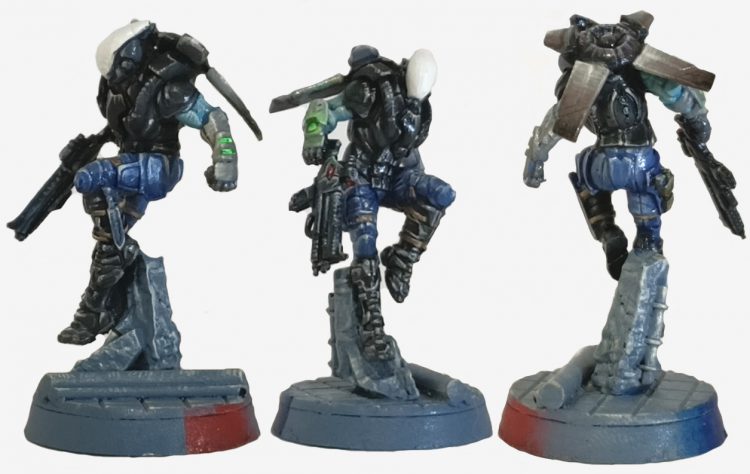 If you have any questions (or compliments, back-handed or otherwise), please don’t hesitate to comment below, or email us at contact@goonhammer.com.