My god. What happened? Has it been a year? WHAT YEAR IS IT? WHAT HAPPENED?

I seem to remember having a pretty fun January and February, and then blacking out into some sort of coma, and waking up surrounded by painted resin and plastic models, twenty pounds heavier, one bout of COVID-19 down, and having not seen most of my gaming buddies in person for almost a year.

Nurgle is one hell of a drug.

Let’s not linger on the unending hellscape that was real-life 2020 (which is spilling over already into 2021); instead… let’s look at the Warhammer side. As, frankly, that was pretty damn good, all things considered.

So, looking back at my previous year – when I was just starting out as a Goonhammer writer – I had a number of goals for 2020:

The 3D printer was working. It was working great. Then it had a resin spill, so it’s sitting pending repairs. So we can strike that one off, sort of. I’ve made some great stuff on it:

The Zone Mortalis Board is now built, and all the existing walls are painted, but I still have a vast quantity of MDF to insert magnets into, and paint up. So that’s a half-win, but not as much progress as I’d hoped:

In fairness, it hasn’t exactly been the kind of year where I can look forward to games to motivate me to make terrain.

The Cityfight board… sadly, an abandoned project. I really wanted to get this off of the ground, but I just don’t have the chops or patience to do a full sized board of custom building. So, OK, that is a fail. I am compensating by picking up a Realm of Battle board from a friend of mine, which I will then cover in Titanicus terrain, as opposed to build the board from scratch.

Now the backlog… this has gone, shall we say, rather well. What have I completed this year, you ask?

Gaze upon my works, ye mighty, and despair.

Titanicus has suffered badly by not having any games, sadly. However, I think it is going to be big in 2021 (see what I did there), and I urge everyone to read the amazing Goonhammer Warlord Wednesdays series.

I still have to deal with this in 2021, as the Surturvora need finishing. However, we’re talking fewer than 10 models, so I am optimistic.

That’s right, a game which no-one really plays (including me). I did, however, I have a hell of a lot of BFG lying around from some eBay purchases, and thought it was time to do it all justice, even if just to put it into a display cabinet.

This is the Geryon Deep Retribution Fleet, fitting in with my Horus Heresy Salamanders Legion force (detailed more below). I have an Emperor Class Battleship still in pieces (metal is a pain, and balancing it on a tiny flight stand is like some sort of punishment designed by the Dark Gods), and some odds and sods, but these are cleared from the backlog, save these last pieces.

Another project which I had lying in boxes from Mierce Miniatures, the Daemons of the Ruinstorm are a fun little side-job I decided to work through. I went for a slightly eerie aesthetic, sealing the eyes of the Daemons shut with green stuff before painting them to look like they had bone helms. Inspired heavily by Doom!

All in all these are nice, but I have yet to play with them, or settle on a Lesser Daemon scheme that I’m happy with.

I have some very blood-soaked Nighthaunt colour schemes saved in a folder, but at present until games pick back up, I think these guys will languish for a bit until I can get around to repainting the two bigger demons which need to be resprayed.

A… mixed bag. I abjectly failed to complete the ZM table, but I did manage to get a 3×3 section and all the walls done – so it is just the remaining 1×1 which needs dealing with. So not too bad!

I also managed to do a set of Promethium Pipes and Munitorum Barrels/Crates, which are great little kits, and really add some character.

I also bought some plaster-cast ruined titans for Titanicus, which look neat!

I think 2021 is going to be a year where I expand my terrain collection, as we start to play games again.

The Enginewards had a quiet year, being more or less “complete” as an army:

I did flirt with the idea of some more Veletaris Storm Sections and Aurox, but at the moment with no games on the horizon I’m going to let it lie.

A good friend of mine decided, in lockdown – as many people have – that he was interested in re-exploring Warhammer. His long-suffering fiance might now regret it, as he wanted to do 9th edition Necrons, and Indomitus came out and flooded the market with cheap robot men!

To complement this, I decided to pick up some plastic and OOP Tyranids and see about having a bit of fun with them. I did a green akin to my Salamanders, but decided to push my basing chops a bit with water effects and a “forest” vibe.

Great fun. I have yet to play 9th due to ongoing lockdowns, but when all that lifts… I’ll definitely give it a go. I’m still a Heresy enthusiast at heart, but want to see what all the fuss is about.

Now… this is my “main event”, as it were. When I started 2020, I had a handful of these done – mainly some Firedrakes, which I was pretty pleased with.

Then lockdown rolled around, and I found I was locked up in a house with nothing but time, resin, and green paint. 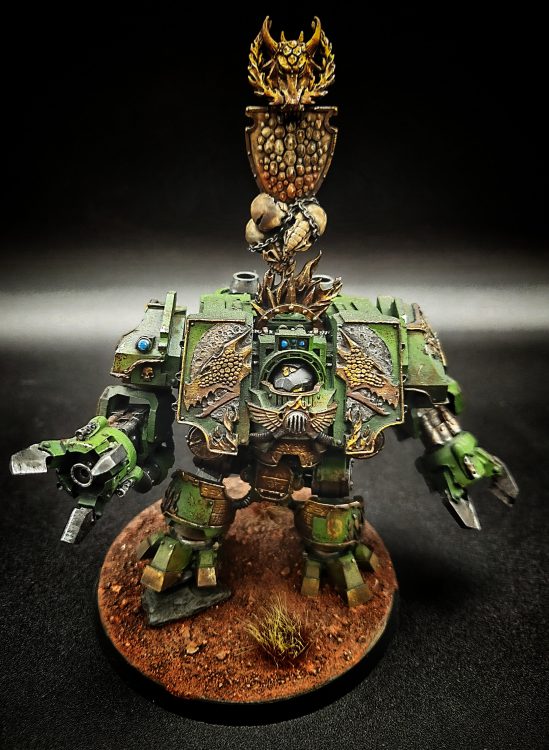 I used this time to build a Legion.

3 Drop Pods, 5 Dreadnoughts, 85 Infantry, 20 Terminators, a smattering of HQs, and a bunch of vehicles to accompany them. Phew!

One thing is conspicuously missing from this list – the Mastadon!

I tried to assemble this in June, and unfortunately had a mis-cast kit. Forge World replaced it, but I haven’t been able to face it yet. It’ll be a 2021 project, for sure; it is a magnum opus and deserves serious time.

I also took the time to write some fluff about my Salamanders, as a homage to the brilliant Heresy Black Books – it can be found here, and I intend to bring hard copies to events when they open back up again post-pandemic.

So, what is in store for 2021? A lot, of course, depends on the global health situation. Assuming the vaccines roll out and the Apothecaries can do their work, then I have the following goals:

Everything else, in times like these, is just a bonus.

Fully Painted is for Closers.