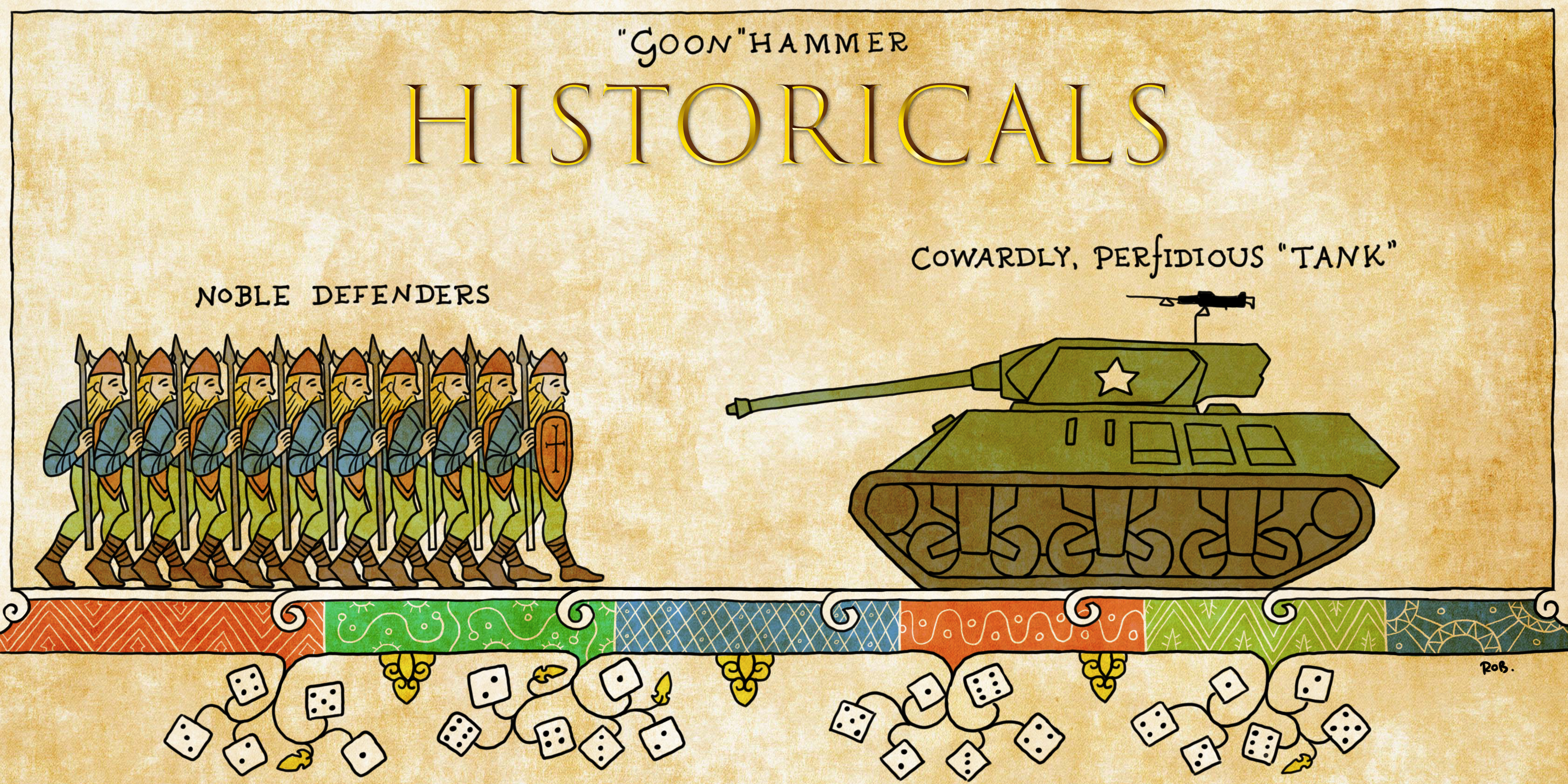 This week in the Goonhammer Historicals series, we continue our focus on the Viking Era with a look at Victrix Limited’s offering of plastic Vikings in 28mm scale.

Disclaimer: I paid for these minis with my own money, and Victrix was not involved in this review any way.

Victrix Limited has a long reputation in the historical miniature wargaming hobby, with a wide range of high-quality Napoleonic offerings in both 28mm and 54mm scales. So when I heard that they were going to be doing 28mm Viking warriors in plastic, I couldn’t resist, and bought a pack as soon as they were available.

Unlike the gorgeous box art on the packaging of miniatures from companies like Perry Miniatures, Victrix’ Vikings come in a no-frills package: a clear, heavy-weight plastic bag with a stapled cardstock topper that allows them to be easily hung on a peg at your Friendly Local Gaming Store (more on this cardstock later). Fortunately, what’s inside the bag more than makes up for the initial presentation.

The contents of this set (VXDA001, for anyone wanting to search for it by stock number) are comprised of 6 sprues of warriors (with 8 warriors per sprue) and 2 “command” sprues with six warriors each. This makes for a whopping 60 miniatures in all, which given the retail price of only £38 is a pretty good price-per-figure. The miniatures themselves are fairly realistically proportioned, with those torsos which are armored generally being bulkier than those which are not. Overall they are maybe a hair bigger than some of the other 28mm miniatures I’ve worked with over the years, but not overly so, and certainly not enough to be noticeable at tabletop distance.

Looking at the warrior sprue in more detail, the main portion of each figure is a combined torso, legs, and some portion of the upper arms (generally ending at the point where a mail coat or surcoat’s sleeves end. Of the 8 torsos on each sprue, they are equally split between those with chainmail byrnies and those without. This is great, because if you’re playing a game like SAGA or a Viking variant of Dux Britanniarum it will allow you to easily distinguish between regular warriors and more heavily armored huscarls, for instance. The poses themselves are very dynamic, with varying levels of stride, torso-twist, and upraised or outstretched arms. 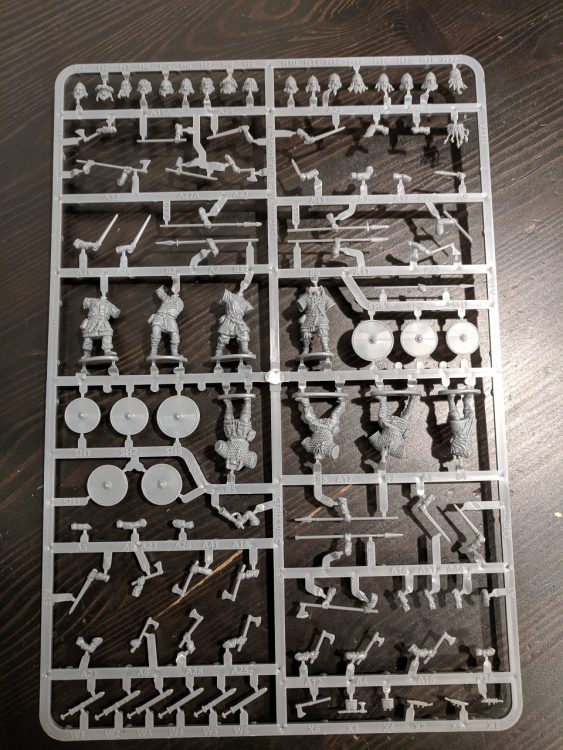 The kit includes six of these Viking Warrior sprues, each containing 8 bodies and a ridiculous variety of arms and heads. Note the numbers at various locations on the sprue frame – these will become important later.

Further, lest you worry that only having 8 basic torso/leg combinations would lead to a repetitive-looking set of minis, the real magic comes from the absolutely ridiculous quantity of different head, arm, and weapon combinations. There are 12 arms with hand-axes, 7 arms with swords, 2 with long knives, 7 with spears, one hunting horn, and three different combinations that give you a two-handed axe. In addition, there are 17 different heads and 8 shields of varying sizes (along with a dizzying array of arms to hold them. Further, while the majority of the weapons are in right hands or arms, there are a fair number of left-handed weapons as well, so if you want to have your Viking warriors sporting a pair of hand axes, Victrix has you covered. Finally, there’s a good assortment of bits and bobs like extra knives and swords in scabbards or axes on belt loops. The heads give a wide range of period-appropriate looks – shaved heads, long hair, braids, beards, braided beards, and historically accurate helmets (mostly metal caps, many of which have a nase or speculars – and not a single horn or wing to be seen, thank goodness).

The “hero” sprue is similarly arrayed, with the added benefit of one set of torso-less legs that can accommodate one of two different different upper torsos – one with upraised arms and one with arms in a more at-rest position. Additionally, this sprue gives a bunch of extra optional bits like capes and wolf-pelts and a pole suitable for a standard. This is great for troops you want to distinguish as your leaders and champions.

The sculpts themselves are very nicely detailed and the casting quality is quite good, with all the little buckles and stitching and clasps and whatnot clearly visible and having good relief that make them easy to paint. The relief depth on the chainmail is crisp and deep, which makes dry-brushing the armor a breeze. My only complaint here is that the chainmail pattern itself exhibits a slight variation in size across the model. This is probably the result of whatever CAD program was used to sculpt the miniatures “stretching” the texture pattern across the mini. It looks a little weird up close, but at tabletop distance you don’t really notice it. 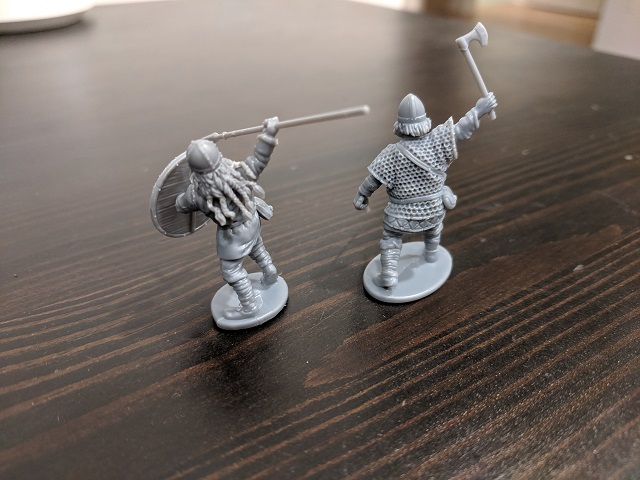 A pair of Victrix Vikings assembled. Note the dynamic pose of the spearman, I love the way this guy looks. On the warrior on the right, you can see the weird chainmail effect – when viewed up close, the holes of the section above his belt are noticeably smaller than those below his belt.

There is one other caveat here though, and that’s that the weapons are more or less accurately proportioned to the figures. If you’re used to chonky Space Marine Power Sword blades or thicc Thunderhammer hafts, this ain’t it. You’ll want to be a little careful when clipping weapons off the sprue, and I accidentally broke one of my assembled warriors’ swords mid-blade when I got it snagged on something. Fortunately, plastic cement creates an extremely strong bond and I was able to re-attach it without issue. Still, it’s worth being aware of, especially if you’re coming to this kit never having worked with more realistically proportioned figures before.

In terms of casting quality, these figures are quite good. While the mold lines for most of the sprues are minimal, I did have one basic warrior sprue that was noticeably worse than the others. It still wasn’t bad, though, and cleaned up with a hobby knife and file very easily.

But we need to talk about the elephant in the room, and that’s the assembly directions. Or rather the lack thereof. See, this was my first exposure to assembling Victrix’ miniatures, and I was not prepared for their particular “style” of doing things. Normally one would expect some sort of pictorial instructions indicating how things go together, but no such directions are present here – and that is by design. Remember that cardstock hanger tab at the top of the bag I mentioned earlier? It had some words on the back, but didn’t look important, and I promptly dumped it into the trash-bin next to my hobby desk. What I did not realize at first is that those “words” actually are the assembly directions, or rather an encrypted version thereof. You see, each piece on the sprue has a code – B for bodies, H for heads, and A for arms, SH for shields, and so on. And some of the bits (but not all) are designed to fit specifically with other pieces (such as two separate arms that combine to make a two-handed axe that in turn fits only one of the torsos). Thus, the text on the hanger cardstock indicates (in its own coded way), which arms or heads are most suitable for which torsos. And at least on mine, there was an error (one of the two-handed axe arm combos was tagged to the wrong torso), which led to further confusion.

Don’t, uh…don’t throw this part away.

I of course didn’t realize this at first and went about happily clipping off arms to stick to torsos willy-nilly. Then, when I went to glue them on I thought, “wait, that doesn’t look right.” Because for some of the torsos, the arms end above the elbow and some end below it. So if you try to attach a torso that ends below the elbow to an arm that ends above the elbow, you get a Viking with a two-elbowed arm. While this might be a fantastic advantage in a sword-fight, it looks really weird and wrong. While a handful of torso and arm combinations are specific (body B2 has a full right arm so weapons with just a hand – A6, A9, and A10 – fit without modification), the kit does include this helpful tip: “Some arms work better with certain positions or sleeve lengths on the figures. Test the arm pose on the miniature before gluing.” Clearly I should have read that bit first. Fortunately, I had not emptied my trash bin and was able to rescue the instructions.

The last caveat here is that like most plastic models, the code of any given piece is printed on the sprue, not on the piece itself – once you separate arm A20 from the frame, you have no idea that it’s arm A20. As shown above, I ended up taking a high-res picture of each sprue type (warrior or command) for reference such that I could match up pieces later if need be, though now that I have the knack of assembling these guys I haven’t yet needed it. 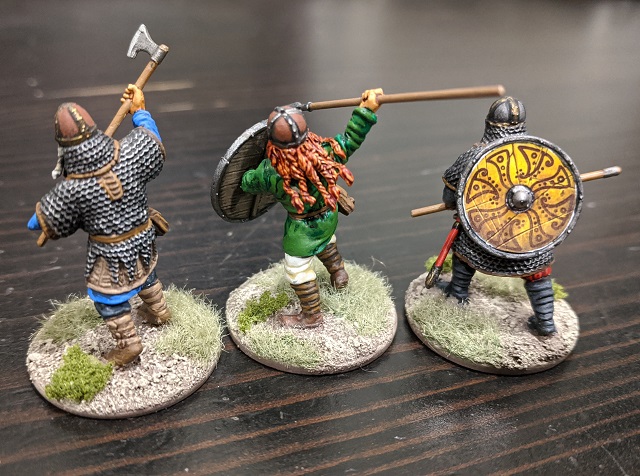 Close-up, you can see some of the fine details in the sculpts (like the braids, the texture of the padded layer under the armor, belt bucks on the bootstraps, etc) and the variations in stance and pose.

Regardless, once you figure out what’s going on, it’s fairly easy to get body, arm, and head combinations that look good. Further, because the models are plastic, you can do a little cutting or filing to make most of the options fit, and the resulting variety is pretty staggering. And that’s all before you apply any paint to them, which can further differentiate individual warriors visually.

A small band of rough-looking customers fresh out of the longboat! You can really see the dynamic poses and variety you can get out of this kit. The shields are transfers from Little Big Men Studios, which are conveniently also available from Victrix’ online store. I highly recommend them as well.

Even accounting for the dubious “directions,” overall I think this kit is great. And were it just basic miniatures it would still be an amazing value, but the sheer quality of the sculpts really makes this a next-level offering. Additionally, because there are just SO many options for heads, arms, hands, and shields, you’ll likely end up with loads of spares in your bits box. Further, while this was Victrix’ first foray into the Viking Era, they have since released a number of other Dark Age plastic miniature sets (such as Saxons and soon Normans). These sets are designed along similar lines, and many of their bits are cross-compatible. And the fact that you get 60 miniatures at one go is great for anyone playing a skirmish-level game – where it’s possible to get two full opposing forces out of a single kit. If you have any interest in gaming the battles of the Viking Era, this offering from Victrix should be at the top of your list.