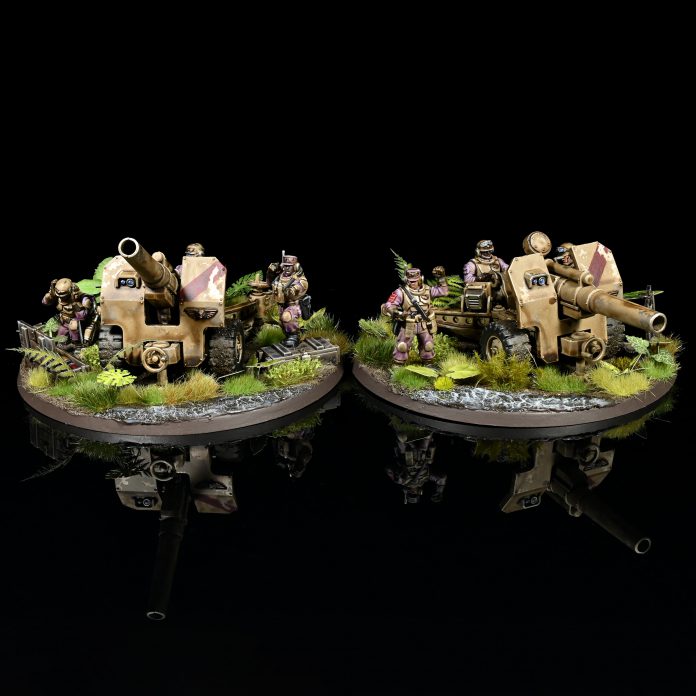 Today marks the release of the Cadia Stands army box, a new boxed set for the Astra Militarum that includes the 9th edition codex and a host of new plastic models for the faction. We’ve already talked at length about the rules, but if you wanted to know more about the models and how to paint the new models for our favorite space army duders, we’ve got you covered in today’s article.

Before we get started we’d like to thank Games Workshop for sending us a preview copy of the box for review purposes.

Scott: These models are of amazing quality, but that’s just what you can expect when you’re updating a model that’s nearly two decades old. All of the kits are largely monopose style with some very slight variations, but I suspect we’ll have a release with a more pose-able stand-alone box later. Some arms could probably be swapped between bodies with some work, but certain rifles have indents that are going to prevent that. Every single model looks like they’ve been taken from still frames of American GIs in World War 2 action movies. Rockfish hits on this below, but the average trooper has 9 parts to it. So if you’re planning on building and painting these at scale, like every Guard player ought to, prepare your body for more than a few grueling weekends.

Scott: The Command Squad doesn’t differ in quality from the Shock Troopers, but it does come with extra special weapons that you might be able to fit onto other troopers if needed. As this is a largely monopose kit, the poses for each member of the squad are going to be pretty restricted unless you end up using an alternate loadout for repeated models. They’ve been upscaled to 28mm bases rather than 25s to differentiate them a bit more from your line troopers.

These have some fun sculpts and poses that are going to spice them up a bit more than your line troopers. Vox Caster Guy and Medic Guy have way more detail than Guardsmen have any business having.

Jack: These are the only models I’ve had a chance to build so far, and I’ve got somewhat mixed feelings. As far as model quality goes, they’re outstanding. Five absolutely fantastic models. Building them went fine, nothing was particularly complex to make fit and you’ve got loads of head options and a few special weapons.

My problem with them is the sheer amount of detail. This isn’t a squad that costs a whole lot of points, and particularly the vox operator and medic have amounts of detail I’d expect to find on a marine character that. On the upside, you’re unlikely to take multiple of this squad, so you’ll only have to grind through once, and they wont be obviously repeating in your army.

Fun little kit to paint, exactly once mind you but thats mostly because these are very dense models with a big ass flag. Fortunately I don’t really see a need to do a pile of these, I guess you might do a few alt loadouts for stuff like the veteran and the commander but that’s about it. 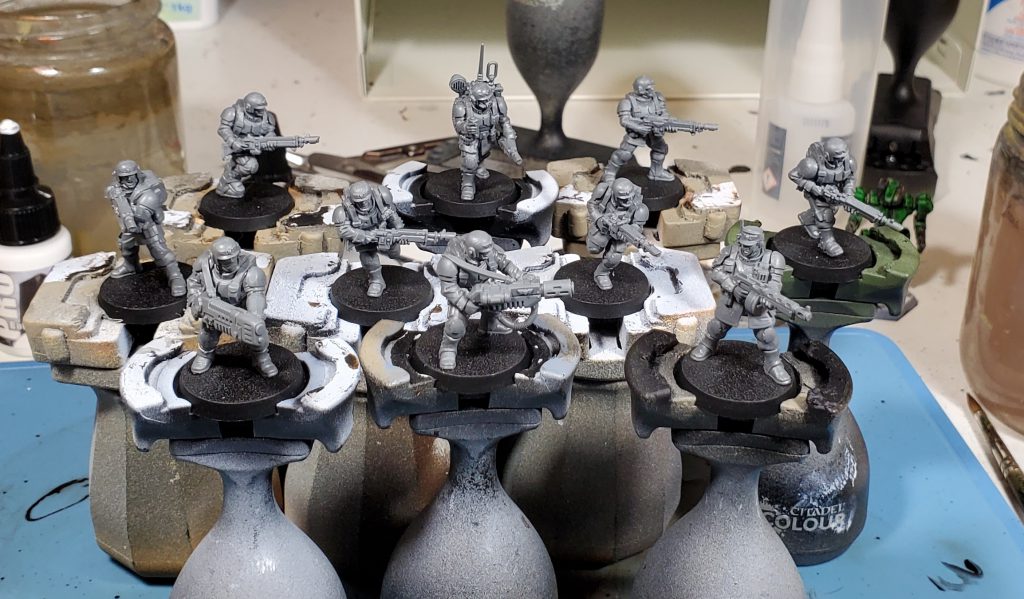 Rockfish: I’ve only had the time to get these built, so no nice pictures here but I still have thoughts on these models! They are all in bigger than life war movies stances, with the first instances of a few interesting poses I’ve encountered, like the one that is mid stride with a little tuft of something as the connection point. While there are a million wonderful head options that probably include some of the best faces GW has ever put out, you won’t be finding as many choices on the rest of the kit. Most of the models have a alt loadout in the instructions but its usually the special weapon or throwing a grenade. I haven’t had a chance to test but the weapons seem to be locked to poses, which might mean you might be feeling the repetition once you get into doing your sixth squad of them.

Oh! I forgot you do get one other choice on each model. You can chose to give them a bed roll on the majority of the models, soooo that’s something.

The build was pretty good despite being a lot of pieces per model, everything fit together securely even while the glue was setting which is something I have seen on some other GW infantry models. (I really wasn’t enjoying how many of my MkVI marines had their guns drop off when I looked away.)

Rockfish: Ok, so since I wrote the above I managed to finish off this squad. Pretty happy with them, but I will say they are dense models for six points a pop, I am sure I will be wishing for the sweet release of death by the hundredth.

Scott: I’ll echo what Rockfish said above. These Troopers are amazing from a modeling perspective. They largely fit together well, but due to the complexity of each model, assembling and painting 60 to 90 of these is going to be rough. My favorite update comes from the Shock Trooper Sergeant, who’s now heroically toting a Space Tommy Gun.

If you’re allergic to painting faces, I’m sure you could find some decent head swaps for these. A few models very noticeably have their sleeves rolled up, so you might need to get creative if you’re trying to dodge painting flesh at all.

Rockfish: Now this is something that you used to have to look into the forgeworld range to get for the army, big gun batteries not on a vehicle! These are each a mini diorama loaded with a decent number of options off the sprue, you can chose from a trio of different weapons for the carriages and each of the accompanying models have arm options that are model non specific along with a good assortment of heads.

Minor thing I will mention is that I notice that they have no horizontal transversal on these guns. I have a feeling that would be a ‘realistic’ detail to have but that would probably result in less clean of a design so I don’t mind over much.

The build on these is mostly pretty good, the legs are weird though. Scott Note: The gunner absolutely has the weirdest leg bits I’ve ever seen on a model. The instructions have you putting each on before the back of the torso, but that didn’t quite work for me. My suggestion is to fully assemble the torso and then insert each leg as a weird puzzle piece.

Scott: These are absolutely my favorite models in this box. They just… look… soooooo… GOOD. I love me some non-self-propelled field artillery, and we’ve finally got it in plastic.  They look about the right size relative to the footprint of the Shock Trooper squads. Rockfish noted that their biggest realism issue was that there’s no horizontal traversal to these guns, but I’m just absolutely tickled that the gunner is sitting right behind the breechblock. My dude is gonna get absolutely annihilated every time we fire these howitzers. With a little bit of work, I’m confident that you could covert these to be crewed by other regiments.

Note: you can technically build these as Heavy Lascannons, and Malleus Rocket Launchers, but don’t. You’re a self-respecting Guard player, and you ought to reach directly for the Howitzers. Every. Time.

Rockfish: If the words ‘Sentinel Legs’ gives you a bone deep fear of assembly, know that you can see peace with the new kit. Probably the most dramatic redesign in the box in my opinion, while you can recognize all the other units as being straight forward iterations on the existing models, the Sentinel sees a significant departure from the past. The legs are probably the closest visual element with everything else striking the same notes but with a distinctly modern spin.

On the building side of things, this kit is substantially more straight forward. You will see things that have appeared elsewhere, like the legs being designed similarly to Admech Ironstriders or the new chaos armigars such that the kit allows for a choice of which leg is forward. There are a couple of things I wasn’t too enthusiastic about but are fine and done for practical reasons, the main one being that the cockpit is still a bunch of pieces that you have to be careful not to let gaps appear in. This was needed to allow for the enclosed/open cockpit, so I don’t really see how they could have avoided that. 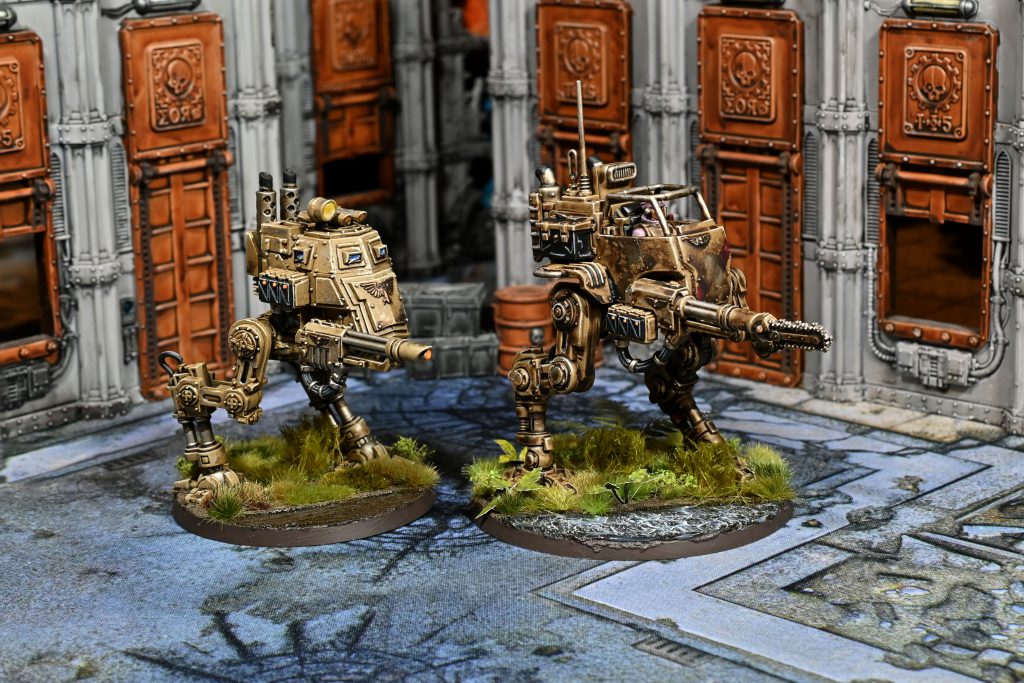 Something you will notice about this battle chicken is it is massive compared to the old one, they are only a little smaller then a armiger now! I am very curious to see where they price the new kit standalone, as they might hurt your wallet if they are priced like some of the other big walkers yet are in the 40-60 point bracket.

Overall, this is a great kit and I am excited to fill out a unit or two of these!

Scott: I don’t have much to add here that Rockfish hasn’t covered, but I will say: I was on the line about this guy when it was first revealed. Having it in hand, they really look great. I’ll probably be replacing any Sentinels I run with them over time.

If you want to see our review of the rules for these models take a look over at our review article here.