As a ‘ham of a certain vintage, John Blanche’s iconic Black Templars piece that adorned the cover of the 40k 3rd edition starter set is emblazoned into my memory. When Games Workshop showed off a model based on a particular Marine from that piece of art, I was hootin and hollerin at my computer screen, drawing complaints from my wife, my cats, and my HOA. Games Workshop was generous enough to send Goonhammer said model, and it is my pleasure, as Goonhammer’s resident nostalgia-poisoned Black Templars guy, to review him for you today.

I’ll start with the packaging here. There’s no transfer sheet, as the guy doesn’t really have much room for any, and the only tiny transfer sheet I can think of is an Ultramarines one. Inside the box you’ll find a 40mm base, a small sprue, instructions, and this black plastic sleeve thing. I don’t like that last bit, as you generally can’t recycle them and they just take up space. It protects the model a bit, but it seems like wasteful packaging to me. 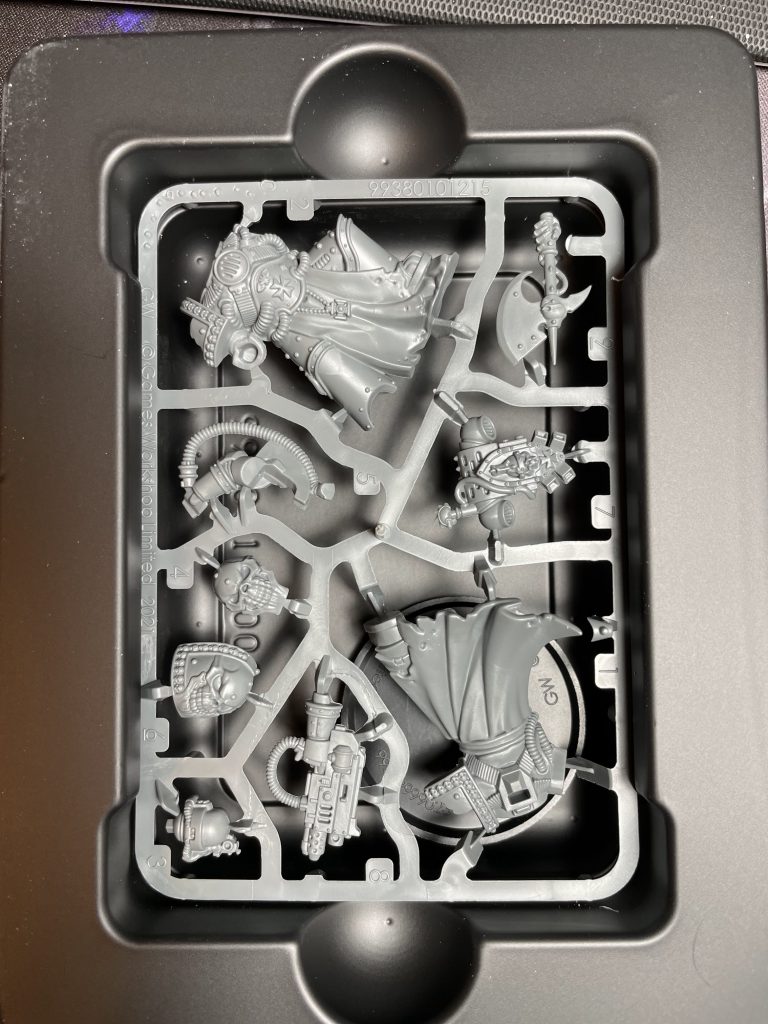 With that out of the way, we can get to the model itself. Have you built a modern GW character model? Cool, then you know what this process is like. Minimal cleanup, easy assembly, and maybe 20 minutes from bits on a sprue to finished model.

There’s no options or anything of the sort here, as he’s meant to represent a specific piece of art – much like Canoness Veridyan or one of the other models based closely on a piece of artwork. The only sticking point I’ve got is that the gaps on his cool skull shoulderpads are pretty gnarly, so you’ll likely want to mix up some sprue goo to smooth those over. 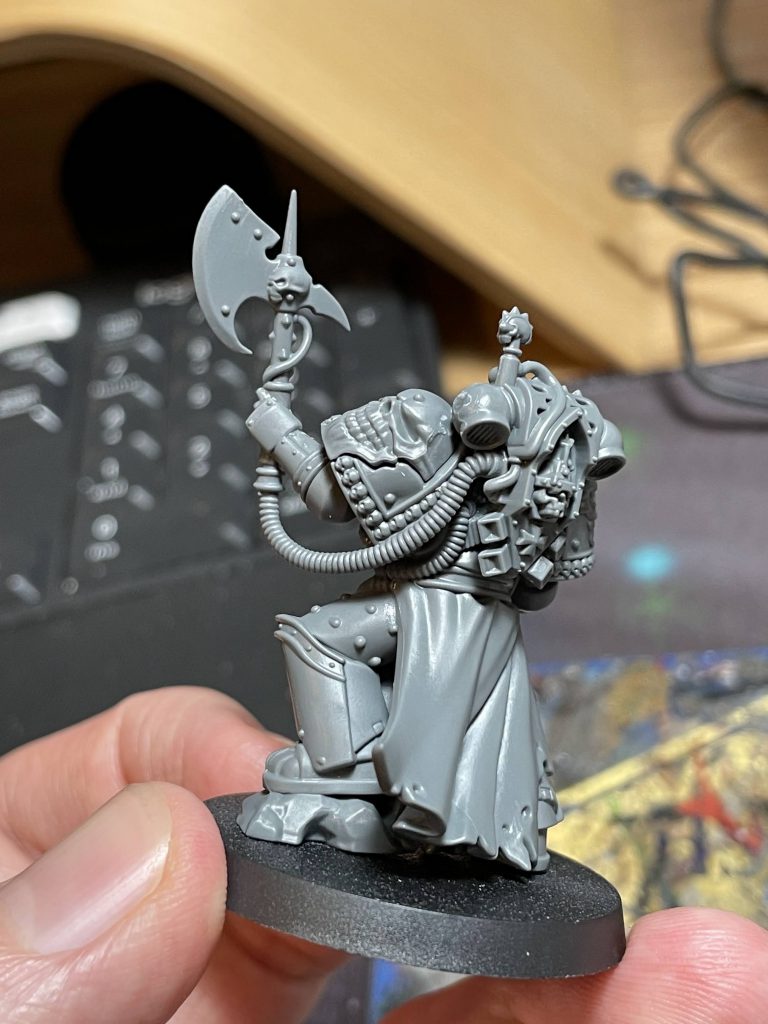 His helmet also uses a pretty standard Marine head connection, so you could swap it out for something else. You could easily swap in a skull helm and convert his axe into a crozius and make a killer chaplain, for instance.

So is This Guy Primaris or What

A lot of hullabaloo was made about this guy when he got previewed, as his backpack doesn’t look like a Primaris backpack. Resultantly, some parts of the community were excited that GW was putting out a new Firstborn Marine. Well, I hate to break it to the smolmarine truthers out there, but this guy is big. He’s not just thicc as hell, but he’s Primaris height for sure. Here he is next to a Firstborn Black Templar and a Sword Brother from the Primaris Crusaders set. Don’t roast me too hard, I haven’t cleaned up the highlights on the swordbro yet: 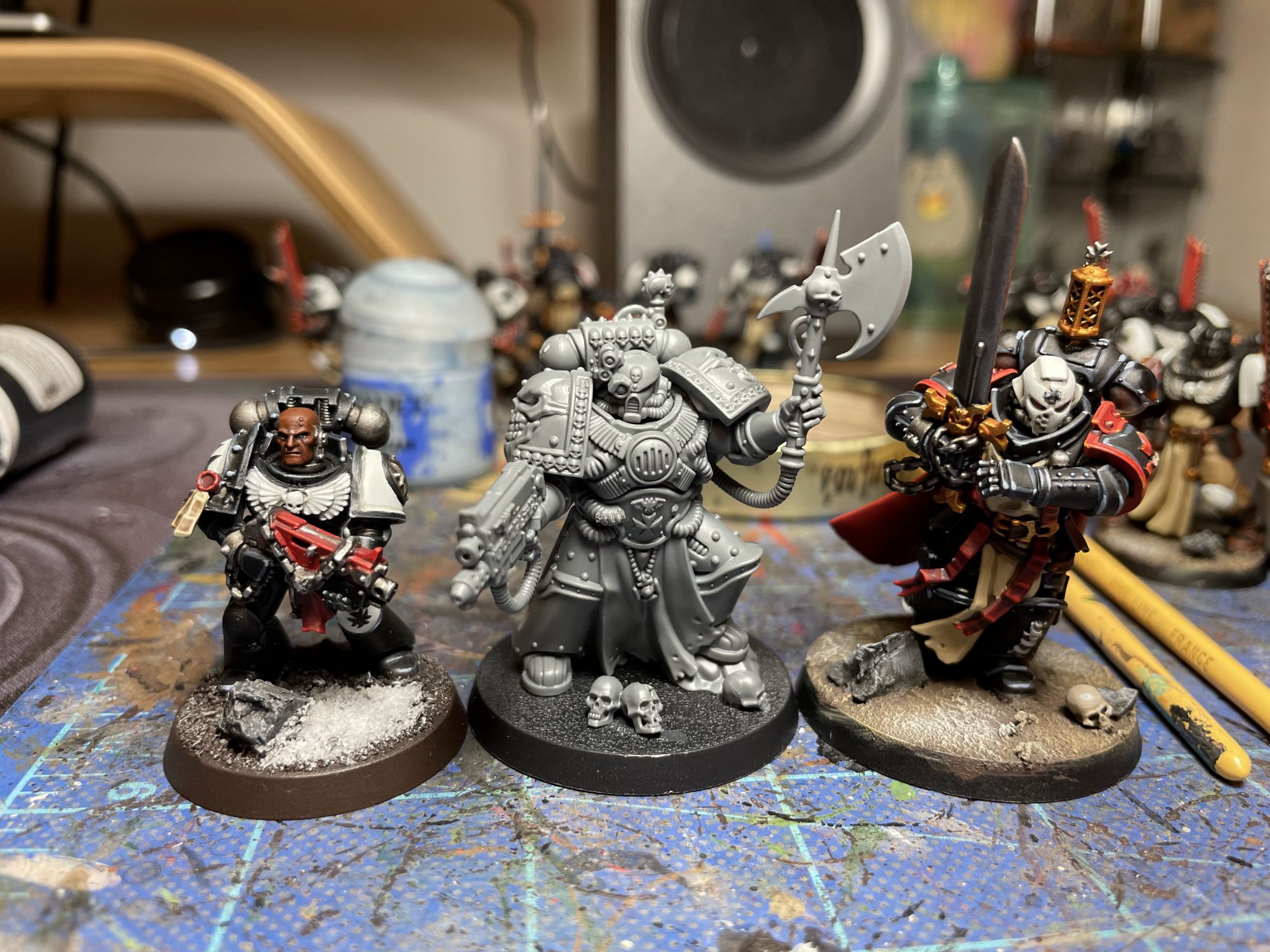 Warcom did reply to someone, somewhere on Facebook that you could use this dude as either Primaris or Firstborn. The Templars codex gives Primaris Lieutenants access to a Firstborn-sized combi-flamer which further confuses the issue, but if he’s Firstborn he’s a real chonker of a Firstborn. I’ll be using him as a Primaris Castellan, but look to your heart and it will give you the answer you want to this extremely meaningless question.

Predictably, I primed him black and followed the techniques I laid out in our How to Paint Everything: Black Templars article. Unlike most models I work on, I didn’t plan on “making him my own” – he’s a deliberate throwback to a piece of art, and I figured it would be cool to reproduce that in a way that hews close to my existing scheme.

There’s an old-school design sensibility about this guy which makes painting him a bit simpler than you might think. His pose is very open, meaning it’s not too hard to get your brush where it needs to go. I could have left his backpack off easily, but it’s nothing too hard to work around. Getting the back of one of his legs is tricky since you need to paint around his tabbard and other leg. I have a feeling some people might leave him off a base then pop him on after the fact.

I started by blocking out each section of color. This dude’s details are pretty large and tight together, and separating them will make picking them out easier. His armor is based black, the bright red of his weapons Mephiston Red, the cloak interior and red cables Khorne Red, the tabbard Zandri Dust, and the silver and gold in Leadbelcher and Retributor Armour respectively. Again, I’m not trying to reproduce the ‘Eavy Metal paintjob exactly or try to bring in Blanche’s Oops-All-Warmtones palette here, just trying to evoke the latter while tying into my Templars scheme. There’s a variety of textures which I want to represent with a variety of techniques to differentiate them from one another. 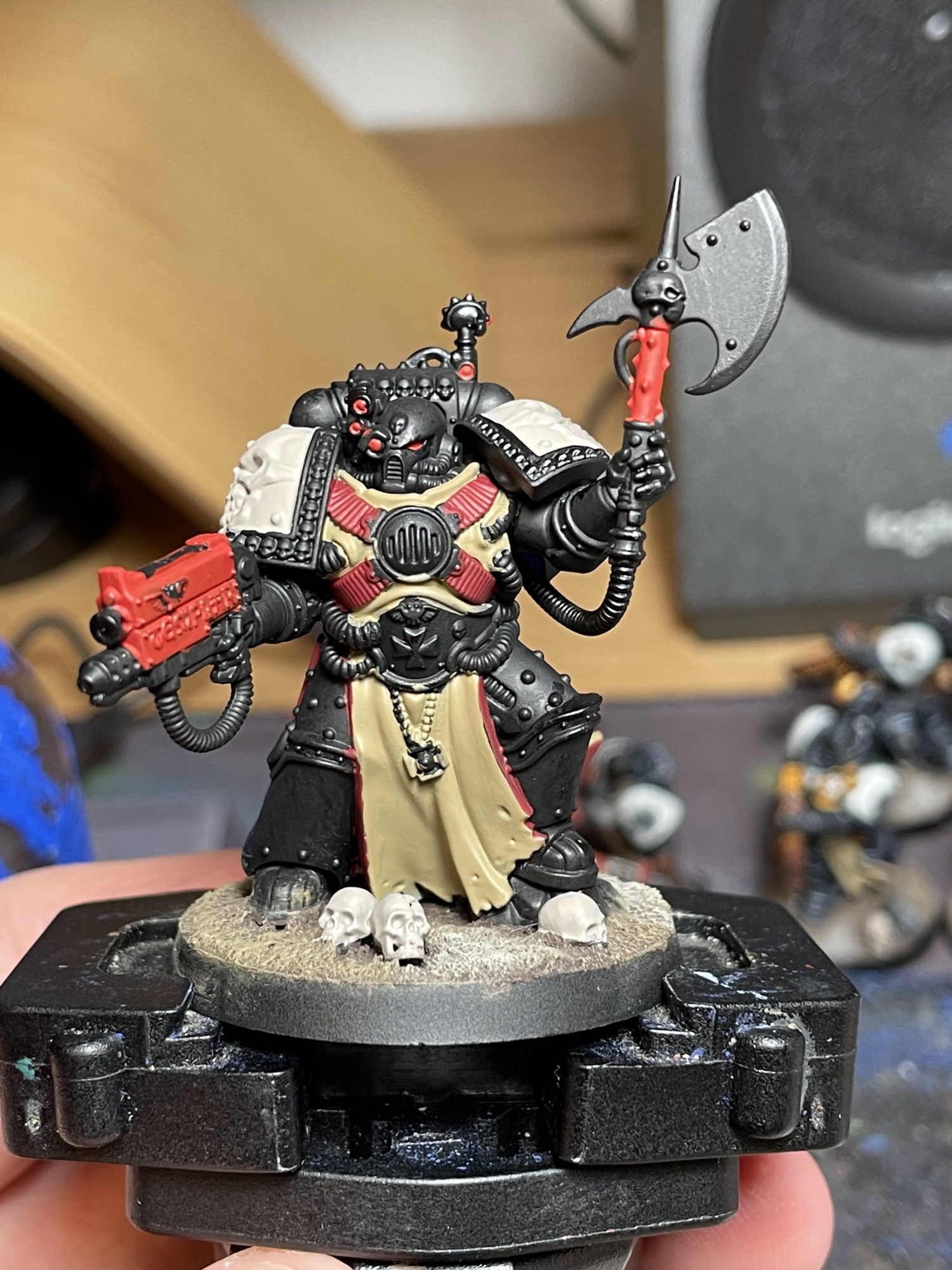 His details are deep enough to really take washes well, so I recess shaded every surface, except the metallics which I hit all over. The shoulderpads got a 1:1:1 mix of Agrax Earthshade, Nuln Oil, and Lahmian Medium, before a 1:1 mix of Agrax Earthshade just in the deepest details – the border around the trim and the eyesockets, nose, and sides of the mouth on the skull. I used that same 1:1 mix for the interior of the cloak to give it depth and warmth. I shaded the tabbard exterior with Agrax Earthshade, the dark red straps on his chest with Nuln Oil, then all gold with Reikland Fleshshade and all silver with Nuln Oil. On the flamer barrel I used a Druchii Violet wash and then hit the nozzle end with a 1:1 mix of Agrax Earthshade and Nuln Oil. I also used a smidge of old Guilliman Blue glaze around the skull on the power axe to give it a neat glow. You could use Tallasar Blue Contrast paint for this too. 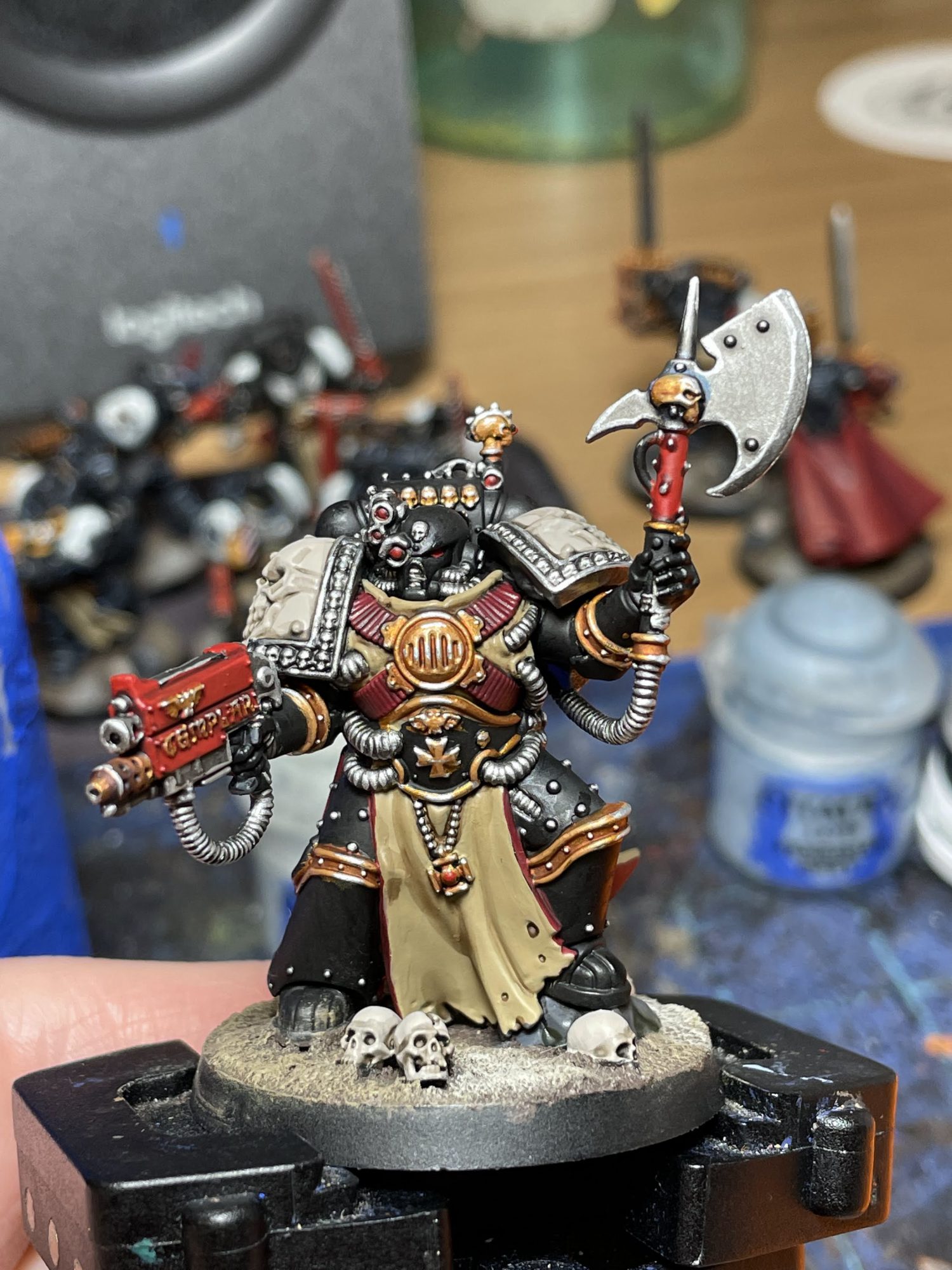 I’ll be honest: After getting the base colors down, I just started going to town and I didn’t finish until the model was done. I already highlighted the metallics in this photo. I’ll run through what I did though at this point I’m afraid I don’t have more WIP pictures. You’ll have to mindpalace this one, folks.

First the stuff that took mixing colors. For the robes, I built them up with a blend of Zandri Dust and Ushabti Bone, leaving darker colors in the recesses. I gradually mixed in more and more Ushabti Bone, pushing the highlights further and further, and then mixed in some Pallid Wych Flesh for the final highlight. The red robes had me follow a similar process, mixing Khorne Red with Mephiston Red for 2 or 3 gradually lighter coats, leaving the darkest colors in the recesses. The last bit of this blending business was on the skull shoulderpads, where I mixed Rakarth Flesh with Pallid Wych Flesh for two gradually lighter layers, a third even lighter mix for some edge highlights on the skull, and then pure Pallid Wych Flesh on the big honkin rivets.

I realized I hadn’t painted the cabling yet, so I painted it all Iyanden Darksun and painted Corvus Black stripes. I just kinda painted one stripe around the center of each section, eyeballed that distance to the next one, and worked outwards in both directions. I made the decision to highlight all the cables instead of drybrushing – this added a lot of time to the paintjob but did result in a cleaner finished model. The metal cables, as with all the silver on the model, were just highlighted Stormhost Silver, while the red cables were highlighted first with Mephiston Red and then Squig Orange at the very ends. I did basically the same thing with the candle on his back. All the gold saw highlights of Liberator Gold on the edges and then Stormhost Silver at the sharpest edges and rivets. His gun was highlighted with Wild Rider Red and Fire Dragon Bright at the sharpest edges and rivets. Most importantly, his armor was highlighted with Dark Reaper on the edges, then Fenrisian Grey at the corners and sharpest edges. You’ll also probably notice a few spots where I cleaned up some spillover on the belt and such – cleanup is the most important part of highlighting for black, as it’s what can really keep it from reading as grey. I usually save all my cleanup for the end of the paintjob.

Now there’s a boatload of ways to paint lenses (we explore many here on Goonhammer dot com) but for these I kept them all pretty simple and all uniform. I based them Mephiston Red, washed them Nuln Oil, painted a crescent moon shape focusing on the bottom left side of Evil Sunz Scarlet on them, then a second, smaller crescent shape further to the bottom left of Fire Dragon Bright. Lastly, I dot the upper right corner with White Scar.

With that, the chonker is complete! You can paint skulls how you like, but I painted them using Rakarth Flesh, that 1:1 Nuln Oil/Agrax mix in the recesses, and highlights of Pallid Wych Flesh.

I will say one tricky bit I had to choose how to define was this bit on the bottom of the skull’s jaw where it becomes the shoulderpad rim. There’s a gap on one side, but not on the other, so it’s kind of a choose your own adventure situation how you paint it.

It was a marathon 2 days of painting, but he’s done and was frankly a load of fun to paint. It owes to the inspiration here, but it’s rare we get a model this weird from mainline GW, especially for any flavor of Marines. The proportions and aesthetics are all ripped straight from the artwork, even moreso than a lot of the recent models based on classic art like Mephiston or Helbrecht. Honestly, for as many times as I’d looked at that John Blanche Templars piece, I never noticed the chonker Marine this guy’s based on was wearing a robe on his torso. All this time, I thought it was just bone white armor, until I really pored over the artwork while working on this guy. Anything that helps me further appreciate a piece of art I’ve always loved is aces in my book.