I’m going to cut right to the quick here. High Marshal Helbrecht, generously provided to us by Games Workshop for review and painting purposes, is Peak Black Templars. With surgical precision, their sculptors tapped into the 15 year old residing in my brain and brought the art of my youth to life. Mark Gibbons’ iconic artwork, previously serving merely as inspiration for High Marshal Helbrecht, is now reproduced beautifully in the third dimension, serving as a tiny diorama brimming with details and narratives. You, dear reader, likely could have surmised this from looking at the model. However, holding this tiny paragon of fury and zeal in the palm of your hand is a different experience entirely.

As a minor sidebar, I will say there is no transfer sheet in this kit. While I am firmly a Transfer Guy, there is no room on the model for a transfer to go so this is neither a criticism nor a warning. I am simply stating what is not in the box.

Colin: When I got Helbrecht I knew I was going to convert him into a character for my Blood Angels army. I wasn’t sure what I was going to do until I had the model in hand. The first thing that struck me was just how small the model is. His hero rock/Xeno corpse/imperial weirdos do a lot of heavy lifting for the stature of that kit. I was surprised that he fit comfortably on a 32mm base, but it gave me a lot of options for the kitbash.

When my brain was dumping serotonin at the first sight of this model, there was a tiny voice of dismay piping up in the background: How the hell will this go together? There are overlapping details aplenty on the new embiggened Helbrecht, and I was deeply concerned that they would assemble in such a way that would make subassemblies impossible. I am relieved to report that this is not the case. Assembly and cleanup was simple, and Helbrecht, his base, his backpack, and his two attendant weirdos all stand freely on their own.

For the backpack, I just left the bottom part of the sprue that attaches to the tiny trinket intact, with the plan to cut it off later. This will make popping them onto temporary bases for painting easy. It’s a thoughtful gesture, really.

As you would likely expect from a named character, there aren’t many options for builds here. I do not recall them being terribly well publicized though, so I’ll lay them out here. First of all, you have a choice of not two but three distinct heads. You have Helbrecht helmeted, Helbrecht scowling, and Helbrecht scowling harder. Secondly, you have the option of a dead Ork on the base, as seen in the Mark Gibbons artwork that is being recreated here, or a rock if you’re a coward. (Jack: I’m a coward) The fit here is wild, with the bottom of these impromptu terrestrial sheaths perfectly fitting over the textured base. 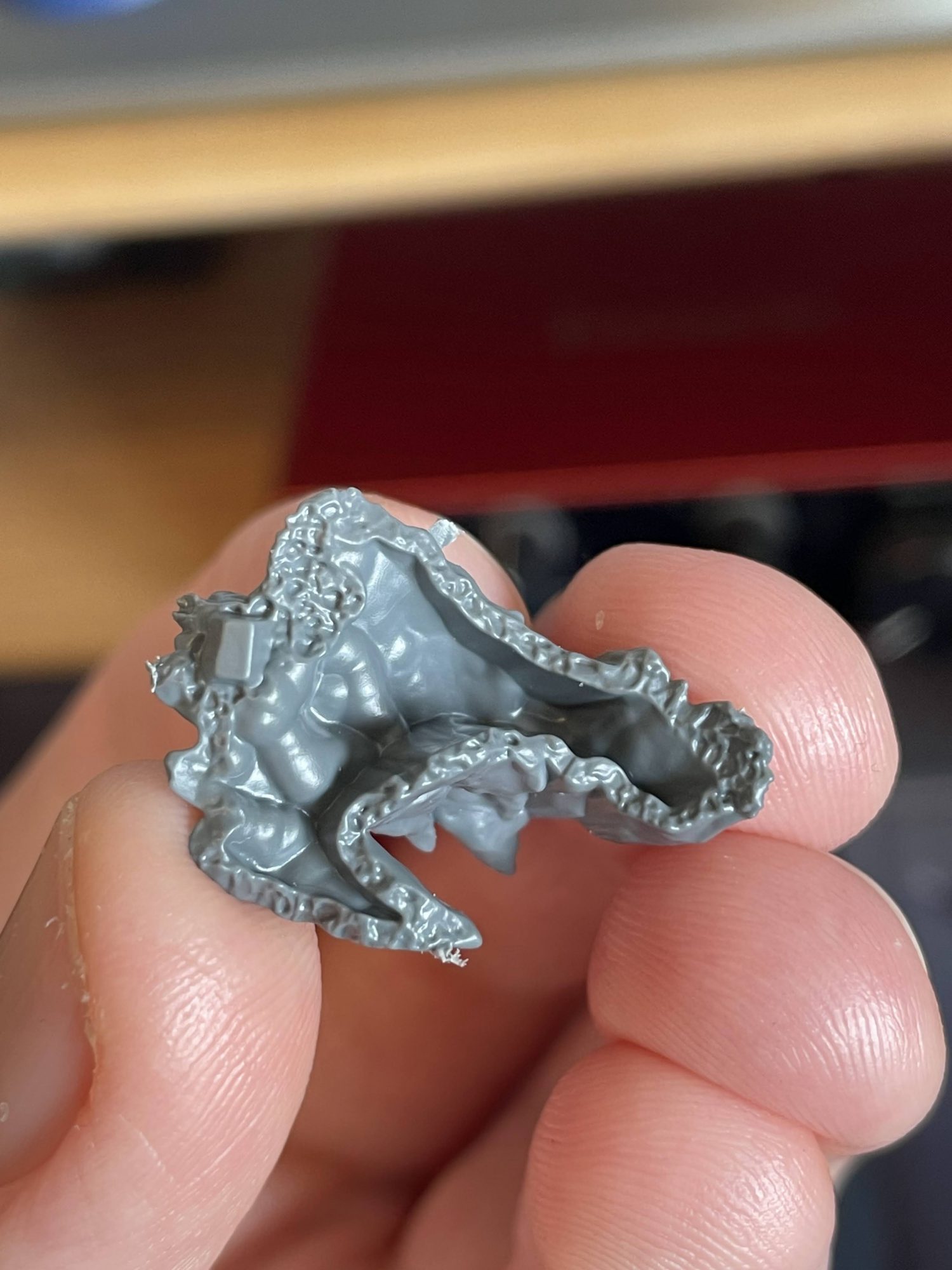 The trio of personalities themselves all go together more or less how you would expect a modern plastic character to fit. The base has little pegs and footholds for everything to go on, so they arrange themselves in diorama-like order easily. One sprue has large friend Helbrecht while the other has the basing materials and attendant weirdos. There are some odd fits here, with a pair of flat joins without guide pegs being the only way to attach the various pieces. This isn’t a problem with your general rifle arm on an Intercessor, but with a character this intricate, it can be slightly unnerving. As a result, when I built large friend Helbrecht his sword was at the wrong angle, though forcing him into correct placement by arranging him on the base was not hard. There’s also a tough gap on his cloak which will take some finagling to fit flush.

Jack: While I found the wrist to fit adequately despite being a flat join, that long seam on the cape is awful. With nothing to key it at all there’s a ton of wiggling as the glue sets, and it turned out I ended up with a fair bit of gap further up on the shoulder that I’d lost track of trying to make sure the lower cape join wasn’t awful.

I still do not know if mine is sufficiently flush.

Jack: I really love sub-assemblies, and I felt very let down by Helbrecht. The sculpt itself is glorious, but it ends up being incredibly hard to paint. The cape takes up an absolute ton of space, and access to it is blocked by both legs and lantern. There’s no reasonable way to assemble him without the cape on, as the main cape piece includes the back half of the torso, and the seam we talk about above is from part of the cape that locks in over the rest of the body. I’d strongly recommend keeping both sword and lantern separate during painting – both glue on at pretty clean joints that won’t be a problem when painting, and open up a lot of access to the armor. I also can’t see any way to do an adequate paint job with everything glued to the base, even GW’s instructions say to paint before that final assembly step.

Colin: Helbrecht’s model being smaller than expected meant I could use him as either a Primaris character or a First Born character. Because I wanted to keep the majority of the original model intact, I felt his ‘high right arm with low left arm’ position was perfect for a banner wielding Ancient. The Chapter Banner from the Sanguinary Guard kit was the bit I needed to make a Chapter Ancient.

Helbrecht has his fair share of Black Templars iconography, of course, but it wasn’t too much trouble to remove the chapter symbols to make a blank canvas for my Blood Angels. I shaved off the crosses on the left pauldron and front of the tabard using a sharp hobby knife, cut his right hand off at the cuff, and replaced his right pauldron with a blank from a Phobos marine. After that it was just a matter of swapping his head for a Sanguinary Guard helmet, backpack from the Indomitus Chaplain (minus the flair on top so as not to compete with the banner and helmet), and a chainsword from the Death Company kit. Replacing the Black Templar badge at his shoulder with one from the Blood Angels Assault Terminator kit was the finishing touch.

For painting, I did leave him in subassemblies, though it wasn’t ideal. The fact that the cape is black made it easier to hide the ugly seam right behind the left hand, with the other pieces fitting pretty seamlessly. The head, backpack, cape (2 pieces) and banner were all painted separately and glued together at the end. As there was a LOT of flair on the model, even after removing some sculpted detail, I let transfers do a lot of the detail work and give him as much flair as befits a Chapter Ancient.

Overall I’m very pleased with how the model came out, though it’s hard to see Helbrecht in the final model at all, especially as its comfortably situated on a 32mm base. Maybe crossing the Rubicon Primaris can only make an old man a little larger? Maybe it’s just spite. But in any case, it’s a great model that I’m sure we’ll be seeing a lot of people convert into other characters for their armies. He’d also be a great base model for a generic Black Templars Marshall. I look forward to seeing what people do with the sculpt!

SRM: As alluded to prior, I wanted to paint this tiny diorama in subassemblies. It was easy to glue each individual to their own placeholder base before lining them up and priming them all black. I used a small piece of sprue so Helbrecht could Captain Morgan his way to the priming box. However, the next part of our story will need to wait until next week, when we here at the Very Real and Corporeal Goonhammer Offices will all have had time to paint our new giant tiny crusading sons.

That means you’ve got one more iteration of Helbrecht to look forward to next week. Have any questions or feedback? Drop us a note in the comments below or email us at contact@goonhammer.com.