Narrative Forge: The Anvil of Apotheosis

Here at the Age of Sigmar department in the Goonhammer offices we’re a bit baffled by all the loud noises coming from the 40k team. No idea what’s got them all so excited, probably a new type of bolter or something. Anyway, we’ll carry on with our look at the biggest Games Workshop release this year – the General’s Handbook.

This week we’ll be looking at the Anvil of Apotheosis. RagnarokAngel is especially excited about this one.

RagnarokAngel: Personally this has been something I wanted to see in a Games Workshop product for a long time. I came to wargaming from Tabletop RPGs and never really left that mindset. I always wanted a way to come up with a general that was a custom character and use them on the table; GW used to do this kind of stuff in the past, when there were more equipment and upgrade options, but as things became more streamlined and rigid that sort of thing drifted away. I’m glad to see it back.

The Anvil of Apotheosis is a new idea introduced in this year’s General’s Handbook. It allows you to create your own character, using a series of tables. This is designed to be used in Campaign Games, Open Play games (with your opponent’s permission) and, interestingly, Matched Play (with the tournament organiser’s permission). We’re not sure how often, if ever, this will be used in tournaments but it would be nice to see, particularly in tournaments with a narrative bent.

It follows these steps:

The easy bit. Here you decide whether you want your hero to be a Champion (with a limit of 20 Destiny Points) or a Conqueror (with a limit of 40). In theory there’s no real cap here if your opponent wanted to allow it, but they likely needed to set a limit for the sake of some sort of balance.

This is then reflected in the points value of the model in Matched Play – the total number of destiny points you spent, multiplied by 10.

There is a list of 23 different Ancestries in the book to pick from (we presume that this will be added to in the future). Each ancestry costs a certain number of Destiny Points and sets your basic stats and keywords. All of them have the HERO keyword and some have the <ARMY> keyword with a list of options.

As you can see it covers most species in Age of Sigmar. Each ancestry comes with a preset number of wounds, bravery, movement and saves. Don’t worry, you can change these later. For example let’s look at if we wanted to make one of Sigmar’s Golden Boys, what do we have to work with?

Not a bad statline. Makes sense why they cost a quarter of the minimum points.

Here you pick the weapons your hero is armed with. They get to choose one of the following sets of options:

Each weapon comes with the stats as well as a Destiny Point cost. Most of them cost 1DP although some of the more powerful two handed weapons cost 2. There’s also the choice to take an improvised weapon for 0 DP. As a glimpse into the one handed weapons options, lets look at the table:

Pretty varied list, and a lot more if you prefer a two handed variety. The generic weapons again function as a baseline; you have options further in the creation process to strength them. Also, despite the very generic names you’re encouraged to rename them as you wish. For our prospective Sigmarine let’s give them a Hammer, as befits Sigmar, and a handbow for ranged options. At 2 DP a piece we’re now at 7 including our 5 DP base. 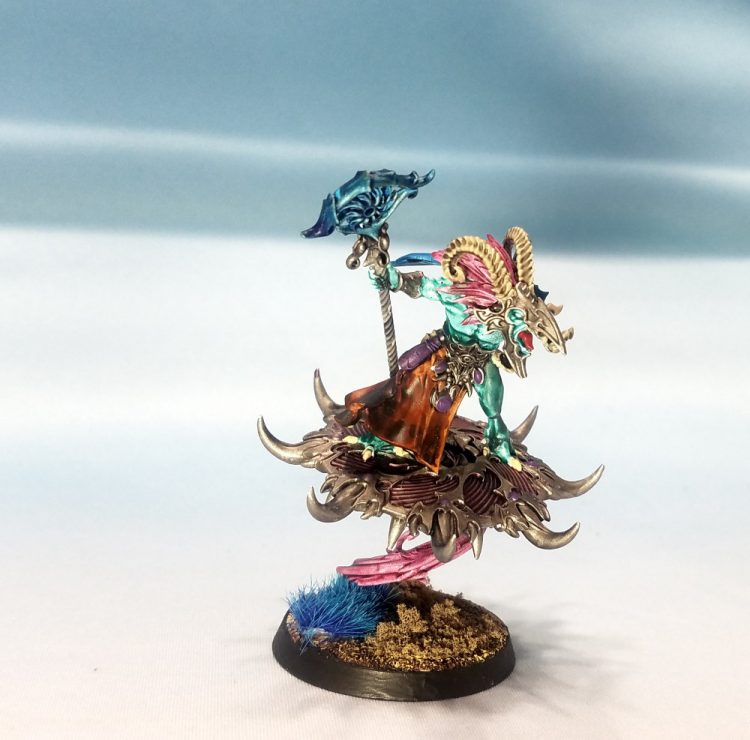 Now you get to pick one archetype from a list of 3. Each one comes with various abilities and some have restrictions on them

These are the standard heroes and can be picked by anyone other than a Masterclan or Deathmage. When you pick this you get to choose between two abilities

This is the Priest archetype and grants the model that keyword. It’s restricted to everyone but Daemons, Deathmages, Saurus or Skaven (although Clans Pestilens are allowed).

Gains the Wizard Keyword. Can’t be taken by Duardin, Khorne or Saurus. They get to choose 1 spell from the table provided and get to unbind once. They also know Arcane Bolt and Mystic Shield, as usual.

As befitting a Warrior of Sigmar I figure we can make them a Champion. He will choose Lead the Attack as is fitting. He is still at 7 points, since archetypes cost no DP. 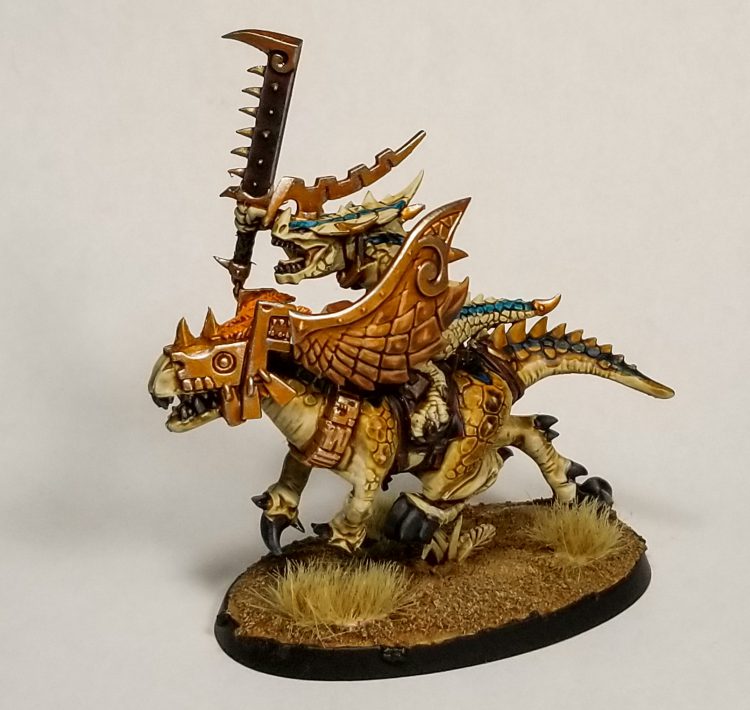 Here you get to pick from 3 levels of Bestial companions (or none at all). Each costs a number of Destiny Points and comes with the relevant stats as well as an enhancement.

Back to our Hypothetical Stormcast, if we want to give him a Gryph-charger let’s put this stat block in, giving him a Wound characteristic of 7 and movement of 8.  We’re at 15 DP spent now.

We wanted to give our hypothetical warrior of Sigmar a mount right? Well as a Gryph Charger it has to fly so let’s give it the fly option, we’ve spent 19 points, so we have one left over.

The finishing touches, if you have any points left, allow you to give your character stats boosts and unique abilities. The list includes:

For our Stormcast we only have 1 DP left, so might as well throw a wound on him, giving him a total of 8. Pretty solid, we could certainly do better if we upped the cap to 40, or took him off his mount. There’s a lot of potential variety of options, even if they are pretty generic on the surface.

I think that this is all a solid foundation. A lot of the abilities are very generic and based off of commonly seen abilities. You’re encouraged to fluff them up, giving them unique names or using the attribute adjustments to make the character your own. As much as I’d like to see more wild, out there abilities that probably was never going to happen, as they needed to create a framework to allow a somewhat balanced option.

Is it potentially open to exploitation? Absolutely. That’s why it will never see play in a “real” tournament. Every army would likely be filled with the same 2-3 builds that have been min-maxed. That’s not what this is for, it’s for allowing you to create your own characters, either ones you’ve created in battle reports, Soulbound Campaign settings, or fan fiction to be unique players on the table rather than generic clones of pre-existing ones, and it’s suited to the kind of events that would support that – narrative-focused campaign weekends or similar, perhaps with comp in place to limit the builds a little.

What kind of characters will you be making? We’d love to see them, and their accompanying models – contact us on social media or contact@goonhammer.com.