Glad to have you here, Scummers! This week, we’re ecstatic to finally bring you our take on the newest gang to hit the Underhive, the renegade Slave Ogryns. They’re a fresh take on a melee-centric gang with amazing models, and Merton can’t stop talking about them. So read on, as we break down the brand new beefiest boys in town!

Slave Ogryns, like the Corpse Grinders before them, are a primarily close-combat oriented gang. There’s no shenanigans with the Ogryns, like tricksy masks or infiltrating little men, only giants lumbering towards their enemy ready to crush them up in massive bear hugs! They’re not fast, and some of them aren’t even smart enough to know that they should fall over when they get shot, but they’re tougher than anything else anyone’s faced so far. 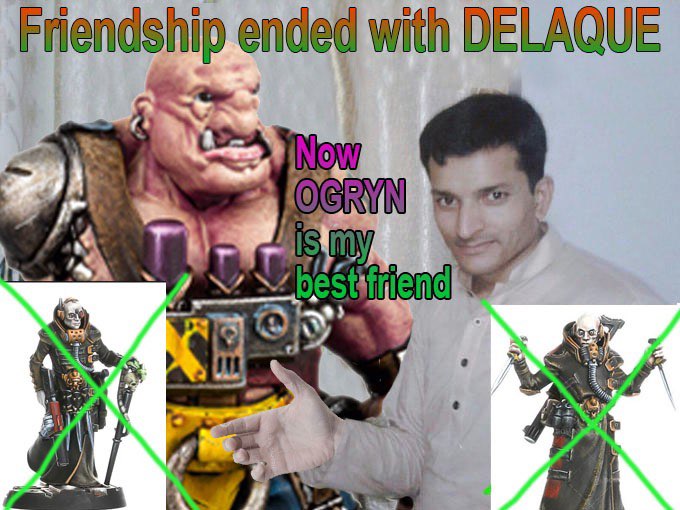 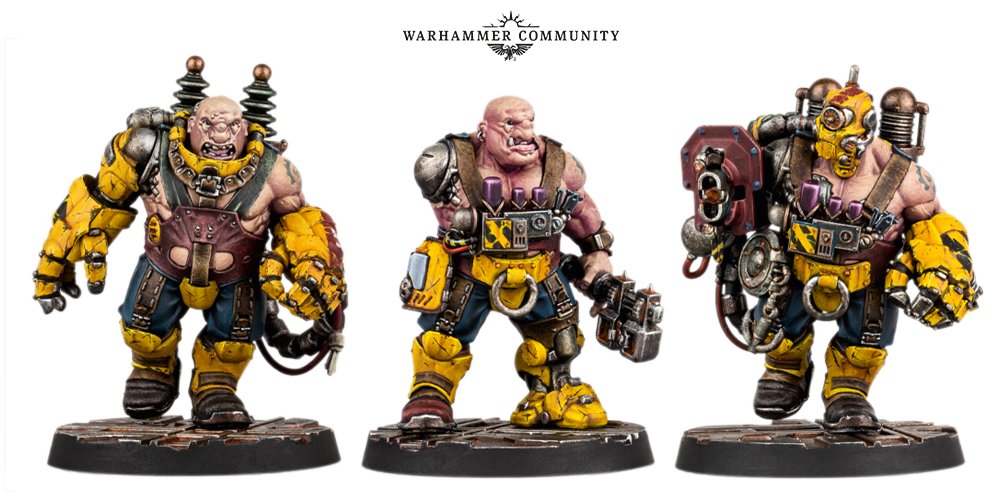 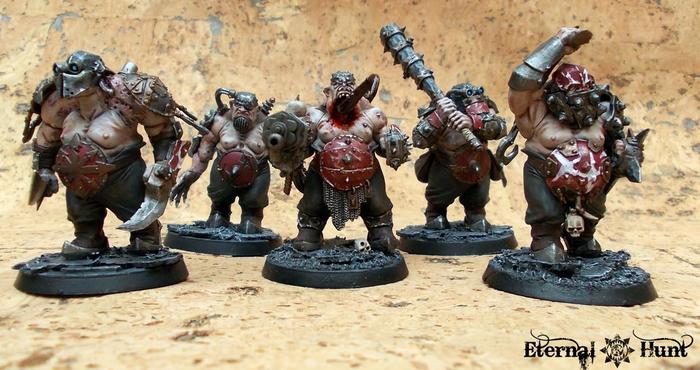 After all the craziness of the other House of Chains gang, it’s refreshing to go through a list with only four choices. Expect a far smaller roster compared to other gangs – these dudes are expensive!

The Big Boss himself, an Ogryn leader will politely tolerate a Corpse Grinder Butcher’s onslaught before ripping them in half in retaliation. This is the melee monster in a gang full of melee monsters, so you’re going to want to do everything you can to make sure he can get across the board and into combat as quickly as possible.

The Overboss is also the only fighter in the Slave Ogryn list capable of Group Activations, and will typically only be able to activate a single other fighter alongside him. 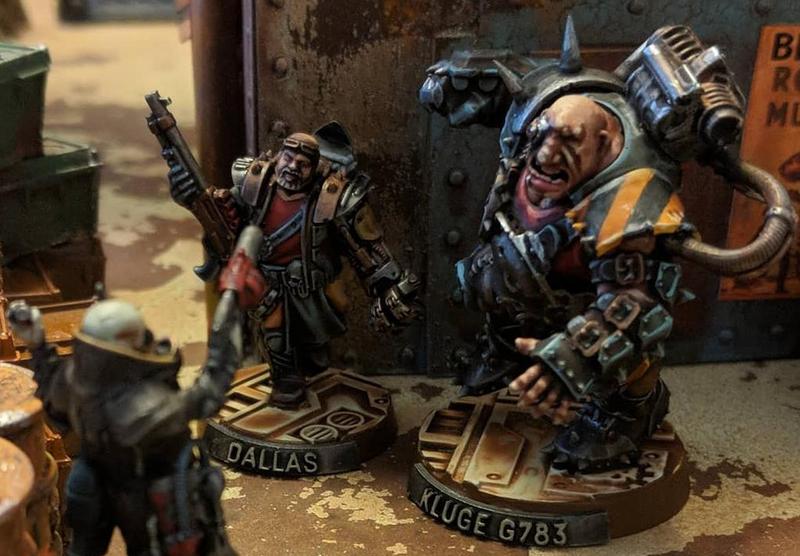 Almost as deadly as the Overboss, only lacking one extra attack. They’re hardly any slouches, swinging just as hard with the same weapons, if maybe a little slower.

Underbosses tend to be slightly too smart for their own good, and spook slightly easier with a decidedly-average Cool stat of 7+. Be sure to keep them close to your Overboss after the gang fails their bottle check to stay in the game, which’ll happen more often not with tiny Ogryn crews! 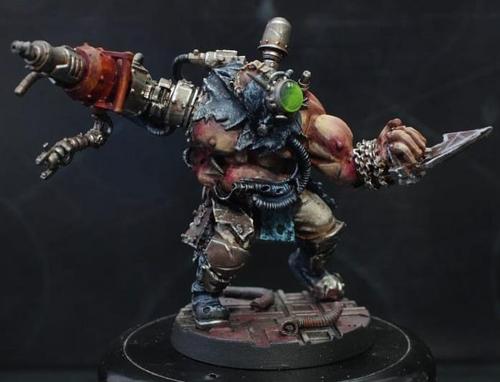 The same general stat-line as an Underboss, with less Wounds and Weapon Skill in exchange for a 20 credit discount. They can’t gain skills, but do come automatically with the Headbutt skill, for what it’s worth. If you absolutely need someone to bring a Storm-Welder, this guy’s the cheapest platform you’ll find, but outside of that you’re better served with fielding Lobo-Slaves for your Gang Fighter roster balance requirements.

Their special rule is Loyal, which doubles the effectiveness of Assists in close combat. There is undoubtedly a build to take advantage of this ability that we’re not seeing, but multi-model engagements are uncommon enough already, much less with a gang that’s going to be bringing the smallest crews in the game so far.

Un-pinnable gangers? Sign us up! Lobo-Slaves aren’t the fastest or the most dangerous fighters in the Ogryn gang, but they represent an omnipresent threat that the opponent has to deal with at some point before they close the distance. Although they cost roughly the same amount of credits as two gangers from a regular House with a basic loadout, they’re easily packing more than double the survivability. Point them straight towards the opposition, and we’ll see who flinches first.

The flip side to their non-pinnability is that they’re also unable to use the Take Cover action. Depending on play-style, this may make it somewhat more awkward for them to maneuver behind the protection of lifesaving scatter terrain. 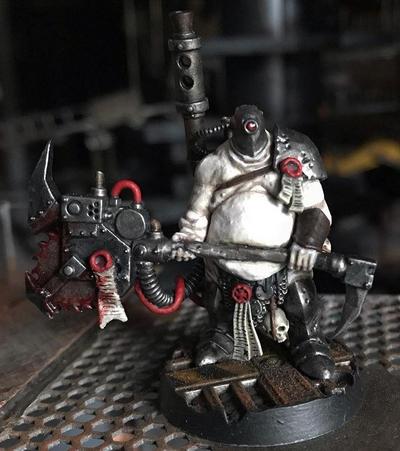 Mobility and survival are going to be key when giving your Ogryns some new tricks, since pretty much all of their weapons are useless if you can’t make it across the board into combat. There’s no Nerves of Steel here, so hopefully you’re packing some Lobo-Slaves to keep the momentum going!

Walk it Off (Muscle): After making two Move actions, recover a Wound or remove a Flesh Wound after a successful Toughness check.

Commanding Presence (Leadership): Group Activations can include one additional fighter.

We’re as shocked as you are, dear readers! Slave Ogryns recieved a Tactics Card pack of their very own alongside the House of Blades Escher release, and these cards are phenomenal. We’ve listed some of the options for their unique tactics below, along with some of our favorites out of the giant pile of universal cards. (For all those and more, we recommend checking out All of the Tactics Cards, Ever.)

Desperate Effort (All Gangs): Pick one of your fighters and activate them as though they had a Ready marker. At the end of the action, they are Pinned.

Forward Planning (All Gangs): At the start of the game, choose up to three fighters. These fighters may immediately make a free Move (Simple) action.

Quicker Than They Look (Ogryns): When a fighter makes a Charge action, double the fighter’s Move instead of adding D3”.

No, I’m Smarticus! (Ogryns): For this round, any successful hits on your Overboss can be transferred to an Ogryn within 3″ on a 3+. 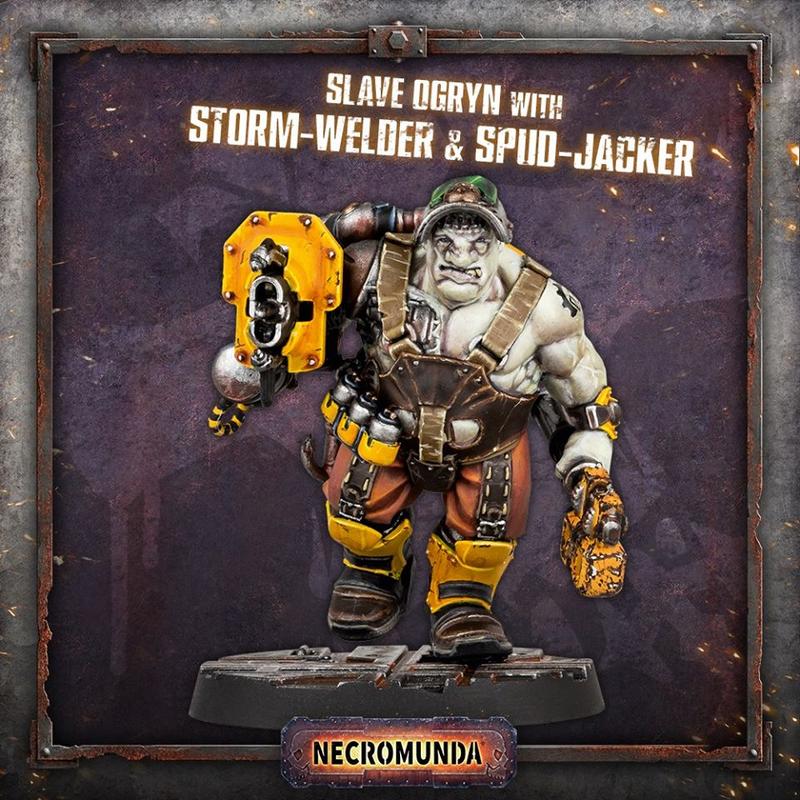 This doofus is in for a bad time, very shortly. (Credit: Games Workshop)

We’re evaluating all of this stuff in a little vacuum, so melee weapons are going to be rated higher than usual because that’s all these dudes can take! If you need to bring things back into full perspective just knock a letter grade off of everything because it’s not a gun. Except the Storm Welder – that thing is not a gun, it is a death wish.

These weapons may only be purchased at character creation. Can an augmetic weapon be stripped off of a corpse and given to a new recruit? We’d say yes, but the answer is unclear.

You’ve been warned. Go on, try it! (Credit: Games Workshop)

Hand Weapons can be bought at any point during the campaign. 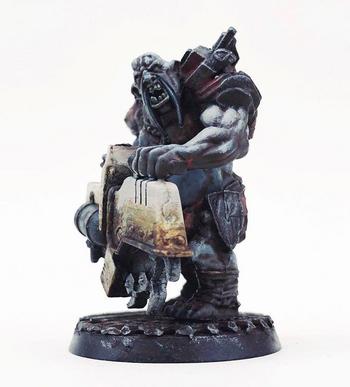 That saw is larger than most Guardsmen. (Insta: @whitetigertablecraft)

As a gang without access to guns other than the hilariously bad Storm-Welder, grenades suddenly become extremely important. Combine that with Ogryns’ naturally great strength, and most grenades are being chucked up to 15” away! That’s really good! It’s like the whole gang comes with Grenade Launchers!

(Quick Note: Frag Grenades and Incendiary Charges are only available in bosses’ equipment lists, and Lobo-Slaves cannot take grenades at all, unless they’re bought through the Trading Post or Black Market, or already in your gang’s Stash.)

It is a good idea to put armor on your very expensive large adult children. Note that only Slave Ogryns and Lobo-slaves can take Hazard Suits at gang creation. 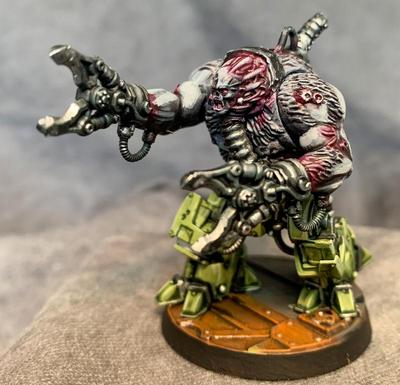 The mind on Pinch’s monster is supposedly intact, and apparently that’s all that matters. (Insta: @trashwizz)

These items are available for purchase at gang creation and during campaigns. 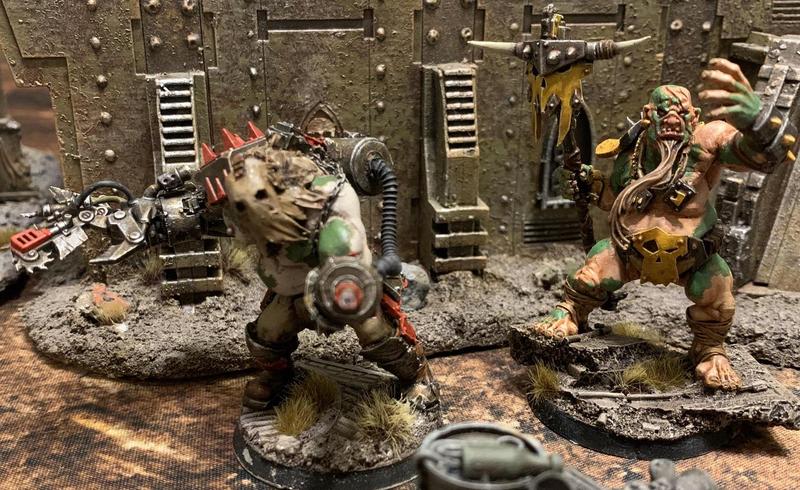 Without resorting to bits from other kits, the Ogryn box presents a bit of a challenge, to put it lightly. The boys are perfectly able to tear through the competition with their bare fists, but it would have been nice to have a bit more variety, ya’know? For those who’re looking to branch out and kit-bash, we recommend sourcing some Axes from Ork Nobs, some extra cudgels and armor from Guard Bullgryn, and maybe even some beautiful faces from the Ogre Blood Bowl Team.


We’ve tried to beef up the ‘Bosses with as much killing power and survival tools as possible, since they’re going to be your main threats after your Storm-Welder inevitably either fizzles out or explodes. Try to keep everyone else out of line of sight from your Welder if possible, as Reckless makes for a nasty surprise when you don’t position around it. Advance as quickly as you can with your Lobo-Slaves and Bosses, but don’t hesitate to pause and toss a grenade or two if the situation calls for it!

If it’s got Blaze, we’re taking it! As many Arc Welders and Incendiary charges that we could squeeze into a 1k build, with a trio of Lobo-Slaves trundling towards the inferno ready to Stop ‘Em, Drop ‘Em, and Roll ‘Em.

Somewhat similar to the basic box list but a whole lot less ‘fun’. Demonstrably better at actually winning games, if that sort of thing interests you. 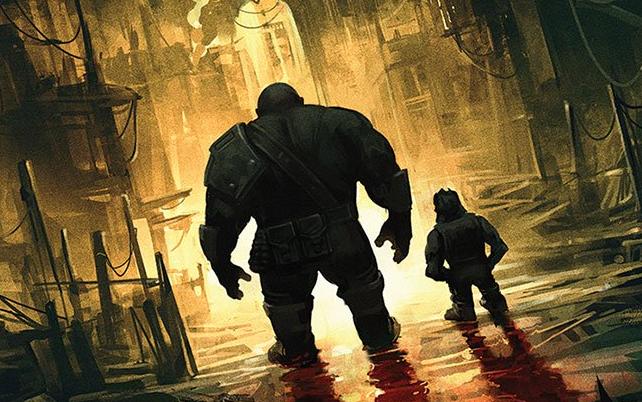 In this version, Lennie throws George into the Sump. (Credit: Games Workshop)

We’ll be the first to admit, these guys looked like absolute trash on paper. Expensive fighters with expensive weapons, no guns and no hope of ever getting anything better in that department from the Trading Post and Black Market. Then, we played a few games with them and now see that oh man, we were very wrong.

You don’t have a ton of bodies but each one feels like you’re playing with a tubby Terminator. The Lobo-Slaves creep forward no matter what, and even if pinned the ‘Bosses are able to stand and move 5”. By the time your Ogryns make it across the board, maybe your opponent was able to take down one or two, and the rest’ll guaranteed have taken a ton of damage, but they’ll still be standing and then they’ll be charging. At that point, it’s all over. Nothing beats the bear hug!

In short, Slave Ogryns are fun. They’re fun to play, since they’re a melee gang that stands a chance at making it into close combat, and apparently they’re fun to fight, since unlike Corpse Grinders your opponent is allowed to freely shoot at them. If you’re looking for a gang that’s pretty straight-forward and relatively forgiving, give ‘em a shot!

That’s all, folks! Merton’s finally got his Ogryns in hand, and he’ll be wrecking house with his new gang in his local campaign starting real soon. If you’ve got anything to add to his arsenal, or any questions at all about Ogryns or anything Necromunda, hit us up in the comments or over at necromunday@goonhammer.com! We’ll see you there!