It’s Monday, Scummers! Everywhere else, Mondays are complete garbage. But here at Goonhammer, Mondays mean Necromunday! This week, the Necro Bois are rolling their recovery checks and Greg is taking point to show off his Palanite Enforcers “gang”, The Moon Base Klaisus 1312th Precinct.

It both does and doesn’t make a lot of sense that I ended up with Enforcers. I’m not a huge fan of the rent-a-cop thug vibe, and I don’t actually play Necromunda, nor do I have plans to start. But on the other hand, the Palanite Enforcers were included in the Dark Uprising box that everyone with even a passing interest in either this game or Zone Mortalis floor tiles bought, so when Rob “TheChirurgeon” Jones sent them to my house for free, I didn’t have much of a choice. There’s also the fact that, should I ever get around to playing an actual game, I’m gonna be real bad at it, so every game will either end in victory for me, or feature a bunch of unruly teens disrespecting the mall cops. That’s what you call a win-win.

Necromunda isn’t really a game with good guys and bad guys. For the most part, it’s just poor people rumbling each other over what they need to survive on their horrible prison planet. There are a few outliers: the Chaos guys are clearly Bad, and they do the usual Chaos thing of committing murders because they want to summon their dark gods, and because they think – correctly – that it will be cool. The Palanites aren’t that different? If I want to be fair to them, they’re attempting to maintain a semblance of order in an anarchic hellhole, which is not an easy job. But they’re also violently oppressive and, crucially, are never shown to actually help anyone, just punish.

Necromunda isn’t what I’d call an apolitical game, but for the most part it’s at least amoral: gangers have no real choice but to fight and kill, any rackets or loot being a means to that end: in this environment, you either join a gang and battle for survival, or you get smushed into corpse starch. Enforcers are the odd ones out there – they have a support system uphive and don’t really need to do what they do, and could probably choose to spend less time stomping on heads if they felt like it, but they don’t. Even if it’s for a defensible higher purpose, I have a harder time giving them a pass for their hyperviolence than I do the other gangs. And I do mean “gang”; these aren’t the Arbites. On the other hand, they do have cool helmets, so you take the good with the bad.

My plan for the 1312th was simple: I had 11 models, zero sets of instructions, 10 Necromunda bases, and no idea what any of the equipment did or was legal to take, so I just glued on whatever looked cool. That’s not entirely true – I did remember something from the 40k Badcast about combat shotguns being good, and there’s a bit on the sprues that looks like it might be a shotgun, so I used a bunch of those – but for the most part, these idiots got whatever guns and clubs looked meanest.

For painting, I wanted something similar to real riot cops. So it’s a lot of dark leather and black armor, with a dark blue undersuit. I wanted to do high-visibility markings on their armor, something like the fluorescent panels that you see on emergency personnel. Initially I did them in white, but it looked wrong, so I went over with some thin layers of a bright yellow, and it really pops against the darker color of the rest of the model. I didn’t do any weathering because I don’t know how. (Rob’s note: We have literally written a tutorial on this) Their guns and melee weapons are mostly left in a grungy metal with some black accents on the furniture – I wanted them to look like the mass-produced tools that working-class jobbers would be issued, neither the sanctified relics of the space marines or the slapdash improvised weapons of the underhive. In the end, I don’t think this is my best work – it’s sloppy in places, and I didn’t exactly push my limits on them – but the color scheme works well, and it was fun to paint something different.

The bases are just GW’s 25mm Necromunda bases, with a few colors blocked in – mostly metallics and brass, but a bit of Vallejo Sombre Grey and some areas of Averland Sunset, then soaked in Basilicanum Grey. I was far, far, too lazy to do any hazard striping.

I started with a set of three Subjugators. The heavy armor looks mean as hell, and with a bit of converting I was able to attain peak performance and equip a model with two shields. I don’t know if this is allowed, and I doubt it has in-game benefits for any shields past the first, but it is extremely cool. The second one has a maul of some sort, and the third has what’s either a large pistol or a small grenade launcher, though in Necromunda I’m not sure there’s a ton of difference between the two.

Some grunts! I’m pretty sure most of them have combat shotguns. They aren’t as hefty as the Subjugators, but they have a real mishmash of Judge Dredd, Half Life 2, and Fifth Element future cop looks, while still being their own unique type of future cop. 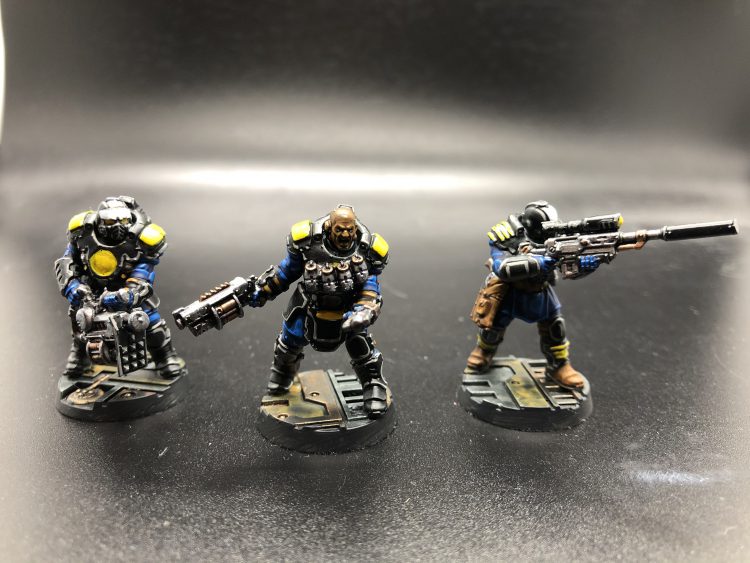 The specialists, and their Subjugator Sergeant. The battering ram thing I have no idea what it is (Fowler: this is the SLHG pattern assault ram – essentially a door breacher with an attached grenade launcher because why not), but I feel pretty confident identifying the other one as a sniper rifle. The sarge is my second-favorite model behind Mister Too Damn Many Shields, because screaming while holding two pistols and a belt of grenades sounds like something you’d want your boss doing. What I love about him is that he isn’t actually aiming the guns or shooting them, just waving them around like a lunatic.

So that’s them, the 1312th Moon Base Klaisus Precinct. I don’t have much in the way of game performance, since I haven’t and likely won’t play anything with them. The models are great though, and I had a nice time painting them. My other main armies are 40k Space Marines and Adeptus Titanicus Titans, so these were a nice change of pace, and I really enjoyed the variety of weapons and gear that Necromunda has, it makes for very customizable models. The Enforcer weapons in particular are lovely, very detailed sculpts with a menacingly practical look.

Hi folks, Fowler here. Greg asked me to take a stab at turning his pile of models into a starting list. Yelling with guns dude is your dual-wielding, hip-shooting leader. Yellface is commanding an elite squad of surprisingly melee-capable space cops. Double shield guy is really the shining star here, and regardless of loadout legality he is welcome in my campaigns anytime.