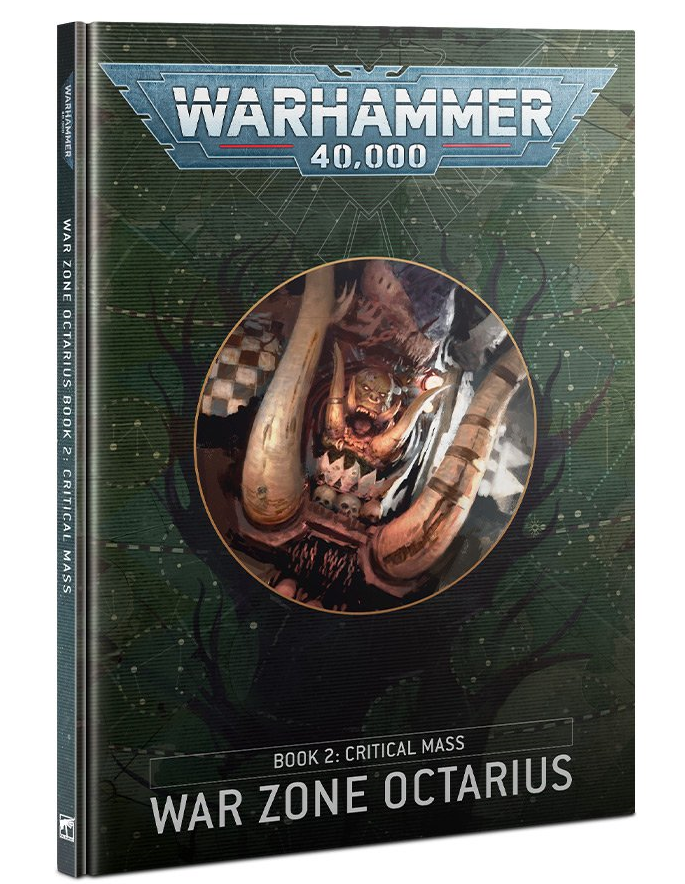 Before we dive into these Narrative Play Rules we’d like to thank Games Workshop for sending us an advance copy of the book for review.

As with the previous campaign books, Critical Mass has its own rules for running campaigns in the Octarius System. While previous campaigns have had some ties, albeit mostly tenuous, to the Crusade books released simultaneously – Rising Tide had rules for fortifications while Containment had rules for Planetstrike using them, for example – Critical Mass campaigns don’t have much to do with the multiplayer rules in Catastrophe. Where they do intersect is that unlike the two factions (Attackers/Defenders) introduced in Rising Tide, Critical Mass brings back the third faction of prior books, replacing Raiders with the more thematically named Agents of Disruption. At the very least, this will give many campaigns three sides to participate in multiplayer FFA battles like those outlined in Catastrophe.

Octarius campaigns in Critical Mass are organized like those in Rising Tide, though this time with a specified 5 phases of 3 rounds each (as opposed to the indeterminate number in Pankallis). One of the more useful features of this book is that it provides players with a number of pre-built campaign Trees using both the Crusade and Matched Play missions.

The Crusade Mission trees use the missions from the Core Rules and include escalation options, and each phase culminates in a Legendary Mission from Critical Mass. These are decent, and offer some interesting branches, but it would have been nice to see more variety here. Fortunately, they provide an empty page example to copy and fill in with your own tree campaigns.

The Matched Play Mission trees do the same thing but give you Matched Play missions from the Core Rules. For obvious reasons I’d recommend replacing these with GT Missions from the 2021 pack if you’re planning to go this route (they’re just better missions with more balanced secondary objectives), but the principle here is the same, with each tree/phase ending in a Legendary mission from Critical Mass.

Break the Stalemate puts two armies 20” away from each other with five objective markers 12” apart across the middle of the battlefield. If you’re playing Matched Play you can add a secondary that rewards killing a greater power level of enemy units. If you’re playing Crusade, your reward for winning is marking two units for greatness.

Into the Maelstrom has player-placed objective markers and sees the Attackers attempting to wrest objective markers from the defender, though these markers are heavily fortified and defended and their defenses must be disabled before they can be captured. Capture the Station sees armies clashing in the void as forces fight over a space station being struck by debris and ramming attacks as the armies inside clash. The sides of the table become impact zones and units in those zones may be hit as they move across them.

There are 18 bonuses to be claimed by players winning their missions on the campaign tree. These are a number of neat effects that range from unit buffs like Might Hero – which gives your Warlord a free CP roll once per battle to army effects like Undermining Operations, which allows you to collapse the ground under your opponents’ feet once per battle, removing Light Cover from a piece of terrain and giving it Difficult Ground and Breachable instead.

Some of these instead affect army construction; Superior Logistics reduces the CP cost of your Vanguard Detachments by 1 CP, while others may give you bonuses between games – Shadow Operations gives you a chance at an additional War Zone point after each battle if you roll a 5+ on a D6.

One of the cooler new rules for Octarius Campaigns gives the GM the ability to declare Critical Missions, nominating some battles to be critical for one or more of the campaign alliances. This may apply to all of the alliances in the campaign or a battle may only be critical for one and relatively trivial to others. Critical missions give the side they’re affecting additional goals, such as killing all the enemy Character models or putting units within 6” of the enemy’s battlefield edge. Accomplish this objective and you score extra War Zone points, plus the ability to take an extra Agenda in your next battle if you’re playing in Crusade or additional CP if you’re playing in Matched play games.

There are three sets of Crusade Rules in Critical Mass: One for general armies, one for Astra Cartographica units, and one for Orks, which primarily concerns Looted Vehicles.

Every unit that takes place in an Octarius System Campaign gains the OCTARIUS SYSTEM keyword as a campaign badge, opening it up to the ability to take Battle Honours and other rewards from the book regardless of whether it continues to fight there.

There are Ten Relics here; one each for IMPERIUM, Orks, CHAOS, T’au, Necrons, and AELDARI, while Tyranids have two – one of which can be taken by Genestealer Patriarchs – and one general relic for Psykers. Of these my favorites are The Eye of Octaria, a Chaos Relic that gives you +1 attack and +1 to wound on melee attacks, but at the end of the battle if you destroyed 7 or fewer enemy models with melee attacks during the battle then you have to take an Out of Action test. I’m also a big fan of Da Overfiend’s Second-best Basha, a S+3, AP-3 3-damage supa choppa.

More Crusade relics for more factions is always a good thing, and I’m happy to see the trend of covering many factions continue here.

The Astra Cartographica get their own Crusade rules, for some reason – three page’s worth, in fact. They get two Agendas that reward extracting key resources from the battlefield, a pair of Requisitions, and a custom mechanic, Archeotech Curiosities.

The Requisitions are, for their part, pretty fun. Dealer in Exquisite Goods (2 RP) lets you trade any relics or Crusade Relics on your order of battle and remove it, replacing it with either another relic if it was a standard relic or an Archeotech Curiosity if it was a Crusade Relic. More on those in a bit. Master of Negotiation (1/2 RP) just straight up gives you an archeotech Curiosity for your Rogue Trader unit, and the number of RP you spend increases the number of D6 you roll.

Archeotech Curiosities are basically ancient pieces of technology with cool effects. When you generate one you roll a number of D6es (1 to 4) based on what you spent to roll. There are four tables you can roll on – Weapon, Physical, Psychic, and Action augmentations – and each has different effects. These can range from giving you re-rolls to hit or wound to allowing your model to deny powers as though it were a psyker, to protecting the model by improving its Toughness or giving incoming attacks -1 to hit.

Beanith: The Archeotech table is a wild ride and it doesn’t take much to make it available to an existing Imperial Crusade force, for 3 Power level you can slap a Rogue Trader into your roster and boom, fun times abound. Now you can use Dealer in Exquisite Goods to say goodbye to various crusade relics and depending on the level of that relic, lets you roll a number of D6 on the 4 charts. For example, assuming I’ve bumped my head and wish to sacrifice my Space Marine Captain’s Legendary Relic Vortex Grenade, I would get to roll on all four charts and come up with something like

The downside is I need to name that sucker because GW wasn’t kind enough to give me a naming chart, so I’m going to call this the Ring of Steeeeve.

Finally that brings us to new Ork Crusade rules. If you’ve been pining for the return of the Ork Kustom Vehicle rules from the 8th Edition Chapter Approved books, then today’s your day. Printed in this section are rules for Looted Vehicles, Wagons, and Battle Fortresses.

Beanith: There comes a certain point of time in an Ork player’s life where they become overwhelmed with the urge to take another faction’s vehicle, cover it in glue and then proceed to roll it around in their collection of ork bitz. Occasionally GW will recognise this and reward them with rules to use them in narrative or open play games. Older salty Orks will still complain about not being able to use them in match play and burble something about the good old days. They can now add ‘There’s no points value for the vehicles, who uses power levels?’ to their grumbling.

The three different classes of Vehicles can be loosely based around three types: Transports like the Chimera; Tanks such as the Leman Russ; and finally the Superheavy using the Baneblade chassis. They’ve mentioned in the sidebar as well further suggestions such as Rhinos, Goliath Trucks as well as Devilfish.

The Looted Wagon is a Dedicated Transport option and a slightly tougher Trukk but worse in other ways. It isn’t open topped, its transport limit is 10 and costs two to three more power level to field. But it does have Ramshackle to ensure it’ll be a chore to remove from the table.

Looted ‘Eavy Wagons are a HeavySupport option and are just bad, awful bad and exist solely because of the legion of converted Leman Russ tanks. For the same Power level you can and should use any of the existing Wagons as they have far more guns and still have room to carry troops. Like the regular Looted Wagon, this bad boy gets Ramshackle and has 12 wounds.

Finally in the Lord of War category we have the Battle Fortress… and this one might actually be good? Based around the Baneblade chassis, this one is almost half the power level and almost as many weapons options. It can also transport troops with the right selection of weapons. It’s got T8 and 26 wounds, but loses Ramshackle. On the balance, it gains Unstoppable, which lets it Fall Back and Charge.

Beanith: Sadly, there’s still no open-topped rule so minus one point there. I will admit I am fighting the urge to buy a Baneblade and roll it around my ork bitz box right now though.

Each Vehicle type comes with a Kustom Red Button that once per game in your command phase, you can select for the driver to hit the ‘inviting and mysterious’ red button mounted on their dashboard. This gives you a D6 chart to roll on with random effects typically around extra movement, extra shots and, it being narrative, no effect.

Beanith: I miss randomly backfiring ork weapons so I’m slightly miffed they wimped out with the ‘no effect’ result here. I miss the days where you could accidentally sling your mek across the board with a particularly bad roll on the shokk attack gun.

TheChirurgeon: On the whole, there’s some cool stuff here. The missions are decent, the bonuses are fine, and the tree campaign structure they introduced in Rising Tide works even better here. If you wanted one book to just run a campaign out of, this one has the best rules of any of the campaign books, in my opinion. Sure, it doesn’t have the ability to give your opponents scars for losing – a personal favorite from the Book of Fire – but the rest of it’s a very solid framework. The other Crusade rules are whatever. Looted vehicles are fine, if a little unexciting.