Happy new year from Ruleshammer! This week we’re covering some more questions submitted by you, the readers, and our patrons on the Goonhammer Discord. Remember the banner below will take you to the Ruleshammer 9th Edition Compedium, for all the questions I’ve answered for the last few months!

Q: How do deployment abilities like Death From Above and Sky Strike interact with the new Genestealer Cults Ambush Marker rules? These abilities are not moves and tend to only care about the distance from enemy models so presumably if there is a marker on the table there is nothing stopping you using a deep strike effect to land on it and deny the Cult player using the marker? – David

Forunately, the new rules in Codex: Genestealer Cults cover for these types of interactions in two ways. Firstly you just can’t set up models within 9″ of the markers, they have that specifically in the new rule.

Enemy models can’t be set up or moved within 9″ of the centre of any of your ambush markers.

In addition to that, markers are revealed in the first battle round, either during the GSC player’s command phase if they are going first, or at the end of their opponent’s movement phase. Which limits the units that actually can come in from reserves while Ambush Markers are still on the board to pretty much just Drop Pods, and those are blocked by the earlier part of the rule from setting up closer than 9″ to the centre of the marker.

Core – Can I remove parts of my model during a game to make it fit in terrain?

Of course you can’t. Models must be able to physically fit where they are being placed. You can’t start removing parts to make this true. I’ve seen in claimed that there’s no rule against doing this however there is also no rule saying you CAN do this, so by default you can’t. That is how rules to games often work. They are lists of things you can do and usually only ban things the rules have said you can do. For example; You can shoot with your units, but you can’t shoot with them if the unit has fallen back unless it is Titanic or you have another rule that says you can shoot even if the unit Fell Back this turn. This all started with the rules giving units something they can do though. This way Games Workshop don’t need to write rules for every thing conceivable that they don’t want you to do, like there’s no rule against removing terrain from the board, putting your models on their sides, stealing your opponent’s dice, etc. There doesn’t need to be because there are no rules that say you can do these things to begin with.

I’ve covered some esoteric interpretations of Wobbly Model in the past and that Hint/Tip clearly states that it expects models to be able to physically be placed.

Hints and Tips – Wobbly Models
Sometimes you may find that a particular terrain feature makes it hard for you to place a model exactly where you want[1]. If you delicately balance a model in place, it is very likely to fall as soon as someone nudges the table, leaving your painted model damaged or even broken. In cases like this, provided it is still physically possible to place the model in the desired location[2], you may find it helps to leave a model in a safer position, so long as both players agree and know its ‘actual’ location. If, later on, an enemy model is shooting the model, you will have to hold it back in place so they can check visibility[3]. 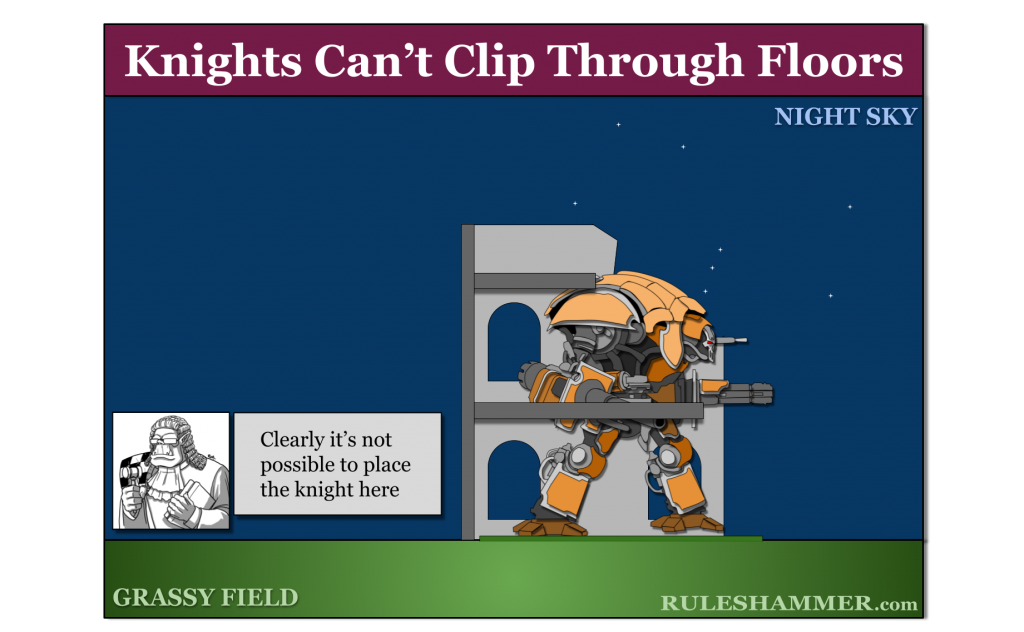 Q: How do effects that add x to advance rolls interact with rules that allow you to automatically advance a distance? For example, Metallica has a stratagem which says, “Do not make an Advance roll. Instead, until the end of the phase, add 6″ to the Move characteristic of that unit.” Am I correct in thinking that this would mean that it would not stack with buffs to the advance roll, such as the Magi buff of +2 to advance rolls?

Yes, I think I agree with your on this one – if you don’t make an an Advance roll then these is no roll to which you can add 2″. I think this might partially be why these abilities don’t just give you an Advance roll result but instead modify the unit’s Movement characteristic.

There are however some newer abilities such as the Solar Watch fighting style that adds 1″ to Advance and Charge rolls or adds 7″ to a units movement characteristic if they have the Implaceable Vanguard ability rather than the normal 6″ that ability provides.

Orks/Core – Can units that have disembarked from a transport that moved, move?

Yes. The current flavour of the month for this question is Trukk Boys, which I covered a few weeks ago but I’ve had several people ask it since so felt it worth mentioning. The short reasoning is that while embarked, units count as making the move the transport they are in this only applies to units that “are embarked” in the present tense. If a unit stops being embarked they stop counting as having made the same move as the transport they disembarked from.

SM – Command Oratory; which prayers can it use?

This one causes almost monthly discussion at Goonhammer HQ, but current the consensus is that it needs to be a litany the Chaplain already knows. However we don’t have any specific concrete wording for that, so we’re instead relying on the consensus of TOs and that similar abilities released since this one have included “that they know” in their ability descriptions. So while this isn’t a 100% RAW answer, it’s what I’d suggest.

Necrons – Can a unit move after using Veil of Darkness?

No. There’s a Rare Rule the explains why. First of all Veil of Darkness is a rule that repositions a unit:

which is covered by a very specific and extensive Rare Rule copied almost straight from the FAQs of 8th edition, which is a bit odd as it one of the Rare Rules we’ve had from day one that probably would be nice to have in the main rules somewhere. Without it there it’s not present in the Core Rules at all.

So Veil of Darkness units are considered to have moved already like Reinforcement units, and can’t move that turn for any reason. This is also the Rare Rule that prevents units from being brought on as Reinforcements and then made able to move again by abilities such as Warp Time or the Swarmlord’s Hive Commander ability. It prevents deepstrike or repositioned units from getting closer than 9″ for trivially easy charges.