Aircraft vary but most of them have some version of the supersonic rule;

Supersonic: Each time this model moves, first pivot it on the spot up to 90° (this does not contribute to how far the model moves), and then move the model straight forwards. Note that it cannot pivot again after the initial pivot. When this model Advances, increase its Move characteristic by 20″ until the end of the phase – do not roll a dice.

This rule specifically gives you a 90° turn for free before you start the move, and then you measure from that position rather than where the model was at the start of the turn. They also don’t need to avoid obstacles in the movement phase because of the FLY keyword. 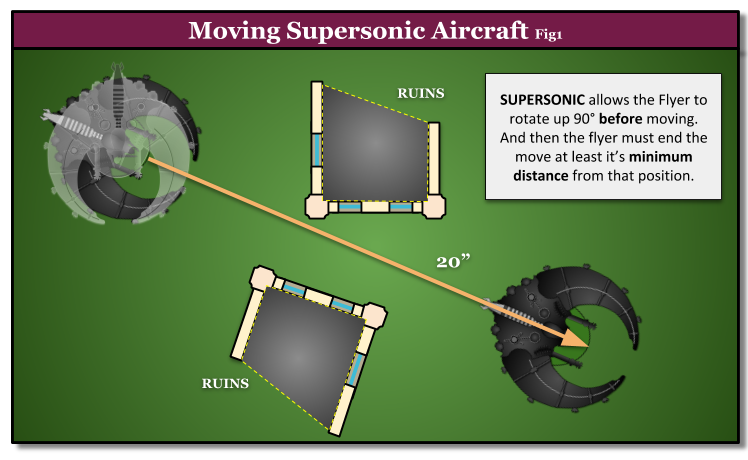 If the aircraft does not have the supersonic rule or a version of it then it can move normally, but it can’t move in a loop and claim to have moved it’s minimum move because of this specific part of the rule.

…in its Movement phase, all parts of the model’s base must end the move at least that far from where they started

Although Aircraft models have an Engagement Range (pg 4) like any other model, the following rules and exceptions apply to it – this will account for the fact that typically Aircraft models are soaring overhead and not skimming along the ground.

If, when an Aircraft unit is selected to Move in the Movement phase, any enemy units are within Engagement Range of it, that Aircraft unit can still make a Normal Move or an Advance (i.e. it does not have to Fall Back or Remain Stationary).

If, when a unit is selected to move in the Movement phase, the only enemy models that are within Engagement Range of it are Aircraft, then it can still make a Normal Move or an Advance (i.e. it does not have to Fall Back or Remain Stationary).{CORE PDF Page13]

This is a fairly wordy rule, but here’s a few key parts.

Also remember from that Heroic Interventions, Pile Ins or Consolidation moves ignore Aircraft when determining the closest enemy model unless they have the FLY keyword.

Aircraft are TECHNICALLY immune to being Charged

This section of the AIRCRAFT rules leads to a slight issue.

As models can’t end within Engagement Range of them when making ANY kind of move, with no exception for models that can Fly.

Wings: We obviously do not think this is the intent or endorse playing like this – this will be swiftly fixed, as it’s clear from other rules that FLY units are still supposed to be able to melee AIRCRAFT. Either there’s a missing “in the movement phase” here or “any kind of move” is meant to be a shorthand for “Normal Move, Advance or Fall Back”.

As such here is another Ruleshammer suggested fix for this issue.

It’s currently not clear if a model that can use a bomb ability, can do so in a turn it leaves the board for strategic reserves. For now generally models not on the board can’t use their abilities (except if that ability specifically mentions it like a reinforcement ability). So It’s probably best to play that bombers can not bomb when leaving, perhaps because their attention is focused elsewhere that turn. Alternatively discuss this with your opponent before the game.

UPDATE 2020-10-01: After further debate; essentially I’m not sure what the answer is or what is should be. My hesitance to rule it one way or the other is based on two issues;

Those two issues lead me to write that I’m not sure there’s an answer but that for now I felt “no” was the safest. Maybe that was wrong but it avoided the “feels bad” of being attacked by a model you can’t possibly retaliate against that turn. In more narrative terms of  “what bombers do” the argument is strong that they should be able to bomb. However I’d prefer that to be codified in a change to the Strategic Reserves rule to make the move definitely a thing, and potentially to change the bombing rules to be a bit like Valkyries where it’s a thing that they can do at any point during their move.

Moving an Aircraft Half Distance

There are a few abilities and rules that require a model to move half its max distance in order to benefit, for aircraft this is potentially unclear as they do have two movement characteristics. However it does only have a single maximum move, so the widely accepted interpretation is that the model must move less than half of that max, but more than its minimum. Some players have suggested it must move a distance halfway between its minimum and it’s maximum but I don’t think that’s supported by the rules as they are written.

An aircraft can still be out of sight, it’s just rare and they don’t benefit from the Obscuring rule.

There was some confusion about obscuring as it says the 18+ wound and AIRCRAFT models “are visible”, which seemed to indicate that even solid terrain didn’t block for them if it was Obscuring. This was a bit odd. It maybe made sense for AIRCRAFT that are meant to be high up but if the rule for seeing them was representing them being high up then it becomes even more odd that the measuring range rules don’t do this (like maybe treating them as if they were 9″ further away so that Flamers aren’t amazing Anti Air weapons). Games Workshop have since then almost addressed this in the FAQs…

Obscuring and Dense Cover are two terrain traits introduced with ninth edition that interact with visibility. These rules do not overwrite the normal rules for determining visibility, though – they are in addition to them. Specifically, even though the Obscuring rules state that Aircraft and models with a Wounds characteristic of 18+ can be seen through Obscuring terrain, they are still only visible (and hence eligible) targets if the firing model can physically see them (so if the terrain in question is solid and opaque, they are still not eligible targets).

I say they’ve almost addressed it, because they said all that (and some other stuff about Dense Cover) but haven’t actually fixed the wording of the rule. So we know how it should work, which is fine we can play this correctly now at least, but the rule still says something else.

Relentless Expansion an Aircraft into Reserves

Hi, can necrons use ‘relentlessly expansionist’ (the pregame 6 inch move) to put an aircraft into strategic reserves? (E.g. you move your night scythe into reserve ready to bring it on T2 and deliver your lychguard bomb).

I’m not sure if the minimum move of 20 inches would stop this, or in fact if you could even move a flyer off the board and into reserves, as the rule says that aircraft can move into reserves in their movement phase. Thanks! – True son of Dorn

Okay so there’s a few things to unpack here. I think best not in the order you’ve asked though. For those not in the know here’s the Relentless advance Necron trait.

At the start of the First Battle Round, before the first turn begins, units with this code can make a Normal Move of up to 6”.

Does an Aircraft Minimum move cause any issues?

No. This is because the AIRCRAFT minimum move requirements are during “its movement phase”.

The first is the model’s minimum Move characteristic – in its Movement phase, all parts of the model’s base must end the move at least that far from where they started. – [Core Rules PDF Pg13, GT2020 Pg66]

So AIRCRAFT with a minimum move can still make the up to 6” move without automatically putting themselves into Strategic Reserves because they can’t move their full minimum.

But can I choose to put the Aircraft in Strategic Reserves if I want to?

Actually also no, mostly for the reasons you found. They are only moved into strategic reserves in the movement phase. The wording does get a bit confusing though so my confidence on this is only 99% specifically the part starting “similarly”.

It would be easy to read that section and come to the conclusion that if AIRCRAFT can’t move their minimum they are automatically put into Strategic Reserves. However the key word there is “similarly”, encompasses the other criteria of the previous clause; having your army be battleforged and that it’s during the AIRCRAFT’s movement phase.