Although we love Warhammer 40,000, the game’s complexity can be daunting, particularly for newer players. In Ruleshammer, we look at the nuances of the game’s rules and how they affect gameplay, clearing up potential issues and helping make sense of some of the game’s less common interactions. In today’s Ruleshammer, Rob “Vre’kais” Chilton covers what defines an aura and how they interact with other rules.

What is and isn’t an Aura?

Auras are a key part of 8th and represent a lot of power and utility on the board, but what defines one? First lets look at the rules;

Aura Abilities Some units – usually Characters – have abilities that affect certain models within a given range. Unless the ability in question says otherwise, a model with a rule like this is always within range of the effect.
[CORE RULES pg5]

So any ability that affects models within a certain range is an aura. This also helps us define which abilities are not auras; obviously all the abilities without a range aren’t auras, but also abilities that affect models (or more often attacks) from outside a certain range. For example the Alpha Legion Warlord trait;

ALPHA LEGION – HIDDEN IN PLAIN SIGHT – Your opponent must subtract 1 from hit rolls that target units with this trait if they are more than 12″ away.

TAU – GHOSTKEEL- Electrowarfare Suite: Your opponent must subtract 1 from hit rolls for models attacking this model from more than 6″ away.

These have an effect but not on models or units within a range, instead models outside it are affected. It’s a subtle distinction but so many of these abilities are forms of stealth that incur a -1 to hit penalty. If they were auras then they would not work on units not on the board, such as those inside a transport with some way of shooting out. I’ll cover this exact interaction in more detail later on.

Figuring out who is affected

IMPORTANT NOTE: Models are always within range of themselves!

Something that new players can miss is that models often affect themselves with their auras, so long as they meet the Keyword criteria for being affected.

Here we are again, looking at the subtle differences between “within, wholly within and entirely within”. It crops up like an Genestealer Cult infestation, never truly gone just out of sight. The wording used in Aura abilities is usually quite clear but it’s not without its confusing bits.

ORKS – Big Mek – Kustom Force Field: Friendly <CLAN> units have a 5+ invulnerable save whilst they are wholly within 9″ of this model.

So this ability only affects units that are wholly within range, meaning that every model in the unit is in range and no part of any models is outside the 9” limit. Also remember that you check this throughout being shot at by a unit, in a similar way to gaining cover. 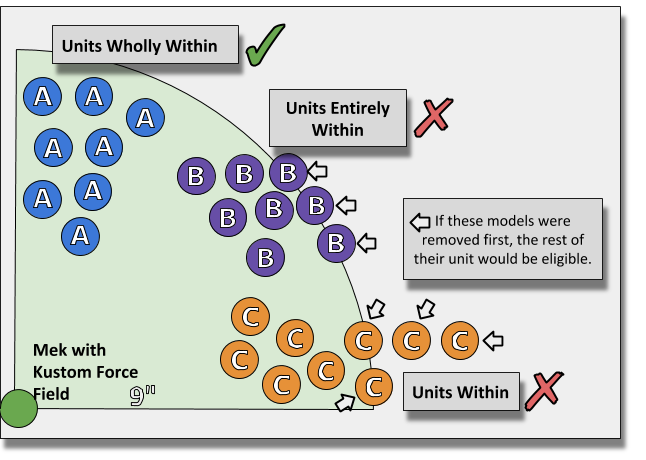 Some abilities are less demanding, take this Space Marine ability below.

SPACE MARINES – Lieutenant – Tactical Precision: Re-roll wound rolls of 1 for attacks made by models in friendly <CHAPTER> units whilst their unit is within 6″ of this model.

The “whilst their unit” bit is key here, so it affects all the models in a unit if any of them is within 6”. 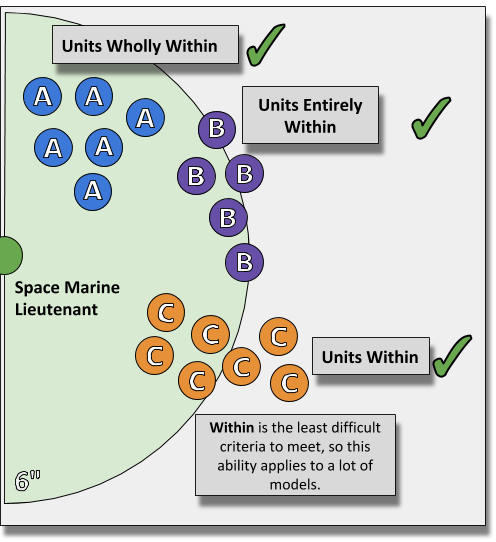 Some abilities are just the models within range as well, and auras are not exclusive to characters.

BLOOD ANGELS – Heirs of Azkaellon: You can re-roll failed hit rolls for models from this unit if they are within 6″ of a BLOOD ANGELS Warlord.

The key wording here is that is the models from this unit if they are within 6”, rather than if the unit is within. So only those models gain the ability.

Friendly or Other Friendly?

Like I mentioned earlier, most auras affect the model with the aura itself but not all of them — there’s a few that have specific language to determine this.

The key part here is the “other friendly”, these abilities require the presence of an example of the keyword other than the unit in question. In practice this particular ability results in Onager Dunecrawlers getting to re-roll 1s for their Invulnerable saves when they work in pairs/groups. If the ability didn’t have the “other friendly” wording then setting it up as an aura would have no point as it would always be in range of itself.

Identifying if an ability affects models or units can be further complicated by the fact that units don’t have weapons, models do. So a rule can’t say Units with Bolters or Units with Power Fists because that’s not how weapons are assigned. So some abilities will say Models in Units within when an ability relies on something only a model has such as a weapon, or that only models can do such as make attacks. You do select units to attack with but the rules make it clear that it’s the models actually attacking, which is a frustratingly pedantic detail but it does help to clear things up. For instance the Tau Volley Fire ability below mentions models because of it’s weapon criteria.

Tau – Cadre Fireblade – Volley Fire: Models in <SEPT> units within 6″ of any friendly <SEPT> Cadre Fireblades may fire an extra shot with pulse pistols, pulse carbines and pulse rifles when shooting at a target within half the weapon’s range.

It specifies the weapons models are allowed to do this with, but still affects all the models in units within 6” of the Fireblade.

The Locus strats are a good example of abilities to give an Aura to a unit midgame/midturn. For the most part this is fairly straightforward but I’ve singled them out here because of the pretty ridiculous DAEMON keyword. The strat isn’t too complicated itself.

CHAOS DAEMONS – LOCUS OF FECUNDITY Nurgle Daemons Stratagem Use this Stratagem at the start of any phase. Select a NURGLE DAEMON CHARACTER from your army– until the end of the phase you can re-roll Disgustingly Resilient rolls of 1 made for friendly NURGLE DAEMON units within 6″ of that model.

So you pick a NURGLE DAEMON CHARACTER and it now has a 6” aura, simple enough. The confusion comes from DAEMON being both a Faction Keyword like IMPERIUM and a non-faction keyword like CHARACTER. For instance on models such as the Daemon Prince of Nurgle.

GW FAQed these abilities to only be used on units with the DAEMON faction keyword.

A: These Stratagems can only affect units with the Daemon Faction keyword. [CHAOS DAEMONS FAQ Pg2]

That’s not the end of it though, whilst the Stratagem itself can’t be used on the Daemon Prince of Nurgle, if it was used on a nearby eligible character the Prince would benefit from the aura that the character now has. The aura applies to all units with NURGLE and DAEMON keywords, it doesn’t specify that the units affected need to have the DAEMON faction keywords like the FAQ for the stratagem.

There are a growing number of abilities that prevent units from deep striking within a certain distance of the unit, here’s an example.

SPACE MARINE – Infiltrators – Omni-scramblers: Enemy units that are set up on the battlefield as reinforcements cannot be set up within 12″ of this unit.

The key part of this is that it works only on units that are set up as reinforcements, which is the same thing that triggers wargear auras like Early Warning Override or allows for stratagmen auras like Auspex Scan. However the units that get out of a drop pod, tyrannocyte etc have specifically been FAQed as not being reinforcements, they’re just forced to disembark as soon as the transport is deployed. Also that because it’s not affecting units within a range but instead forcing units to deploy outside it, it’s not an aura.

Q. Some rules – such as Early Warning Override in Codex:T’au Empire, the Ever Vigilant Stratagem in Codex: Adeptus Custodes, and the Auspex Scan Stratagem in Codex: Space Marines – allow units to shoot at enemy units that have just arrived on the battlefield as reinforcements, as if it were the Shooting phase.

Q2. If the unit arriving as reinforcements has another unit embarked inside it which must disembark after it has been set up (such as units embarked within a Drop Pod, or a Tyrannocyte), Can the firing unit shoot at the unit as it disembarks?

A: No – though the unit can shoot at the Drop Pod/Tyrannocyte before the units inside disembark. [CORE RULES pg11]

As such counter intuitively the Drop pod needs to be more than 12” away from a unit with Omni Scramblers, but the unit inside isn’t affected and would still be able to disembark at 9”.

For example such stratagems as Vox Scream:

CHAOS SPACE MARINES – VOX SCREAM – Night Lords Stratagem – Use this Stratagem at the end of your Movement phase. Select one enemy unit within 18″ of any NIGHT LORDS units from your army. Until the start of your next Movement phase, enemy units cannot be affected by any of the selected unit’s aura abilities.

So if facing a unit with the Tocsin of Misery ability:

Vox Scream would not prevent this ability from working. It’s important to remember that it only prevents effects directly on enemy models and only works on auras. As such lets see how this ability interacts with the abilities we’ve discussed above:

Note: When I first read Vox Stream stratagem I for some reason thought it was from the perspective of the models you used it on, rather than the controlling player. As in if you had a Space Marine aura that buffed models friendly to it it would be unaffected, but one that affected enemy models would be disabled. I’ve since realised from feedback that it’s from the stratagem users’ perspective, so that same Space Marine aura would no longer affect the models friendly to it and other auras would work as usual.

LINK Last week I discussed Open-Topped vehicles and how those rules can differ from codex to codex. I want to elaborate a little on how auras apply though and this is where the aura or not an aura distinction really comes in. First of all let’s pick an example of an Open-Topped rule again:

And let’s check the FAQ on auras regarding open topped vehicles or transports in general.

Q: If a transport with the Open-topped ability (e.g. a Trukk) is within range of an aura ability, are units that are embarked upon that transport affected by that ability?

Honestly I’d have preferred a bit of a longer answer to this question but it’s what we have. Essentially models that aren’t on the board, even if they can act like they are like those in the Trukk, aren’t affected by any aura abilities. So if you had an Ork unit inside a Trukk then abilities such as the Freebooters Competitive Streak Klan Culture would not apply.

FREEBOOTERZ: COMPETITIVE STREAK Add 1 to hit rolls for attacks made by models with this kultur if any other friendly unit with this kultur within 24″ has destroyed an enemy unit this phase.

However they can still be affected by abilities that aren’t auras such as the Alpha Legion Trait we discussed at the start of this article. So they would not be immune to the -1 to hit penalty that ability or other similar abilities impose.

I really hope that has helped to explain the basics of auras. As ever If you want your rules debate answered you can submit questions both on reddit, or via this form. Or drop us a note in the comments below or email us at contact@goonhammer.com.