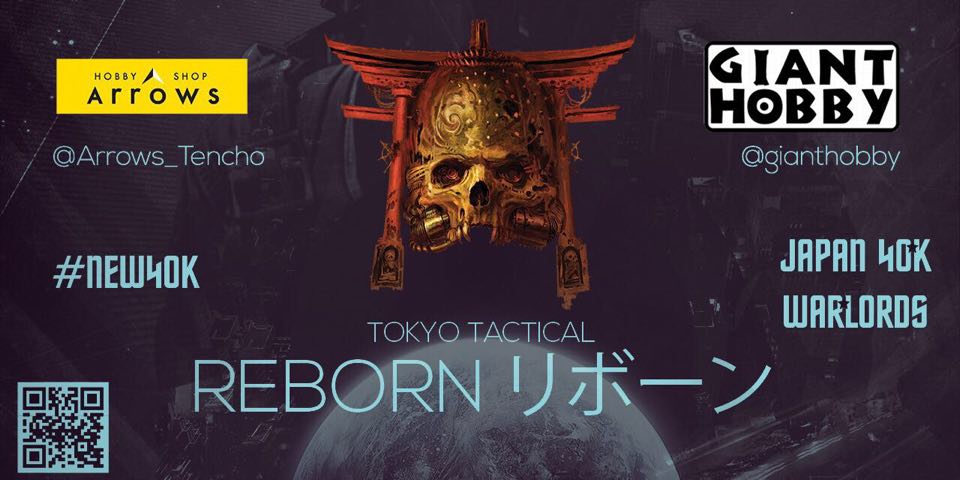 We’ve previously talked with David Moss about the state of 40k gaming in Tokyo and their postponed Tokyo Tactical event. In today’s tournament report, special guest author David Moss is back to talk about how the event

It goes without saying that the pandemic made things very difficult with regard to setting up an event, and that’s on top of the usual difficulties in setting up a bilingual event in the land of tiny and expensive venues. But, we finally did it!

First off, let’s talk safety. In order to ensure players and tables were well spread out, maximum attendance for the event was more than halved – from 40 players to 14 – while we kept the large venue. Players were required to wear masks at all times, bottles of hand were provided at every table, the room was well ventilated, and during the entire event sanitizer mist was sprayed over clocks and all surfaces. It’s at times like this that Japanese bowing wins over shaking hands!

So on to the games then. You can check out our mission pack here but in summary we played standardized terrain across three missions of Scorched Earth, Vital Intelligence (yes that map broke some brains), and The Scouring. 2,000 point armies with three hours per game. The turnout was incredibly varied for only 14 players with Dark Angels, Blood Angels, Space Wolves, Ultramarines, Imperial Guard, Ad Mech, T’au, Death Guard, Daemons, Tyranids and a pure World Eaters army battling it out. I was especially happy to also see players from the many different gaming communities here, too. Yes the numbers were low but this event really represented some of the best gamers from across all of the Tokyo area.

Austin Powers and his “Everyone Hugs Azrael” list closely beat the Space wolves of Uo-san to win the event and this is what he had to say:

Approaching this tournament, I designed my list to do two things: First, I wanted durability. Knowing that everyone was going to be gunning to take down space marines, Dark Angels are able to access 4+ invulnerable saves everywhere in their codex (special thanks to you Azrael!) and this puts me nearly on the same level as custodes for survivability. The second thing was the idea of dispersed firepower.  Back in 8th, it was better for you to just cram all your firepower into one or a few units to maximize stratagem efficiency.  By spreading out your firepower over several smaller units, you’re able to project force over a greater area on the table while simultaneously making it more difficult for your opponent to remove your threats.”

From a judge‘s point of view there were two main points worth mentioning: Firstly, man oh man did I really want to play this time! It looked so much fun! Secondly, I was really impressed with the rule set and how it is presented in 9th. Many of our players had only a couple of practice games of 9th before the event and there were only a few games where players spoke their opponent’s language enough to explain rules. However, nearly all the games finished on time and just by pointing at the same page in the English/Japanese books nearly all questions were instantly resolved. This bodes really well for the future.

The event was a huge success and I’d like to thank our corporate sponsors and also our private supporters who although they could not attend the event still donated to support the event and the future at Tokyo Tactical. They are the real heroes of the day!

So next for Tokyo Tactical we are planning events of around the same size to muster the JTC team to send to the WTC, and Crusade events may well be happening soon too. We also tested our live streaming at our Twitch channel and it worked well so we plan to live stream future events too. It may be a long time before we can run larger events but we plan to stay very active for sure.

If any of you are going to attend or plan events then best wishes to you all. Keep it safe, have fun and enjoy all those vehicle explosions that you can’t reroll anymore. From a judge’s POV they are the highlight of the day, ha ha!