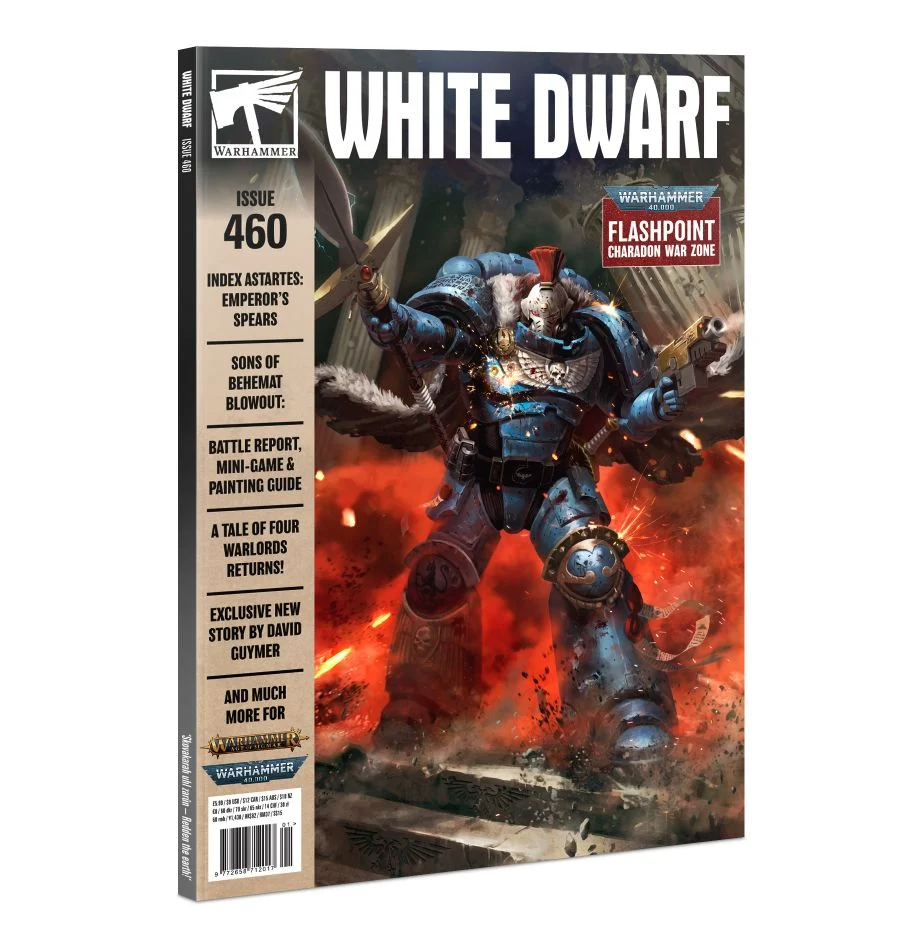 White Dwarf 460 hits the streets today and in a similar vein to other recent White Dwarf releases, it’s got new rules for 40k Matched Play. Specifically, they’re introducing rules for a third Space Marines chapter this year, giving us updated rules for the Emperor’s Spears, a chapter of Ultramarines successors made famous in the Aaron Dembski-Bowden book Spear of the Emperor (it’s a great read, and worth checking out if you haven’t already). While we’ll be digging into full detail on these rules in a special future Start Competing article, it was worth going over what rules the Emperor’s Spears have today and the impact we think they’ll have on the competitive scene.

The rules for Emperor’s Spears give us a new Chapter Tactic (well, kind of), three new Warlord Traits, two stratagems, and three relics.

The Chapter Tactic: Redden the Earth

This is actually the second time the Emperor’s Spears have gotten rules for those of you keeping track at home. Their first rules showed up as a pack-in for the special edition release of Spear of the Emperor in 2019, a custom chapter tactic released a few months before the second 8th edition Space Marine Codex called Redden the Earth, which gave them the ability to score 2 hits in melee each time they rolled an unmodified 6 to hit. In these new rules, the Chapter Tactic returns, but modified. It now combines the Whirlwind of Rage and Hungry for Battle Successor Chapter Tactics, giving them roughly the same feel as before (unmodified hit rolls of a 6 cause an additional hit on a turn when an Emperor’s Spears unit charges, is charged, or intervenes), plus a little extra power from getting +1 to Advance and Charge rolls.

Additionally, the Emperor’s Spears are called out here as explicitly being an Ultramarines Successor and as such use the rules from Codex: Ultramarines. This isn’t a surprise – Spear of the Emperor tells us who their parent Chapter is, and the Codex Supplements are pretty clear that in that case you should stick to using that one – and is more than fine, as the Ultramarines have very powerful rules and relics. In particular, the melee-oriented Emperor’s Spears get a surprising amount out of being Ultramarines – as we’ll see later. First, though, let’s talk about what makes them unique.

These are all pretty good! Sentinel of the Veil has real legs and can be a great secondary warlord trait on a smash Chaplain or something similar. Bloodied but Unbroken is neat but not particularly exciting. And Tribal Heritage has some potential, given that it lets you use Combat Revival or Commanding Oratory for free on an Apothecary (if you didn’t make him a Chief Apothecary, for some reason) or Chaplain, or throw out Only in Death Does Duty End to punish an opponent in a pinch.

There is one thing to bear in mind here, though. In the Blood Angels Codex, the “get a second Warlord trait” stratagem specifically calls out Flesh Tearers as getting their own traits, and not Blood Angels ones. This was a change for the 9th edition supplements – the analogous stratagem in the Imperial Fists book doesn’t include that wording, and tells you you must use Imperial Fists traits when using it, and so Crimson Fists cannot double up using their own trait list but have to use an Imperial Fists one instead. The reason for bringing this up is that Emperor’s Spears are in the latter position, because the Ultramarines book has the 8th-edition style wording. This is a good thing in one sense – because it means you also get access to the Ultramarines traits by a side route, and there’s some good ones in there – but it does change how you need to plan to get traits on characters. If you want an Emperor’s Spears trait it will need to be on your Warlord as his “primary” trait (and your secondary one, if you pick one, will be Ultramarines), or you need to assign one with Hero of the Chapter.

As well as Warlord traits, the Emperor’s Spears get two stratagems. Skovakarah Uhl Zarun! is used in the Fight phase to buff a Core or Character unit that charged, was charged, or intervened. They get +1 to wound rolls on melee attacks, for either 1CP for 5 models or fewer, or 2CP for more. Fight as Brothers will cost you 2 CP, but gets an interesting effect – you pick one of your infantry units to fight, and pick one enemy unit that it is in Engagement Range with that unit and one or more other Emperor’s Spears infantry units. Until the end of the phase, all Emperor’s Spears Infantry units get re-rolls to hit for melee attacks against that enemy unit. There’s quite a lot of conditions here, but it’s a powerful buff – you can basically assign Chapter Master style rerolls to every Spears Infantry unit in combat with a particular enemy unit, and well, it’s not like Space Marines are lacking for strong infantry melee units right now.

Finally, Emperor’s Spears get three relics. The Druidic Talisman can be given to a Librarian or Chaplain and gives you a once-per-turn re-roll on a psychic power attempt or recite a litany. The Beast-hide Cloak gives your character -1 to incoming damage. The Horizon Blade replaces a power sword with one that’s S+2, AP-4, 2 damage and that bumps up to D3 and AP-5 in a turn in which you make a charge move or perform a heroic intervention. These are all pretty great – a Master of Sanctity with re-rollable 2+ litanies fails just 3% of the time, and we all know how powerful litanies are in current 40k. The Horizon Blade is a relic weapon that actually shades into “worth it”, being competitive with the Burning Blade, and the Beast-hide Cloak is straightforward but useful for keeping a character alive that little bit longer.

There’s no other way to describe the Spears except as having an embarrassment of riches. Their unique position gives them access to the highest number of Warlord traits, relics, and stratagems in the game, because they get to draw from the base Codex: Space Marines, the full suite of Ultramarines options (with reference to how Exemplar of the Chapter interacts with Warlord traits as described above), plus unique ones of their own. Normally the price of having a successor included in the supplement is that the parent Chapter loses out on some stuff (as in the Imperial Fists and Blood Angels books), but thanks to being included in White Dwarf instead of the book the Spears get the best of all worlds.

This is doubly so because what the Spears get here is actually pretty great. In particular, the stratagems are strong – Skovakarah Uhl Zarun is a little more limited than equivalents in other codexes by being melee-only, but you want to be fighting anyway and +1 to wound is a powerful effect to have. Fight as Brothers also gives you a bonus because it applies to all infantry and not just CORE – nice for Centurions, but also handy for giving characters the re-rolls to hit that they often miss out on. The relics are also decent – the Druidic Talisman makes a Master of Sanctity stupidly reliable, and of course what we needed from Space Marines was more reliable Chaplains. Though the Chapter tactic isn’t unique, it’s a good one, getting your units around the table a little better and making them hit harder when they get there. It’s basically what our own Cyle was already running as an Ultramarines successor, and now you can do that and get more stuff as well.

In terms of making the most of it, it’s worth remembering not only what the Spears have themselves but also what the Ultramarines offer them. Being an Ultramarines successor puts the Spears in an interesting position – melee Chapters mostly have quite melee-focused books, a la White Scars/Blood Angels/Black Templars, with minimal bonuses to shooting. Spears get all the good shooting buffs that Ultramarines offer as well as their own melee-enhancing abilities, which makes for a powerful combo.

The most obvious thing is dipping into the relics section with the Seal of Oath, which is nice for the Spears as it’s Special-issue Wargear and therefore easily available to them. It’s a powerful relic anyway and it gives them a helpful capability, either being useful for saving CP on Skovakarah Uhl Zarun, or (more likely) giving them the ability to use their shooting support to pick one key target and remove it from the table – we’ve already seen Ultramarines lists making heavy use of grav-cannon Devastators, which can take advantage of the chapter doctrine and the Seal’s ability to replicate the old Gravitic Amplification stratagem to lay waste to a specific target, and that works just as well here.

Less easy to acquire is The Standard of Macragge Inviolate, requiring you to spend at least 1CP to be able to access it, but it’s a huge buff – +1 attack is powerful all the time, but especially so with guys who are kicking out exploding melee hits at +1 to wound. A block of Vanguard Veterans with an Ancient nearby toting this is a truly terrifying prospect.

Being able to access the Ultramarines Warlord traits is also decent – Nobility Made Manifest is a key pick here, giving you a bubble of Heroic Intervention, and the stratagems also offer some helpful capabilities, including being able to fall back and charge, drop into the most helpful doctrine, and of course redeploy key units.

Overall it’s a very strong package. Whether “melee Ultramarines successor with some White Dwarf rules” becomes the flavour of the month rises to the top of the Space Marine meta is an open question – there’s a lot of great Marine rules out there – but what we can say for sure is that no Emperor’s Spears fan is going to be disappointed by these new rules, which do a great job of emulating the Spears’ fighting style and adding extra flavour to the Chapter, while also making them surprisingly competitive on the table.