You Should Play Knights of the Old Republic II. Just Maybe Not On This Device 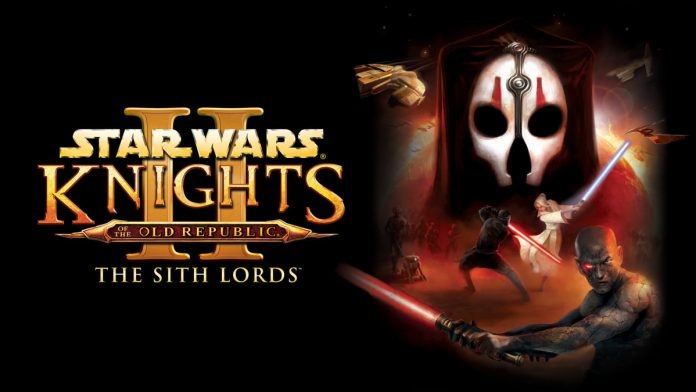 It’s a good game, but I can’t recommend you buy it.

Star Wars Knights of the Old Republic II: The Sith Lords is on the Nintendo Switch, thanks to a port from Aspyr! This game was originally released in December 2004 after a brutally abbreviated development cycle. It is without question in my mind superior to the original, more successful title, which was done by BioWare and was one of the feathers in that studio’s cap leading to the studio’s purchase by Electronic Arts in 2007 and subsequent long and slow decline. We’ve discussed that elsewhere. KOTOR II was made by Obsidian Entertainment, and is one of the bigger “one that got away” stories of its time: a brilliant licensed property CRPG that sought to undermine and dissect all the core themes of the IP thanks to lenient oversight and, frankly put, no Disney undertakers wandering around and destroying any hint of a creative spark in the project…that also hit the market maybe 80% complete.

And it’s a fantastic 80%. It might be the best 80% of any classical CRPG of that era; it’s certainly the best 80% of any Star Wars game then or now. When modders got into the files and worked their magic, they got it up to around 90%, and that was even better. But this, on the Switch, is only the 80% that Obsidian gave you on that game’s release — without any frills or improvements, and with a couple of game breaking bugs.

The premise is really very simple: you’re a Jedi who has suffered plot amnesia, and thus has to reroll your character, who was presumably very competent in a previous life, from level one. The game is built off of the d20 system that Wizards of the Coast released via the Open Gaming License in 2000 thanks to a decision-making ethos in the company that put community over pure nickel-and-diming short-term rent seeking, instantly cemented the d20 system as the tabletop and computer RPG standard for the next decade, and was seen as a monumental failure by the business people in charge because it denied Wizards a lot of imaginary short-term profits they dreamt they were entitled to and also led to Pathfinder. All of the nonsense surrounding the fourth edition of Dungeons & Dragons could take up an entirely separate article; for now, all that’s necessary to know is that KOTOR II is basically running a homebrew hack of d20 modern. As long as you know how to build a wizard in that heuristic and recognize that Charisma is not in fact a dump stat in a CRPG, you will go far here.

You wake up in a notoriously long tutorial level that introduces all of the game mechanics you’ll need to know…and some that you don’t — for example, there’s an entire power based around premonitions in the Force that will give you a bad feeling and tell you when to save, but the game has an autosave feature and the actual plot chain really never references the power again. You meet Atton Rand, the snarky, self-absorbed, and cripplingly withdrawn and mistrustful smuggler that pilots your ship throughout the game, and Kreia, a one-dimensional villain with incredibly good voice-acting and script-writing who gets by entirely on trolling. I’m discussing her whole arc and premise here because you can’t actually get into any discourse in 2022 about this game without also dealing with the idea of Kreia as the grandmistress of understanding the Force. If you’ve ever seen any of those really unintentionally (and then intentionally) funny memes about the Gray Side of the Force, those are all basically premised off of the teachings of Kreia. The teachings of Kreia are that whatever decisions you make in this game, Light Side or Dark Side, are wrong. She’s here to play for the other team every single time, regardless. This would be bad if Kreia was actually the insightful bodhisattva that she portrays herself as; in the end, the game argues very compellingly otherwise.

But the problem is that you need the cut content to properly appreciate the degree to which Kreia is in fact a fraud, a liar, and a bitter loser. The final planet has so much cut from it in the release version that it’s basically not worth playing. You don’t even get the final showdown between all your droids in the base game! It’s nonsense! The reasons it was allowed to ship are real familiar to anyone who paid attention to contract and license game dev in the 2000s; things didn’t get pushed like they did nowadays. They got shipped.

The Switch version of KOTOR II will apparently patch the cut content into the product sometime in the back half of this year (“Q3” is the claim last anyone heard) but it’s uncertain anyone will still be willing to give this title a chance by then, which is a shame. The Switch port of KOTOR II had a brutal game-breaking bug that hardlocked anyone trying to play it some eight hours into the product, and even the patch required a full restart of the game. Once you’ve patched your game so it works, you’ll still be out of luck when they add in the cut content, since that will require you to restart your file as well.

There’s a whole lot of great stuff in this game — many meditations on the Force, an incredible cast of characters, a much more coherent Star Wars galaxy than anyone but late-era LucasArts cartoons like Clone Wars and Star Wars: Rebels handed fans (it blows any of Disney’s additions to the franchise out of the water) — but you’re going to have a lot of trouble accessing it on the Switch version of the game. However, I do have to admit that there’s one basic fact in the Switch port’s favor that negates most of the very legitimate critiques I have of it: the Nintendo Switch is portable, and I can play KOTOR II in bed, on the bus, on the train, or in a hammock out back if I so choose.

It’s actually kind of unfair how much of a point in the port’s favor that is. Yeah, they didn’t update the graphics at all and every single bad texture is blown up to all hell when the Switch is docked and the game’s up on my television screen, but when it’s in handheld everything looks perfectly fine. It never needed to be a keyboard and mouse game; the joycons are quite able to handle the title’s real time plus pause combat. I can play for ten minutes and then put it away instead of having to keep it up on my second monitor.

The response to that, of course, is that you could just buy a Steam Deck instead, and suddenly you’d be able to play the game the way it’s meant to be played: through the PC installation, using mods on Steam Workshop to get the game up to snuff with better textures and better user experiences in addition to all that cut content that Aspyr says is coming but hasn’t given a great roadmap for on the Switch.

And then there’s the news that Aspyr had to stop work on their total remake of the first Knights of the Old Republic game because they’ve lost key personnel at the top of the project and have no idea how to proceed from here. Frankly there’s just not a good vibe here that these projects are being handled with any kind of seriousness — which makes sense, because the dirty little not-so-secret about Aspyr is that they’re a company that has spent almost two decades doing nothing but porting Windows games to MacOS, and increasingly recently, Linux and Switch. They had no track record to support giving them a full remake of a full title, and if the KOTOR II mess is the quality of port they usually put out, no one should be giving them Switch port contracts either.

Knights of the Old Republic II: The Sith Lords is a great game. You can play it like this. You don’t have to.

It’s $15 on the Switch store and $10 on Steam. On Steam, you can mod it for free into a much better user experience than you can play on Switch right now. On Steam, it’s a 3.5 GB installation instead of the monstrous 15 GB it takes up on your Switch. I can’t hazard a guess why a game that looks no better than it did at release has this file size, except to point out that if you ran a Windows virtual machine that could play the 2004 release KOTOR II from its installed directory and executables on some other file structure, its barebones footprint would probably come out to around 12 GB. Either way, unless you’ve bought an expansion SD card for your Switch, this thing is going to muscle out any other AAA tier install.

Do not buy this game for the Nintendo Switch. If you haven’t played it, buy it for your PC on Steam right now.

The original version of this article described the HK-51 droid from the Peragus Mining Facility prologue as “HK-47,” until we were corrected on Twitter by a massive nerd. We regret the error.