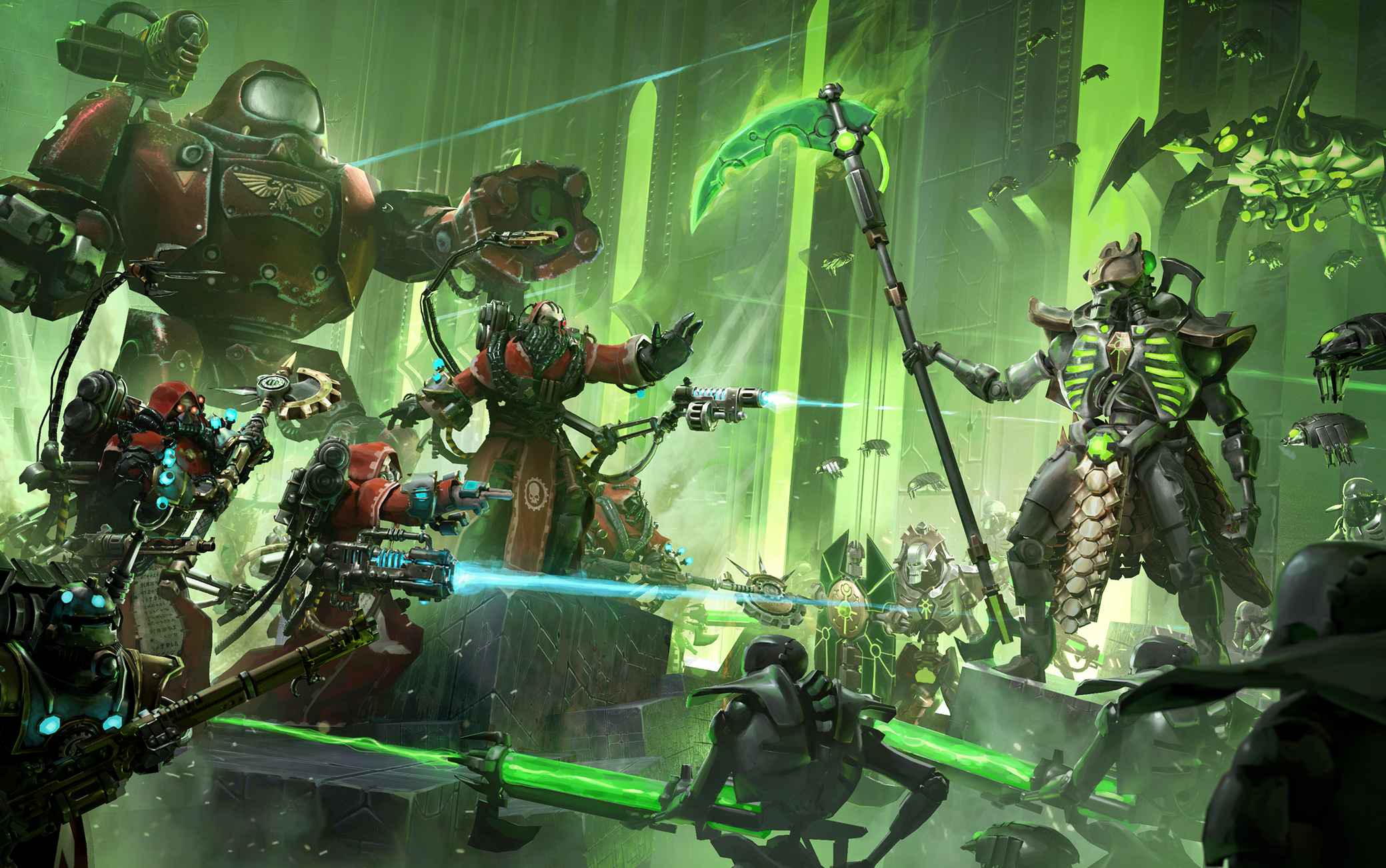 Many developers have attempted to capture the grim darkness of the 41st Millennium (and the high fantasy of the Old World) in video game form. Every Tuesday, Jonathan “Crion” Bernhardt will be diving into the games that use the Warhammer license and talking about what works, what doesn’t, and which ones are worth your time.

N.B. the day after we posted this, the Heretek expansion was announced. Check it out here.

Our survey of the Warhammer 40K video game library brings us to a much more enjoyable title this week: 2018’s Warhammer 40K: Mechanicus from Bulwark Studios, one of the quiet stars of a catalog dominated by larger, more bombastic titles like the Battlefleet Gothic games and, over in Warhammer Fantasy, the ever-growing mesh ofTotal War: Warhammer base games and expansions.

There haven’t been all that many turn-based Warhammer titles in the new wave of video games, which doesn’t make much sense given that the base tabletop game is turn-based until you think about it from Games Workshop’s perspective: given the expense involved in creating a tabletop army of miniatures to battle, under no circumstances do they want to put out a product that allows players to get the same experience on a virtual battlefield. The rosy-cheeked spin on this is that the company is protecting the investments made by those who have already bought into the tabletop game; a harder-eyed view is the necessary consequence of that protection: that they can continue to keep prices high on a product that only they supply. Either way, it is unlikely that any Warhammer or Warhammer 40K title will be coming out with the same sort of fidelity to the tabletop system that the recently-released Battletech has, whether in the immediate future or, possibly, ever.

Warhammer 40K: Mechanicus is a turn-based game, but it naturally bears little resemblance to the tabletop product. Instead it draws much more heavily from the lineage of games like the Firaxis XCOM titles and the budget titles that spun off from that, like Phantom Doctrine and to a lesser extent Mutant Year Zero. While Mechanicus has the bread-and-butter hallmark of any XCOM-like — an isometric grid-based system of movement and action with cooldown or ability-point based powers —  it doesn’t technically have a cover system, though blocking line of sight behind a wall does, of course, protect your unit from being shot through it. Combined with the fact that there are no to-hit percentages in the game — if an attack ability is within range and has a proper path to the enemy, it will hit, with all the randomization being calculated within the damage roll — this makes Mechanicus a game far more about managing attrition than it is about not getting hit in the first place, which is a big hallmark of high level play in XCOM: Enemy Unknown and XCOM 2.

That makes sense given the plot of the game, which pits the immortal, implacable Necrons, one of the strongest factions in the 40k lore (if not always on the tabletop), against the Adeptus Mechanicus (or “Ad Mech”). One is a faction of the Imperium of Man which, until an army release in the 7th edition of the game, was usually relegated to providing a few units in a support role for other, more popular armies, such as the Space Marines or Imperial Guard; the other is a vast army of murder-machines entombed on dead worlds across the galaxy, who are now waking up to find their cairns and crypts have been invaded by a race of creatures who were little more than particularly bright rodents when they originally went dormant.

In the video game world the Adeptus Mechanicus was last seen in the Dawn of War series, where Ad Mech servitors acted as the basic building unit for the Space Marines and the Guard, and while the Guard could call upon the services of one of their Techpriests as a commander, the Adeptus Mechanicus were hardly foregrounded as worthy of standing on their own — the Imperial Inquisition would eventually get their own army in the Dawn of War 2 expansions, but the Mechanicum remained in a purely support role.

So it’s quite appropriate that the enemy is going to hit you, is going to hurt you, and given that they’re both technologically superior and have numbers on their side since it’s their home turf, is going to overrun and kill you. The game foregrounds this: your Adeptus Mechanicus team is foraying into a progression of Necron tombs, and over the course of each dungeon delve, your team raises the local alert level, whether through random room interactions of the sort that you’d find in any dungeon-crawler — you’ll happen across a Mechanicus scout who has been badly wounded, for instance, and have to choose whether to leave him, bandage him up, or put him to death just to make sure he’s not infected with any xenos computer plague, with each option giving you a variable reward and/or alerting the Necrons nearby — or through prolonged battles at the midpoint or end of the tomb. Then, once you’ve completed the tomb, that alert level is tallied up and deposited into a campaign-wide alert bar, and once that bar maxes out, it’s game over, one way or another — all the Necrons on the planet will awaken. Different difficultly levels can make this more or less onerous, but there’s no way to just turn it off; it’s a major game conceit that the Adeptus Mechanicus are working on borrowed time.

If there are criticisms to make of the game, they’re somewhat related to this; the game’s plot and presentation do feel a bit threadbare at times. The character writing is good, if broad; you’re the aloof and bombastic head of your expedition, and your advisers all embody recognizable tropes: the scientist who is perhaps a bit too fascinated with Necron robotics and cybernetics who urges unrestrained study; the commissar who repeatedly intones the party line about killing the xenos and burning their works; the troop commander whose sympathies and priorities all align with keeping her men safe and whose supposed softheartedness is the only thing the scientist and commissar can agree is dangerous to the mission. Each mission you perform is tasked to you by an individual adviser, and you’ll generally learn more about them over its course, but while the content is well-written, there’s not much narrative space in a tactical dungeon-diver where none of the units are named characters in the story for the writer to stretch his legs. There is a silver lining to the limitations the game puts on the narrative, however — unlike in other recent 40K productions (like, say, next week’s game), the Necrons are permitted to remain silent, terrifyingly alien Terminator robots with unspeakable amorality, instead of… yet another group of self-aggrandizing space conquerors voiced by the same circuit of voice actors from the United Kingdom being asked to ham it up as broadly as possible.

Some players might find the game visually underwhelming as well; when in a tomb, the game either presents as a barebones mini-map-style layout tinted Necron green when you’re moving between rooms, or a stylized, Mechanicus blue-wireframed presentation on the tactical or battle map. When not controlling your units in a battle you can see all the units and scenery on the field with their proper meshes and textures, but they still all look fairly basic (and just from an aesthetic perspective, by the fifth or sixth Necron tomb, everything’s going to start looking the same, because by design it is).

In the end neither of these issues were a huge problem for me; Mechanicus is a $30 base game with a $7 upgrade to the full post-release content edition, and that feels about right for a game that has a distinct visual hook but not a lot of deep polygon, particle or mesh visual polish, and which does only one or two kinds of gameplay but does them incredibly well. It might technically have less replayability than last week’s Inquisitor because there doesn’t seem to be much procedural generation in the campaign mode, but procedural generation is a bit overrated when it comes to how much it truly extends a game’s lifecycle, in my opinion.

Final Verdict: Warhammer 40K: Mechanicus is well worth the purchase both at its recommended retail price point and just in general for fans of turn-based tactical combat — especially those who want to see a more creative matchup than Space Marines versus Chaos, part one-hundred thirty.

Next week, as alluded to above, we take a look at Battlefleet Gothic Armada 2, assuming I can get it to run on my computer again.