Even with the new launch of Tabletop Battles, we’ve still been hard at work on Administratum. This week we’re proud to announce the release of The Teams Update, which introduces a host of new features we’ve been asked about for some time now. If you wanted to run a campaign with player factions/alliances/teams, this is the update you’ve been waiting for! 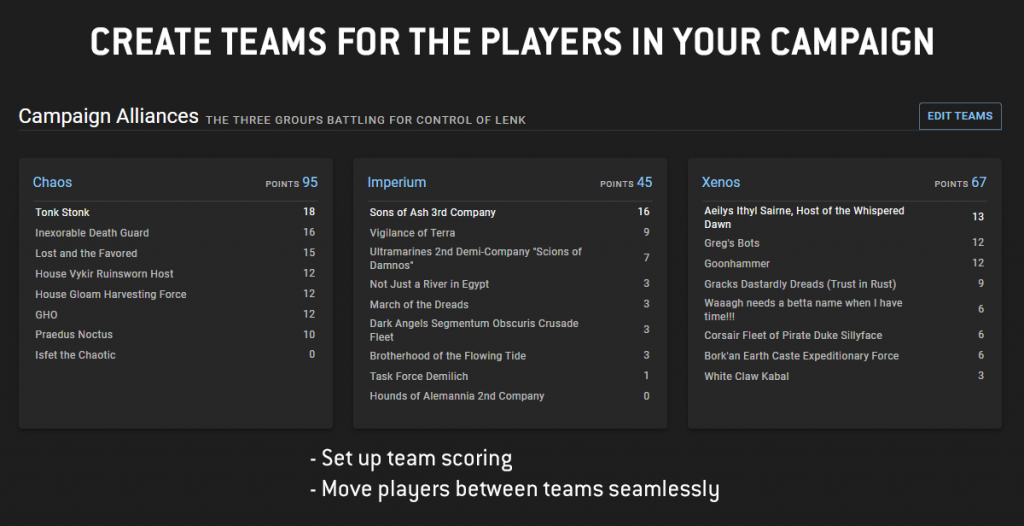 This is one of the biggest updates we’ve ever had – Patrons at the Warhound Tier ($10/month) and higher will now be able to add player teams to the campaigns they create. This allows you to organize their players into alliances, factions, teams, location-based groups – you name it. If you’ve wanted to implement some of the campaigns from the 9th edition War Zone Campaign books and track scoring, now we’ve got you covered.

Campaigns come to life when you work together with a team. Toil and struggle to earn enough points for your teams to stand victorious at the end of a campaign, and relish the victory all the more knowing you contributed the lion’s share of your team’s points. This update brings with it all the tools you need to add Teams to your campaign, with full narrative and scoring rule customization. 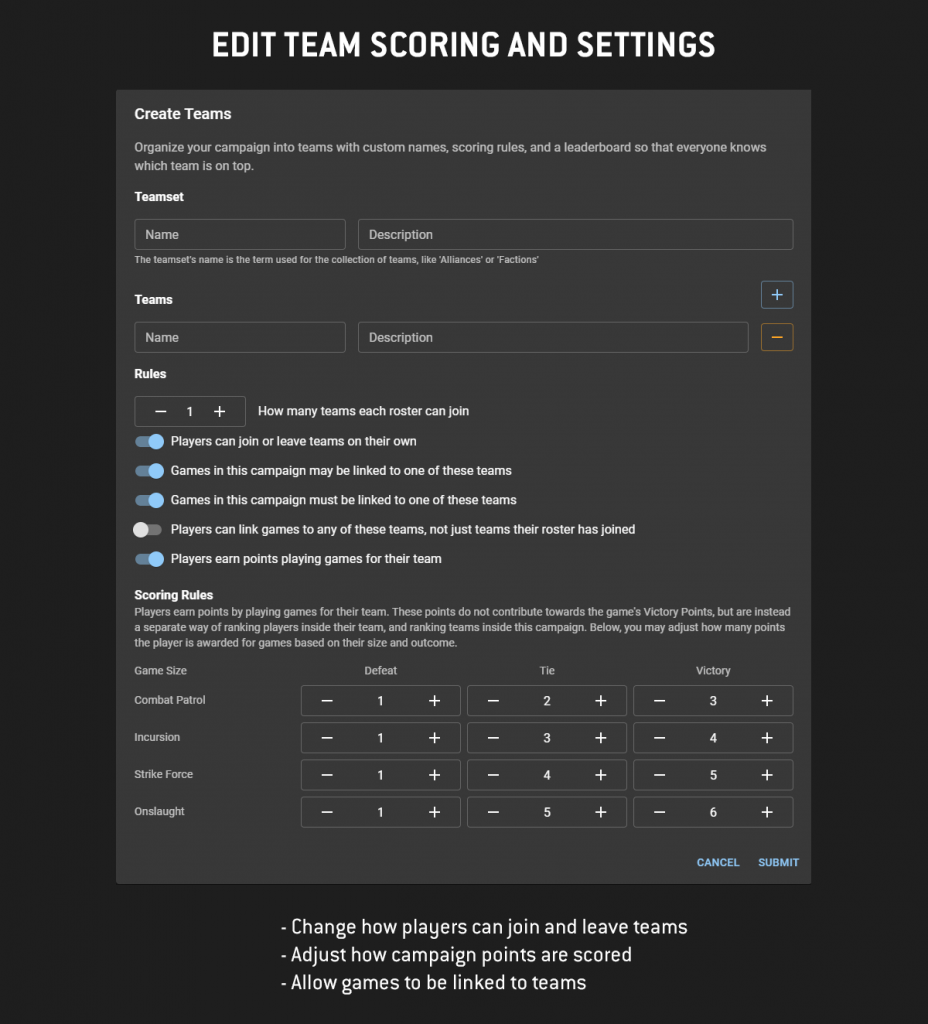 As a campaign owner, you can create Teamsets – or a “collection of teams” – name them, and then add as many individual teams to them as you want. Want to set up player groups based on day of week availability? Create a teamset for days of week and make them non-scoring, then sort players into them to make for easy scheduling. Want to do superfactions and subfactions in your campaign? Create a teamset for both, then sort players into each as needed. Want to let players join or leave teams on their own? You can do that too, allowing players to act all all sorts of intrigue, skullduggery and backstabs. You can give them even more freedom bay allowing them to choose which team to allocate their wins to on a game-by-game basis!

Want a zero-sum campaign, where you are rewarded for a victory the same amount your are punished for a defeat? Easy, just change the scoring rules. Want escalating scoring, where bigger games are worth more? It’s right there at your fingertips! And that’s not all, the rules for how players can join campaigns are also under your control.

Set up the rules on how you want teams to run. Want them to be strictly controlled? Set it so that each roster can only join a single team, and players can’t leave it unless they go through you first. One team not enough? Let players join two, or three, or however many you want to set the limit on. Want a more free-flowing campaign? Let players link their games to any team, not just ones that they have joined.

Teams are as versatile as you want them to be. Use them to group players together in any way you can think of. Weekday availability, digital vs in-person players, in-universe army location. All these are available right now with your Warhound Patreon membership.

A while back we revealed the new Games tab on the Roster page. After quite a few iterations, we’ve rolled it out to the entire site! All the great features like table/widget view, pagination, sorting, and searching are available on the Campaign, Roster, and Unit pages. Each location also shows a bit of tailored information for that specific page.

You may have noticed some slowdown when using Administratum last month. That’s what happens when we let Gregbot requisition hardware, as he tends to requisition parts that “fell of the back of a truck”, if you catch our drift. We’ve done some significant hardware and site-wide optimizations, and Administratum should load faster than ever before!

UI, Breadcrumbs, and Everything Else

We’ve gone through every page on the site, and cleaned up a lot of the pages to give them a more consistent look and feel. We’ve also taken a critical look at the Breadcrumb system, where you have navigation links at the top of the page, and improved it to more accurately reflect the page you just left. For example, clicking on a Roster from a Campaign now leaves breadcrumbs that lead right back to that campaign!

All of this and more, as the Team Up Update is one of the largest we’ve ever done. For full details, check out these Patch Notes.

Thanks again to everyone supporting us on our Patrons as you’re the reason we’re able to keep building awesome things. And also thanks for putting up with slow performance recently. It’s been a thorn in my side, and I couldn’t be happier that the site is now screaming fast!