4.1: I Have Been Judged and Found Wanting.

Current games status: I ran a pared-down version of my NoVA list (so no jets or Azrael, but most of the same character auras and units, etc) in the Astradus Campaign, and it got ignominiously tabled twice. Cool.

Current painting status: Better than that, at least. Hellbois are done, Incestos are done, Apothecary is done, Inceptors are done. The Darkshroud is still waiting for me, and I’m starting to realize I can’t keep hiding from it.

For the painting, I figured I’d give Contast [sic] a shot for the guns and armor on my remaining power armor bois. I just used a can of Corax White instead of the correct primer, because Grey Seer was sold out, and fuckin’ 19 dollars? You gotta be kidding me.

The main knock against Contrast seems to be that it allows sub-par painters to cheat their way into a nice-looking army without learning the skills. Which, I mean, yes. Obviously it does that, why the fuck do you think I bought it? That kicks ass. 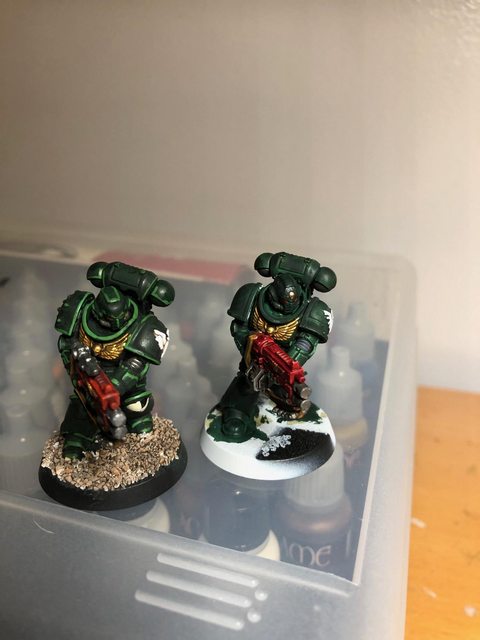 Normal on the left, Contrast on the right.

I’m not going to try and compete with Coda’s excellent Which Green is the Dark Angels-est post, but here’s how my normal and Contrast recipes compare. “VGC” means “Vallejo Game Color”, and everything else is Citadel.

So, fewer steps, and quite a bit faster this way. Ten intercessors took a total of maybe 4 hours, which is less time than I’d spend doing five in the Before Time. Admittedly, I didn’t do any kind of highlights on these ones, because I don’t care, but still. 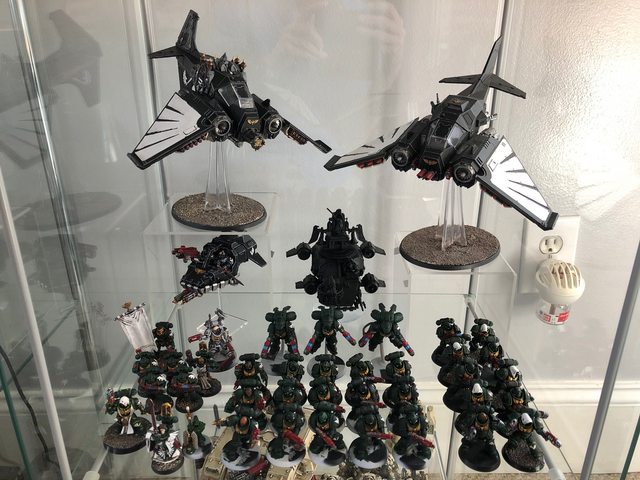 The army as it stands now (click for big)

Another thing I’ve been doing is making sure all my models have company markings on the kneepads – I went with 5th Company, since it’s an easy quartered bone/black design, which seemed appropriate since it’s baby’s first freehanding (and it is barely freehanding). They aren’t getting squad markings on the pauldrons, because that is too hard.

Clearly, finish painting, and try to lose some practice games.

I’ve been holding off on basing anything, since those are easiest to do in one big batch at the very end, but that bag of sand is starting to make Fuck Me Eyes at the models, so that should be done by the next installment.

SRM’s buck-wild Road to NoVA update reminded me that I need a display/transport solution, so I guess I’m thinking about that now. So that’s cool, I didn’t have enough problems already.