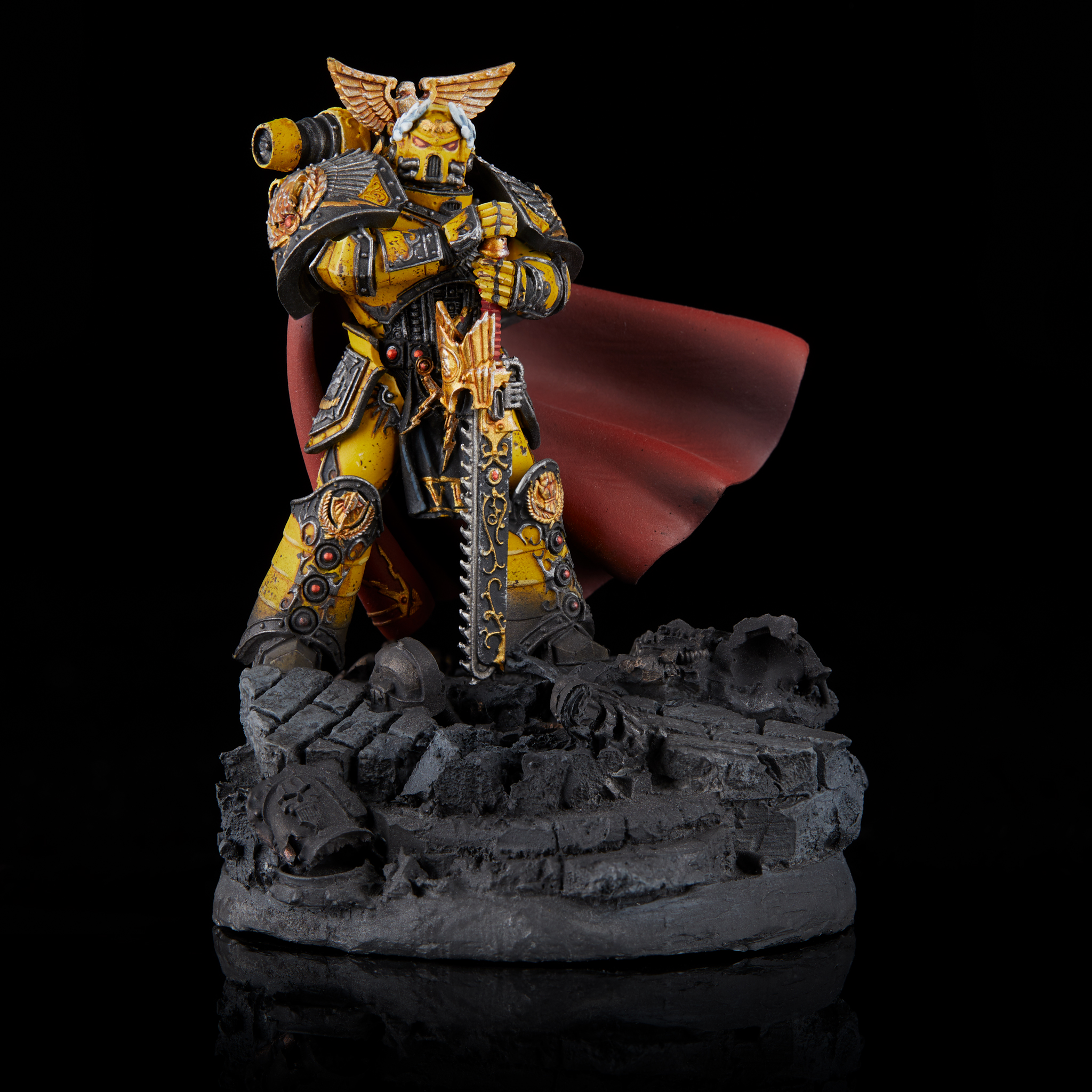 Finishing your own army is core to the Warhammer 40,000 hobby. In our Army Showcase series, Goonhammer contributors take a look at the armies we’ve been collecting for years, and the new ones we’ve just finished – what drew us to them, why we keep building and painting, and how they play on the table. This week, Jack “BenBooley” Hunter is talking about his exquisitely-painted Imperial Fists.

I started my Imperial Fists early last year when I was getting a little burned out on painting Blood Angels. I was dissatisfied with my scheme, and wanting to give 30k (Horus Heresy) a try. I’m a big fan of bright colored armies, and wanted an army that plays substantially differently from my Blood Angels while still having the fluff freedom to give me options in my army building. And I’m just incapable of playing traitors. As a bonus, nobody else locally was playing Imperial Fists, so my army would really stand out.

As I started reading the Fists’ 30k fluff, there were a couple key points that I gravitated towards and wanted to build my initial army around. First, the Imperial Fists have a lot of terminator armor, which gets storm shields and access to teleporters. Second, they do a lot of close quarters fighting, particularly boarding actions. With those two points in mind, I built my initial army of a few Cataphractii squads and a box Dread.

Yellow turned out to be both exceptionally fun to paint, and also incredibly painful. I’d come up with a scheme that gave me a great rich yellow, but also relied on a paint that was hateful to airbrush. This would’ve been a really great time to change it up before I got too far in, but sadly that would’ve taken more foresight than I had. This was the first time I’d worked with oil washes and heavy weathering, and both have turned into something I’ve carried through all my future projects.

Over the rest of the year, I kept building off that initial force, trying to keep in mind my fluff of an elite force mostly designed around Zone Mortalis fights. I did end up having to put in some Tactical Marines, but I also expanded out with 4 more regular Dreads, some Centurions, and Leviathans. I also stuck in one of my favorite models that’s sadly since disappeared from the FW website – a Caestus Assault Ram. There’s something about an airplane with a giant melta cannon on it that rams things to disgorge a cargo of Terminators that I just love.

As FW has a truly excellent Rogal Dorn model I had to pick him up for the army, though I couldn’t stand the official armor color. Solid gold armor belongs on someone ostentatious like Sanguinius, not on Dorn. I also wasn’t a fan of him being bare headed, but I’d seen a conversion by Angaroth that fixed it up, so I picked up the Guilliman head. I also wanted to rebase him to better match with my army, and give me the option of running him in 40k if I ever needed to. I did the armor up in yellow with the same dark metal trim as the rest of my army, and even now almost a year later he’s one of my favorite models in the army.

Over the last year my Imperial Fists army has moved from just being my 30k side project into my main army. I end up playing about 50/50 30k vs 40k, and didn’t want to be swapping back and forth so much between what army I was working on, so I painted up a set of Intercessors and Primaris characters that I could use with my 30k Dreads and elites to give me a competitive 40k army.

GW also released the Siegebreaker Cohort Specialist Detachment with Vigilus Defiant, so I painted up 6 centurions and 2 laser Vindicators for that. This is one of my favorite ways to work up a big collection. Rather than list out all the units I could ever want to use and start working my way through painting them, I’ll put together smaller cohesive groups that I can then slot together during army building and come up with an interesting result. Some of the groups I’ve done for this army have been the Terminators I started out with, my Primaris infantry, and now the Vigilus Siegebreakers.

Most recently (I actually finished the second one just yesterday), I’ve been working on a pair of the new Repulsor Executioners. As much as I whine and moan about needing to build Repulsors – these were the 4th and 5th I’ve done, and the mold lines on the grav plates and gaps in the hull still suck – these were actually a lot of fun to build and paint. Moving the two mini-turrets over the doors onto the new larger turret makes a huge difference to the model’s silhouette.

I’m actually not sure that I’ve ever won a 30k game with my Fists. That’s unfortunate, as they were supposed to be my 30k army, but them’s the breaks. Turns out that an army of mostly Terminators isn’t really all that good. In 40k however I’ve had a surprising amount of luck with them. Running an army based around Dreads is great, as it means all my firepower is getting my Chapter Tactics. Ignoring cover turns out to be surprisingly good, as it denies my opponent the ability to use the Prepared Positions stratagem on turn 1 or to try to hide in cover against me. I ended up painting the standard “Loyal 32,” though with my own twist by giving the Company Commanders power fists.

The 1500-point army pictured below ended up taking 2nd and 3rd place at a few smaller local tournaments (running GW missions, not ITC), and I was able to win the majority of the casual games I’d play with it. The army is easy to execute with, as there are no tricky stratagems to use or any movement shenanigans. Just stand there with your bright yellow death ball and kill anything that comes close, while your Intercessors go out and capture objectives or screen off hostile melee attackers. I did try one ITC event with my Centurion stack – it did not go well.

I have another large ITC tournament coming up this weekend. At 100 people and 2 days of games it’s going to be the biggest event I’ve ever attended. I’m excited to get a chance to field my brand new Repulsors, even if they just took a 31-point price hike each that forced me to rework a chunk of my army. I’m also getting to slot in one of my favorite non-Fist models with my candycoat red Knight. I’m hopeful that I can end up going about 3-3 or maybe even 4-2, but I’m really shooting for a Best Painted award more than anything else.

My Astradus campaign warmaster, Captain Jago Lytanus, has yet to figure out where the Astradus system actually is, but he’s sure trying to get there. He’s a conversion of Primarneus Calgar, and really stands out on the table.

My Primaris Ancient and Apothecary are another two of my newest Fist characters, both made with some tweaks rather than just the stock sculpts. I’ve tried to do that wherever I can to help keep my army unique.

This old metal sergeant was one of my favorite models from the old sternguard box, and as soon as primaris sergeants were allowed to take power fists I knew I had to replicate him.

This Praetor was the very first character I painted for this army. While I don’t think he’s as good as some of my more recent ones, he still holds a special place in my heart.

These two captains round out my collection of Primaris hit rerolls, and look cool doing it. In a perfect world I could combine them into one guy with a bolt rifle and a power fist, but it seems like we’re moving away from that in 8th.

These are the newest models in this army, and I think easily my best painted tanks. Pushing a lot of black into the scheme, especially on the second one, helps me avoid them being a big blob of yellow. They’re also a test for my new yellow recipe. After taking some time off to paint Blood Angels, and having GW discontinue Lamenters Yellow with the Contrast release, I decided it was time to stop struggling through my basecoats and change it up. It ended up a brighter color than before, but also has more depth to the shading.

While painting my Fists has mostly stalled out at the moment in favor of my Blood Angels, I’ve still got a few things I definitely want to paint – and there are certainly some new model releases coming up (or at least new Primaris Lieutenants, from what I’m seeing on Twitter).

Top of the list is an Astraeus. I painted for my Blood Angels and I love it. The appearance of it really fits the look of all the new releases, it’s an excellent centerpiece model, and I’ve been having great luck lately running my BA one. Supporting it with more shooting rather than an assault army should make it even better, I think.

The second thing to do is paint a set of 3 Redemptors. I love Dreads, but having to rely on the FW ones can be a bit problematic. As they’re one of the strongest units in the Marine army, and also don’t feature in either the Codex or on the GW website, a lot of newer opponents don’t know about them. I want to be able to take this army against someone new without them feeling that they lost the game due to pay-to-win cheese. The Leviathans will still be coming out against any veteran opponents, though.

The third thing I eventually want to do is just more Tacticals. I really want this army to be good in 30k, and unfortunately I think being able to spam infantry is going to be a part of that. I’m not a great fan of painting them, but it can’t be fun models all the time.