Big & Thicc – The Lore of Battletome: Sons of Behemat 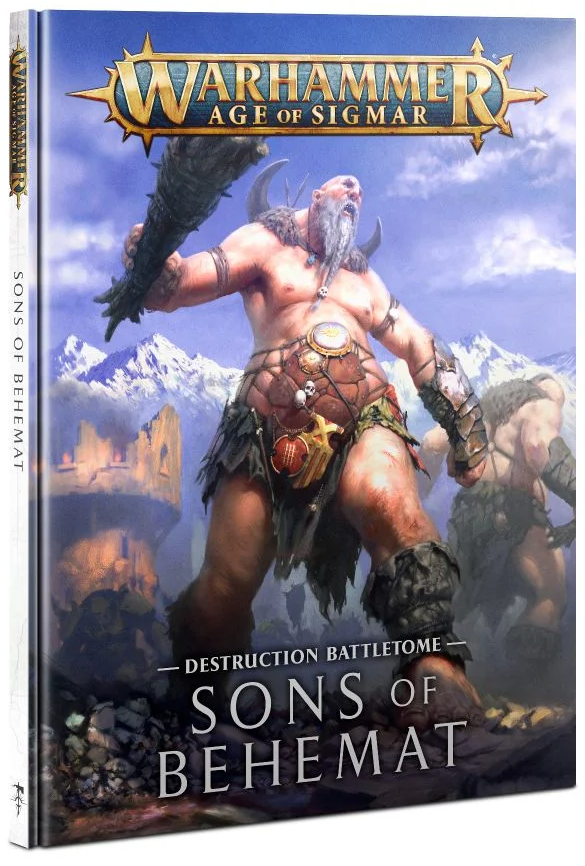 The armies and factions of Age of Sigmar are all brutal and impressive in their own ways (though we all know the Gitz is best). As new books release, we dive into the lore presented in each, and how it shapes the fictional universe we love and make war in. In today’s review, Raf Cordero is diving into the lore presented in the new Battletome: Sons of Behemat and how it presents one of the game’s biggest factions.

Birth of the Big Boy

There are few things in the Mortal Realms more terrifying than a Mega-Gargant stomping on the horizon. One of those is a Mega-Gargant stomping on the horizon towards you. While the God Beasts may be larger, the Mega-Gargants are among the biggest and creatures you’ll ever see (probably only once). These creatures are interested in only a few things: battle, eating, battle, drinking ale or liquor, battling, and in their downtime finding a good battle.

Gargants are at once ancient and a modern emerging race. Their Grandgargant, Ymnog, was one of the original zodiacal godbeasts. The gargants believe that it was Ymnog who created the land, sea, and sky by shattering reality with his club in a fit of anger. As is common with Gargants, when their ire raises so does their hunger; following Ymnog’s world creating tantrum he drank half the ocean and snacked on all the comets in the sky. As he slept Behemat and his siblings grew from the rocks in Ymnog’s belly.

Gargants are not the kind to sit still, and Behemat was no exception. While Ymnog slumbered, Behemat brewed a giant lake of moonshine in Ymnog’s gut. The visual of the future World Titan attending to a still pouring ‘shine into fuming lake is one of my favorite little bits of lore in the universe. Even the grandfather of gargants can only hold so much liquor and eventually he retched his children into his mouth. They began brawling, of course, and in their revelry they spilled more moonshine and Ymnog swalled them back down. Behemat remained and was forced to smash his way through Ymnog’s teeth. The Gargants believe this is how the first mountains were made.

Now freed, Behemat eventually developed a close bond with Gorkamorka and the two became fast friends. Behemat, not quite so cunning as the greenskin, served a bit like Gorkamorka’s right-hand man. The two gallivanted through the realms smashing and bashing anything that crossed their path. If anyone from the Games Workshop animation team is reading this, “The Greenskin and the Gargant” would make an amazing buddy-cop style TV show.

Unfortunately, the good times would eventually come to an end. The gods of Chaos whispered in Gorkamorka’s ear, making him grow jealous that while he did Sigmar’s bidding Behemat was free to smash for himself. Not even Gorkamorka was immune to the influence of Chaos. He eventually grew to resent his right-hand man and concocted a plan. From then on every time the two met he would issue a challenge to Behemat: duplicate one of Gorkamorka’s own infamous feats of might or die trying.

Being a gargant, Behamant embraced the challenge. The first was to create a flood so great that it destroyed a city. This Behamat accomplished when he tripped over a fjord and the tsunami drowned an Aelvan city. Some challenges Behemat managed to complete on purpose. A favorite of mine is the time he stood on a mountain and hurled insults at Dracothion until the great drake hurled meteors at him. After taking a couple on the chin, he wound up with his club and knocked one right back at the celestial dragon. The impact showered the realms in scales, creating the Sauron race (according to Gargants anyway).

Gorkamorka’s final challenge was the one that would ultimately spell Behemat’s doom. He was to challenge Sigmar himself to a battle. The World Titan held his own but was eventually laid low by a blow from Ghal Maraz. The impact knocked him unconscious for generations. Embedded in Ghyran’s crust, Behemat slumbered and slumbered. Mountains moved around him, civilizations rose and fell, and eventually Chaos rose.

Recognizing the power in the titan, Archaeon set his sites on turning Behemat to chaos. Nurgle’s potent diseases ravaged Behemat, though his skin was so thick and his constitution so strong that he did not fall completely ill. The second part of the plan involved Skaven drilling into the nerve centers of Behemats ancient body. The Hammers of Sigmar fought desperately to prevent this, but the ratmen managed to succeed and awaken Behemat. Despite resisting the bulk of the diseases, the Titans pain was ran so strong and so deep that he could do nothing but rampage.larielle passed a death sentence on the titan before retreating. The Celestant-Prime bore Ghal Maraz again and struck the Titan down with Great Bolts of lightning. He fell, laying in the Scabrous Spral to decay.

Rise of the Gargants

In the wake of Behemats death, strange occurrences have been noted in his offspring. Gargants are growing larger and stronger than ever before; some are worried that this is a natural reaction to the void left behind by the death of Behemat. They say that eventually another Gargant will rise to Behemats power and step into his prodigious shoes. Metaphorically speaking, if they bother at all gargants tend to wear sandals.

It isn’t just the Mega-Gargants who are effected. Their genesis has sent ripples through gargant culture. Aleguzzlers who come into contact with Mega-Gargants tend to follow in line behind the power leaders. Due to a desire to impress the Mega-Gargant—and the Mega-Gargants taking the bulk of the drink for themselves—Aleguzzlers in close proxiity to the giant beasts tend to have a moment of clarity, sober up, and become more effective fighters. These are known as the Mancrusher Gargants.

While the more educated races refer to groups of Gargants as a “catastrophe”, the term the gargants use for themselves is “a stomp”. Helps that its easier to say. A Gargant Stomp is organized with the biggest and strongest in charge. He or she is known as the “Big Heel”, with lesser Megas “Under the Heel”. Footsloggas fall in line below him, all waiting their turn to challenge a stronger gargant for a chance at power.

Generally, Gargants roam the realms in search of food and fights. As they grow smarter, they’ve come to learn the value of lending their services as mercenaries. The first learned this from Ogors, though by now the tactics have spread through Gargant society. As they say, squash a warband and you’ll eat for a day. Sell your services to a warband instead, and you can eat every day. Until you grow board and eat the warband anyway.

While this battletome may be light on datsheets, its full of character and whimsy. The gargants are honestly hilarious creatures. They refer to the War Against Chaos as the “Sole Wars” because they learned how much it hurt to stomp on spikey chaos marauders; it’s also when they learned to wear sandals. Many of Behamat’s exploits have turned into Gargant myths and legends. Its said that his flooding of the Aelven city is why some elves live under the water, and the reason that dead men in shysh have no meat on their bones is because of the time Behemat was so hungry he ate a bunch of people and followed their souls into Shysh so he could eat them again. There are sections that go into deeper detail around the specific units you can field, but this book is best when its telling tales.

There are, of course, stories of horrific violence and destruction wrought by the beefy hands of these thicc boys but the presentation is classic Warhammer at its best. Like the Orks of 40,000, the Sons of Behemat are out here standing in their truth and living their bliss. Now if you’ll excuse me, I’m going to go figure out how to translate “Stomp, Smash, Shout” into Duardin runes so I can give my model a lower back tattoo.