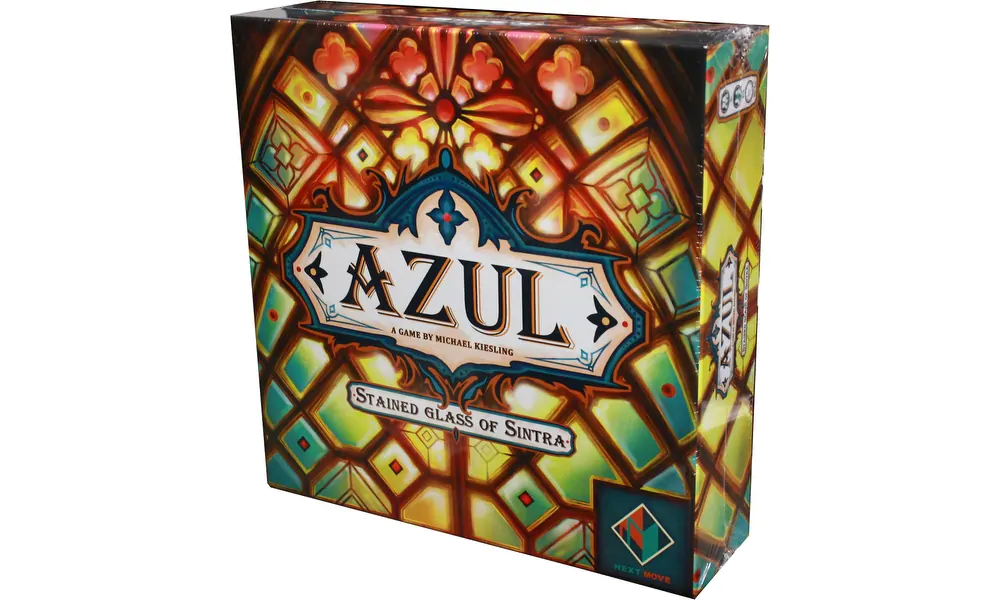 A few weeks ago I read Raf Cordero’s review of Azul here on Goonhammer and I thought to myself “hey that looks pretty cool, I should pick that game up. Raf always recommends good games.” [Editor’s note: That’s how it’s done, folks] Plus, Azul looked like it could be the rare fourth type of game, i.e. “games that I can play that my mom will also play.” So, on my way out of the local game store, I picked up a copy of Azul.

…or at least I thought I did. Turns out, I bought a copy of Azul: Stained Glass of Sintra instead, a spinoff/variant of Azul. There was absolutely no way I was going to return the thing and admit I had just not bothered to read the title on the box, especially when keeping it meant I’d have something to write about on Goonhammer, so here we are – welcome to Sintra. Your work on the royal palace of Evora is complete and now you and one to three other players (2-4 total) have been asked to adorn the windows of the chapel of the Palace of Sintra in Portugal. 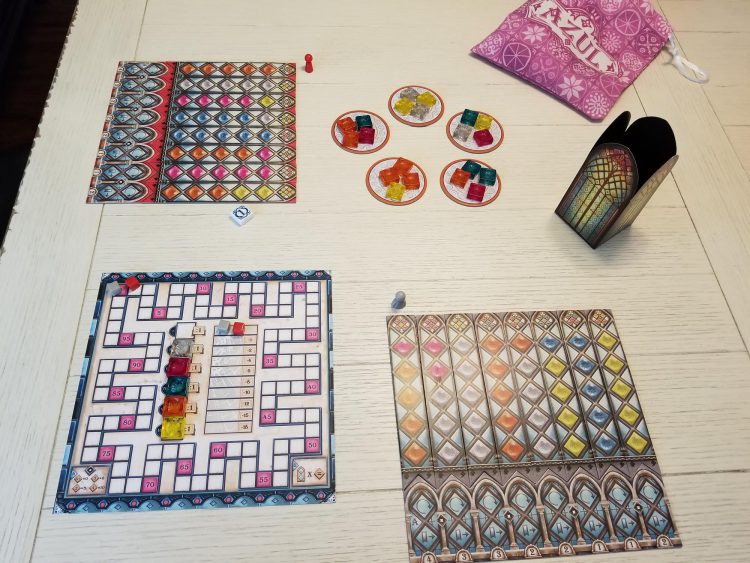 Play progresses in a very similar fashion to how I imagine play in Azul progresses; at the very least, parts of it look very similar and the tile mechanics are something Azul players will find very familiar. At the start of the game, players receive a game board with window designs and a series of circular factory tiles are placed in the middle of the table. Four randomly chosen stained glass tiles are placed on each. On your turn, you have two actions you can take:

To illustrate this process, I’ve copied Raf’s strategy of making a video of the action – here I’m taking a red tile from the Factory and pushing the rest into the center of the table. You always have to take all the tiles of the same color, whether they’re on a factory tile or in the middle. [Ed. This is identical to Azul]

If you take the tiles, you place as many of them as you can on a single window on your board (unused tiles break, costing you points at the end of the game), and move your glazier to that window. Position matters; you can only place tiles on any window to the right of your glazier. When you finish a window, you place a single tile from it on the lower portion of your board, then flip it over. The second time, you place another tile at the bottom, then remove the window entirely. Every time a window is finished (each one can be finished twice), you score points for it and every completed window to the right of it.

This creates an interesting dynamic where you want to complete (and score) as many windows as quickly as possible, but also complete windows on the right first since they’ll score you extra points every time you complete a window to their left. This is where the positioning mechanic creates some wonderful tension: Scoring windows on the right is worth more points over the course of the game, but those windows tend to be worth fewer points initially, and being unable to place tiles to your left means you’ll eventually have to give up one or more turns moving your glazier back to the leftmost window. 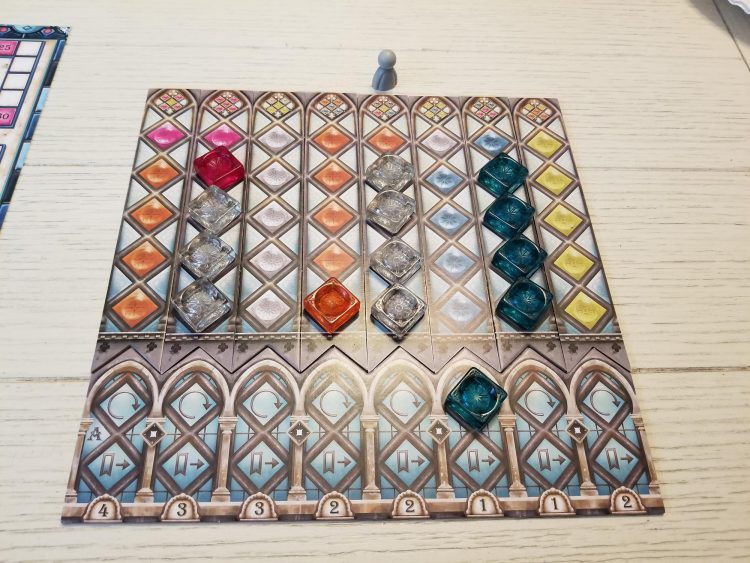 Players score points throughout the game as they complete windows. The game lasts for six rounds (a round ends when all of the tiles have been used), then players score additional points for the tiles left on their board and the full windows they’ve completed (you can score bonus points for completing windows next to each other), and lose points for any tiles a player “broke” during the game by taking more than they could use. The penalty for dropping a few unused tiles starts minor but doubles for each additional tile you break, creating some harsh penalties if you play it too fast and loose. This can also create incentives to force a player to take too many tiles of one color by pushing the color they need to the middle of the table. We played one four-player game where a player was forced to take 11 yellow tiles as the final move of a round, essentially eating a -15 point penalty at the end of the game.

My family picked up Stained Glass of Sintra over the course of a single game, and were able to very quickly start making strategic decisions about play and screwing each other over in fun ways in our second and third games. The game was abstract enough that my mom could join in and not roll her eyes/get bogged down by the minutiae of factions and backstories, simple enough that everyone could understand how to play and, more importantly, how to play well within a few minutes.

Azul: Stained Glass of Sintra is one of the best mistakes I’ve ever made. We had a blast playing it, and have played it several times since. It’s a fun and challenging game with a surprising amount of depth. With two players the game is a fun back-and-forth battle, and with four players it becomes a more hectic game of trying to plan ahead and pulling the rug out from under other players. I’d highly recommend it, but I’m not sure it’s different enough from Azul that it’s worth having both.

A word of caution, though: The stained glass tile pieces are lovely but they look just like candy. Keep the game away from children if at all possible.

Azul and Sintra seem to have a similar core mechanism; grab the colors you want and push the leftovers into the middle. This can force you to take more than you need which results in a penalty in both games. In the original, the primary tension comes from an ever-shrinking decision space; the more tiles you fill on the board the more restricted you are in later turns. As your options decrease, so does the potential to take negative points. Based on Rob’s review of Sintra, it seems like the tension comes from puzzling out how cram as many actions into 6 rounds as possible. Do you sacrifice actions early and hope to score big at the end? Or do you pack your turns with many small-point scoring actions and hope to block your friends from their end game play?

While the games are similar, what you’re looking for in a game can determine which of these similar games you pick up. Azul is about making the best of a situation that becomes tighter and tighter; Sintra is about puzzling out how to capitalize on the evolving situation and not burn too many turns.

Robert: I’d say that’s accurate. A big part of Stained Glass of Sintra is figuring out which windows you’ll be able to finish this round, which ones you can set up to finish next round, where you might get a bonus for tiles of a specific color, and how you’re going to manage the position of your glazier. Spend too many turns moving and you won’t score enough points. Push yourself too far the the right and your options become limited.