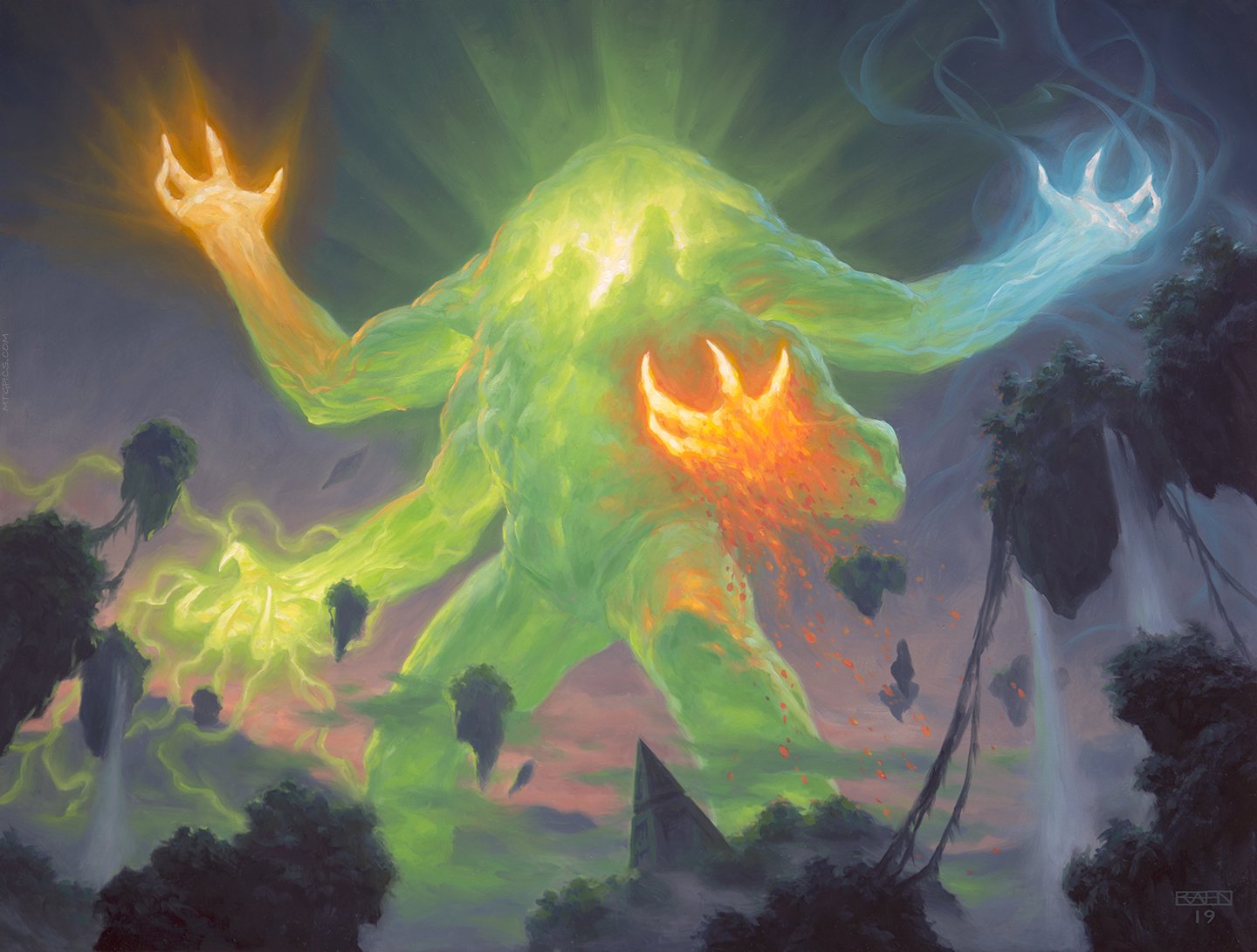 One of the more exciting cards to come out of Zendikar Rising for Commander players is probably Omnath, Locus of Creation. We might call this Omnath the IV, or Omnath’s fourth iteration. Hopefully, sometime soon we’ll see Omnath’s final form but for now there’s plenty to talk about and build around with this Omnath and it’s worth taking a walk down memory lane: 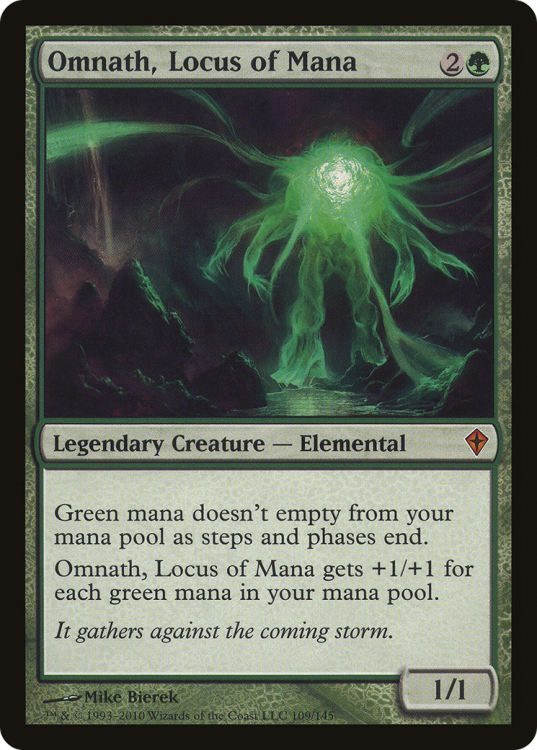 This is a pretty boring ability, it’s been part of the green color pie up until Zendikar Rising, when all of a sudden, red gets it too, for no explained reason. Still, if you built up a stock of Mana this Omnath I can hit fairly hard, and carrying mana from turn to turn can be quite useful, but it’s only green mana. 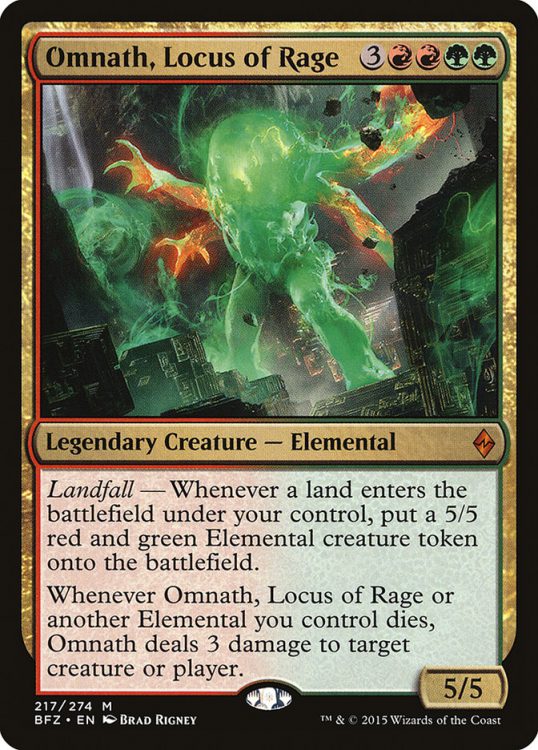 Landfall — Whenever a land enters the battlefield under your control, create a 5/5 red and green Elemental creature token.

Okay, all of a sudden Omnath has landfall.  I think, thematically, and Commander deck building wise it’s kind of sad that Omnath I doesn’t have some sort of landfall. “Whenever you play a land, add G to your mana pool” would’ve fit very very nicely with his theme and abilities and not been overpowered. Even so, Omnath II nets you a 5/5 token for every land.

This is pretty strong, but at 7 CMC, and 4 of it colored (3RRGG) it’s quite expensive. His second ability:

Whenever Omnath, Locus of Rage or another Elemental you control dies, Omnath deals 3 damage to any target.

Paired with his token generating ability this could be pretty devastating.  Pair this with something like Terror of the Peaks and some way of flinging or sacrificing creatures and you have enormous control potential, and could easily have a scenario where you combo off.  The problem, of course, is Omnath II is 7 CMC and Terror of the Peaks is 5 CMC, and in EDH that just doesn’t cut it.

Omnath, Locus of the Roil 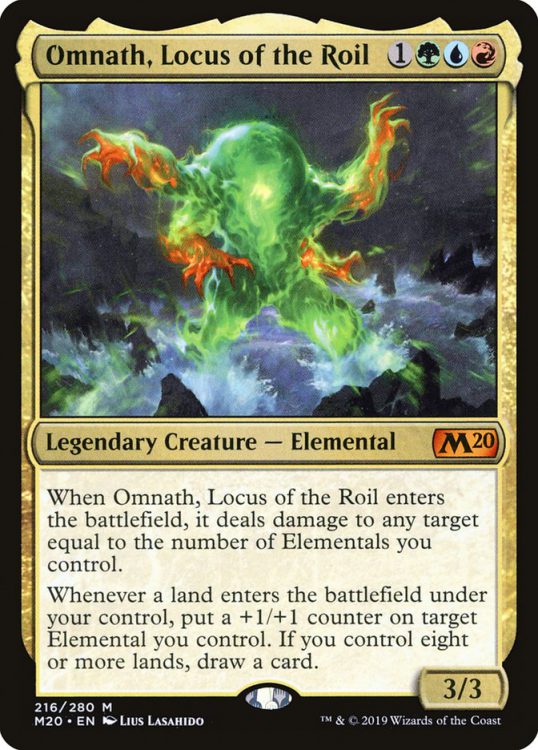 When Omnath, Locus of the Roil enters the battlefield, it deals damage to any target equal to the number of Elementals you control.

Deal damage equal to the number of elementals you control on ETB is nice; it’s generally going to let you blow up a commander or a utility creature.

Whenever a land enters the battlefield under your control, put a +1/+1 counter on target Elemental you control. If you control eight or more lands, draw a card.

This is pretty nice, putting +1/+1 counters on elementals is solid, but the 8 lands requirement is asking a lot. That said, the top contenders for making use of this ability are:

None of these are particularly mind-blowing, and definitely not consistent to build a deck around.  A lot of elementals have a sub-them of lands, and by far the most obvious combo would be Omnath, Locus of the Roil + Fertilid

So you could grab lands, putting counters on Fertilid, removing a counter to get a land, lather, rinse, repeat.  The lands come in tapped, so to net yourself mana you’d need more cards, and this doesn’t net you cards until you have 8 cards.  So this ends up being a pretty durdley combo.

He also combos okay with Animar, Soul of the Elements but most Animar decks aren’t bothering with Omnath.  He’s just too slow to get the effect we want. 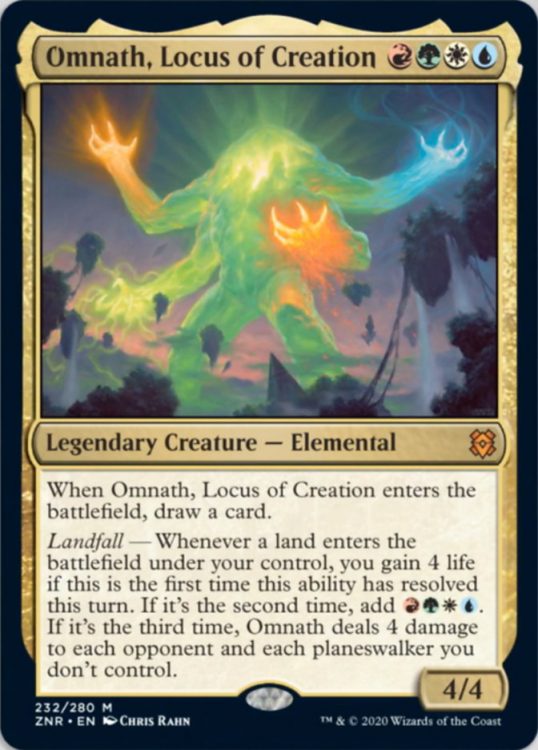 When Omnath, Locus of Creation enters the battlefield, draw a card.

Okay, draw a card ETB is a very nice ability. It’s also not very threatening – if your commander is something like Massacre Girl the etb effect is huge, but it also may force people to stop you.

Landfall — Whenever a land enters the battlefield under your control, you gain 4 life if this is the first time this ability has resolved this turn. If it’s the second time, add {R}{G}{W}{U}. If it’s the third time, Omnath deals 4 damage to each opponent and each planeswalker you don’t control.

This is a weird ability. The first time each turn 4 life, well that’s basically garbage. Second time add {R}{G}{W}{U} well that’s a pretty good ability.  It’ll combo particularly well with Emiel the Blessed any time we drop 2 lands we can use the mana from Emiel to bounce Omnath and get a card, netting one mana. Or just use the mana to ramp fairly crazily. And it’s not hard to drop 2 lands in a turn with fetch lands (which have been reprinted as Zendikar expeditions).

Originally printed in allied colors in Onslaught and enemy colors in Zendikar, these pain fetches are important and strong components of good EDH decks:

Without the pain fetches two-color and mono-color decks become much stronger. In fact, running 3-4 colors is essentially an advantage.

The net effect of this is, the mana base of 4-color decks is essentially significant stronger than most mono-color decks, because the fetches let you thin the deck, and thus avoid mid-game and late-game dead land draws. Obviously there are important exceptions to this, such as being vulnerable to Back to Basics and Blood Moon and Magus of the Moon; as well as search-stopping effects like Aven Mindcensor. But these cards themselves are spread all over the colors, so it’s not as if you can easily make a “non-basic land hate” deck in a mono-color, and if you do you’ll be punished heavily, and quite possibly enable a possible 1-2 color deck. The most realistic is probably Red, running Blood Moon, Magus, and Ruination.

This reverses the natural order of things and now that we have so many new landfall abilities, the pain fetches have gotten even better.

Given all this, we’re excited to build a new deck around the new Omnath, Locus of the Roil.

Some specific combos to be aware of:

Playing lands from graveyard: Ramanup Excavator or Crucible of Worlds or Ancient Greenwarden plus Strip Mine, Wasteland, and playing extra lands per turn Azusa, Lost but Seeking or Courser of Kruphix or Dryad of the Ilysian Grove or others can get really, really mean. This is exactly the sort of land destruction people hate and avoid, but if the game stalls or you get this combo, simply hamstring your opponent’s lands.  Playing these lands also allows us to keep generating landfall triggers if we have no lands in hand, which is part of why they’re included.

Our most likely win con is Kiki-Jiki, Mirror Breaker and Felidar Guardian or Restoration Angel or Deceiver Exarch and attacking with a lot of copies.  Deviever Exarch + Splinter Twin also works.

But the nice thing about these combo pieces is we can just use them for value mid-game, or to generate draws. You can throw Splinter Twin onto Felidar Guardian and then use it to draw an extra card every turn until you get to Deceiver Exarch.  Emiel, the Blessed and dump your second landfall trigger off Omnath into bouncing Omnath for a card, if you went pain land + search to get your two triggers, and you have Azusa, you can do this 2 more times, for a net of 3 cards and 9 life and 3 ramp.

Akoum Hellkite and Valakut, the Molten Pinnacle are both capable control cards that can lead to you ping off important creatures or just doing flat damage to players who get themselves low.  If we really wanted to tighten up the combo and push the competitiveness of this deck these high CMC cards would probably be the obvious cuts.  We could go to a more boring combo with Peregrine Drake, include more colorless land sources so as to fit in Eldrazi Displacer.  Focus on more generating infinite mana with Drake + Emiel or Drake + Displacer or Dockside + Emiel, then dump the mana into drawing via Omnath into a kill card such as Terror of the Peaks.

There are a number of Stax type effects which will generate a lot of value for us.  Umbilicus and Blood Clock force players to return permanents or pay life, and we can use this in the midgame to get lands back into our hands.  Since we can easily gain life we can ignore these triggers if we want, but if we run out of lands and want to generate landfalls, this gives us more landfalls and either slows down or hurts our opponents.  Mana Breach is probably our strongest stax effect aside from the trifecta of artifact mana hate: Karn, the Great Creator, Collector Ouphe, and Null Rod.  You’ll note that none of our artifacts have activation effects.

We’ve included a very large sideboard in case we want to experiment with different strategies, go more grindy or more combo-ey.  Parallax Tide, Parallax Wave, and Opalescence allow us to generate infinite landfalls (remove lands with tide, remove tide with wave, remove wave with wave, recycle – this also generates infinite mana since you can tap the lands as they enter).

The new Omnath, Locus of Creation is fun to build around, but probably doesn’t reach the heights of top-tier competitive EDH, but maybe Omnath the Vth, presumably including black.

Next week: Rankle, Master of Pranks