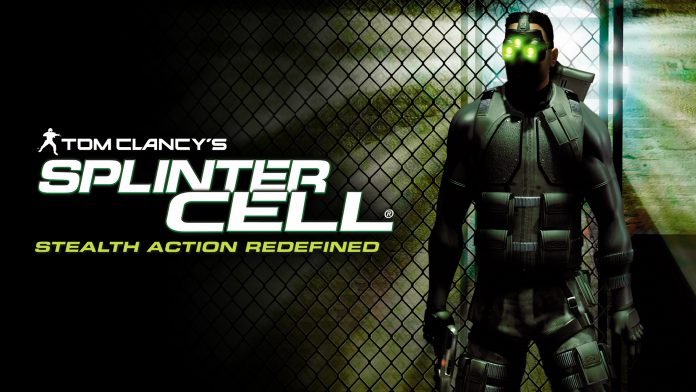 Man, 2002. It was truly a different time. Here’s the attract mode/sizzle reel/”intro cutscene”/whatever it is you want to call the standard video that plays before you hit the start button on Tom Clancy’s Splinter Cell:

That needle drop is real, and it is glorious, and it constituted a very particular sort of frosted tips/goofy hat/huge cargo shorts/Vans aesthetic that would dominate suburban white kid music — the holy grail of the demo, 18-35 — from essentially the 9/12 cultural reset where we all lost our damn minds for like five years all the way through, let’s say, the 2006 midterm elections, and certainly the end of the first year of the Obama administration. Limp Bizkit was already burnt out, essentially, by the end of 2005; Smash Mouth was reinventing themselves after their first big bang on the scene around then, too. The Crystal Method, whose stylings you can hear in that intro video, dropped “Name of the Game” in late 2001 and were an advertising and goof-rock remix mainstay of this period, finally going platinum with their first studio album in 2007 and becoming a fixture in the business for the next decade until they entered a comfortable semi-retirement. If you remember anything about the politics of that time, it is of absolutely no surprise to you that it’s layered there over the exploits of a wry government killer.

Previous to the song kicking in, we’re treated to one of the most bafflingly-designed, hardest-to-read intro scrolls of all time, enumerating the four basic rights all Americans have — lifted from FDR’s famous speech outlining his intentions with big-government social democracy in 1941, not actual observable American history or any sort of legal doctrine you might point to while saying “hey wait a minute” — and then outlining the fifth freedom, which is that the NSA is going to do whatever the hell it wants in the name of protecting them. Looking at where Sam Fisher is now, last seen to great notoriety in a Ubisoft mobile game where you took out thinly-veiled Black Lives Matter protestors being controlled by a secret international conspiracy, this sort of Nineties, truly Tom-Clancy-esque sop to muscular historical American liberal foreign policy ideals feels kind of quaint. Sam’s out there doing fever swamp stuff now.

We should talk about Sam Fisher. He and Solid Snake from the Metal Gear Solid franchise couldn’t escape comparisons between the two for a solid five to eight years, before Sam’s line of games fell off hard with Double Agent, a game carried only by the fact that the iconic Michael Ironside was still voicing Fisher. Probably like most of you, I remember their rivalry at its keenest, when Metal Gear Solid 3 dropped in November 2004 and then Tom Clancy’s Splinter Cell: Chaos Theory followed it in March 2005 (having been pushed for, ah, whatever reason, from a Fall 2004 release). Both games have solid arguments for being the best-in-class, with the conventional — and I think correct — wisdom going that Chaos Theory told a tighter, less ambitious story with better controls and more intense, focused level design, while Metal Gear Solid 3 went all in on a sweeping, cinematic tale that integrated all sorts of Cold War media (most notably James Bond films out of the west, but also Dr. Strangelove and a smattering of Universal Monsters-era creature features) into one of the greatest and most inventive prequels of all time, trading core gameplay legibility and usefulness in places for thematic fights and grandiose storytelling. The two series just threw haymakers at each other with those releases, and you can make great arguments for either depending on your personal preference.

Not so much, I think, with the original 2002 Splinter Cell. While Snake wouldn’t become as easy to control in combat situations as the Chaos Theory iteration of Sam until Metal Gear Solid V, we’re looking at a very different Sam Fisher in 2002, especially if you’re on a PC port of the game, which is what I have access to now, 20 years on — originally it was released in 2003. If you remember how games from that time worked, even cross-releases and console ports to PC would not actually get gamepad support, due to vagaries on how connections and input-formatting worked. So I’m playing Splinter Cell with keyboard and mouse…and I think this is actually significantly better than how the game felt to play on a gamepad. It certainly stands up better than my memory does.

There are a lot of things that 2002 Sam Fisher doesn’t have that his future copy does, independent of your controller setup. If you’ll remember the misty past, there was a day when we tolerated having to grab your opponent from behind with a finicky contextual button prompt before being able to stealth kill him. Like some kind of wrestling game! It’s not so bad in Splinter Cell as long as you’re very careful picking your spots, but you will have to pick your spots, because of the second design decision that goes along with it: Sam’s aim is garbage in the first release (or, if you prefer, is very realistic, given how difficult it actually is to headshot a guy in the dark from twenty feet away in the real world). What’s actually going is that your aim reticule tightens about 90% of the way once you stop moving; then tightens again…really…slowly, and is hard to tell if you aren’t watching the reticule’s exact pixels. Waiting until it’s fully settled — about three seconds, maybe more — gives you a shot almost guaranteed within the reticule within 20 feet or so. Otherwise, you’re on your own, as you can see here as I waited to full settled aim while trying to shoot this light out, getting it on my fourth try:

This gets turned and changed as the series moves forward, but Ubisoft Montreal and company want you to be engaging with their stealth setpieces and feeling the heat of their creeping mechanics, not just skullcapping a guy from sixty feet in the dark down a long hallway like you eventually get to automate in Tom Clancy’s Splinter Cell: Conviction, which is my actual favorite game in the series. Hey, it makes sense in the story too; Sam’s just back from retirement and going to seed in the 2002 entry, and by Chaos Theory he’s fully into the second act of his American life. Just know that if you do go back to this one, you want to be 15 feet closer when you take that shot than you think you will.

The other big problem is that in 2002 we’re still a few years before anyone really figures out coherent, blended mantling and traversal over intentional, bespoke terrain — you know, easily stepping up on a ledge to grab a zipline, easily running-jumping-catching a ledge, that sort of thing. Making it work will come out of the Assassin’s Creed series also from the mega-studio Ubisoft, and making it look good will come from the Uncharted games from Naughty Dog, among others. But in this game, traversal is not still a smooth, solved problem, and you’ll run into situations where Sam will gormlessly do the jump animation, you won’t be in the right place for that jump animation, and he’ll weirdly fall off a cliff or down into city streets or into the middle of a room full of guys with guns. That’s just how it’s gonna go for a while, in video games. And while aiming your gun is much easier with KBM (for what that’s worth, given Sam’s inherent bullet drift as described above), pressing the right buttons to properly jump and mantle is much easier on a controller. Especially since this game thinks crouch should be on C instead of CTRL, which you’re thankfully able to remedy in the settings menu. No subtitles, though.

It’s still probably better to control than release Metal Gear Solid 2 — it certainly blows Metal Gear Solid out of the water in that regard, but that’s not the fair point of comparison here on the timeline — and out of the gate it’s doing a lot more with light/dark stealth than its rival series was, though this leads to goofy things like a CIA guard standing at the end of a hallway and placidly watching as every light bulb down the corridor goes out one by one approaching him, like a horror movie, only maybe going “Hmm! Something’s wrong!” as his sound activation gate is triggered by the final bulb exploding. Given how bad Sam is at shooting, and how bad he also is at quick melee, more so than probably any other game in the franchise this one is about either perfect YOLO runs between stealth, or slowly disabling all lights in the area and then lining up a perfect shot or awkward takedown grab. Because meleeing a guy with Sam’s weird axe-handle elbow always takes at least two hits.

I’ve gone through heavy swings over my life as to which I preferred — out of the gate it was MGS 1-3, then I swung hard back to Splinter Cell for awhile during the disappointment of MGS4 and the long wait before and after that, while Kojima screwed around with the handheld titles and his doomed magnum opus respectively. Pandora Tomorrow and Chaos Theory stand up to basically anything, and Conviction is an absolute blast in terms of slimming the game down and making it faster-paced (and telling a decent story for once), but Splinter Cell 2002 doesn’t quite make it into those echelons. That’s fine, because at the speed and size Ubisoft was working at the time, they put out three of these games in three and a half years — the iterative growth to Chaos Theory, as noted above, was done by 2005.

Maybe we’ll get there in a few years if this feature is popular…or maybe I’ll bulldoze my way through these games again this spring, because despite the control goofs, I’m having more fun with Splinter Cell than I thought I would. Such, I suppose, is the power of nostalgia.

Final Verdict: I had some problems getting the Good Old Games implementation of this to work but after ripping out and reapplying drivers and so on, I’m pretty sure that was on my end. Once it booted up it worked fine, and $10 is a perfectly fair price for a classic of games like this one.