This week’s Hammer of Math takes a likely fatal deep dive into the Contagion and Fester Disciplines of the Death Guard.

With the arrival of The Book of Rust and the addition of a second discipline for members of a Terminus Est Assault Force, infantry-heavy followers of Papa Nurgle have much to rejoice about. In addition to the recently updated Contagion discipline from the core book, an all-infantry army of walkers and foot troopers can also summon the power of the Fester discipline. Games Workshop seems to have taken a lot to heart with respect to improving the quality of the disciplines available, and in contrast to releases in the previous edition most of the new powers are situationally if not outright useful. While we’ve covered some of the Death Guard psychic powers in the past with our look at alternative smites in 8th edition, today we’re revisiting those and the other powers of the Death Guard to look at how they change the math on Nurgle powers.

In order to gain access to the Fester discipline the army must meet the requirements for a Terminus Est Assault Force. This requires that the army be from the Harbingers Plague Company, which gives them access to the 1CP The Wrathful Dead Stratagem, the Shamblerot Warlord Trait which provides a mortal wound-dealing Contagion, and the Infected Remains Relic which can impart the bearer’s Contagions of Nurgle ability on an Objective marker for as long as the bearer is on the battlefield. A Terminus Est Assault Force may not include Mortarion or any VEHICLE units, and if Typhus is in the army he must be the Warlord. Fortunately it also grants him the Harbinger of Death (Aura) Warlord trait which denies ObSec and actions to units if they have a model with Leadership characteristic of 7 or less within 3″ of the warlord and gives him +1 attack as an extra bonus. Neat!

In terms of available casters, your options in a Terminus Est Assault force are:

While there are no Relics or Stratagems which improve the probability of passing the Psychic test for Harbingers, a PSYKER armed with Filth Censers can increase the range of their Psychic powers by 6″. They can also use the Putrid Periapt to gain access to an additional psychic power from any discipline they have access to (meaning the Fester or the Contagion discipline) and once per battle after successfully manifesting a psychic power the can regain up to D3 lost wounds. 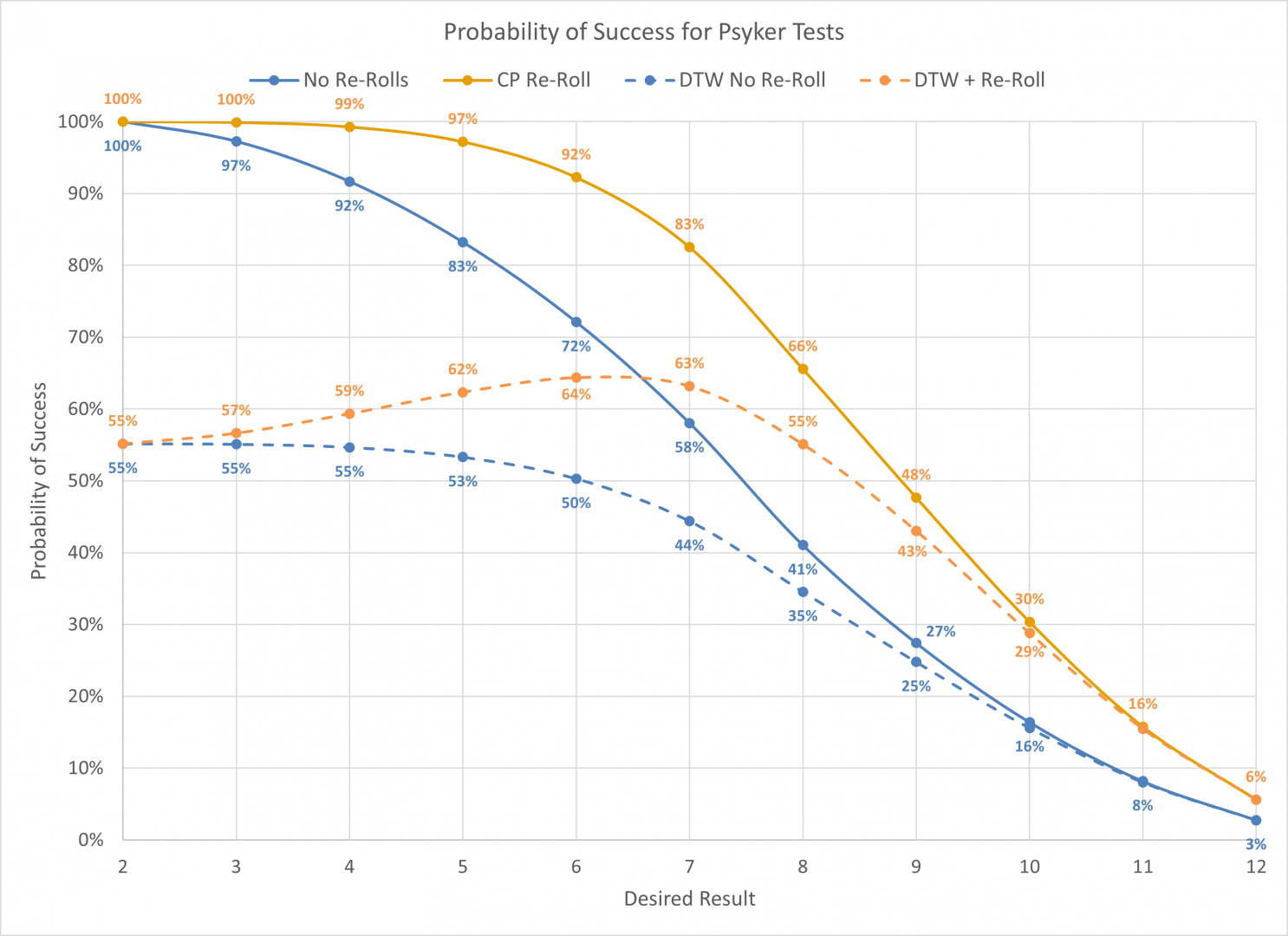 Death Guard psykers have access to the Contagion Discipline in Codex: Death Guard, giving them access to six powers.

Miasma of Pestilence is a straightforward power; a friendly DEATH GUARD unit within 18″ of the PSYKER induces a -1 to hit rolls for attacks (melee or ranged) against that unit. The effect of modifiers on the initial roll is helpfully provided below. The fact that this power is applied against every incoming attack for so long makes it particularly nasty and it’s a favorite power to drop on Mortarion or a unit of Deathshroud/Blightlord Terminators.

This power is also straightforward; an enemy unit within 18″ of the caster subtracts 1 from their Strength characteristic or, on a result of 8+ (which normally occurs 41% of the time), both Strength and Attacks. Modifiers to Attack characteristics are particularly brutal on account of the significant impact of gatekeeping rolls as opposed to driving roles, and the impact on Strength will depend on the relationship to the Toughness characteristic of the target. Remember that Strength and Attacks cannot be modified below 1.

We see the return of large scale mass effect powers with Plague Wind, where every model in the unit rolls a D6 and every result of 6 (or 5+ if the Psychic test was 9+) results in a mortal wound. As usual for powers like these the effect doesn’t really compare with Smite until after the target unit has 10 or 15 models. 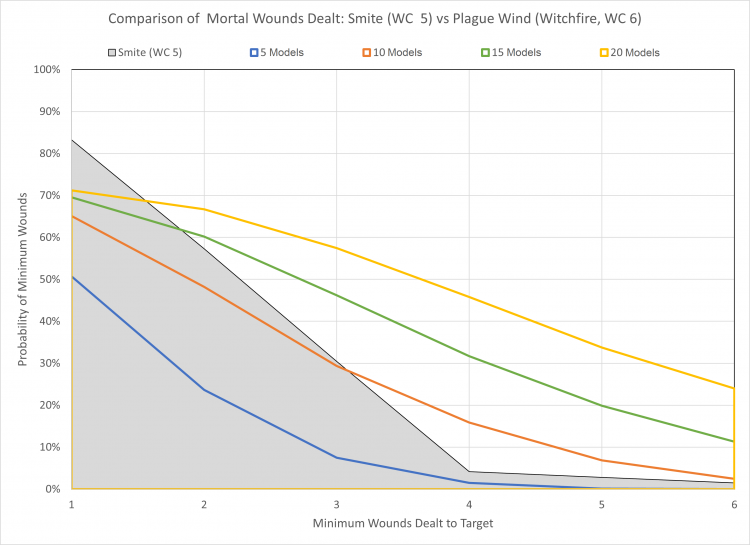 The opposite of Gift of Contagion (wouldn’t a blessing be more of a gift?), Putrescent Vitality gives a friendly Death Guard INFANTRY unit a +1 bonus to Strength and Toughness until the start of the next Psychic phase. The high warp charge means this bonus is not guaranteed, but it’s very rare that a Toughness boost is not helpful. When combined with Rotten Constitution this can get a T5 leader up to T7, although sadly it won’t work on a Daemon Prince or Mortarion as those units are MONSTERs and not INFANTRY, limiting its usefulness.

Curse of the Leper (Witchfire, WC 6)

A complement to Smite, Curse of the Leper targets the closest visible enemy unit within 18″ and rolls 7D6; every result that exceeds the target’s Toughness characteristic results in a mortal wound. This power compares favorably to Smite against every Toughness less than 5, although Death Guard aren’t exactly at a loss for ways to deal indiscriminate mortal wounds. Note that this will combine with the Nurgle’s Gift contagion, which drops the Toughness of enemy units by 1, to improve your odds. 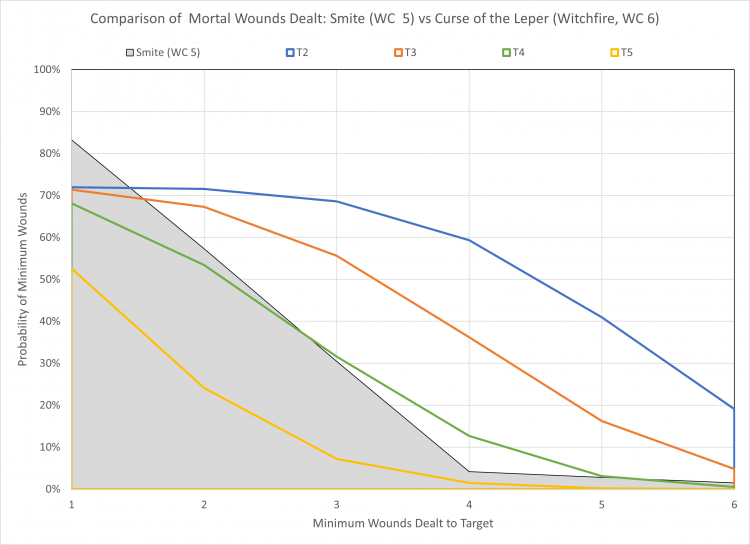 See? This gift’s a blessing. Leave it to Papa Nurgle and/or Games Workshop to have a capricious approach towards the nomenclature of the manifestations of the God of Corruption. This actual gift increases the Contagion abilities of a friendly unit within 18″ by 6″ to a maximum of 12″. This can be remarkably deadly when combined with the Raiment of Atrophy which treats the current battle round number as one higher for the purpose of Contagions of Nurgle or Flash Outbreak (2 CP) which can generously apply one of the special contagion abilities in the army to that one unit.

For psykers in the Terminus Est Assault Force there are six additional powers to choose from, widening your options and giving you more ways to inflict mortal wounds.

It seems we’re back on the “gifts = bad” boat with this one, where one enemy unit within 18″ of the caster has to subtract 1 from their Toughness characteristic until the caster’s next Psychic phase. This ability does not stack with Toughness penalties from any Contagion of Nurgle. A straightforward attack that synergizes well with Curse of the Leper or Accelerated Entropy, although the high WC means no guarantees. The big upside here is having more than double the natural maximum range of your Contagions, making this a good boost to other units’ shooting attacks.

Another high-cost, high-effect power, Lungrot imposes severe penalties on an enemy unit within 18″ of the caster: Until the start of the caster’s next Psychic phase the target unit cannot Advance, can only target units within 6″ for a charge, and cannot re-roll the charge. When the Lord of Decay wants you to remain in a particular spot, you stay there.

Another high WC power, this targets a friendly unit within 6″. Assuming they attack with plague weapons, the hit rolls of the attacks can be re-rolled. Full re-rolls have become incredibly rare in 9th Edition, and this represents one of the rare ways in which a non-CORE unit can receive it.

Rotwind targets a single enemy unit within 18″ of the caster and reduces the AP of all of their attacks by 2. This means that meltaguns now penetrate like autocannons, and power fists feel more like electrically charged love taps. Sadly the AP cannot go below 0, so no giving your Poxwalkers 4+ saves against lasguns.

This power targets a visible enemy model within 12″ of the caster and forces a roll-off. Both players roll a D6 and add their model’s respective Toughness characteristic. If the caster’s result beats the opponent then they take a flat 3 mortal wounds. If the result is equal to or greater than double the opponent’s result then D3+3 mortal wounds are dealt instead. Nurgle casters are T5 at the lowest, and with Rotten Constitution you can make them T6 or have a T7 Daemon Prince, not to mention being able to use Gift of Nurgle or Gift of Infection to drop your target’s Toughness by 1. The only downside is the warp charge; the 58% chance of success seriously hurts the viability. In the most optimistic scenario (a T7 Daemon Prince casting against a T3 target) the chance of dealing D3+3 mortal wounds is only 20%. 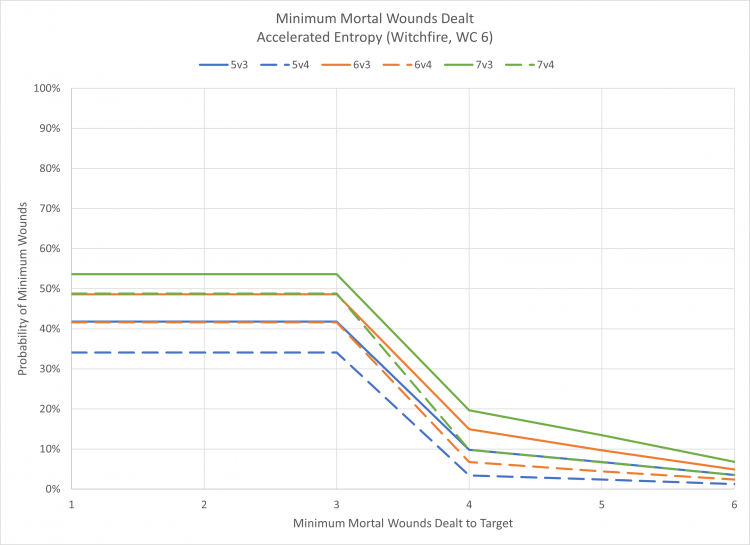 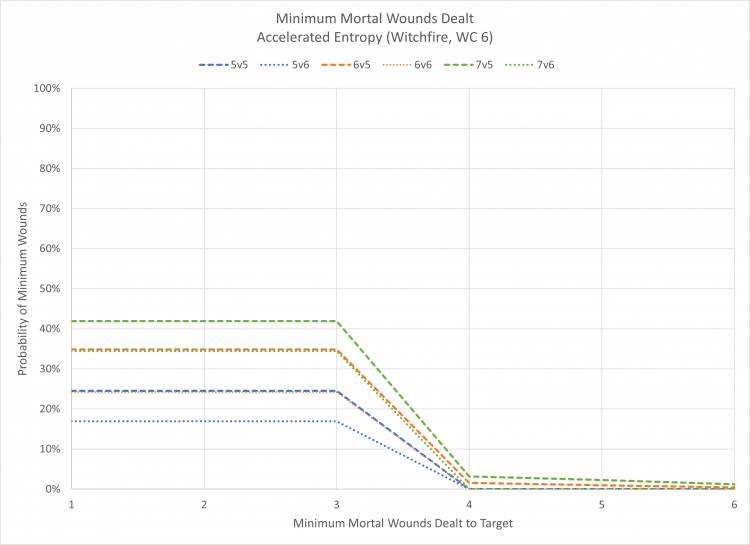 Blessed and/or Cursed Be the Gifts of Nurgle

Nurgle always seems to be a fun faction to write for, and the results of the new book are no different. The rules are cool and fluffy while not being absurd, players have a lot of interesting ways to inflicts mortal wounds and suffering on their opponents, and the entire book seems to be fun and tight. Hopefully the Book of Rust will provide additional inspiration and utility, although the high WC of the abilities in the Fester Discipline does dampen their utility somewhat. Fortunately there are no “gotcha” powers like in the previous edition, where players had to suffer both a high casting cost and an unpleasant level of variability in the outcome.