Hammer of Math: Defeating a God-Engine

This week’s Hammer of Math takes another massive, earth-shattering step into the world of Tiny Titans and the math behind the weapons that they’re armed with.

Combat in Adeptus Titanicus essentially consists of two phases: Inflicting enough hits to force shields to drop and then dealing enough damage beyond the armor value to cause a catastrophic failure. As part of the balance of the game most weapons are better at one task than the other. Weapons that deal enough hits to collapse void shields like mega-bolters and apocalypse launchers have a low strength, while weapons capable of penetrating armor typically only deal one or two hits per attack. There is also a middle ground of weapons like turbolasers which have a moderate amount of shots at a moderate amount of damage, or have bonuses like Shieldbane or Ordnance which can help improve attacks against Void Shields and Armour respectively. We covered the math behind breaking shields from the perspective of the defender in a previous article, but what about from the offensive side? To figure things out I simulated 10,000 attacks using each of the various weapons available assuming either a 3+ BS or the appropriately modified WS for melee weapons.

In general the probability of hitting the target is independent of the target (outside of being able to see it and cover), but there is an exception with blast weapons. If the entirety of the hole of the blast marker (which is about 10mm in diameter) is over the base then attack delivers two hits. This occurs in the event of a hit, or if the attack rolls low enough on the d10 scatter. In general the hole will deviate and stay over the target only 10% of the time (rolling a 1), or 17% of the time if an Acrus Maniple is used. The exception is against the larger based of the Warlord and Warbringer Titans, which have a base that’s wide enough that there is a 55 degree arc to either side where the hole will fit wholly over the base with a 2″ scatter. Realistically this translates to a 13% chance of deviating over the base instead of a 10%, so don’t count on it. As an approximation you can expect a 3″ blast template to get a single hit against most bases on a miss of 3″ or less, and a 5″ blast template will hit most of them on a miss of 4″ or less.

Defeating Void Shields is purely a numbers game; force the enemy to roll enough times and eventually they will fail enough to cause a collapse. In general the effect is independent of the characteristics of the weapon or scenario; every hit requires either a 3+ or 4+ save to prevent the targeted Titan from losing a shield. The exceptions are weapons with the Shieldbane trait which impose a -1 penalty on Void Shield saves at the expense of pushing the reactor, while players willing to take the risk with the Cursed Earth Stratagem can make everyone roll an extra dice whenever they test their Void Shields. In general the numbers correlate strongly with the number of attacks, with the mega-bolters being particularly strong thanks to their Rapid Fire trait. The mega-bolter array in particular has a 11% chance of breaking six Void Shields assuming a 3+ to hit, although these values assume that the opponent will not use Voids to Full! to re-roll ones.

To read this chart, look at the weapon in question and then see how many saves are failed assuming a 3+ BS. The mean will shift about 25% in either direction with a +1 or -1 modifier to the hit roll. The standard deviation is the amount that the number of hits will vary around the mean value; assuming a normal distribution then in general 68% of all attacks will fall within this range of outcomes. It’s not a perfect comparison but for the purpose of a rough estimate it’s a good starting point. 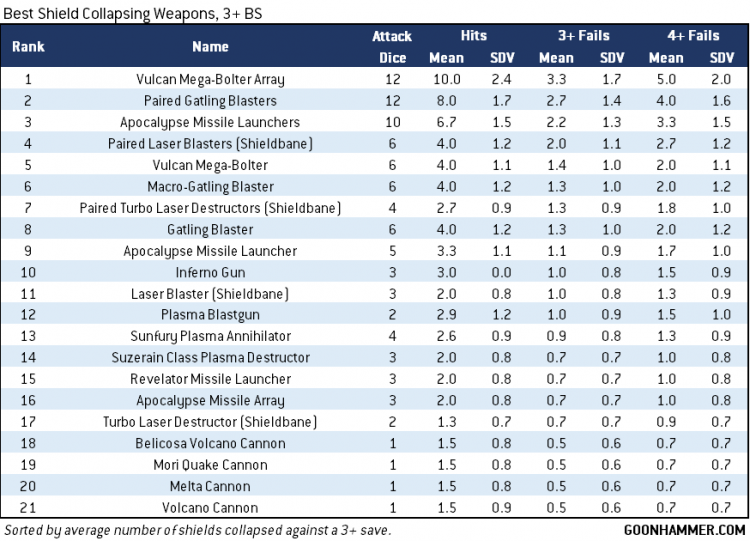 I was curious about the viability of using the Cursed Earth Stratagem in the context of turbo laser destructors; would forcing an extra save with the Shieldbane trait make those weapons more effective? I also took a look at how the Stratagem would effect blast weapons, since in general those single-shot weapons aren’t the best at stripping shields. For weapons like turbo laser destructors and laser blasters the effect of the Stratagem is roughly equivalent to pushing the reactor; when combined the result is a 50% improvement in the shield killing effectiveness of these low-shot weapons. Something to think about if you’re willing to take the risk of your own Titans losing shields just as quickly. What’s particularly interesting is how well the plasma blastgun ends up; with the extra hit thanks to even a glancing blow the gun has the equivalent shield killing capabilities of a gatling blaster. 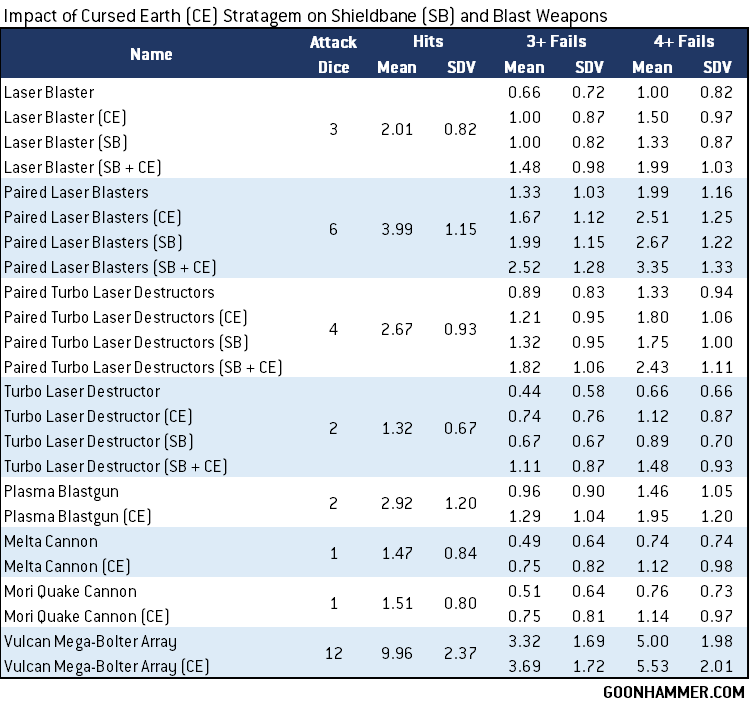 The armour roll is a fairly simple one; roll a d6 (d10 if a Fusion weapon is within half range), add the Strength and any relevant modifiers, and compare to the target numbers on the Titan. Assuming you didn’t roll a 1, if the result beats a threshold value the result will either be a Direct Hit, Devastating Hit, or Critical Hit. The highest armour value in the game belongs to the as yet unreleased Warmaster Titan which requires an AV of 17 or higher to get a Critical Hit on certain locations. Across the board the minimum value required to do any damage to all Titans is AV13, or the floor of what’s required to hurt a Warmaster Titan or the head and legs of a Warlord. The chart below is sorted based on that value. What I found particularly surprising was the effectiveness of the plasma blastgun; the combination of high strength and high number of hits makes it a remarkably flexible and fun weapon, and if you’re willing to run the risk of overheating your Warhound it’s well worth firing on Maximal. The egregious lethality of the Warmaster’s plasma destructors is also clearly evident, with no other weapon coming close to its ability to drop multiple critical hits onto a target. 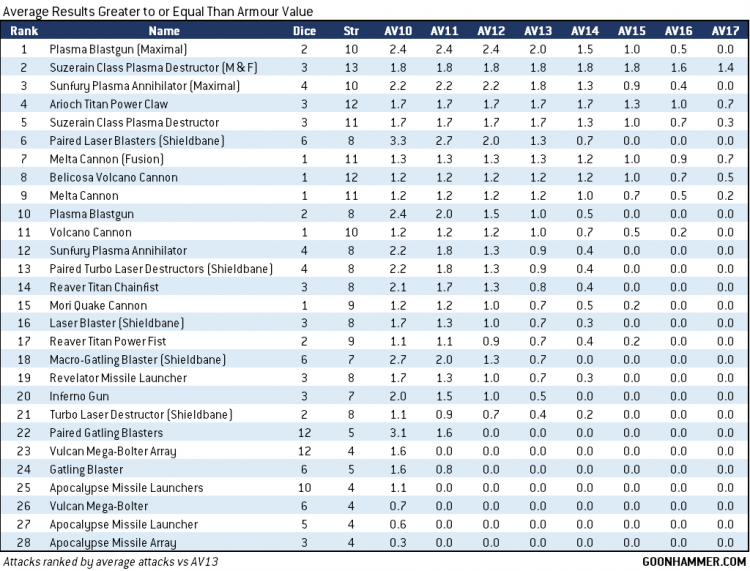 I found this deep dive into the offensive side of things to be very interesting, and will definitely be helping me make decisions about my tiny titans in the future.