Last week I asked you to provide me with some suggestions about topics from Codex: Orks that you thought might be worth exploring, and many of you did just that. So let’s take a look!

Orks is best. They’re fun to paint, fun to model, and with the latest book they’re extremely fun to play. Whether it’s bringing a horde of T5 boyz to krump your opponents’ ‘eadz, unleashing a dreadmob against your enemy in a whirling, clanking swarm of piston-motivated carnage, or trying to figure out how to make a Stompa work there’s plenty of fun things to do. With the new Codex: Orks out (in limited edition with the now sold-out Beast Snaggas box, anyways), there’s loads for us to look at with the new book. We’ve already got several reader submitted questions lined up this week, so let’s dive in!

First up we’ll look at the relative effectiveness of Ork characters, courtesy of a request from Trout. There’s only one problem; there’s roughly ten thousand different Ork characters in this book and all of them have different profiles. Want to kill everything? Take Ghaz. Want to eat everything? Take Skragbad. I’ll save a deep dive for a future article, but to start I’ll compare the Warboss with power klaw, Mega-Armoured Warboss, Deffkilla Wartrike, and Beastboss on Squigosaur against a selection of targets. Ork Warbosses are characterized with a baseline of 5 attacks, typically hitting at S7 to S12 depending on the weapon, hitting on a 2+ and dealing 2 damage behind an AP of -2 or -3. The new Beastboss units come in either a foot unit that hits very similarly to the previous models, or a Beastboss on Squigosaur option which gets an additional 3 attacks which can deal 3 mortal wounds on wound roll of 6.

From the charts below we see that on average a Warboss is going to have a good chance of killing at least 3 Primaris Marines and deal a reasonable amount of damage to a light vehicle, but they suffer against  heavy targets like a T8/2+ Land Raider. The Beastboss on Squigosaur is particularly good thanks to the extra attacks from the squigosaur. Note that these are just the baseline attacks; so when bonuses from Klan abilities, Warlord Traits, Stratagems, and Relics are added expect even more brutality. 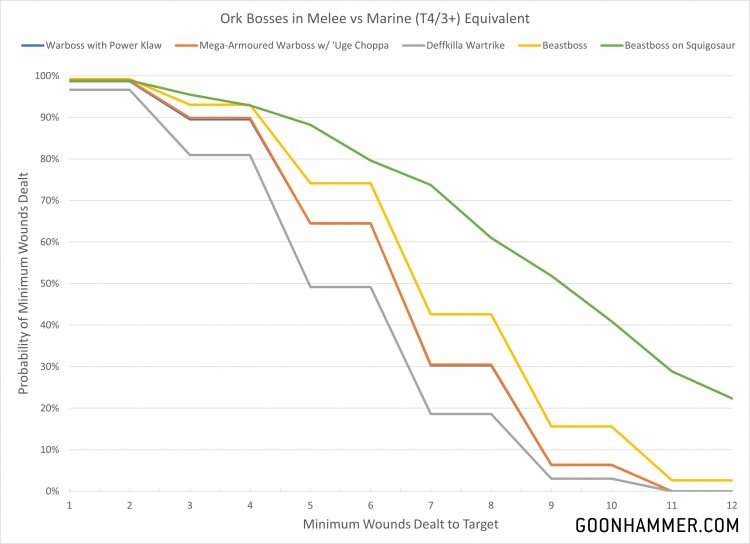 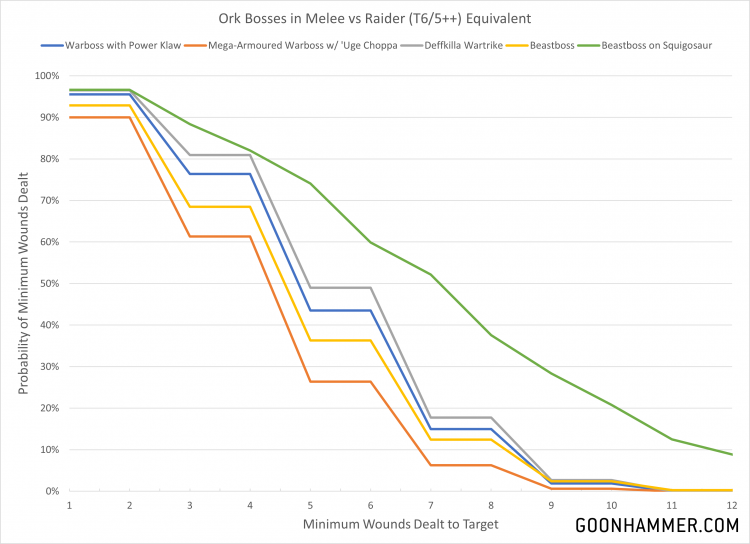 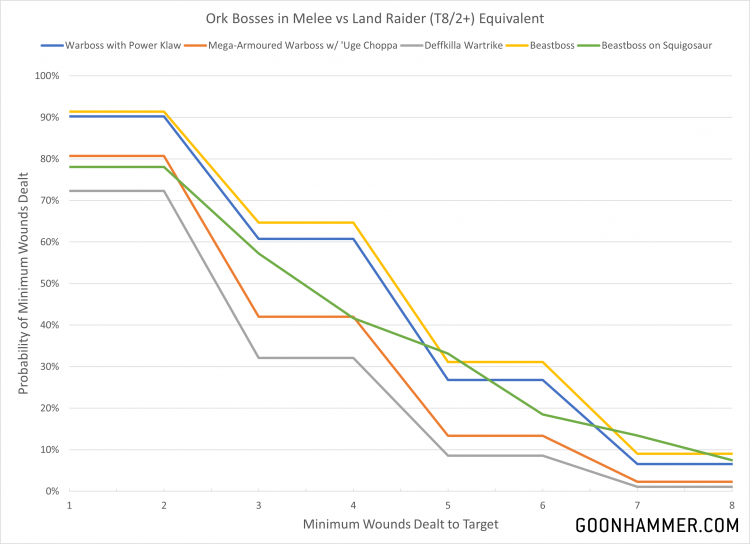 In 8th Edition the Stompa was a cruel joke, and WaneGibbous wants to know if the new book brings any redemption to this iconic Lord of War. The first indication of how bad things can be is in the points; what was previously 900 points is now 675 with only the Movement characteristic having been reduced (from 12″ to 10″). It has the same Toughness and Wounds characteristic as before, still takes 40 wounds to bring down, and is still covered in a huge number of massive weapons. But here are some of the major changes:

Reader synthsapiens is curious about how much more likely it is that a kustom mega-blasta will overheat now that it went from a profile of Assault 1 to Assault D3, and what happens when the Extra-Kustom Weapon kustom job is applied. The first thing to realize is that the overheat of Ork kustom weapons is not the same as an Imperial plasma weapon. The rule is that if any unmodified hit rolls of 1 are made for attacks with the weapon then the bearer suffers a single mortal wound after the shooting is resolved. Compare that to the plasma incinerator which will kill the bearer after any unmodified hit rolls of 1, or the macro plasma incinerator which deals 1 mortal wound for each hit roll result of 1, and you see that it’s much better.

The original kustom mega-blasta had a 19.4% chance of inflicting a mortal wound when you include the possibility of rolling a 1 on the bonus shot from the old Dakka! Dakka! Dakka! rule. Using AnyDice we see the calculated probability of the bearer getting a mortal wound is 29.8% for 1D3 shots and 41.5% for 1D3+1 shots. With Deathskulls there is an opportunity to re-roll one hit die, but in the context of overheating this is only relevant if only one of the attacks produced a hit roll of 1. The end result is pretty significant; assuming the re-roll is only used to mitigate overheating the probability of a Deathskull overheating is 7.8% for 1D3 shots and 13.4% for 1D3+1 shots.