This week’s Hammer of Math addresses some reader submitted questions on loadouts for Paragon Warsuits and Dark Technomancers!

One of my favorite things to do is get ideas for new articles from readers. The best way to submit one is via the request form that I link in every article. Sometimes the questions are a bit light for an entire article, and when that happens I like to grab a few and do a couple of Quick Hits to answer them. That’s what we’re doing today.

Regarding Paragon Warsuit melee weapons, could you do a comparison between the options against different kinds of targets? I’m leaning toward a mostly sword build because the extra attack seems more useful than the higher strength with hit penalty, but would like math to help me decide. Thanks.

The Paragon Warsuit hails from the ‘armored baby carrier’ school of the Adeptus Mechanicus, and in addition to an assortment of horde or tank killing ranged firepower they’re also given the option of taking a Paragon war blade (4 attacks at WS 3+, S6, AP -3, D2) or Paragon war mace (3 attacks at WS 4+, S9, AP -2, D3). They have the option to use Exceptional Proficiency (1 CP) to add 1 to an attack role, so we can also look at that. Because the Strength values are so odd there’s a lot of overlap over the typical forces; T4 and T5 have the same wound rolls, as does T7 and T8. From the chart below we see that the blade and mace have comparable outputs, but in the end it depends on the target. For a 2W model that needs a 3+ to wound the blade is superior, but if the target has 3 wounds or a higher toughness then the mace is a better choice even with the hit penalty. Personally I’m on Team Mace. 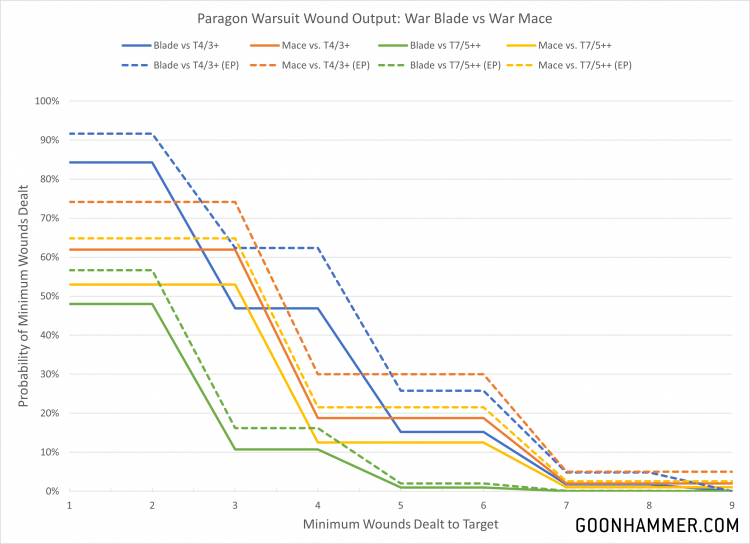 Next up reader Eldradthefallen asks…

Hi Kevin, while you have covered Drukhari and Raiders in particular repeatedly recently, as an aspiring Haemonculus who doesn’t mind inflicting a bit of pain for some gain on my own forces, I was wondering if you could revisit and expand on some of the maths around Dark Technomancer ability to boost weapons? In particular the damage output of over charged Disintergrator cannons vs Dark Lance’s on Raiders and the potential lunacy of over charging on platforms such as Venoms, Talos, Reapers, and Tantalus?

Particularly masochistic Haemonculi have the choice of joining a Coven with the Dark Technomancers Obsession. When shooting with something other than a liquifier gun the player can choose to enhance the attack, gaining +1 to wound and +1 to Damage but at the expense of causing the unit to take 1 mortal wound for each unmodified hit roll result of 1 (and hit rolls can’t be re-rolled). VEHICLE or MONSTER units get it even worse, with each 1 inflicting D3 mortal wounds. There are a lot of factors at play which will decide how effective each weapon is against various targets.

The effect of modifiers on gatekeeping and driving rolls is well established. The +1 to wound modifier will likely boost the average outcome by 25% to 50% depending on the initial wound modifier, while the effect of the improve damage will entirely depend on the original characteristic. It’s a useful offset against threats like Orks, where their Ramshackle rule is seemingly designed to mitigate the kind of high volume, relatively low damage firepower that Drukhari excel at.

One thing that interested me was the opposite side of the equation; how likely is it that a unit could potentially kill themselves? With the Obsession explicitly banning the use of re-rolls and VEHICLE and MONSTER units taking 1D3 mortal wounds per result of 1, how bad could things get? Using the power of AnyDice we can find out. The first charts are for attacks made by units other than VEHICLES or MONSTERS. To use these charts, reference the number of shots you intend to fire and then look across that row to see the probability that at least that many mortal wounds will be inflicted on the firing unit. The bottom line is that even when firing 12 or more shots the probability of inflicting more than 3 wounds is very low, especially when a 5+ Feel No Pain is active from Insensible to Pain. 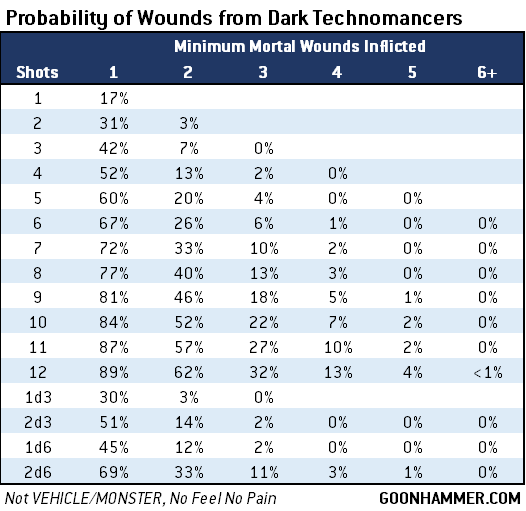 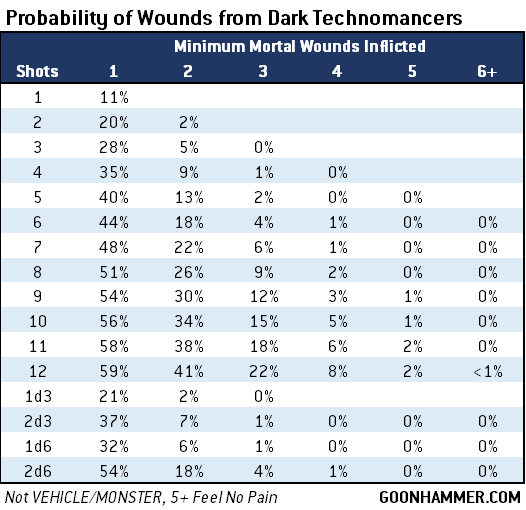 Things get a little more complicated when you include the 1D3 mortal wounds inflicted on VEHICLE and MONSTER units which roll unmodified hit results of 1. In general the chances of something like a Talos killing itself in one shot with something like a splinter pod or a pair of splinter cannons is small, but as the unit loses wounds it becomes more and more possible. Good hunting!

Next week I’ll be taking a look at the new Codex: Orks, so if you have any suggestions on things I should be looking at please submit them here. If you have any feedback, feel free to drop a note in the comments below or email us at contact@goonhammer.com. And as always, thanks for reading!