On Saturday Games Workshop revealed a lot of upcoming information about the new Necron and Space Marine codex, and for the Astartes there was a considerable amount of information that we can actually analyze and process. The reveal was provided on Twitch and followed up with an article on Warhammer Community. Hopefully Games Workshop will continue this trend of providing Datasheets and other crunchy information in their previews.

The new Space Marine codex due next month (along with the Necron codex which is full of amazing models, just look above) looks like it’s going to merge and update a lot of content while also providing new Primaris units. In addition to those shown in previous reveals like the Invader ATV and the Gladiator tank Saturday’s Codex Show revealed new Gravis units, an updated rule for melta weapons, and the Storm Speeder Hammerstrike. GW provided rules for several of these units so we have a chance to look at how effective they’ll be.

Big Beautiful Marine aficionados will now be able to field full patrols, battalions, and brigades thanks to the addition of the Heavy Intercessor Squad, a Troop choice that includes heavy upgrades to the Intercessor bolt rifle options as well as the option for 1 in 5 models to field a boosted heavy bolter. While we don’t have actual point values just yet, Power Level roughly translates to 1 PL per 20 points so it’s likely that individual Heavy Intercessors will cost around 28 points per model. The Datasheet below is from Warhammer Community.

The balance of AP, damage, and number of shots are sufficiently different that it may not necessarily be obvious what the best choice is, so we ran some simulations against squads of Intercessors, Gravis, and Ork troops to get a sense of which option would be the most effective. Since 9th Edition is so heavily dependent on movement and contesting objectives we also examined how the heavy options would fare when the units were forced to move. First up is a comparison of all three types against Intercessors and Gravis units. 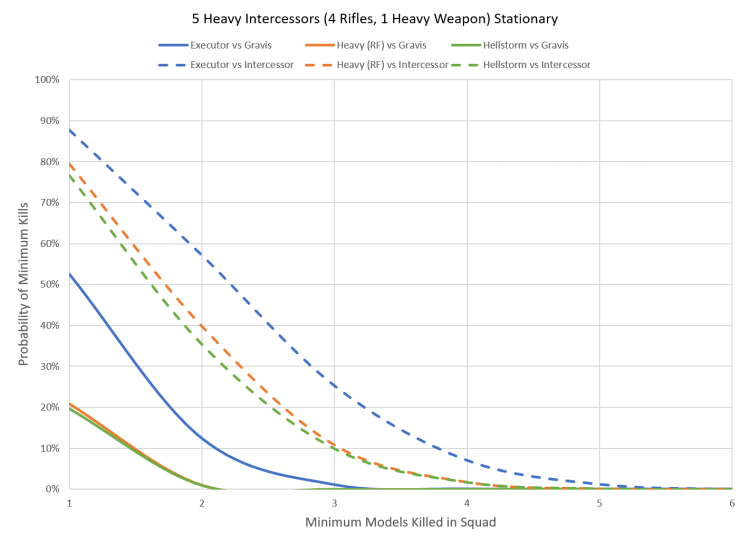 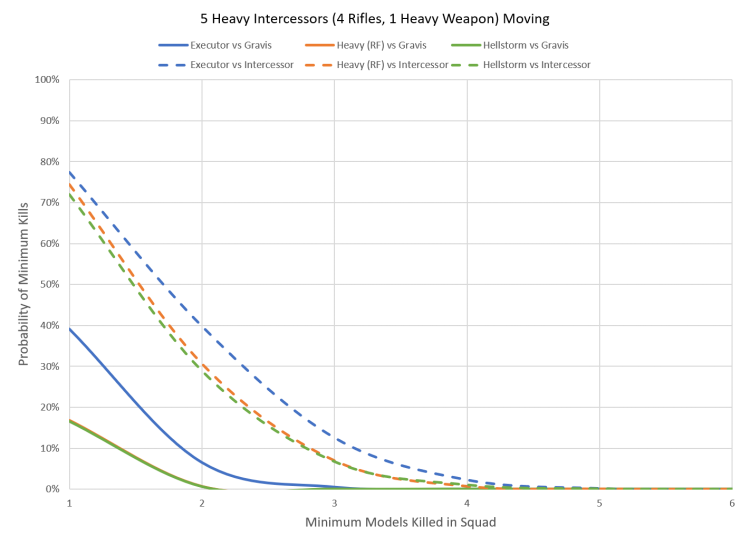 The bonus damage and armor penetration of the executor variants made it the superior choice for killing power armor target regardless of whether the firing unit moved or not. With a 42″ range the executor variants will be a threat to nearly the entire board, and as all of the weapons are heavy it makes sense to add the heavy bolter for the added shots and damage. The output of the heavy bolt rifle and hellstorm bolt rifle essentially overlap, making the hellstorm much more appealing on account of being an assault weapon. Although not shown in the graph I also ran the numbers against 7 stalker bolt rifles; the executioner variant was still better. Of course there are more than just Space Marines out there to kill, so we also took a look at how 5 Heavy Intercessors armed with the hellstorm bolt rifle variant (no heavy hellstorm bolter) would compare to an equivalently costed unit of Intercessors with assault bolt rifles or Aggressors with boltstorm gauntlets. 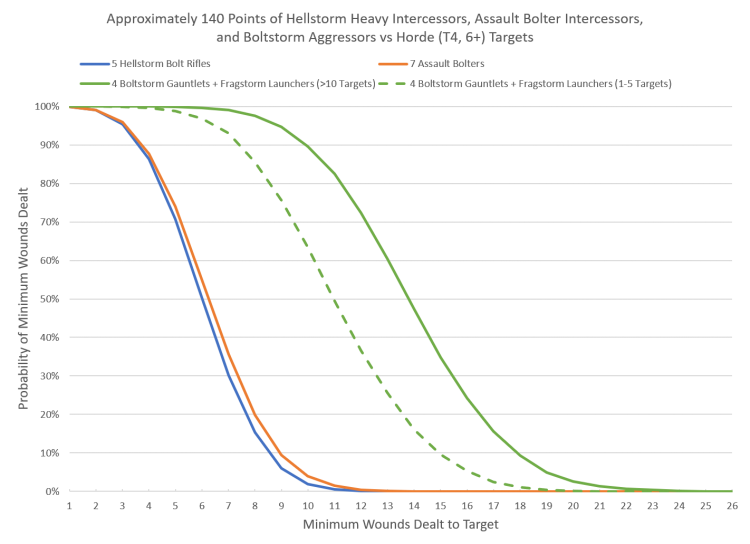 The extra strength of the hellstorm bolt rifles offsets the added shots of Intercessors, but both are blown away by an equivalent value of Aggressors. The Intercessors would fare better against horde models with a lower toughness, but in that scenario the boltstorm gauntlet variant would be even nastier. The analysis above assumes that all of the units are moving so the Aggressors don’t get the option to fire twice. Overall for players who are looking to field a lot of Gravis units it wouldn’t be the worst idea to give Heavy Intercessors executor bolt rifles for heavy targets while Aggressors mop up the chaff.

It turns out the rules from the Indomitus box were temporary and that melta weapons will be seeing a significant boost to their effectiveness. The updated stat line was revealed by Warhammer Community:

This is an extremely potent change, altering two driving rolls in the case of the multi-melta and dramatically enhancing output. Instead of re-rolling damage when under half range (and potentially dealing a single point of damage with a one shot anti-tank weapon), the melta weapon gets a flat +2 bonus and a 17% chance of dealing 8 damage points to a single target. The chart below shows the output for a unit of 3 Eradicators (a very common option for Space Marines) under the basic damage, current rule, and Codex rule. As you can see the output is significantly enhanced, with the chance of taking out a Repulsor in one shot doubling. The addition of 2 bonus damage makes melta weapons extremely nasty at close range and provides a much needed boost to a historically maligned weapon. 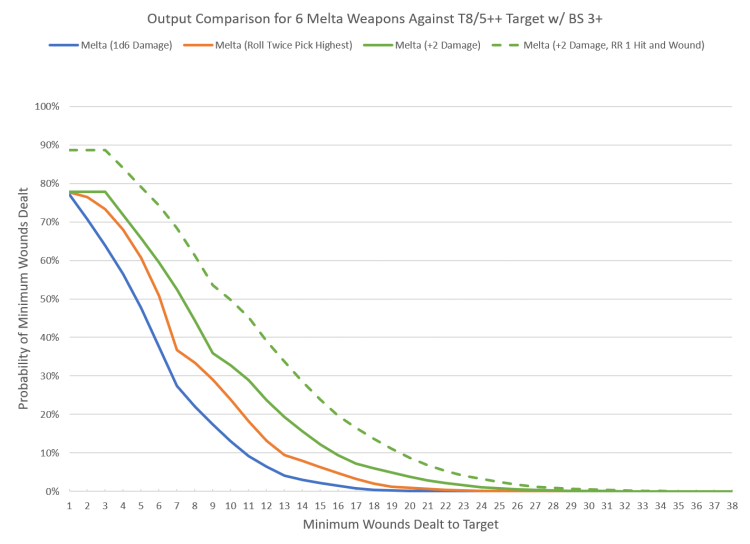 One of the more prevalent issues regarding Primaris-focused Astartes forces was the lack of anti-tank options, with Hellbasters being the primary ranged solution before the exorbitantly costed Repulsor Executioner showed up. The addition of Eradicators shook things up, and the presence of new Primaris speeders like the Storm Speeder Hammerstrike continue to bring more to the table. These fast, lightly armored speeders come in three variants (anti-personnel, anti-tank, and anti-air) and Games Workshop also provided the Datasheet for the Hammerstrike variant.

5 S8 shots will be a very unpleasant threat to a variety of targets, and I imagine Salamanders players in particular are drooling over the possibility of fielding a triple-barreled melta destroyer. We simulated the output against a variety of units in the chart below, showing how many of each type would be killed. The mean output and standard deviation for the Hammerstrike was 10.2/5.6 for the Rhino target and 7.6/5.3 for the Repulsor target, indicating that a pair of Hammerstrikes has a decent (but still below average) chance of killing a Repulsor if they can get within half range (and there’s a roughly 1 in 20 chance that one can do it by itself). The combination of firepower and offensive capability should make this a fun addition for Primaris players. 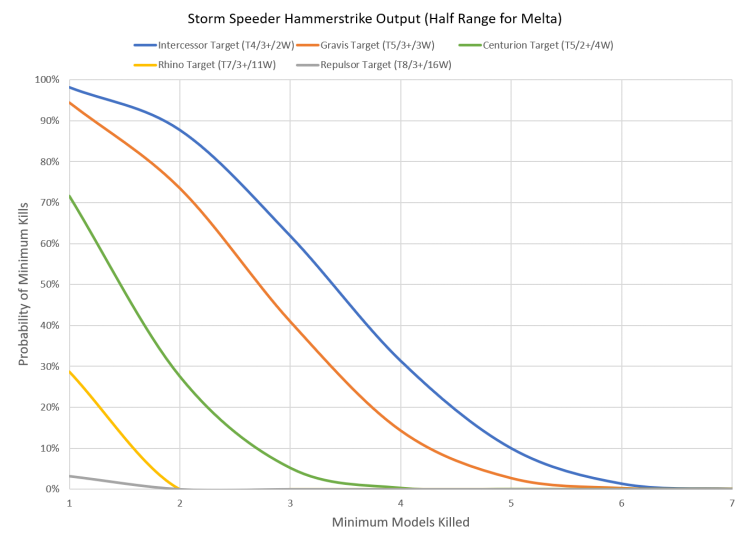 The new books are scheduled to be available in October, so it won’t be much longer until Games Workshop’s flagship army gets even more options and units. Maybe Cawl is right after all. Either way Primaris players should be happy with the Heavy Intercessors and their ability to absolutely slaughter other power armor units, the boosted melta rules, and the speedy punch offered by the Storm Speeders. Personally I’m even more excited by the new Crusade rules, including the option to take a gravely wounded character and inter them in a dreadnought. If this is the level of quality we can expect from future books every player should be excited.