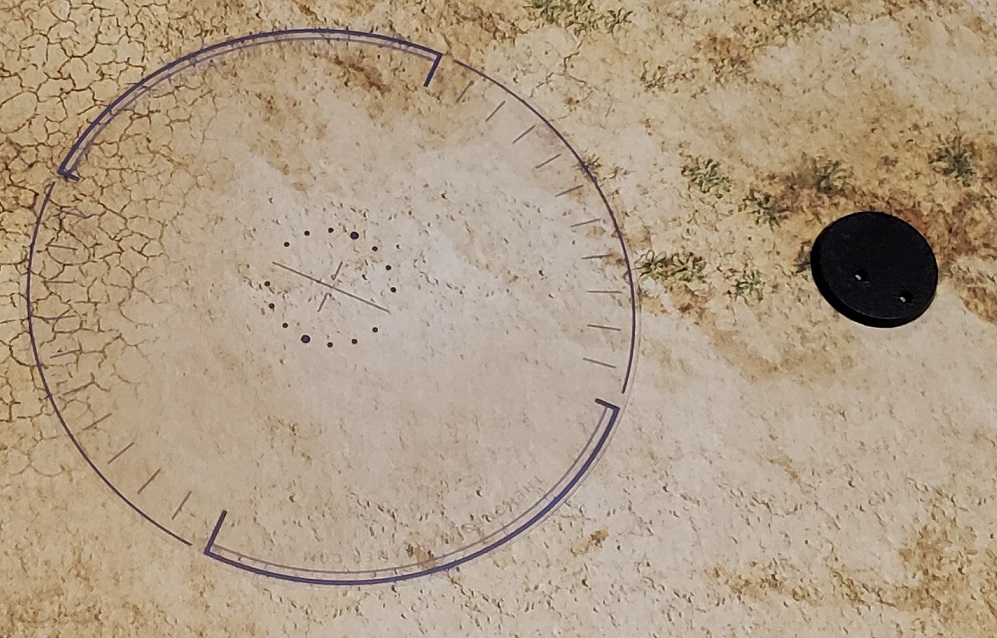 Today Eifert Posting is reviewing the objective markers from Honest Wargamer. You can find them on their product page here.

So I am building up my home gaming area and one thing that I didn’t really have is objective markers. I was using unused 40 mil bases when playing or testing things. This was fine, but I wanted a long term item that was more purpose built

The Honest Wargamer objective markers caught my eye. They are a British company, so I organized a bulk order to get my hands on them. You get 6 plastic objective aura markers. The conceit is that it marks both where the objective would be AS WELL AS the aura where a unit is contesting the objective. Basically, if your base is touching plastic you’re in. Editor’s Note: Objective markers like this are pretty common in competitive play for 40k, since tournaments have been using them for years now. It’s been interesting to see them become more widely adopted by casual players in 9th edition, but if the Honest Wargamer ones aren’t your style, there are many other options to do the same thing, though those tend to be opaque neoprene.

These objective markers retail for 19 pounds, or about $24, and by ordering 9 sets I was able to get the total cost with shipping down to about $29 per unit. Customer service was very good and I had no concerns over how they shipped. They shipped as a unit and I looked over all 54 markers and found no issues, misprints, or imperfections. 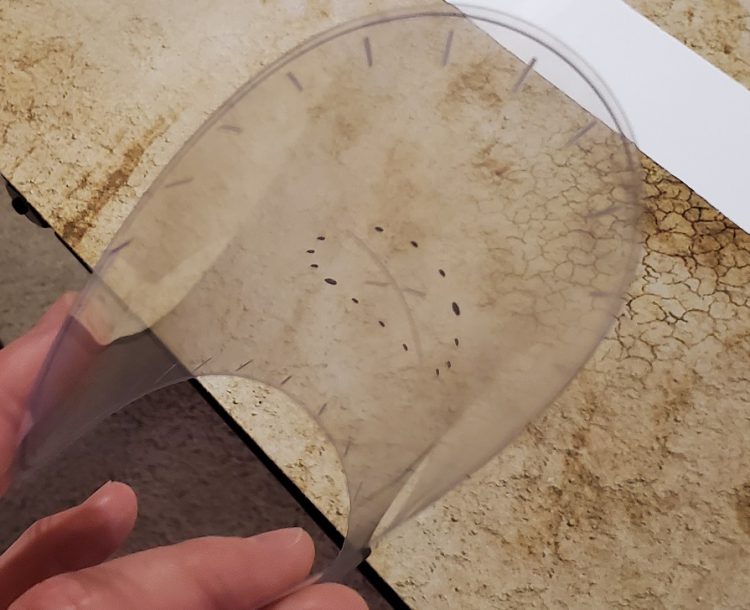 The material is a clear ~1-2mm plastic with print markings and logos.  It seems durable.  It keeps its shape and would survive anything but a deliberate crease.  It does scuff a bit, and while you are holding it you can see these, but they are not visible when resting on a surface.  The print is highly visible and seems durable.  I personally think the ~30$ with shipping is reasonable for something I will use every game I play – and like supporting people like Rob – so I would say it’s an acceptable value.

I do not play a lot of games, but the games I did play (before the world started ending) were in varied areas.  I’ve played with neoprene markers, bases, coins and GW model markers and these are my favorite option I’ve seen.

There are a few reasons these are my favorite option so far. 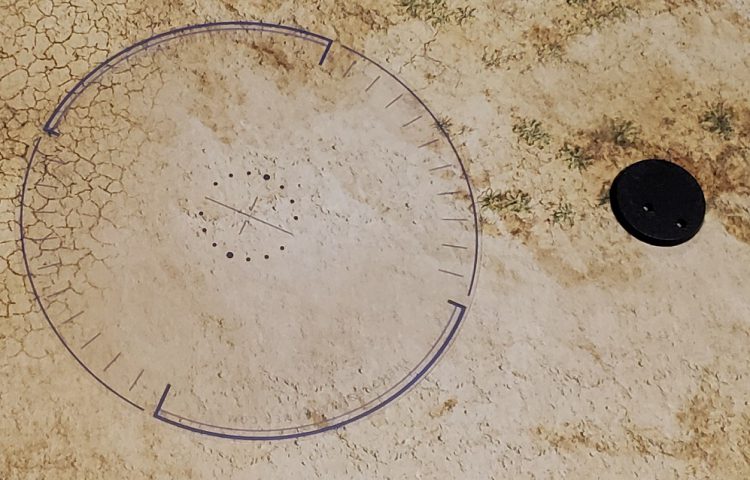 It’s very clear what is and isn’t in range of the objective. The included photo shows the exact same scenario:

It’s not immediately apparent who is controlling this objective on the left.  At a casual glance it looks like it is evenly contested, but measuring would show that the 4th marine is out of range, while 4 necrons are in.  The new objective makes it clear at a glance. I am not much of a tryhard and my games rarely get chippy, but knowing instantly who is in range of what seems like a positive outcome for both players.

This product makes models more stable and limits measurement.  I spend a LOT of time painting my models, and so I hate things that make them unstable. Having a flat objective marker that is effectively flush with the table eliminates wobbly models entirely. In addition, having the objectives effectively permanently pre-measured reduces the time spent waving a tape measurer around for that little metal bit to snag a model and fling it across the room.  Other people also do that.  It’s not just me.  Shut up. 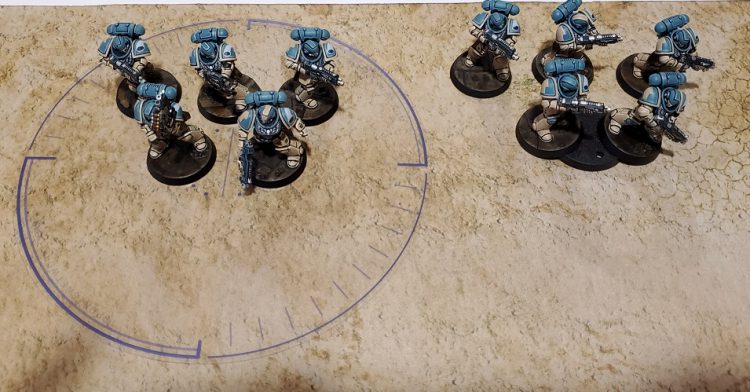 These interact with terrain very well.  Neoprene mats are raised and so terrain can be lifted off the table.  These allow terrain to lay flat and are unobtrusive when you place terrain on the board.  The inner marker is clearly marked so you know where you can and can’t place stuff.  For example, the below image shows an illegal placement of terrain (left) and a legal one (right).

Other than cost I really don’t have much.  They have somewhat less friction than you’d like.  I think it is possible you could nudge them accidentally while they are uncovered or while you are placing the first model on them.  Once they have any weight on them they sit on neoprene quite steadily.  I would tell my opponent at the beginning of the game to be careful placing the first model or two, and I may try adding a bit of tape residue to the underside to help with this.  I would call it a minor issue, but not a deal breaker.  When I played a practice game on them I shifted one turn one, but by 2-3 I understood how to avoid it.  If you’re one of those weirdos who uses battle-boards these may be much more slippy.

I understand why they aren’t, but I really wish these markers were numbered.  It doesn’t seem like numbered objectives are a big thing in 9th, but I would prefer these had been numbered in case it is ever needed.  I imagine painting these would be tough as you couldn’t varnish them without fogging and there’s no way paint will not rub off with use.

Overall, I’d recommend these. I think they’re a great product made by someone I like. I think he would be greatly served by finding an American distributor, but if you are a Brit or can find some friends to order in bulk they are a solid purchase. 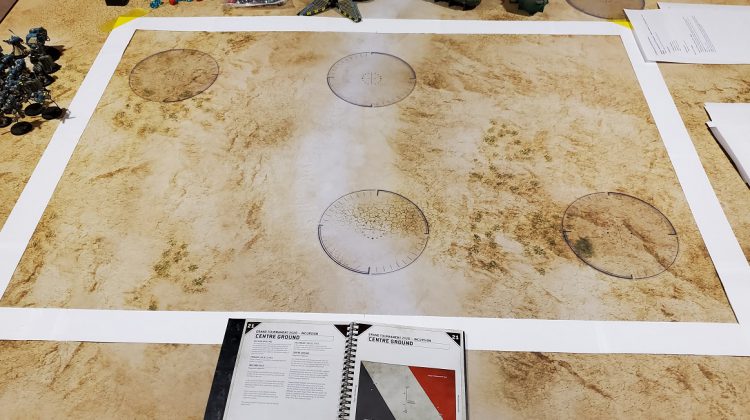 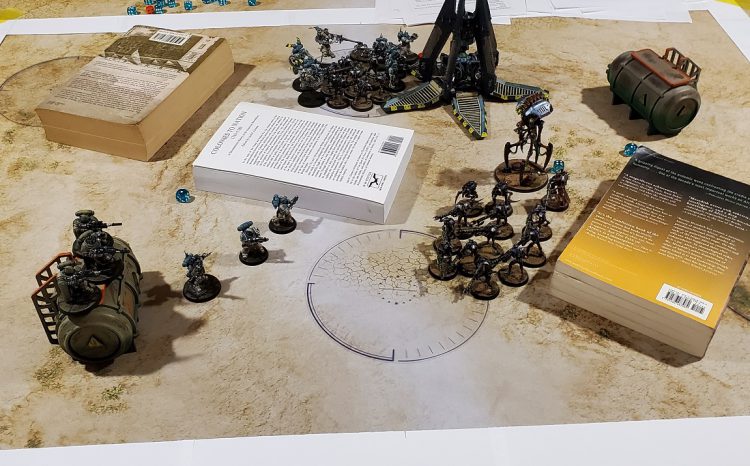 (I have a bunch of terrain on order, the days of history-book-hills are numbered.)