How to Base Everything: The Floor is Lava!

Basing is a critical part of the painting process. Armies on the battlefields of the 41st Millennium or the Mortal Realms will find themselves fighting across a wide variety of terrain, from lush jungles to barren rockscapes, industrial wastelands to agrarian fields. Your basing helps tell the story of your army – where are they fighting and why? In the spin-off How to Base Everything series, we look at different methods for basing your miniatures, so that you can locate them in time and space. In this week’s How to Base Everything, Head58 is talking about his experiments making lava bases.

I recently got it in my head to make some lava bases for a new army – cooled bits of stone over hot molten magma. While poking around the internet on how to make them look good I noted a recent(ish) Citadel Technical paint – Mordant Earth. But a test base had some strange results so I thought I’d document my experimentation with it and other methods for the benefit of you, gentle reader.

First, get a sense of what kind of effect you’re looking for. Google Images may be your best and widest resource here – I looked at images the lava fields of Iceland and Hawaii and settled on a rocky, “clinkery” (an actual word referring to the blocky chunks of lava) look rather than a smooth surface looking like melted plastic. Some very brief internet research tells me the kind of effect I’m looking for is called ʻaʻā while the smoother kind of flow is pāhoehoe. See, this hobby stuff can be educational!

When using other Citadel Technical paints like Agrellan Earth in the past my go-to strategy was to paint the base a darkish color, cover that with a layer of PVA glue, then slop on the Technical like chopped liver on a cracker, and let the whole thing dry overnight. The usual result was a nice, wide set of cracks in the material. Something about the PVA making the technical paint pull apart more, I don’t know, I was a history major.

But when I applied this approach with Mordant Earth I found the PVA itself and the layer of paint under it also pulled apart leaving the primed base or maybe the milky PVA underneath exposed. 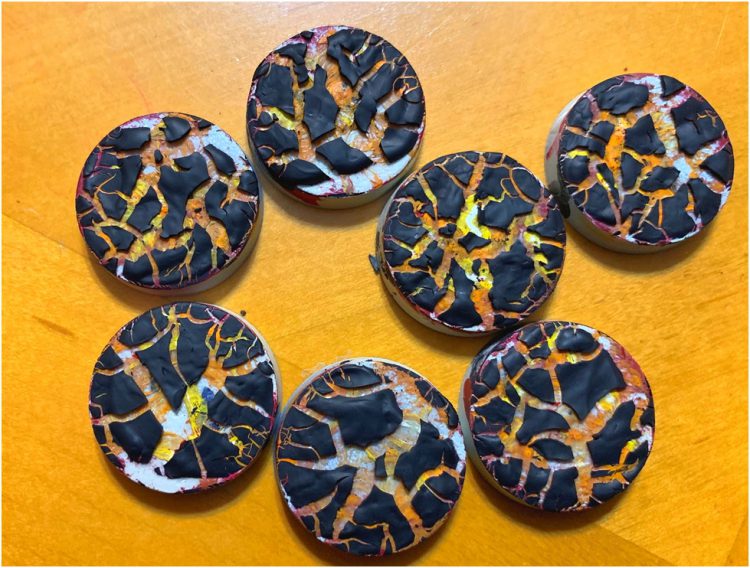 I wondered at first if the white I was seeing was the base material of the Mordant Earth somehow separated from the pigment, but no, the paint itself had pulled apart. I was able to peel off the toppings from the base and this is what it looked like underneath – you can definitely see where the red paint retracted leaving chunks of white showing through. Weird, and kind of gross. 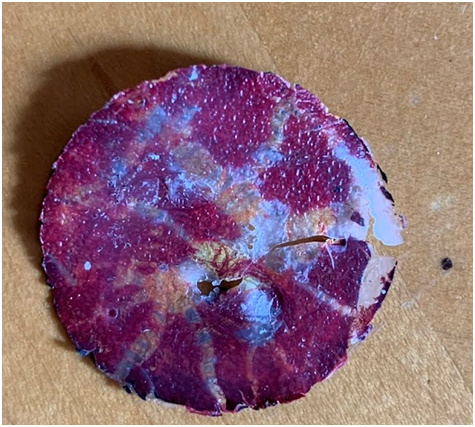 In addition, I thought the surface of the dried Mordant Earth was just too smooth and shiny for what I had in mind. It was far more pāhoehoe than ʻaʻā. It looked frankly like a hard chocolate coating which just made me need to get some ice cream while I pondered what I was going to do next.

What Went Wrong, and How to Do It Better

Off again to the internet and I found a video on Warhammer TV suggesting to put down ‘Ardcoat on top of the paint rather than PVA. Same principle I suppose and a good place to start. And should the PVA be above or below the paint? I broke down a number of test scenarios and set about to see what would look best.  All of these bases were primed with Wraithbone first, all references to “paint” are a splotched mix of Mephiston Red, Vallejo Light Orange, and Vallejo Flat Yellow. Here’s what I inflicted on each one: 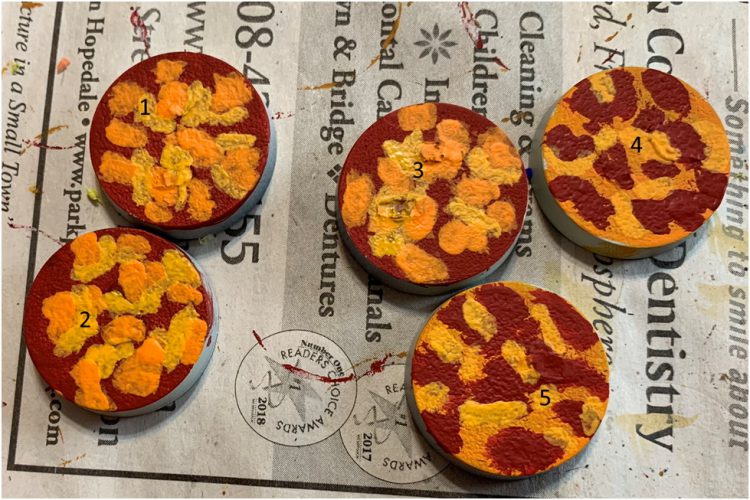 Like all the crackle-type Citadel Technical paints, the best application is to slop on a thick, heavy coat so that they will dry with nice deep cracks and then let it sit overnight (or hit it with a hair dryer if you’re in a hurry).

And after letting all these set overnight I had…

Subjects 8 and 9, and to a much lesser degree 5, showed the same weird results as my first batch with the paint separating and white streaks showing underneath. The common element in those three samples is PVA – 8 and 9 had a layer under the paint, 5 only on top of the paint. But 2 and 7 also had PVA on top of the paint.  The upshot here is that I should just avoid using PVA under my base coat of paint and probably under any of the Citadel crackle texture paints, which is what Warhammer TV told you to do in the first place.

But let’s also look at the texture of the results. I still don’t love the very flat, smooth surface of the dried Mordant Earth.  And the fragments in some of the cases (5 and 7, to a lesser degree 4 and 6) are very small, which makes standing a figure on them fairly difficult unless it is straddling multiple fragments – not out of the question but not exactly what I was looking for. The size of the fragments in the Martian Ironcrust is more what I was hoping for. The surface texture of the Martian Ironcrust was also a little rougher, closer to the ʻaʻā that I was trying for although not as close as pure Astrogranite Debris. Painted with some Eshin Grey that would probably look very good. The pure Astrogranite Debris was probably the closest but the coverage wasn’t great. It shrinks up a bit as well, although certainly not as much as the Mordant Earth so I would need to increase the coverage if this is the approach I choose.

It was at this point that I was discussing the bases with my brother, and he obnoxiously asked if I’d used straight PVA or watered down. Another variable to consider, another round of samples!

I threw the last one in there because I thought I should try the old school approach rather than all these fancy technical paints, just to be sure.

In this batch you can really see the separating effect, especially when there’s watered PVA under the paint (11, 13, 14). That’s probably what I did the first time out. It’s interesting that #15 pulled in from the edges so much – not exactly sure what caused that. I don’t love the cork because the pieces are too tall and there’s not enough coverage, which is easily fixed by picking smaller pieces and more of them, but I quite like the look. With a splash of Nuln Oil and a quick drybrush that would look very nice.

As one last try to get the ʻaʻā look I was shooting for I took one of my earlier Paint > PVA > Mordant Earth bases and put just a small bit of Astrogranite Debris on top of each of the little shards of “rock.” In terms of the texture and the spacing of the rocks I think this may be my favorite. It’s a bit time consuming but having the Mordant Earth as a guide for placing the Astrogranite feels more organic than the base where I just plopped down plain Astrogranite. Someone with a better sense of aesthetics could maybe get this look by doing that, but I needed a guide along the way. 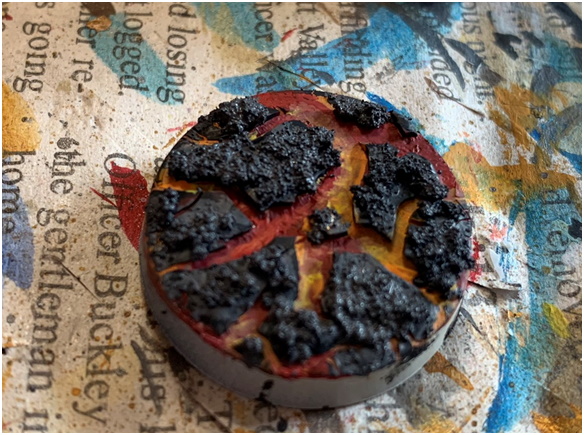 In conclusion, PVA, straight or watered, seems to be a bad foundation under Mordant Earth, and especially when applied under the paint itself. I’m not sure where the idea to do that got into my brain, and in retrospect it makes perfect sense. Stick with a recipe of primer > paint > gloss varnish > Mordant Earth and you should be pretty safe. Use a big thick layer of the Mordant Earth to get the best cracking, and the gloss varnish should give you nice wide cracks. You may need to touch up you paint underneath a little here and there but it’s supposed to be a swirly mess of hot death so it doesn’t need to be pretty.

In terms of the texture, if you’re looking for very smooth cooled lava, Mordant Earth might be a good option but it doesn’t even look like a pāhoehoe flow. I might use threads of hot glue to get that ropey, viscous look and then paint it with Eshin Grey or another near-black grey.  I definitely don’t think Mordant Earth is a good choice for ʻaʻā lava unless you’re going to drop some Astrogranite on top and even in that case Martian Ironcrust or even Agrellan Badland might serve you better for a broken up surface.

Got any feedback, tips, pointers, or questions about these methods? Drop us a note in the comments below or email us at contact@goonhammer.com.