In our Miniature Review series, we look at the wide world of tiny soldiers for cool stuff to share with all of you. This week, SRM is reviewing the Elite Companies French Infantry 1807-14 by Perry Miniatures.

Disclaimer: The miniatures in this review were provided to Goonhammer.com by Perry Miniatures.

Today what we’re looking at is the French Elite Companies box, representing Napoleon’s forces from 1807-1814, who can be painted to represent French, Swiss, Italian, and Neapolitan troops. 40 multipart plastic models are inside the box, and they’re 28mm scale – nominally the same scale as Warhammer minis, but much closer to real world or “truescale” proportions.

While the various flavors of Warhammer are the heart of my hobby, my roots go back to historicals. As a kid, I’d go with my dad to Historicon, the Historical Miniatures Gaming Society’s premiere annual convention. The difference between events like Historicon and Adepticon is that the focus isn’t games where you bring your own armies, but big exhibition games held by clubs and individuals who provide the armies and terrain. One of the games I found myself going back to, year after year, was a fairly simple set of Napoleonics rules: Larry Brom’s Before I was a Marshal, I was a Grenadier, run by a kindly beponytailed dadgamer. Players would get to choose their regiments at the beginning, and the blue uniforms, bright plumes, and masses of muskets that made the Voltiguers (or simply “skirmishers” to my young self) grabbed my attention. In other years I would take highlander regiments or French Imperial Guard, but it was the Voltiguers I kept coming back to. A combination of built up nostalgia and affection for their uniforms had me jumping at the chance to review these minis, and take a dive into historical modeling of my own. 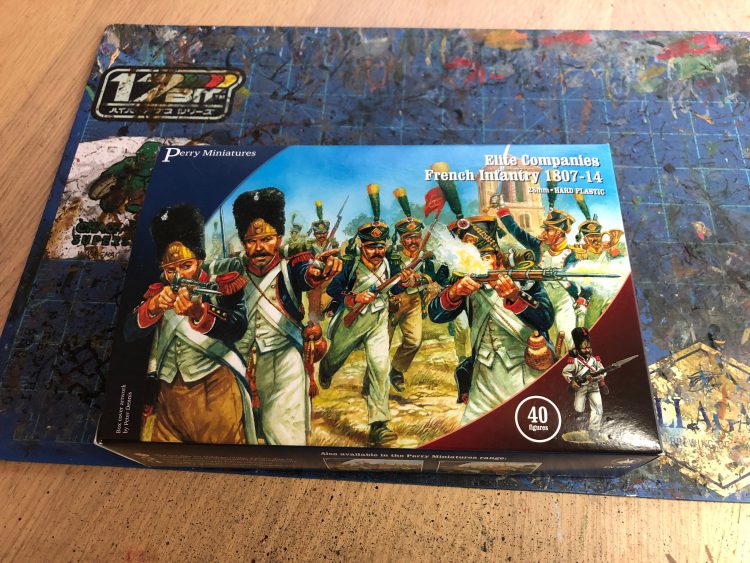 At first glance, the box art, by Peter Dennis, is lovely. It adequately shows the variety of troops inside the box and it’s no surprise that Dennis does art for Osprey Publishing’s wonderful books on military uniforms. The instruction manual isn’t so much a guide to build the models inside, but more a sheet of inspiration for how to paint them. The guide has a ton of paint schemes on offer, as well as a bevvy of banners you can cut out and use for your standard bearers. You’re somewhat on your own with the actual construction of these boys, but it’s not too hard to put anything together. Any head and any backpack can go on any body, and the arms are numbered together on the sprues so you’re not totally in the dark here. Included are sprues for the titular Elite Companies, Battalion, and Command options, and you can mix and match freely to get a pretty bottomless variety of poses. Included head options are one of the things that make the difference between, say, Voltiguers and Grenadiers, so you can fill out whatever types of ranks you want.

The sprues will feel familiar to anyone who has experience with GW models, and while the quality isn’t quite as crisp as GW’s latest offerings, it’s very good. The faces are characterful, details are readable, and the variety of bits let you customize your regiments pretty extensively. I’m a big fan of the little frying pans and cookware you can tack on, they’re a lovely little touch. Flash is minimal and mold lines are almost nonexistant, so cleanup is an easy job. The joins are largely flat edge to flat edge, so you don’t have any guides helping to keep arms straight, but so long as you’re reasonably careful assembly is simple. The only stumbling point I had here was one common to a lot of miniatures with rifles, which is having the supporting arm line up with the one holding the gun. Working with plastic glue I had enough working time to adjust and make sure the joins lined up, but I had a close call or two.

The bases aren’t my favorite, but I used them for consistency while I painted up some test models. They’re very thin, making them a little tricky to pick up, and frustratingly there’s only 32 in the box, leaving 8 soldiers baseless. I understand that for a lot of people these are unnecessary as their models will be mounted on ranked bases instead, but for someone aiming to use these in a skirmish game, model them all skirmishing, or using movement trays, the bases are a little lacking. There are also integrated bases on all the miniatures’ feet which substantially raise them above their base, so modelers will want to find some way to fill in that vertical gap. Personally, I wish their legs weren’t attached to these bases or that the integrated bases were thinner, but I understand the logic. Their boots are realistically proportioned and would likely make for poor contact points because of how thin they are, so having a big block of plastic helps with gluing them down. I personally went in with Citadel Texture Paint and smoothed over this join but green stuff, texture paste, or just filing down the integral base would work too.

Painting these models is an absolute joy. They take to simple layering techniques really nicely, and you can get pretty far with just a base and a wash on much of the model. I painted up my first test model in just a couple of hours using some freely available resources on the uniforms of the 3eme Ligne Voltiguers circa the battle of Teugen-Hausen in 1809, and Citadel paints I had on hand (yes, I realized I basically painted Ultramarines again). The details are sharp enough that I was able to use washes without flooding any details, and distinct enough that layering and highlighting were easy. The faces are a bit tiny for someone as used to GW models as I am, so getting their eyeballs is tricky from a painting perspective, but the details are well defined enough that doing so is just a matter of brush control.

After painting a test model and building a few friends for him, I took to painting a small unit of Voltiguers, with a sergeant to lead them. I found batch painting them to be fairly easy until it came to painting all the buttons, cockades, and other little details of the uniforms. They look even better as a cohesive unit than they do as individual models, and I strongly see the appeal in multibasing them or mounting them on some modeled movement trays.

Coming from a GW-centric place in this hobby, Perry’s offering was a smooth transition into historical gaming miniatures. I don’t know if I would recommend these to first time modelers as the minimal assembly instructions and wealth of bits may leave some newcomers intimidated, but for anyone who has experience building miniatures these will come easily. The price is right at under a dollar per miniature, and the ease of assembly and pose variety makes army building a smooth and fun experience. As of this writing I’m happy to keep painting these dudes when I don’t even have a game in mind, and I don’t think there’s a much higher recommendation I can give than that.