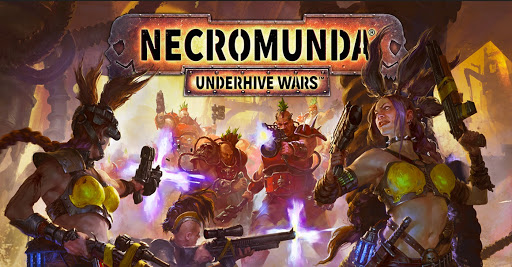 Necromunda: Underhive Wars, developed by Rogue Factor and published by Focus Home Interactive, is a third-person turn-based tactics game in the vein of your XCOM revivals or, well, just about any game that’s a brand with the word Tactics slapped on after it. Players control teams of up to five scavengers-cum-soldiers as they compete against each other to fully loot the decaying wrecks in the undercroft and machineworks of a hideous, toxic Hive World in the Warhammer 40K setting. So far, reaction to the title has been mixed, and…

That reaction is fully deserved. The game is a confusing, plodding, aggravating mess in its current state, and a lot of the issues with it are either fundamental design problems or underlying systems that require massive improvement. Let’s start with the good things, though: generally speaking, it looks pretty nice, and of the many glitches and errors you can run into in your time with the game, none seem centered on graphical fidelity and performance. The aesthetic is very much Cockney Mileenas from Mortal Kombat running around an indoor Mad Max setting, and there’s some appeal to that even if it doesn’t particularly land with me. It’s good to see some human characters centered that aren’t Space Marines or Imperial Guardsmen, and even though the compounding complexity of the game’s subsystems are a detriment to the product on a macro level, there’s a good variety of weapon and loadout choices for your little loot-raiders. When things are working well, and you have a lot of time and patience on your hands, and you’re playing against other humans (presumably; matchmaking wasn’t working for me for some reason, but that might be on my end not the game’s), Underhive Wars can provide a decent enough experience.

You need to have a lot of time though, because the main gameplay experience is slow. This is not actually based off of the tabletop rules for the Games Workshop product by the same name, but it very much feels like that sort of system: extremely granular and complicated in some areas — action point costings, for instance, which instead of the Blue Action/Gold Action system of XCOM: Enemy Unknown is broken down into a bar of Action Points with each separate action costing a bespoke (and occasionally arbitrary-seeming) number of said points, and you’d just better memorize the list while preparing your turn — while being loose and freeform in others, like the movement rules, where you can move without spending your Movement Points at-will on a non-grid surface, unless and until you run into an Overwatch or a trap, in which case whoops, now you just spent it all. Also you can’t end your turn in certain places; if you do the game will pick you up and put you somewhere nearby. There is no formal cover system (because nothing is on a grid), but you can Kneel behind objects to break line of sight. Maybe it’ll work! Maybe it won’t! Maybe the opportunity cost of being able to re-establish line of sight with your character model will just involve the enemy taking two steps to the right! Some stuff isn’t clear.

The developers knew the visual language (and UI) of the game were going to be a bit much, so they put in an on-demand 3D tactical map and visual overlay to help highlight key points of the map and the location of enemy units, but there really is a lot going on. And you see it all happen, every time: since this game is mainly intended for multiplayer gaming and seems to be spoofing the “feel” of a tabletop game, you get to see all enemy units at all times and are forced to watch them take their turns. Even if they’re AI! There doesn’t seem to be a way to speed up or skip this at all. If the enemy wants to run around the map for two minutes before pausing and taking a potshot, you’re buckled in along for the ride with them.

This is where the movement system not being on a grid is a real killer — grids are relatively easy to program AI movement on. There’s no real pathing involved; they move like a chess piece to the designated location and take their action. With a movement system that allows you to move anywhere in a certain radius, suddenly the AI has to make complicated pathing decisions based on level geometry…and the Underhive Wars AI is simply incompetent at moving around the map, both at the tactical and fundamental level. Everyone who has played this game for a couple hours in the single player mode has at least one story; mine involves an AI soldier who was flanked and, instead of re-flanking the attacker from the side, took a zipline down to another level, ran up the stairs to try to get behind the attacker, ran out of movement points, and was stuck dropping into Overwatch with their back exposed to a third unit’s attack. I’ve also seen videos of much less funny and more dire bugs involving AI movement that have it just wig out regardless of board state considerations, including one where the AI gets stuck on terrain and simply runs in place forever, forcing a quit to desktop and relaunch of the game. There’s even been reports of bugs like this wiping campaign progress and save files.

Good — or at least functional — single player AI is necessary in this game, because individual rounds can take upwards of twenty to thirty minutes when things get complicated and the number of pieces in play escalates, and it’s going to be difficult to always find a robust player base willing to sit through that length of play without someone dropping and being replaced by a bot so the rest can finish. In the single player campaign it’s merely amusing (or bemusing, if it crashes the game) when the AI becomes unable to complete basic tasks. But what if you lost an online game after an hour or ninety minutes of play because someone (say, your teammate in a 2v2) dropped and the hapless, witless replacement AI’s mistakes benefited your opponent instead of you?

In the end there are some good ideas here, but they’re brought down by just staggeringly bad implementation and a bad theory of what a compelling multiplayer video game looks like. It plays too slow, and the baseline computer plays too poorly, to make this a recommendation — and neither of those two things seem like stuff that’s going to be easy to buff out in the patches.

A Second Opinion from a Tabletop Player

It’s worth noting that our standard review author (Jonathan Bernhardt) does not play the Necromunda tabletop game. In order to make sure we had a review that was representative of that viewpoint as well, we asked Goonhammer patron Kevin Fowler, an avid Necromunda player and friend of the 40k Badcast, to offer his thoughts on the game:

The stark difference between Necromunda: Underhive Wars and tabletop is that I managed to make it three rounds without falling off a walkway – while on fire. I’m enjoying my time with Underhive Wars, but it will break your heart if you pick it up expecting a replica of the tabletop experience. Aside from having to adapt to initiative and the “advance, shoot, retreat” format of activations, the AI does multiple things that generally add up to pre-measuring and ignoring target priority. These game-y bits can pile up, especially as certain missions drag on.