This week we’re going to take a look at some loot casket house rules cooked up by Dylan and Cody. Looking for some side objectives to spice up your games? Interested in finding new and exciting ways for your gangers to mess themselves up with drugs? Want to learn more about the wonder that is Fancy Hat? You are in the right place, dear reader.

Cody: I feel like this all started the same way everything starts when Dylan and I discuss a Necro rule in detail: I’m confused about the purpose, Dylan thinks it’s boring. So we brainstorm a way to make it more interesting and have a real, functional purpose. For loot caskets, we wondered what their purpose was beyond occasional mission objectives. Then we thought they could be way more narrative and exciting and random than just negligible creds, an ammo cache, or a frag trap. They should be way more enticing for our gangers to go after!

Dylan: Seriously. I just want to make Necromunda more like an RPG despite the complexity I know it would create. Downtime jobs, side jobs, etc.

Cody: The idea we had for adjusting the opening of a loot crate was rooted heavily in the imagery and narrative of Necromunda. A gang full of malnourished child soldiers, pinned down in a vicious firefight, haphazardly digging around the trash heaps of the Underhive… looking for something to help them out. You never know what you’re gonna get and we wanted to make it more momentous! You might find a handful of creds, maybe a half used syringe full of mystery drugs, or maybe even something pretty valuable!

Dylan: I was bemoaning the fact that it felt like loot crates were never worth trying to open. We started talking about it and thought about all the things you might find in a random crate and then how to make it work in game.

Cody: Trying to build on the existing rules, we thought about what kind of rules might best represent a Necromunda loot casket. I’m personally fond of cascading randomized charts to imitate the sheer randomness of chance. And I think Dylan has a fondness for this sort of chart/subchart rolling because… well, because he loves 2nd Edition Warhammer 40k!  And we’re both proponents of “no-feel-bad” rules as well as “Medium reward, medium to low risk” rules. So we rebuilt the slightly boring, somewhat meaningless, three-outcome loot casket into a five-outcome chart that has three subcharts. That’s right, baby: grab your d12!

Dylan: I do love 2nd ed. Not playing it, but the idea of it. Cards, chits, tokens, and different dice.

Cody: Also, keep in mind that loot caskets are a bit hard to get into. Not only do you have to send your ganger into most likely a dangerous position, but you also need to spend an action and pass a characteristic check. It’s not a foregone conclusion!  So we felt that there should be a greater reward than blowing up, creds barely worth noting, or a lackluster ammo cache. 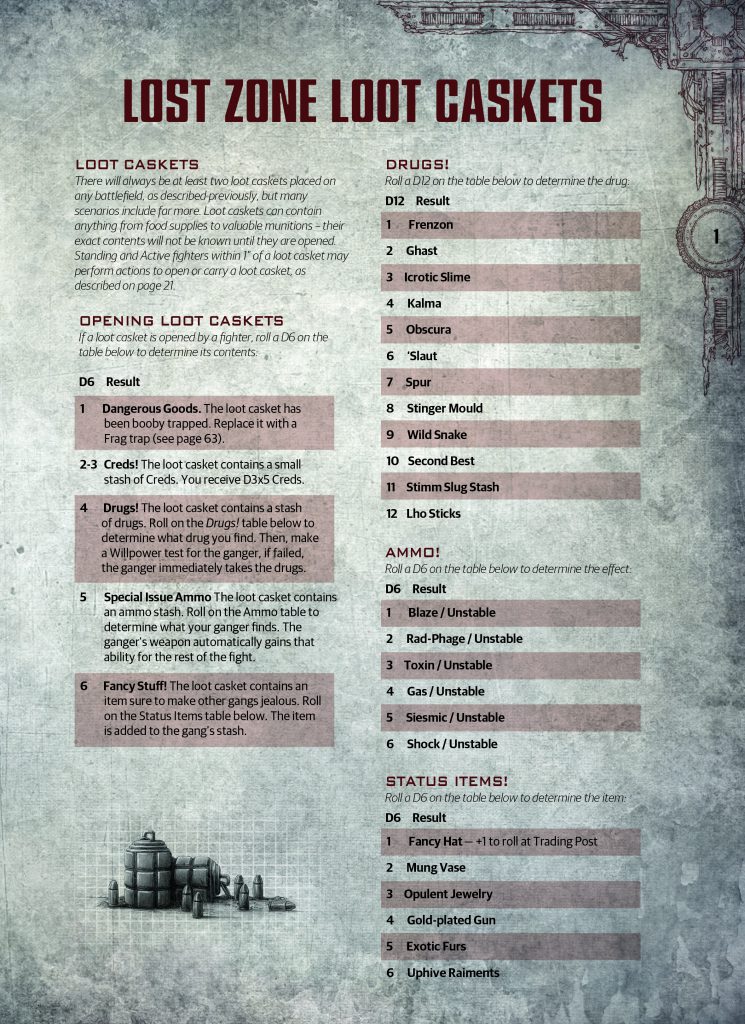 Cody: We kept the frag trap, because it’s Necro. There always has to be a chance of something going horribly wrong.

Dylan: It’s a Frag trap!! Gotta have a chance of death for everything your gangers do.

Cody: The original d6 creds on the standard chart was a real big waste of time. It took more effort to write down that I got 2 creds than they were actually worth.  D3x5 creds… now that’s worth raising an eyebrow over.  A 66% chance to get enough creds for an autopistol? A 33% chance to get enough creds for a lasgun? That actually means something. Not anything to break the game, but it makes it kind of worth your gangers’ time to run over to that casket.

Dylan: Cash is king. A bit boring but never unwanted.

Cody: Oh, the chems! Wanting to see more drug use in Necro, we added a chems subchart into the Loot Casket chart. But Dylan had the brilliant idea to attach a Willpower test to see if the ganger finding the chems greedily shoots up mid-combat or not. If they don’t, you get a free chem in your stash: neat and flavorful! If they do succumb to their need to numb themselves to the hellish environment they live in, you get a ganger who could potentially become a beast or pee their pants in psychedelic paranoia. Super apropos for Necro. Thinking back, we realized we should add Wild Snake, Second Best, and Lho Sticks to the chart. So those are in there now.

Dylan: Who doesn’t want to end up with a ganger addicted to Obscura? Including ALL the drugs including some more pedestrian selections is very fun.

Cody: One of my favorite examples of this chart in full effect is when one of my Orlock gangers kicked open a loot casket, found some Ghast, immediately took it, went insane, ran away, then somehow snapped out of it and proceeded to shoot up a hostile ganger, putting them out of action. It was a real rollercoaster of emotions! All because of our silly chart!

Dylan: I live for this dumb stuff.

Cody: Getting fancy ammo mid battle is pretty darn good! Especially because we wanted to keep things simple and broad. If we used actual special ammo from the trading post, there were going to be more instances of your autogunner getting ammo they couldn’t use. And that’s no fun. So we grabbed six weapon traits and called them Special Issue Ammo. But potentially giving an autogun the Blaze rule is really, really good. To counter any potential power issues we gave these ammo choices Unstable! You gotta choose. Do you feel lucky? Punk?

Cody: We wanted to include Status Items to represent hidden treasures and also to include a somewhat ignored set of items.  Some of the bonuses are decent, but not worth spending the creds. So we thought: what if they were free?  Suddenly, the status items are pretty darn good! Also, super fun and fluffy! To make the chart a d6, we created a Status Item to add to the five existing ones from the core rules (excluding master crafted weapons and servo-skulls): A Fancy Hat!  There’s something strangely satisfying about one of your gangers going dumpster diving and coming up with a pretty spiffy hat!

Dylan: I think the +1 granted by the Fancy Hat can be used against the rarity rating of the items you ‘re seeking in the trading post. 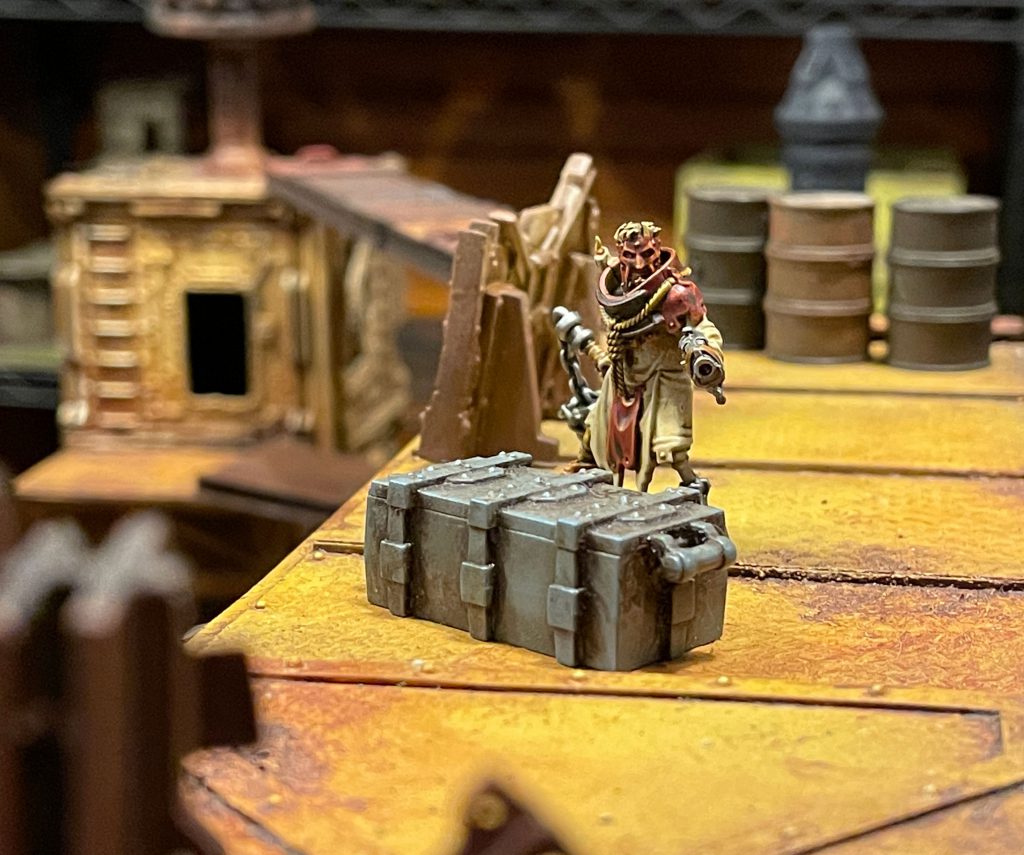 Cody: One of the things I really enjoy about our charts is how it upends the conventional “1 is bad and 6 is good” dichotomy of Necro. Sure we play into it with our primary chart with the frag trap being on 1. But the subcharts all have a really good result on the 1 and a mediocre result on the 6. The charts keep you off balance so that you generally forget what’s good and what’s bad. Which really feeds into the suspense you feel when rolling to see what is going to happen next!

Dylan: As Cody said, this isn’t game changing, but it changes the way you play part of the game. You have something else you can do with a ganger and the reward can range from good-to-bad-to-hilarious. Anything that gets both people excited to see what happens with a dice roll is a good time. I can’t recommend using these rules enough.

Cody: Definitely. These are some of my favorite house rules that Dylan and I cooked up! Give ‘em a try, y’all! Make loot caskets a meaningful and dramatic side quest for your gangers!

And that’s it! Are you excited to get more out of loot caskets? Any ideas for other goodies a ganger could stumble upon? Just excited about Fancy Hat? Drop us a line at contact@goonhammer.com.