Rank, Flank and Fire: A Song of Ice and Fire Miniatures Game 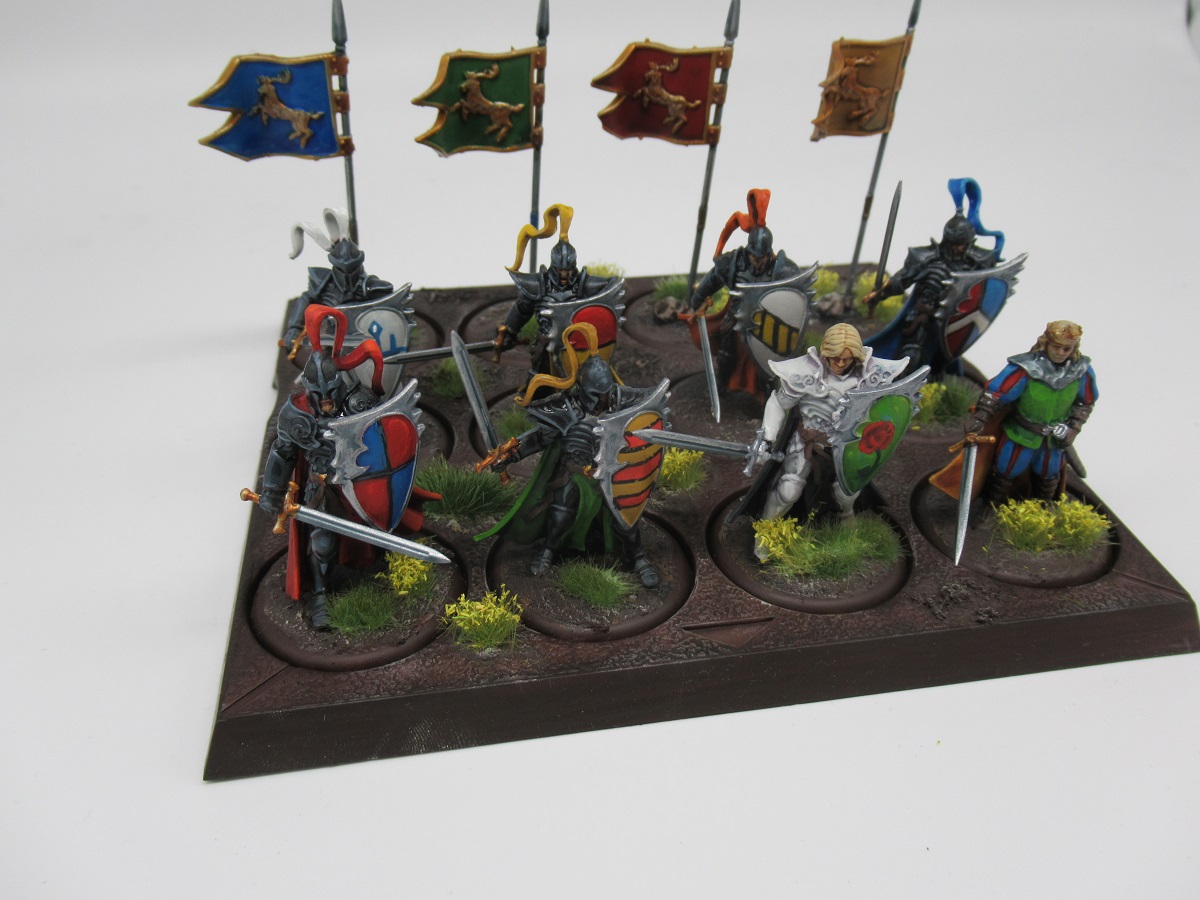 Remember for a moment that Game of Thrones was five seasons of the best television ever produced.

A Song of Ice and Fire Miniatures is an amazing miniatures game, marketed abysmally. When I bought in, I did so entirely at random, based on no word of mouth and minimal support from the official website. What I wanted was a cheap painting project and what I got was one of the best rank-and-flank games that I’ve ever encountered. A few demo games later and much of my local gaming circle was buying in. With how excellent this game is I thought it deserves better copy and summary of how it works and what makes it good than the official website’s cagey handling of information and nonexistent photography.

(For what it’s worth, this is not the only company to be coy with photography of their miniatures. I don’t understand! Why on earth would you ever not provide multiple high resolution photographs from a variety of angles like Games Workshop does? Why on earth would you not show a picture of this sculpture that you are selling? It’s literally your only job!)

What’s In The Box? 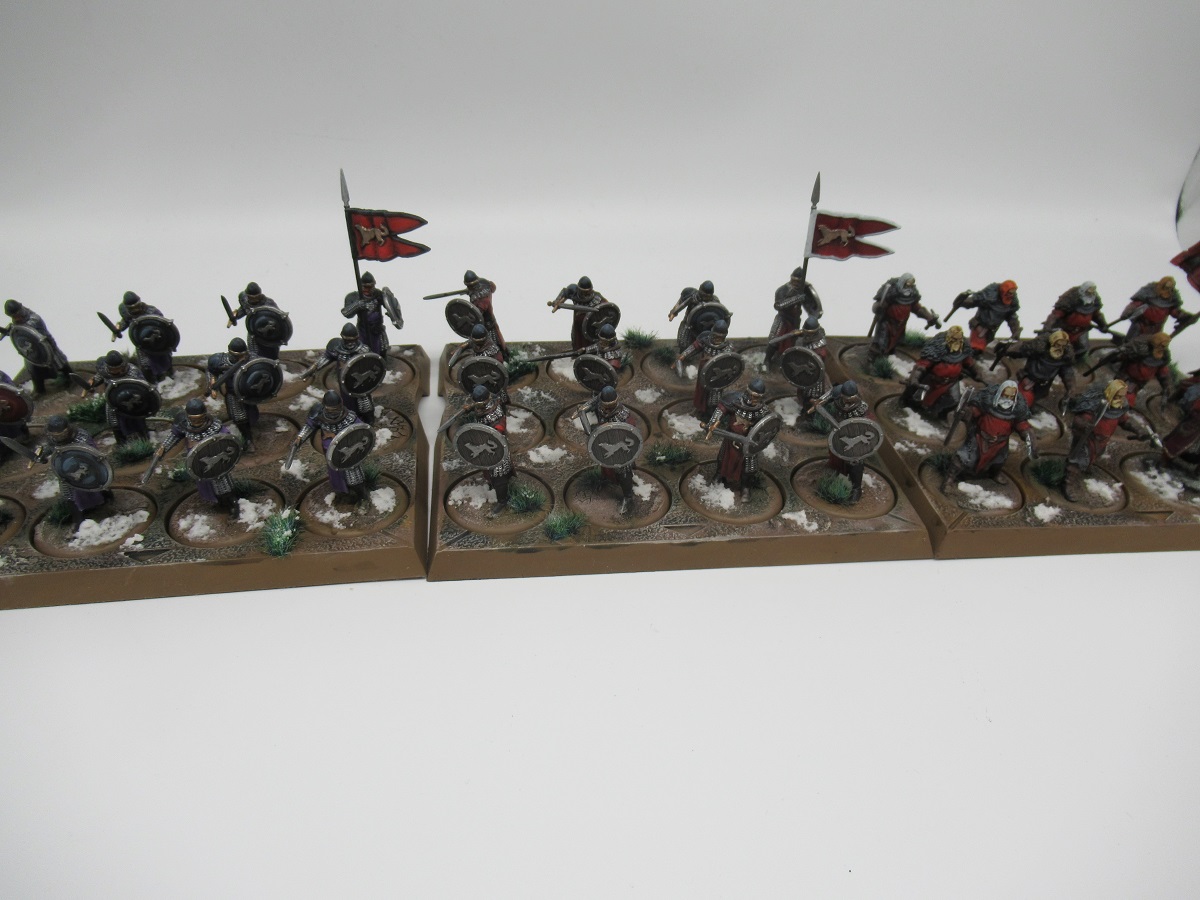 It took far too much effort to find out what was actually in these starter boxes. Here’s the actual summary of contents:

On the subject of miniatures, you get: 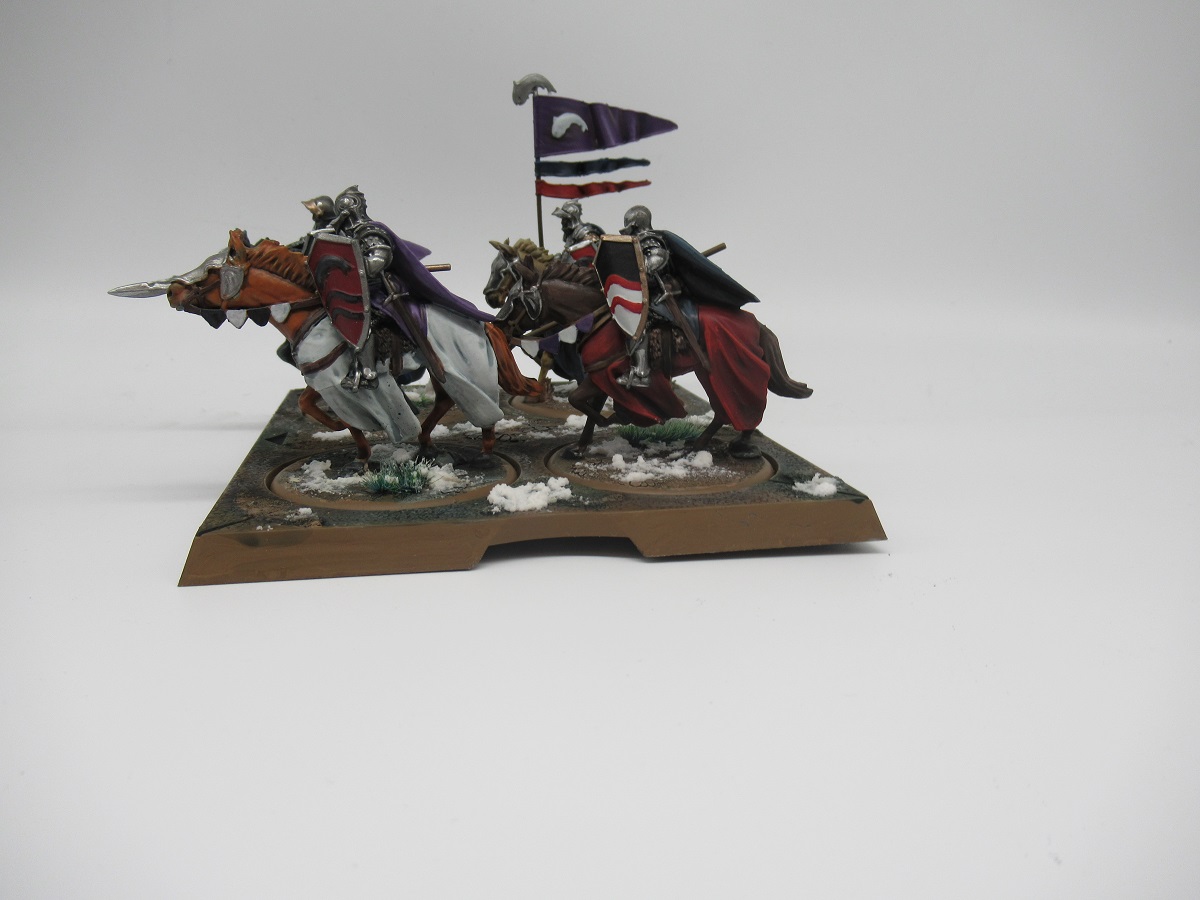 Scale-wise, these miniatures are 28mm scale – they wouldn’t look out of place next to a Warhammer or Warmachine miniature. They’re also generally pretty good quality! There’s a lot of personality in the sculpts, and the hero and NCU characters tend to be amazing designs. They’re also blessedly free from the endless dangly bits and gemstones and trim that overwhelm GW designs, making painting large units of these shockingly quick while often giving large flat surfaces for skilled painters to flex on. Everyone I’ve spoken to who’s bought in has expressed surprise at how good these miniatures are. They also come in coloured plastic matching the faction.

This means in a typical starter box, you’ll have around 50 miniatures plus assorted extras. That’s a good deal! The two-player Lannister vs Stark starter runs $200 Australian with two factions, putting it at about $2 per miniature. The Heroes/Attachment boxes contain around 8 unique characters, usually providing a great variety of quality sculpts for the cost of a single GW blister. Given that you’ll only need to add 2-3 extra boxes (each containing a single infantry or cavalry unit) to flesh out to a real army you can get a completely functional army for $300 Australian. That’s an extremely reasonable price for a rank and flank miniatures game. It’s also a reasonable amount of painting for the genre – units of twelve are much more forgiving than painting, say, an enormous blob of clanrats or batch painting 120 ork boys. 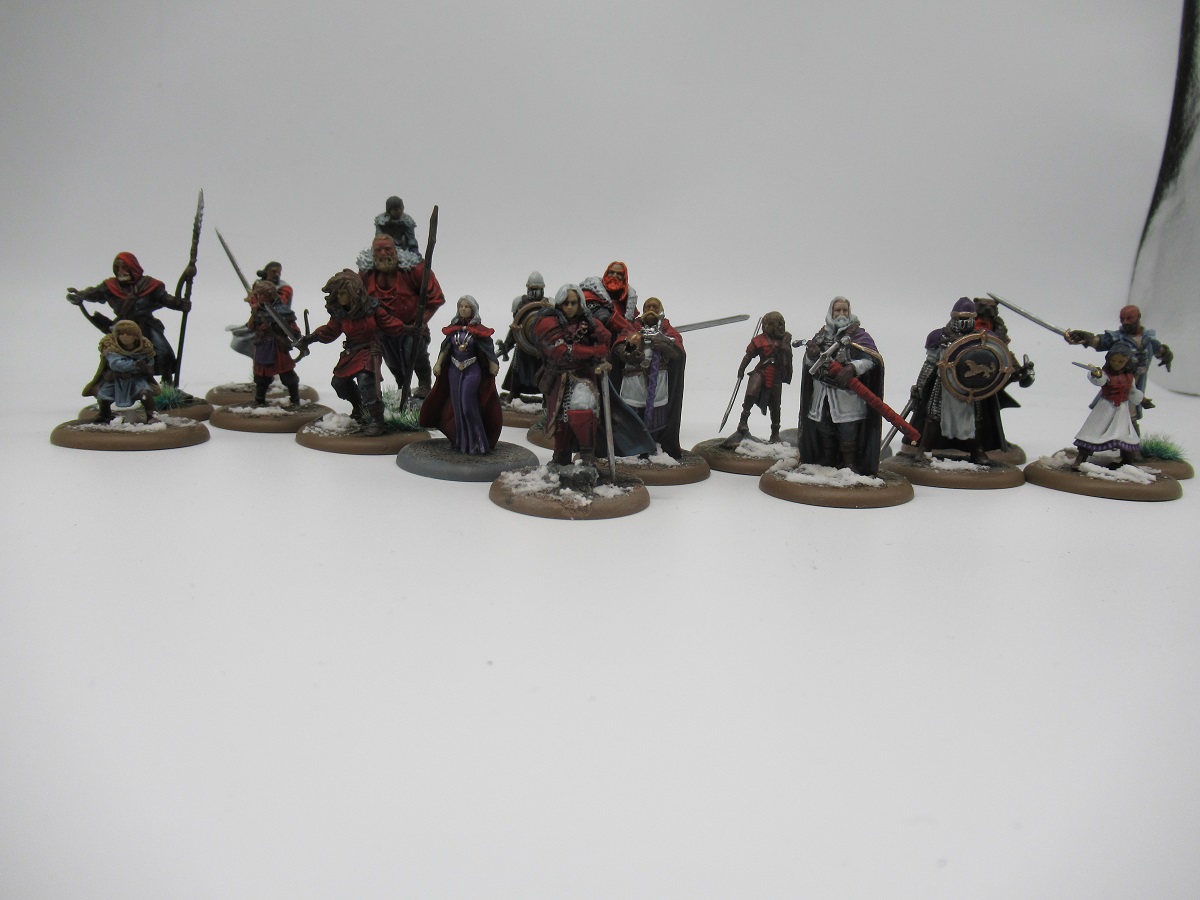 Just as frustratingly as the SOIAF’s game’s refusal to publish photographs of their miniatures on their websites, so have they failed utterly to promote or even gesture towards their extremely good free rules app, War Council. Seriously, search for the app on the website and you’ll find a link to a blog post from 2018 and that’s it.

So War Council is a peer to the extremely well renowned (and much better promoted) Infinity Army App. Firstly, it is free. It provides a listbuilding feature with full unit mechanics, rulebook, missions and scenarios, as well as the complete rules in one easy place. Every unit and tactics card is available, letting you browse through the full mechanics of every faction.

Note that currently the most recent rules update is still a beta that you must opt into in the app store, it’s strongly recommended you do this. 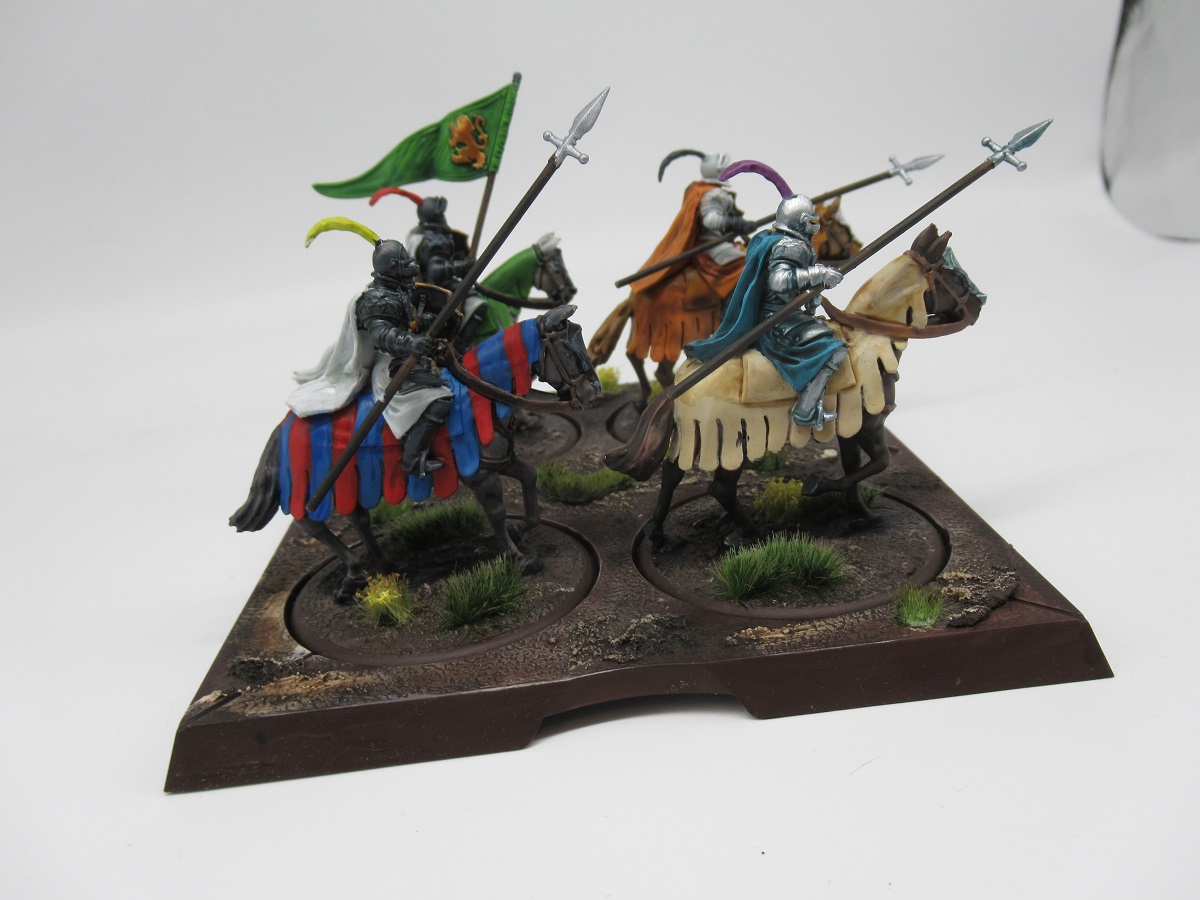 I’ve rarely had as much fun as I have with a strategy game as this. The core objective is extremely simple – slam your rectangle into the flank or rear of the enemy’s rectangle for Massive Damage. There is a significant amount of complexity below the surface but all of that complexity is ultimately in service to that simple objective. It keeps the game extremely movement and positionally focused.

The game is uses Alternating Activations. This keeps both players engaged throughout each turn and means that playing can be something like a game of chicken – moving units to tempt charges, force counter-manouvres, or outflank an opponent. Each turn is a complicated puzzle because often multiple units will be positioned to charge each other and not all of them will be able to go off.

It also uses Tactics Cards – a deck comprised of both your commander’s unique cards and your faction’s base deck. Some commanders who are focused on personal prowess will have cards that buff their own unit to the exclusion of others, others with more strategic minds will have more general purpose cards. These cards have powerful effects, such as free movement, stronger charges, counterattacks, reinforcements and so on. You’ll have three cards to use each round giving you an opportunity to create a critical opportunity.

The other unique feature is the NCUs – the ‘magic system’. Aside from the main board is a special Tactics Board with five zones. When a NCU claims a zone then they can create a unique effect – for example, claiming the purse represents your politician’s manouvring to ensure your forces are well supplied, allowing you to restore wounds to a damaged unit. Claiming a zone blocks your opponent from claiming it, making the political fencing and countermoves as much a part of the battle as the movement of armies.

The combination of this is that each play potentially feels big. Setting up a key cavalry flank charge buffed by a powerful tactics card can absolutely maul an enemy unit in a way that feels profoundly satisfying.

House Stark will drag both sides to the bottom and win with experience.

The Starks have a very strong berserker theme, with troops gaining prowess the worse they’re hurt. Most factions degrade and weaken as the battle goes on, the Starks become stronger and stronger – a trapped animal is the most dangerous. 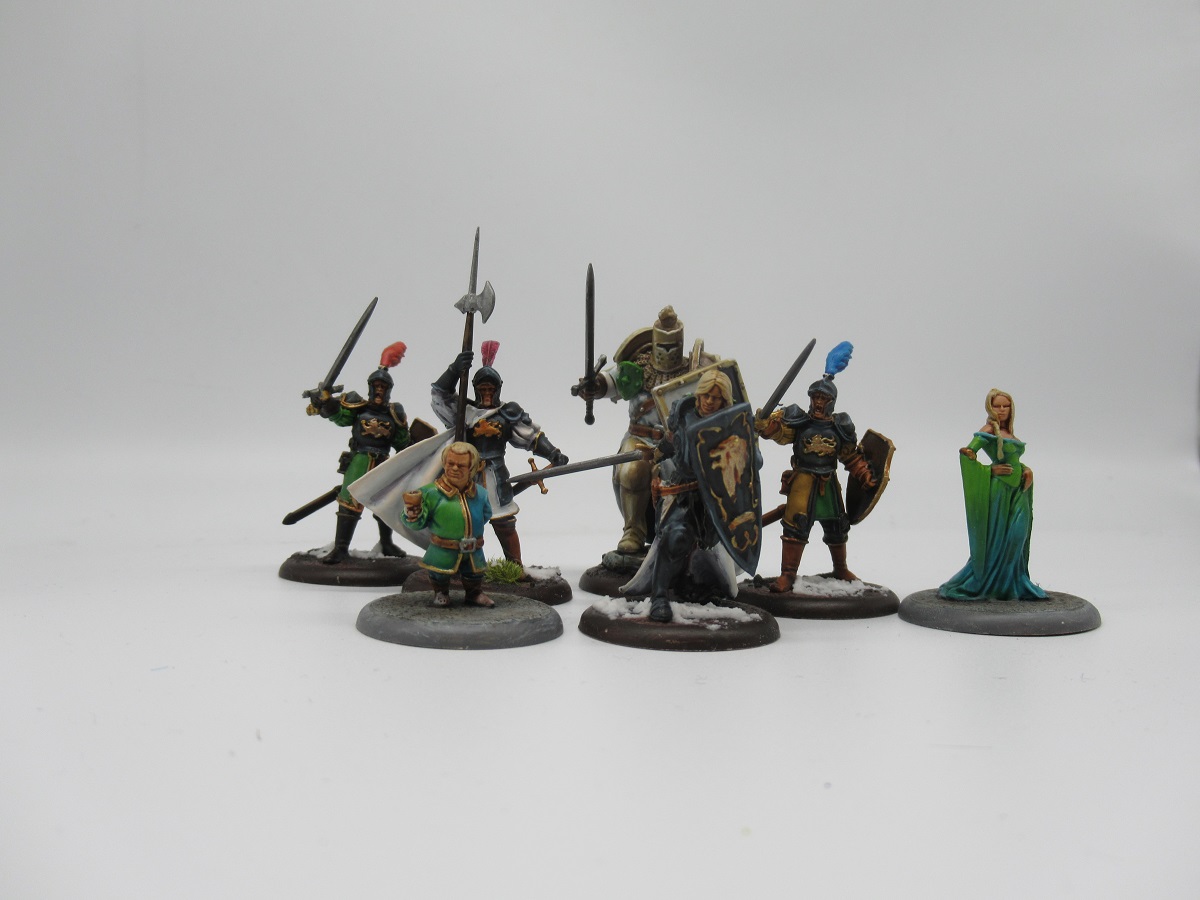 House Lannister seeks to win without fighting. Their gameplay focuses on morale and shutdown play – intimidating the opponent off the table with their perfect gear and political positioning. They play an attritional game, defeating the opponent with small cuts and strong counterplay to shut down their opponent’s key tactics.

House Targaryen is elite in every direction. It has the most elite infantry, the most elite cavalry, the most elite monsters in the dragons – but where it struggles is weaving these contradictory forces into a single cohesive army. The coalition force is united by an underpinning theme of strength and mobility – crushing and overwhelming the enemy, and following through on their victories..

House Baratheon is slow, heavily armoured, and vengeful – their way is to absorb the enemy’s attack and punish them for daring to even try. They have an internal split between those loyal to Renley, who with the support of Highgarden have a theme of healing and restoration, and those loyal to Stannis who wield fire, terror and dark magic.

Pirates and plunderers, House Greyjoy gains strength by stealing resources from their foes. Shockingly mediocre in gear and training, if House Greyjoy is able to overwhelm an enemy unit then they can use the resources they steal to push harder and harder at those that survive. Almost a vampiric playstyle.

They fight like dwarves – stubborn, elite, infantry-based backed by extremely powerful ranged units including the only access to long range war machines in the game. Their tactics cards, rather than being one-off buffs, are vows that give the unit a smaller bonus for the entire game.

Individually each Free Folk soldier is vastly weaker than the well armed and equipped southerners. They make up for this deficiency with tactics, co-ordination, numbers and monsters. Free Folk rely heavily on harassment, status effects, and massive hammer monsters like giants or mammoths.

The game was good enough on its merits for me to convince a number of local players to buy into it after a few demo games. I don’t know about the tournament scene or metagame for this wargame – and honestly, I’m new to rank and flank games in general, and there aren’t any more experienced local players to take wisdom from. In the subsequent articles I won’t be speaking authoritatively and definitively like I do with Infinity where I have enough tournament wins under my belt to be able to speak declarative about what works and what doesn’t. Instead, this article sequence will be written from an exploratory perspective. How does one come to grips with a fascinating new system and develop strategy in a void of context? How do you learn to play a new game when you’ve got no one to learn from?