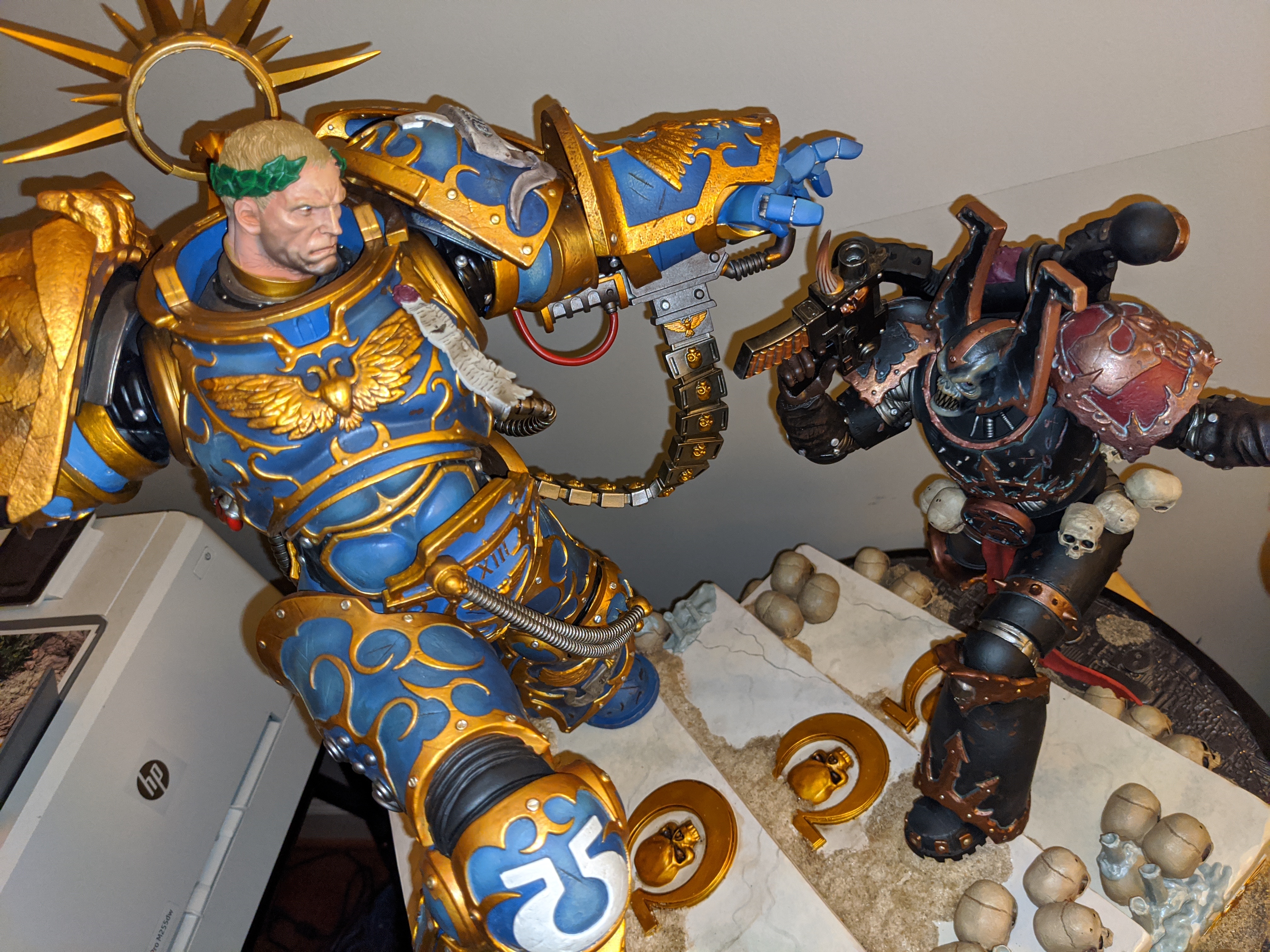 I came to Warhammer in 2015, as a result of a friend posting a random Warhammer meme in a group chat. I then spent a great deal of my free time reading the heck out of the lore, via Lexicanum, and soon branched out into the novels. However, as Warhammer 40,000 is an absolutely enormous franchise, I concluded that I needed to focus my interest. That interest focused on the Primarch of the Thirteenth Legion, the noble Ultramarines, Roboute Guilliman. Like the rest of his Primarch brothers, Guilliman was a Mary Sue – but he was the Mary Sue of political statesmanship and organizing. Sure, he was a great warrior and general, but he had more fun and passion actually running an interstellar empire. I thought he was great. When Games Workshop inadvertantly leaked that Guilliman was coming to save the Imperium in early 2017, I knew it was time to enter the hobby and build an army.

In August of 2017, Games Workshop and a Singapore collectibles company, Hand-Made-Objects, announced that they would be producing a series of “1/6 scale epic dioramas”. The announcement implied that Guilliman was going to be the first diorama released. As a collector of action figures, I was quite intrigued by this. HMO was a company that made absolutely awesome-looking anime and video game statues, but they were pricey. Still, it was Guilliman and I like Guilliman. This statue would be one of Guilliman just after his resurrection as detailed in “Rise of the Primarch”, in which he cut a Black Legion Khorne Berzerker in two after coming out of Cawl’s magic box. When they finally announced the pre-order for Guilliman in November of 2018, I decided to take the plunge. I figured that it would look fantastic on my desk in my office. It was set for a release in Q4 of 2019.

After 2019 came and went without and Guilliman statue, I would check in on HMO’s website every so often – I had laid out a fair amount of money for this thing, after all. But it did appear HMO was actually making the thing, it just took awhile. And then, of course, March of 2020 brought with it the coronavirus pandemic. In late May of 2020, HMO announced that the Guilliman statutes were nearing completion, but there was a slight catch. Owing to the pandemic-induced reduction in shipping traffic between Asia and North America, HMO wanted to send the model through sea freight. It was then when I looked at the shipping charges that I begun to realize I had misjudged the size of the model.

Then the day came when I received a notice from my Condo’s front desk that I had a package. Eagerly anticipating a package from Target with my superglue (hey, hobbyist gotta hobby), I went downstairs. As soon as I stepped off of the elevator, I saw it. An enormous box with the Warhammer 40K Logo and the HMO Logo on it. It had arrived. 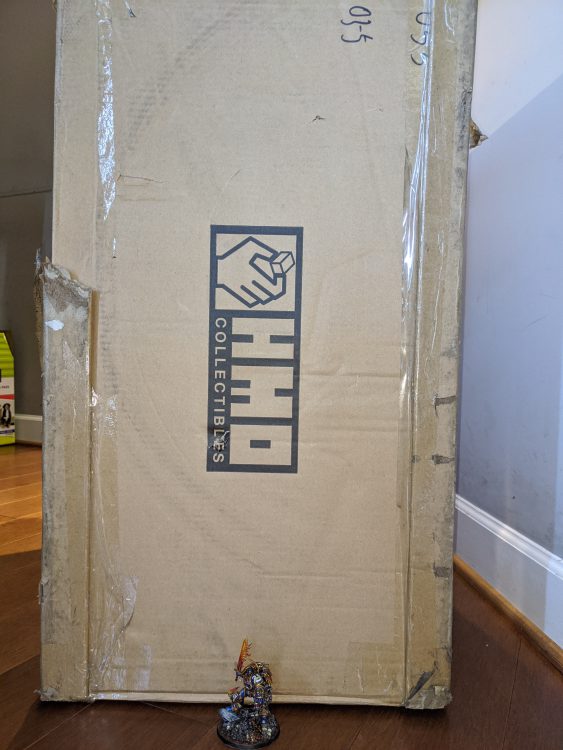 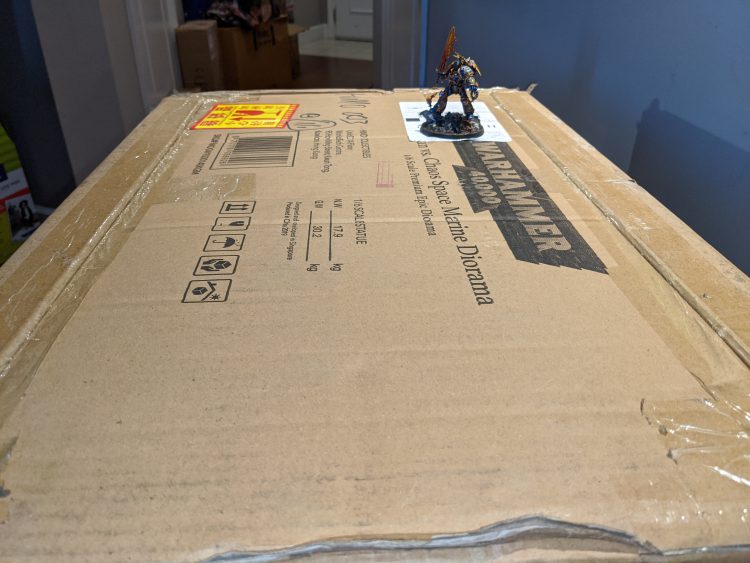 As this box weighed over 65 pounds and was three feet by two feet, I had to push this box to the elevator and into my unit. After putting my mask away, washing my hands, and finishing up work, it was time to open the box. 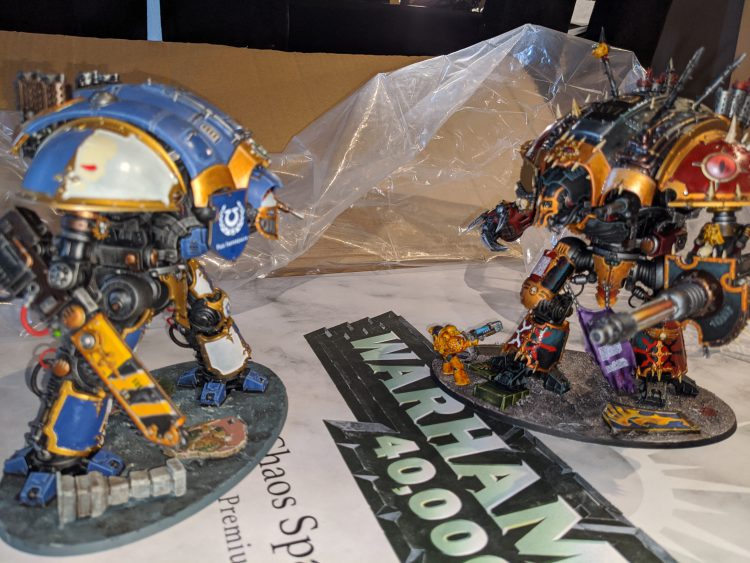 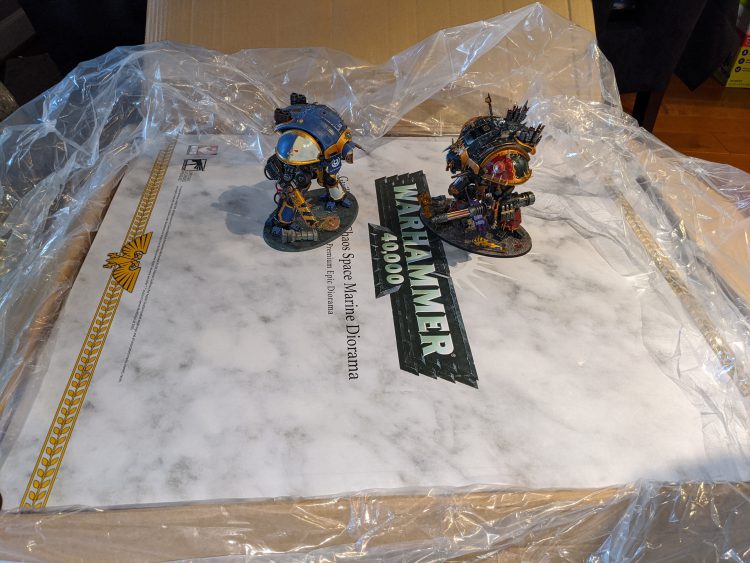 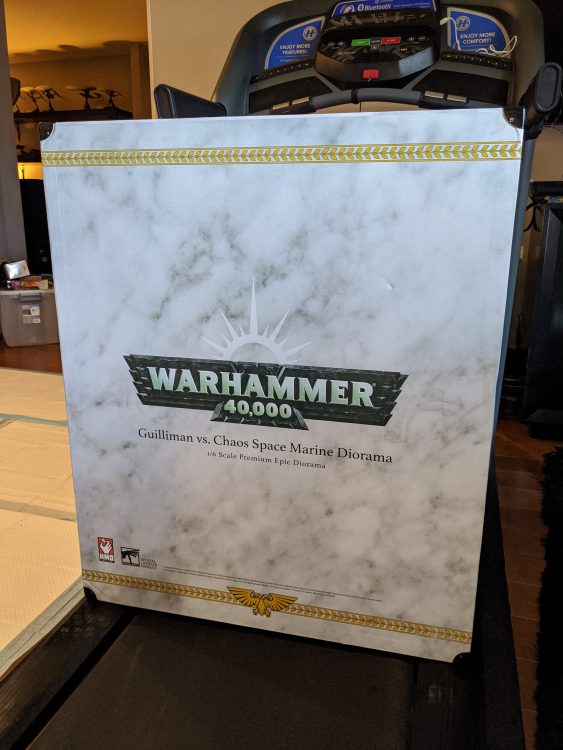 It took me about ten minutes, but I was finally able to remove enough of the shipping container to actually open the box. Inside the box was an instruction booklet and two styrofoam trays, each cradling the several parts that made up the statue. 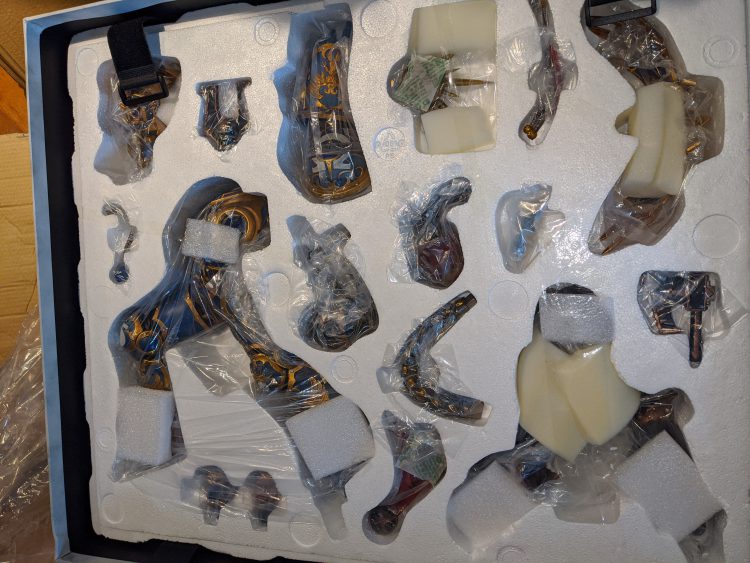 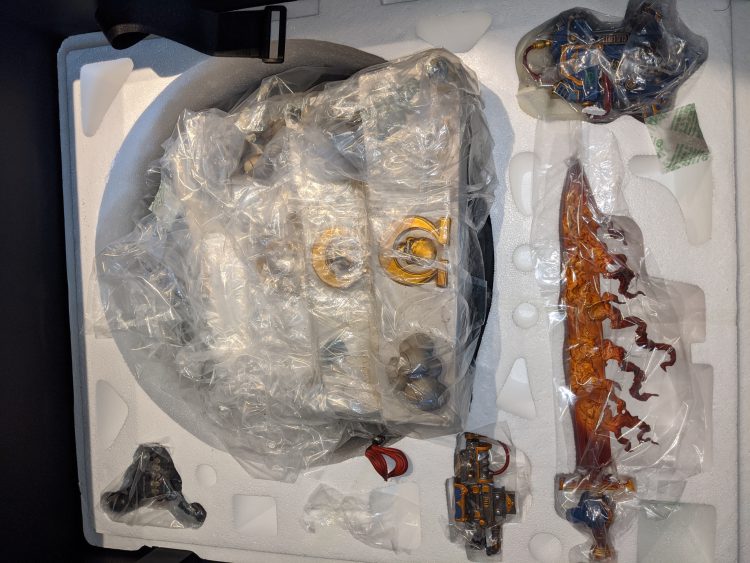 The packaging for this statue, as big and bulky as it was, had kept the model’s parts safe as it crossed the Pacific Ocean and the North American continent. It was surprisingly easy to take out all the parts once the shipping package had been removed, and left less of a mess than most large boxes I have owned.

PACKAGING RATING: 9/10. I have no idea where I’m going to put the box.

After getting it out of the box, it was time for assembly. After figuring out where to put the statue (somewhere where I could see it, and with a two and a half foot clearance from base to sword tip), I set about assembling it. 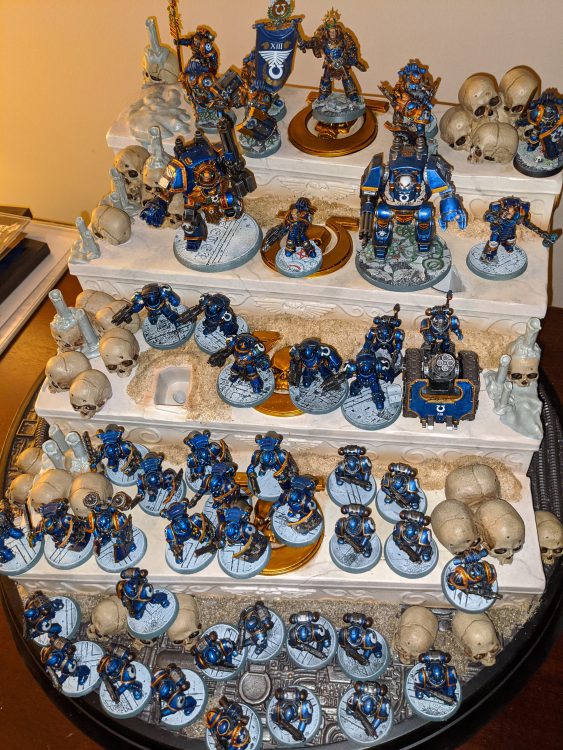 The base itself is wonderfully painted and wonderfully Warhammer. It features a marble staircase emblazoned with Ultimas, Aquillas, and Skulls, all sitting over creepy, Borg-looking machinery. There are also expended candles having dribbled all over steps. There’s also a bit of sand, not all of which actually stuck to the base. When pulling the base out of the box, there was a fair amount of sand that fell back into the box. I also note that the base is a sloping circular base with a black rim – pretty much perfect.

BASE SCULPT AND PAINT: 8.5/10. I’m not certain that the Borg aesthetic is really a good 40K aesthetic, but it still looks nice. The sand falling away from the base is kind of irritating.

Assembling Guilliman and the Chaos Marine took roughly an hour, and I followed the included instruction manual. Like the rest of the model, these are big pieces of poly-resin. 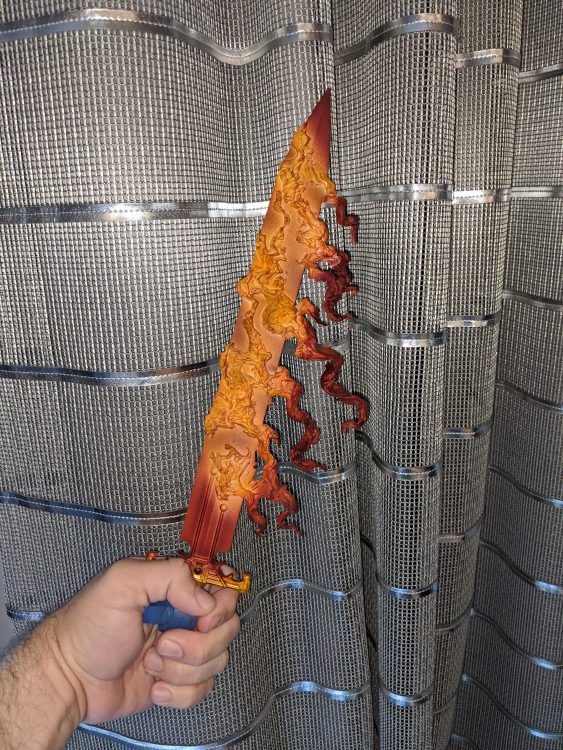 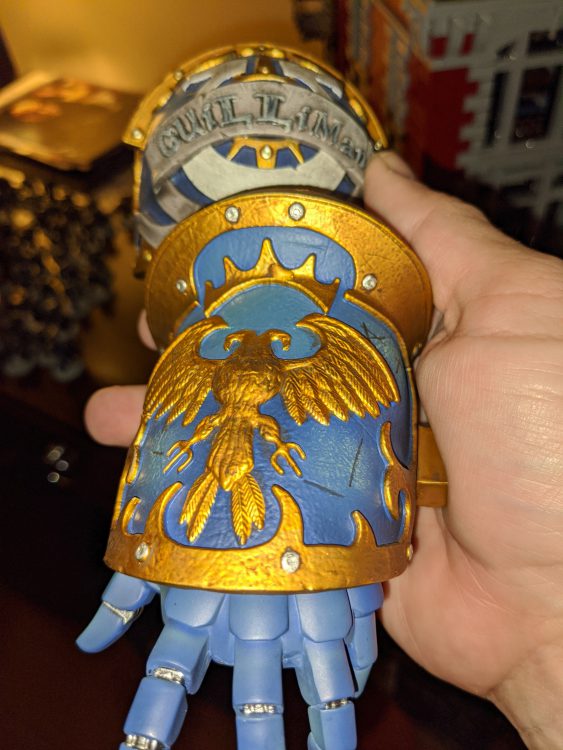 For the most part though, assembly is surprisingly easy and took me about an hour. While big pieces of polystone, the fit between the parts is exquisite, and there are embedded magnets to help the statue stay together and support its weight. The only real trouble I had assembling Guilliman was putting the ammo feed of the Hand of Dominion into the backpack. The slot is either angled strangely or too small, and I had trouble fitting the feed in. Otherwise, the statue was straightforward. Likewise, assembling the Chaos Marine was not difficult either. It has fewer parts and (mostly) less complicated than Big Bob, and so was an easy afterthought.

The one problem I had with the Chaos Marine was that he came with several chains that allegedly wrap around the gun, the axe, and the Marine. However, the instruction booklet does not provide any indication where or how they attach to the model. Furthermore, the instruction booklet displays the model against a black backdrop. So when you have dark metal chains against a Black Legion Marine against a black background, it’s impossible to figure out where to put them on. That was exceptionally frustrating, so I left the chains off.

ASSEMBLY: 7/10. The issues with the chain and ammo feed slot were annoying. The instruction manual also is silent as to where to put all the purity seals. Sure, I had a 40K Guilliman model to guide me, but considering the expense of this statue I expected a bit more guidance. 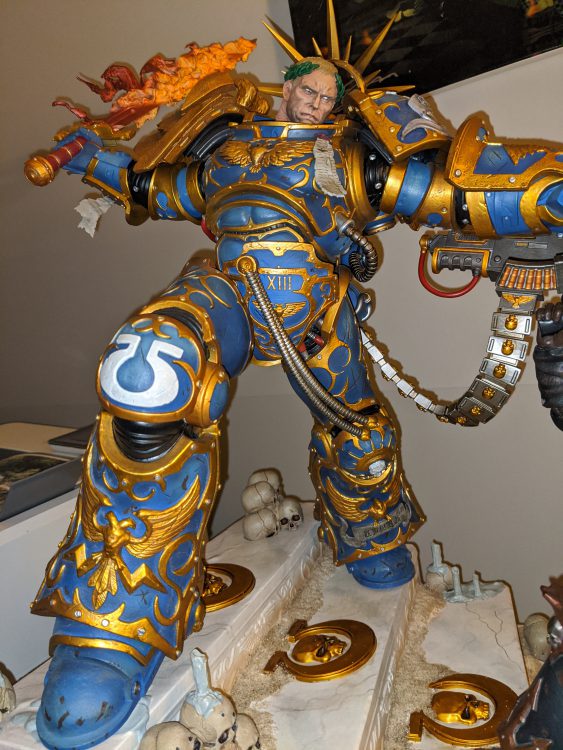 HMO’s statue is of the revived Warhammer 40K version of Guilliman, so that means the giant Armor of Fate versus the more proprotional 30K Armor of Reason. However, HMO’s take is nowhere near as exaggerated as the 40K Guilliman miniature. While he still has gigantic paldrouns, they do not overwhelm his arms the way the miniature’s paldrouns do. They are a bit smaller, allowing the viewer to see Guilliman’s upper arms. Likewise, the statue’s backpack does not jut out as far as the miniature’s backpack juts, and has a much smaller eagle. The statue also gives the eagle’s wings feathers. Guillimans’ crotch is also a bit bigger on the statue versus the miniature (1), which helps correct the rather wonky proportions of the miniature. The end result is that Guilliman in the Armour of Fate looks pretty damn good. 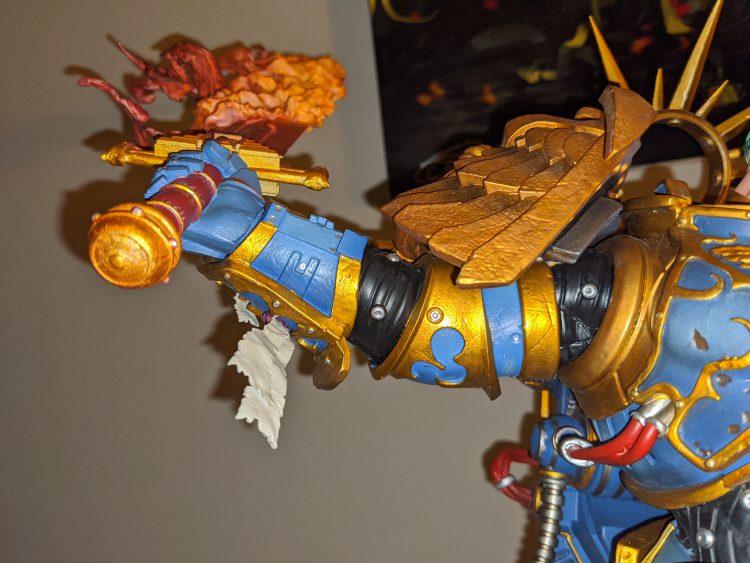 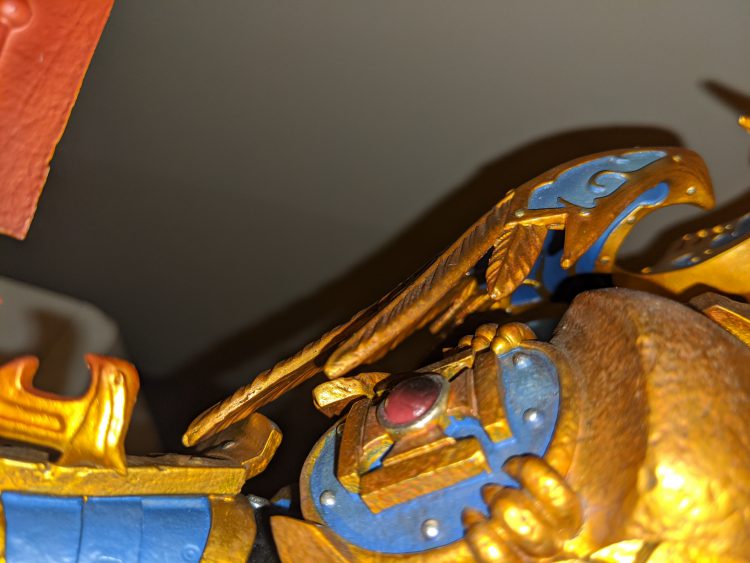 Paintwise, the model is very very well-painted. The blues and the golds show a pretty good degree of color depth, helping to make the sculpt pop. The color is that of a “canon” Guilliman, so…blues and golds. However, the statue does not seem to want to go the extra mile to make certain parts of the sculpt stand out. For example, the soles of Guilliman’s boots are the same blue as his armor. This makes him look like he’s wearing booties, rather than legendarily armoured gilt. I have to admit some disappointment with the Sword of the Emperor, as the finished production model seems to go for a dark red-to dark orange blend for the flames, rather than a dark red-to-bright yellow that I tend to paint on my Guilliman miniatures. The leads of the power sword are unpainted as well, which was disappointing.

The purity seals also leave something to be desired at this scale and price point. The purity seals do not have written words on them, but instead have squiggly lines. This is something that makes sense for a 3 inch miniature, but is less welcome on an two foot tall statue. Also, while I think they were trying to go for a Gothic-looking aquila, they instead put Batman on the purity seal 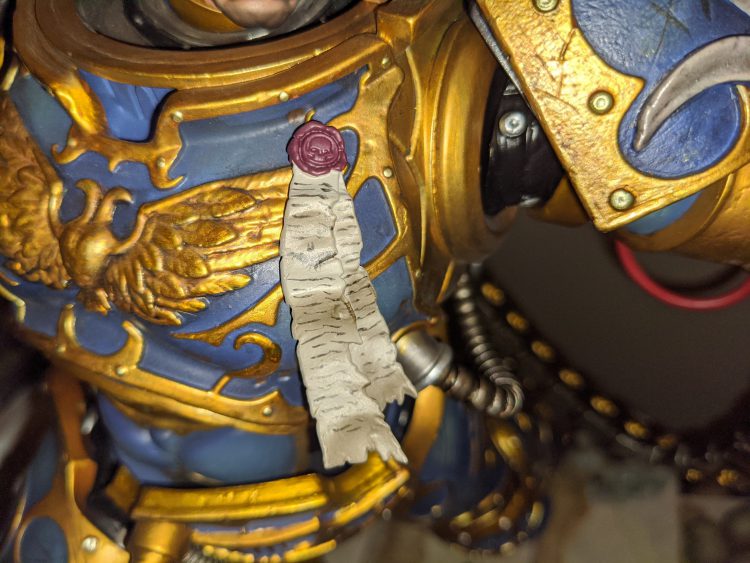 Guilliman’s face has a fantastic paint job and a somewhat intriguing sculpt. Guilliman’s hair is a bit flatter against his head than it is in his miniature or in Black Library’s artwork, giving the impression that he’s had a day of hard fighting. His chin also has more than a hint of a five o’clock shadow, capturing his exhaustion. His eyes are pointing towards to the Chaos Space Marine that he is fighting. 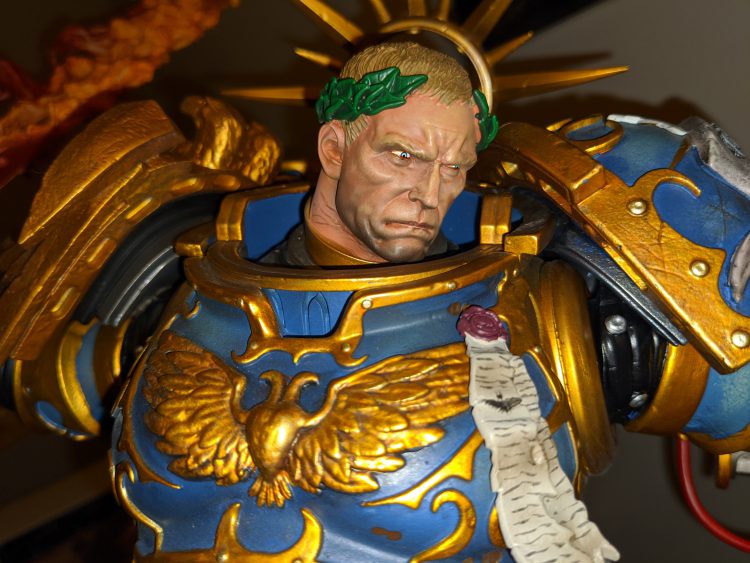 The model also comes with a helmeted head, but that just makes him look like a huge regular Space Marine and not Guilliman. 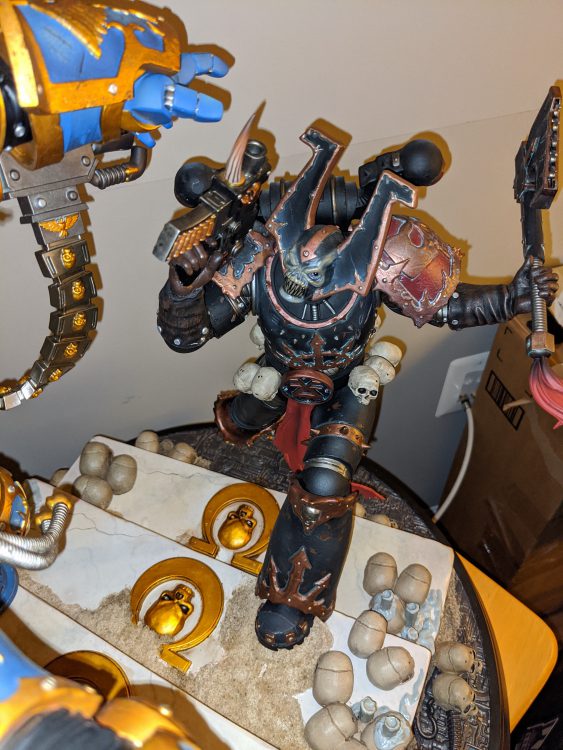 The first unlucky Heretic Astartes to fall to Guilliman’s blade in ten thousand years, he is much smaller than Guilliman and a bit less defined. Still, he has plenty of character! The sculpt is a modern interpretation of one of the old plastic Khorne Berzerkers (the skull-faced one), and carries a vicious looking chainaxe and bolt pistol. The armor (legs and torso) reflect a more modern Black Legion design.

Paint-wise, the statue makes the armor of this dark warrior look suitably scarred and worn. The dull gold and greenish hue of the Black serve as subtle weathering, and complements the diseased look of the armor. The skull helmet is highlighted in such a way as to make me wonder as to whether the helmet has simply become the Marine’s face after all this time, or if it’s a helmet. Likewise, the dark, dull red is technically competent. But the end result is that he is a mere complement to the heroic Guilliman’s more vibrant colors and towering stature. 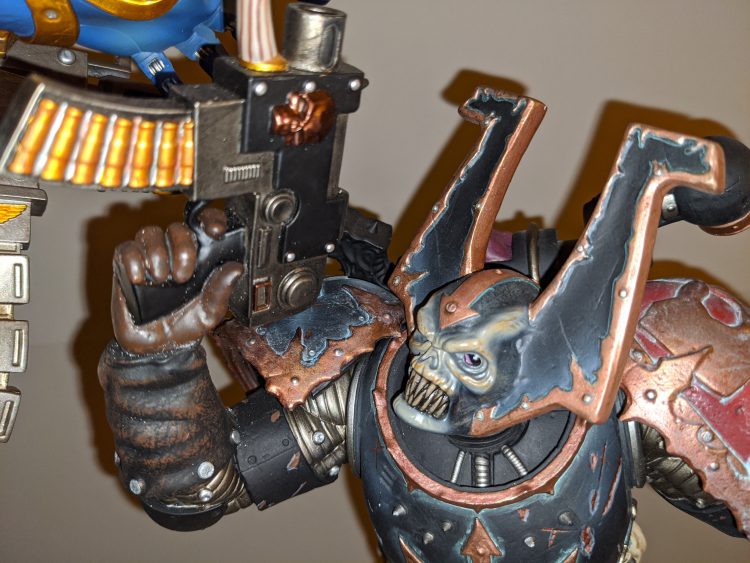 BLACK LEGIONNARE SCULPT: 9/10. I couldn’t figure out where to put the chains, so it loses a point on that.
BLACK LEGIONNARE PAINT: 10/10: It does exactly what it needs to do: complements Guilliman.

This is the most impressive Warhammer piece I own, and unless I decide to get a Warlord Battle Titan from Forge World and have it professionally painted, it will always be the most impressive Warhammer piece I own. Nevertheless, as much as I like the statue and all the little details, there’s just enough that bothers me – the not fully-painted Sword, the instructions which don’t explain how to put on the chains, and the fact that a global pandemic blew up where I was going to put this statue (in my office at work) that I probably would not get this statue if I had to do it all over again. But it would still be a close call, because it is really, really cool looking. But it’s also really big.