Welcome to Ruleshammer! This week is the fifth “episode” of a series I’m calling Ruleshammer Battle. A step by step explanation of a small game of warhammer 40k. Remember the banner below will take you to the Ruleshammer 9th Edition Compendium, for all the questions I’ve answered for the last few months!

Welcome back! If you missed Episode (4), I’d recommend having a read of that first to get caught up! Last episode we went through all the Tau’s Shooting, Melee and Morale Phases. This week lets see how we faired VP wise, and see the Death Guard begin their turn.

Robert “TheChirurgeon” Jones – I’m back here too for the occasional note on high-level play. I’m also an editor, so Rules Rob can’t stop me.

In episode 3 I made it clear that having a plan for your turn before you start making any moves will help figure out what those moves should be. The turn is over now and it’s time to compare what the Tau wanted to achieve to what they actually managed to do. Let’s go through it point by point; first of all here’s what the board looked like at the end of that turn: 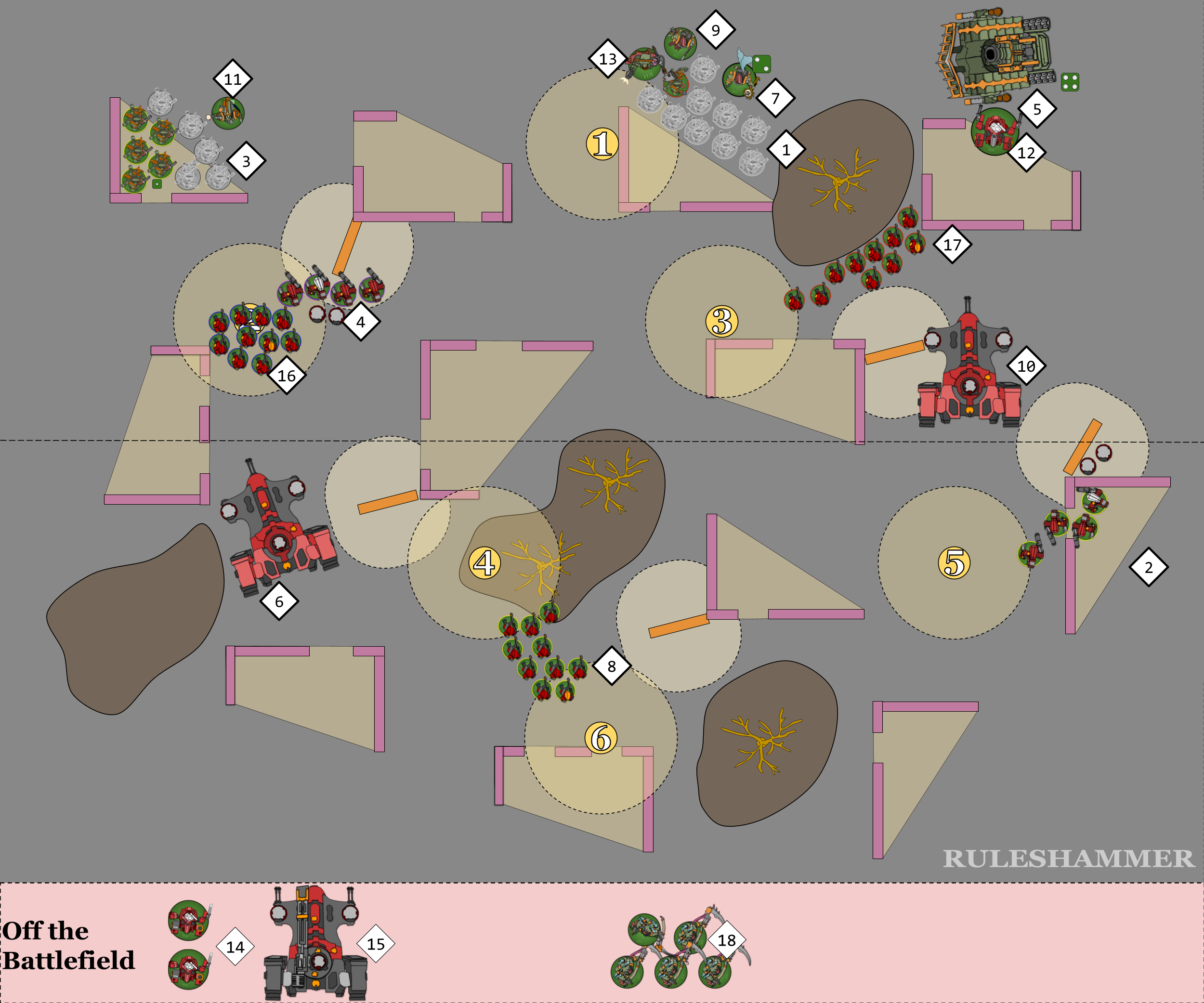 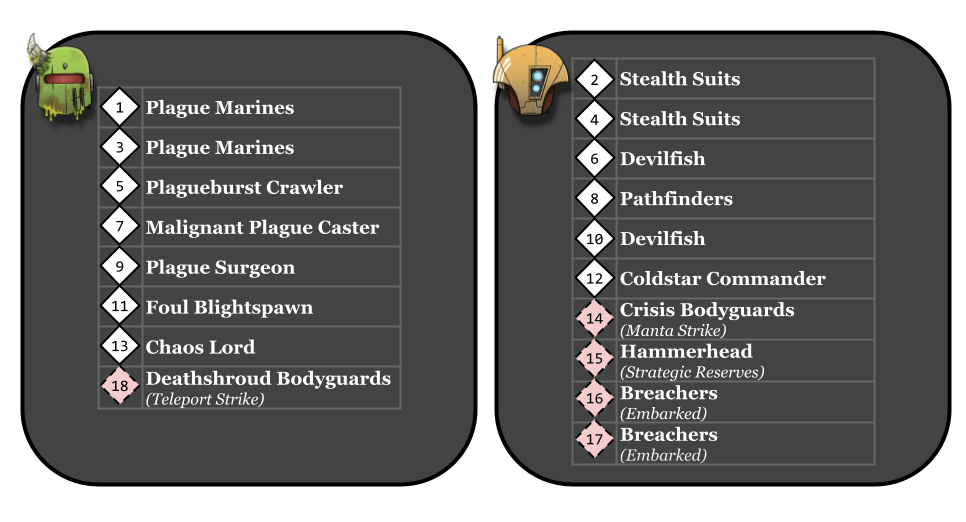 The Primary Objective for the mission awards 2 VP at the end of the Turn for controlling an Objective in Enemy territory. That’s Objectives 1, 2, or 3 in the diagram above. 1 is going to be pretty hard to reach, but 2 is very much in reach of either the Devilfish (6) (and its embarked unit) or the Stealth Suits (4). The Stealth suits could also likely reach 3 with a good advance roll, but doing so would leave them very exposed.

The Tau did manage to reach Objective 2 with a whole unit of Fire Warriors and some Stealth Suits, and managed to get one Fire Warrior onto Objective 3. It’s the end of the turn now so this will score +2VP for the Tau player. Remember that a game of 40k is made up of 5 rounds where both players have “a Turn” so whilst people might say “we’re still on Turn 1” for either player’s first Turn, it’s actually Round 1; both players have a separate “end of the turn”. Some rules do use “end of the battle round”, or even “end of the game”.

The Engage on All Fronts Secondary could easily score 3VP for them this turn. The Tau have units multiple units – (6), (4), (10), or (2) – that could move forward to secure the left and right opposing table quarters.

The Tau player did manage to get an eligible unit into every quarter of the board. So they will score the full +3VP for this Secondary. Remember that it’s whole units that must be in the quarter, this is why the Stealth Suit unit in the bottom right quarter didn’t cross that boundary line.

Note: This series is using GT2022 Nachmund missions and rules, changes to the Engage on All Fronts secondary subsequent to that book are not being used.

Rob: It’s worth noting here that in Nephilim you are required to be more than 6″ from another table quarter to count for Engage, and so in this case it doesn’t look like either of the lower two table quarters would count, though it would have been relatively easy to position units in order to score this. Note that this change also makes Engage on All Fronts much, much worse (and harder to score) in Incursion games, where you have a smaller board to work with.

The Grind them Down Secondary is trickier to plan for; it’s plausible that enemy units Plague Marines (3) and Foul Blightspawn (11) could be destroyed this turn, but just 2 units is not an insurmountable challenge for the Death Guard to respond to. Committing too many forces forward at this point as well will leave the Tau’s deployment zone exposed to the Deathshroud when they arrive in either Turn 2 or Turn 3.

This is where things start to unravel for the Tau player, they actually managed to kill zero units in this first turn. Both the Plague Marine units survived, just about, which also leads onto the next failure.

Rob: This is basically why Grind Them Down is a trap for most armies – once you miss those points there’s no way to get them back, you have to kill at least one unit per round, and if you’re going first your opponent gets all the information they need to stop you.

The Tau failed to kill enough Plague Marines (3) to remove the Foul Blightspawn’s (11) Look Out, Sir protection, but they did take some pot shots at the Malignant Plague Caster (7) getting it down to 3 wounds. Not scoring any VP for Assassination in Turn 1 isn’t all that atypical though, and it’s really only because of the small size of these armies that the opportunity is coming up at all. With that all tallied lets see the score. 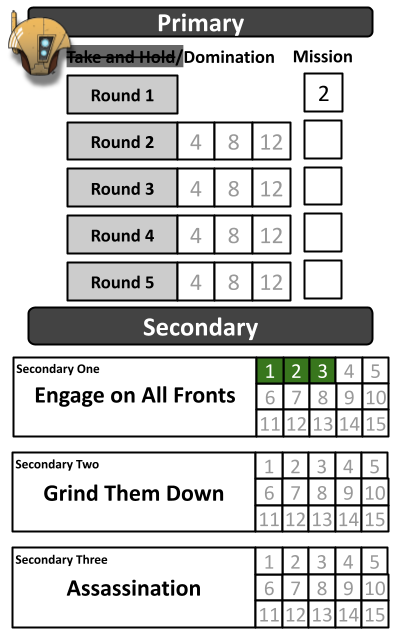 Only the 5VP in the end; a bit shy of the 10VP our plan was hoping for. The Tau are in control of a lot of Objective though but not with anything with significant resilience, what they remain in control of when Turn 2 begins will decide a lot.

The Death Guard Characters on the battlefield don’t have any Command Phase abilities to declare.

The Tau player has no abilities to declare in the enemy Command Phase.

Again: Let’s Stop and Have a Plan!

Lets look at the Death Guard secondaries they picked again. 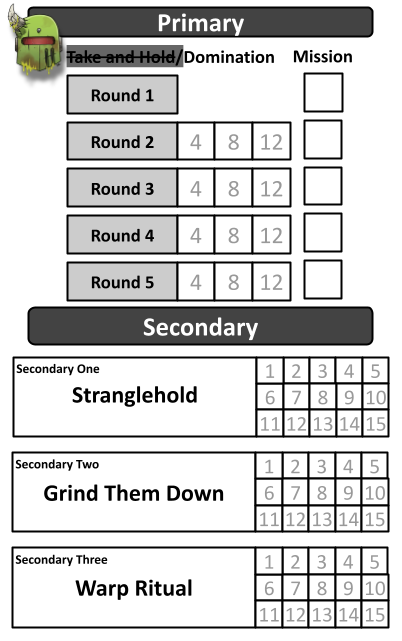 Start of the Movement Phase

INEXORABLE ADVANCE
– This unit counts as having Remained Stationary if it did not Fall Back or Advance in your previous Movement phase.
– If this unit has the VEHICLE keyword, it does not suffer the penalty incurred to its hit rolls for firing Heavy weapons at enemy units that are within Engagement Range of it.
– If this unit has the INFANTRY keyword, it can ignore any or all modifiers to its Move characteristic, Advance rolls and charge rolls.

These abilities interact: The Plague Marine units will be able to move and still fire their Bolters at full range twice. This is because they will count as having “Remained Stationary” due to Inexorable Advance, which satisfies the criteria of Malicious Volleys.

Inexorable Advance also means that the forest between some of the Death Guard army and the enemy doesn’t slow them down during the charge phase. Charging to take objectives will likely be key to the success of the Death Guard in this turn as they lack the movement distance to achieve their whole plan without making some successful charges.

Here’s the start of the Movement Phase for the Death Guard: 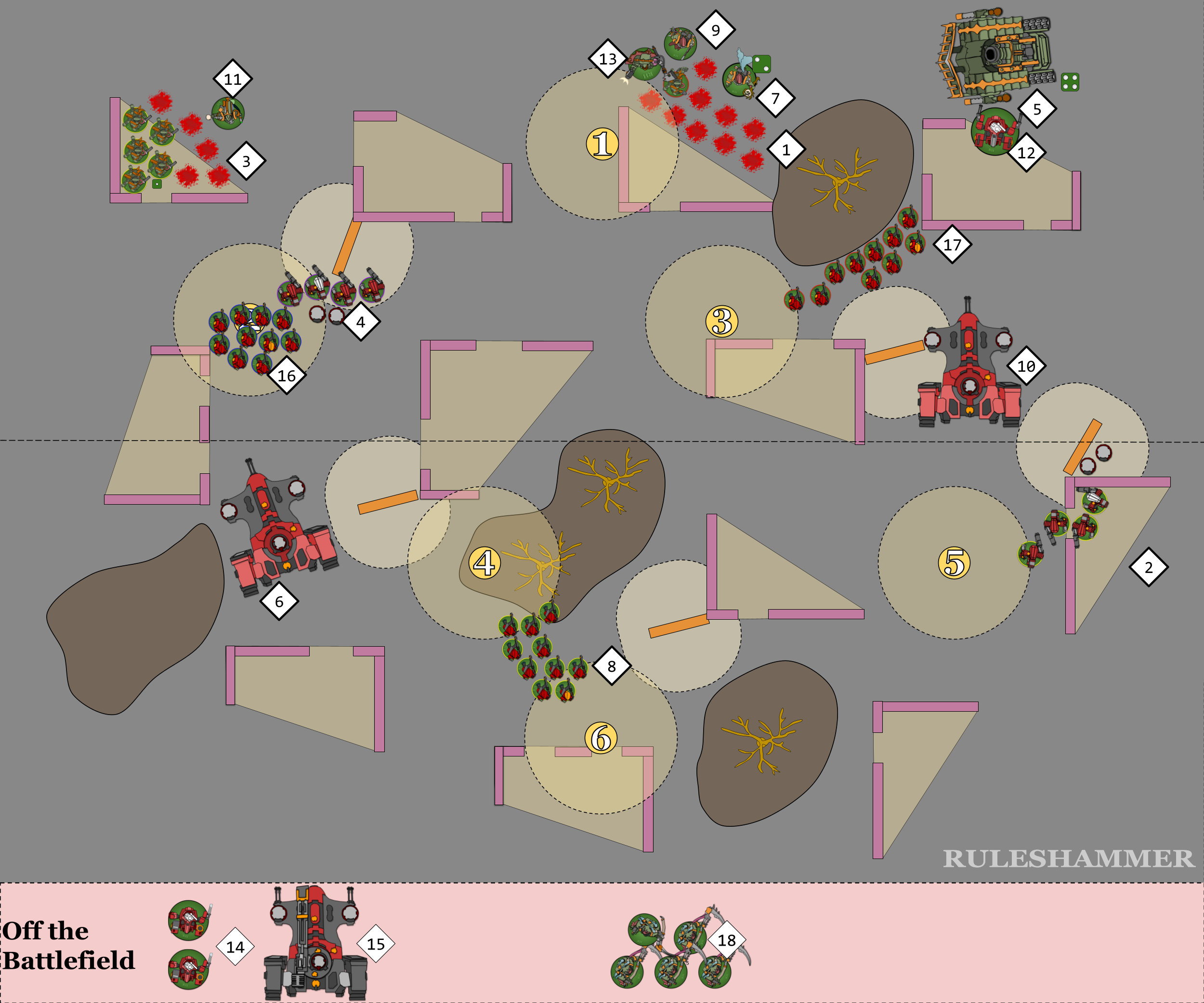 During the Movement Phase 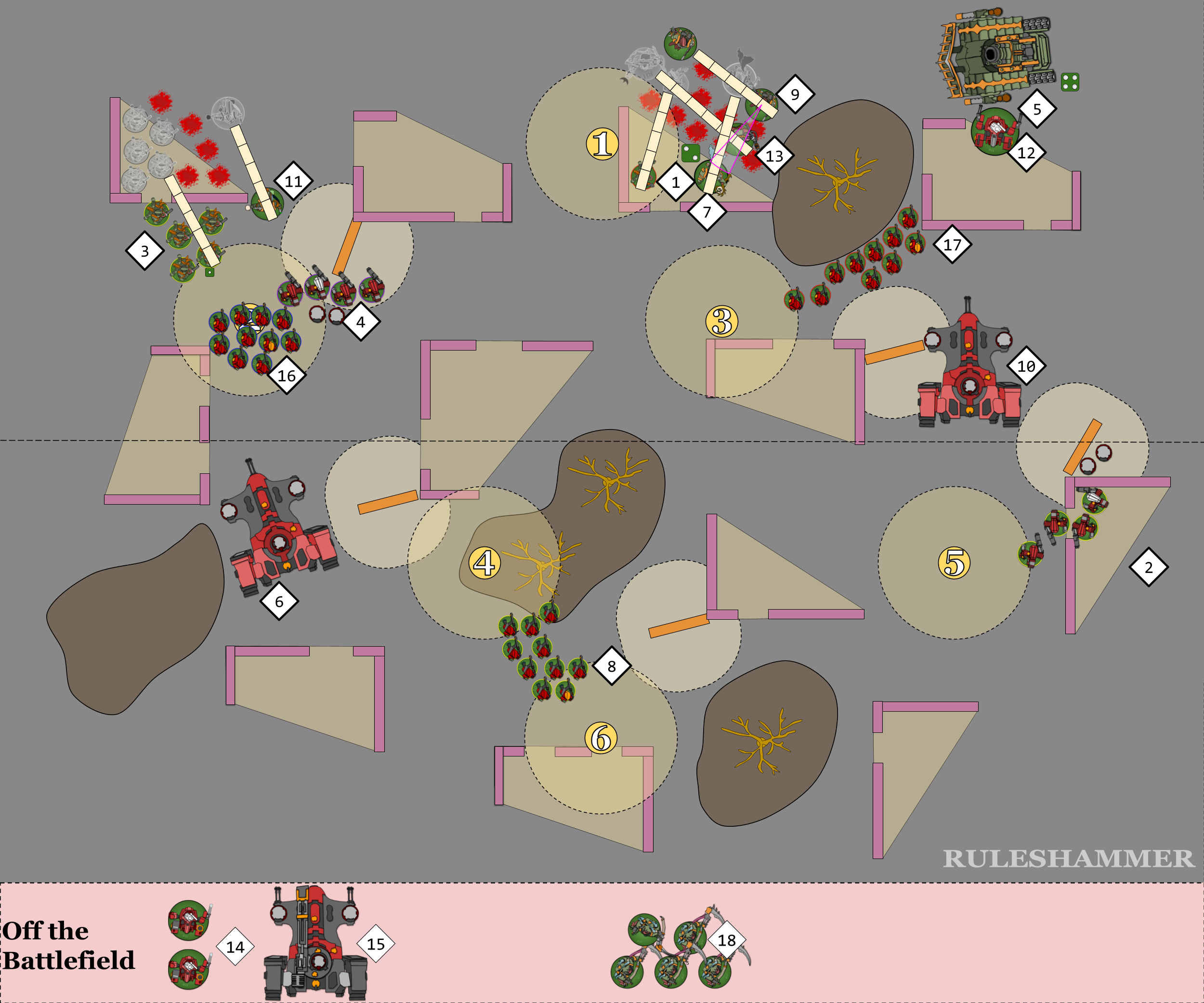 It being the first turn, the Deathshroud Terminators must remain in reserve for the turn.

End of the Movement Phase

At the end of the Movement Phase the Plague Surgeon (9) use their healing ability on the Plague Caster (7).

Revitalising Malignancy: At the end of your Movement phase, this model can heal one friendly BUBONIC ASTARTES INFANTRY model whose unit is within 3″ of it. That model regains up to D3 lost wounds. Each model can only be healed once per turn.

They roll 2 on their D3; healing the Plague Caster back to their full 4 of 4 wounds. They could remove the dice at this point if they wished to. 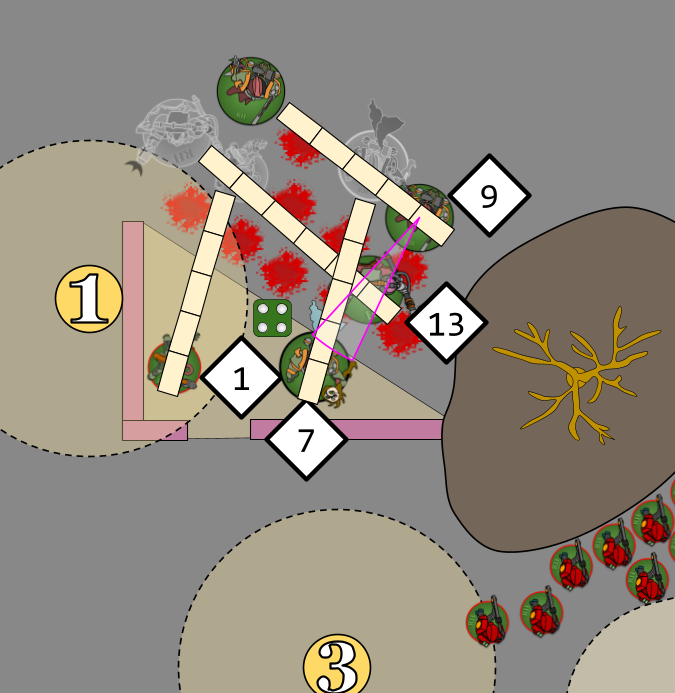 The Plaguecaster, being too far away from the centre for the Warp Ritual Secondary this turn is going to attempt some psychic powers. They know 3 powers.

MIASMA OF PESTILENCE
Blessing: Miasma of Pestilence has a warp charge value of 6. If manifested, select one friendly DEATH GUARD unit within 18″ of this PSYKER. Until the start of your next Psychic phase, each time an attack is made against that unit, subtract 1 from that attacks hit roll.

and the old faithful,

SMITE
Smite has a warp charge value of 5. Add 1 to the warp charge value of this psychic power for each other attempt that has been made to manifest this power by a unit from your army in this phase, whether that attempt was successful or not. If manifested, the closest enemy unit within 18″ of and visible to the psyker suffers D3 mortal wounds. If the result of the Psychic test was 11 or more, that unit suffers D6 mortal wounds instead.

The Plague Caster can actually use Miasma of Pestilence on themselves as the ability does not say “other friendly” and they are a friendly DEATH GUARD unit within 18″. This should help the keep them around to do Warp Ritual later on.

Rob: In reality you’d never take Plague Wind when Curse of the Leper was available and this is why. Curse of the Leper here lets you roll 7D6 and score a mortal wound for each value that beats the toughness of the target. This turn it’d only be rolling a 4+, but on future turns with units in contagion range you could easily make that a 3+, and even rolling a 4+ odds are good you’ll get 3-4 mortal wounds on the unit instead of 1-2 with Plague Wind. Don’t take Plague Wind, kids. 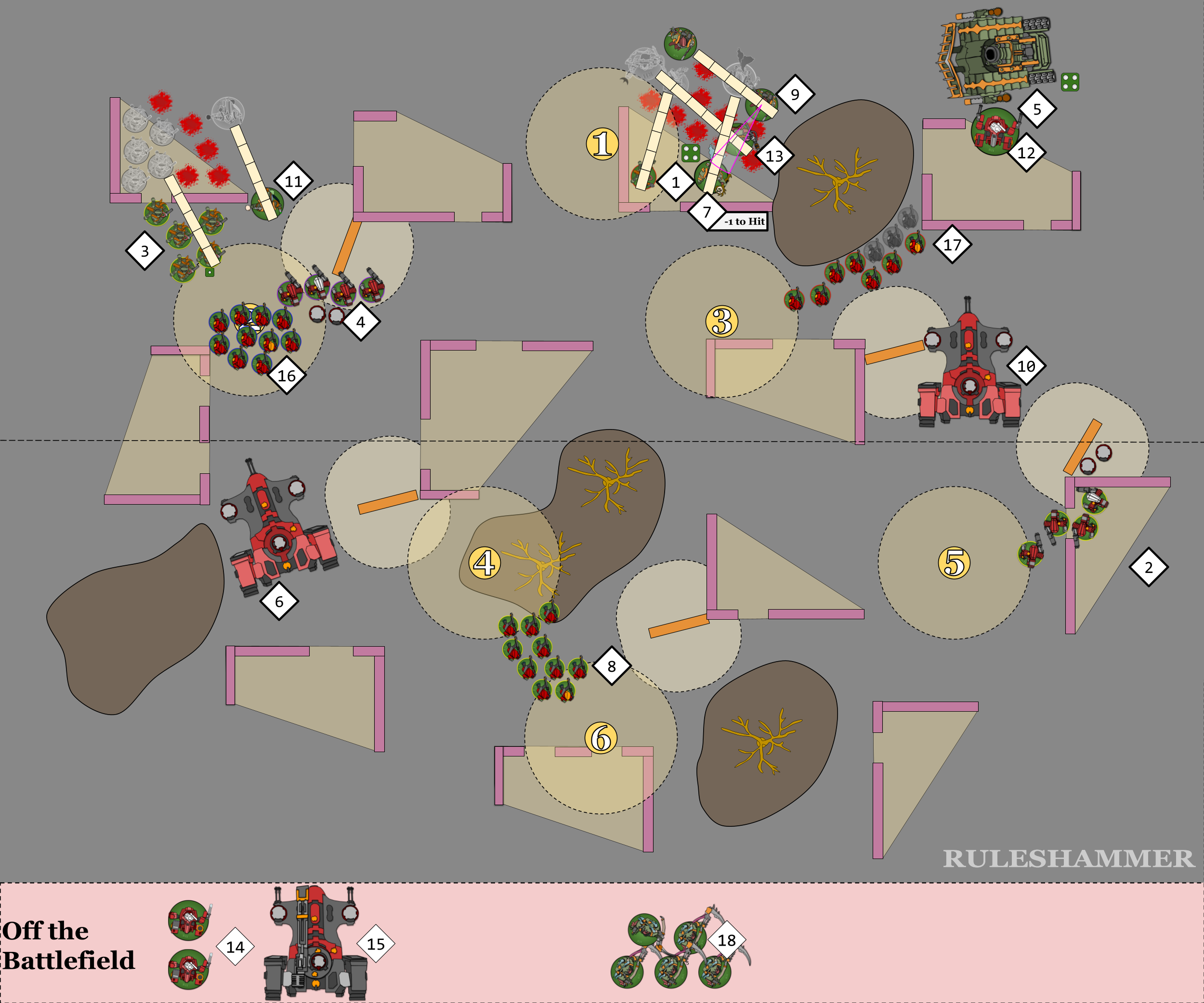 That’s almost half the turn wrapped up! In episode 6 we’ll go over the more of the Death Guard’s turn!