Although we love Warhammer 40,000, the game’s complexity can be daunting, particularly for newer players. In Ruleshammer, we look at the nuances of the game’s rules and how they affect gameplay, clearing up potential issues and helping make sense of some of the game’s less common interactions. In today’s Ruleshammer, Rob “Vre’kais” Chilton is looking at what happens when you charge a unit on a different vertical level.

This is a controversial rule and its application varies quite a bit on the context of what is charging, being charged, and how exactly they are elevated. This post will split the positions that models might be in into two key types, and we’ll see how models with and without the FLY keyword handle each:

First though, let’s review what the current FAQs have to say about these rules:

Q: If a unit declares a charge against an enemy unit that is entirely on the upper level of a terrain feature such as a ruin, Sector Mechanicus structure, etc., but it cannot physically end its charge move within 1″ of any models from that unit (either because there is not enough room to place the charging unit, or because the charging unit is unable to end its move on the upper levels of that terrain feature because of the expanded terrain rules for it – as with ruins, for example), does that charge fail?
A: Yes. [Core Rules FAQ, pg. 10]

In practice, this means that you need to be able to physically get the model onto the level the enemy is stood on to complete the charge. You can’t “wobbly model” half way up a wall or ruin to claim a successful charge. So with that in mind, let’s dive into two types of terrain that will cause a unit to be on a different vertical level from the charging unit.

What do I mean by Containers and Crates & Barrels?

Charging a unit on MUNITORUM ARMOURED CONTAINERS and similar features

Charging models on these containers can be extremely difficult; here’s a top down view of some containers as they are often used: 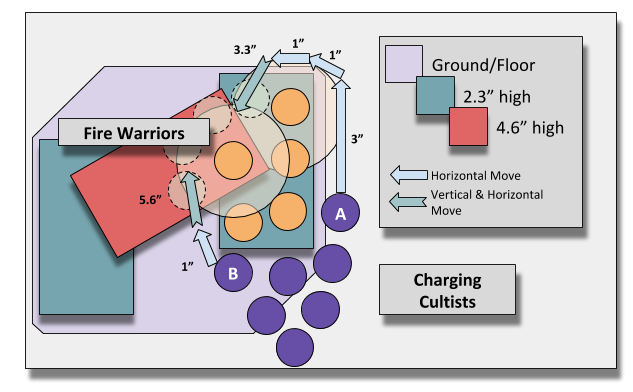 These poor Tau are surrounded by a swarm of Cultists just eager to try out the pointier ends of their weapons. (Editor’s Note: Don’t feel sorry for them. These Tau are going to get what they deserve)

Each munitorum armoured container is approximately 2.3” tall, so 4” of movement would be enough for the 2.3” of vertical distance and 1” horizontal that the Cultists need to reach their target (with 0.7” to spare), but there’s not much room on them to place models.

It cannot be moved through other models or through terrain features such as walls, but can be moved vertically in order to climb or traverse any scenery. [Moving – Core Rules Pg3]

If you managed to roll high enough for Model A to make its charge, you could move both A and B, the rest of the unit would need to remain within 2” Horizontally and 6” vertically of on these models though. Models A and B would be less than 2” apart horizontally and less than 6” apart vertically in their charge positions.

What about models that can fly?

First let’s check the latest rules for the fly Keyword;

So they can ignore vertical movement in the movement phase, but not in the charge phase. They can however move through enemy models in both. Let’s see how that changes our charge distance, if the charging unit were Assault Marines rather than the ground bound Cultists.

The FLY keyword has opened up some options here;

Note: Neither the Cultists or the Assault Marines would be able to get any extra models into combat with the Pile In move, 3” is not sufficient movement to climb the containers.

You might well have seen these in memes but here’s the general premise, as well as why I feel most of these terrain pieces should be designated as BARRICADES.

There are some terrain pieces that are large enough for a single model and no others, some of them come with the MUNITORUM ARMOURED CONTAINERS, Barrels and Crates like these

If a model was on these, then it would be impossible for an enemy model to get within 1” of them with the charge move granting it effective charge immunity. Even the most hungry Genestealers would be powerless, evidently entirely incapable of attacking the models ankles.

However if these terrain pieces are assigned the BARRICADE terrain type the situation changes (though arguably this is perhaps a liberal interpretation of the word opposite).

When a unit charges a unit on the opposite side of a barricade, the charge is successful if the charging unit can end the move within 2″ of the target unit instead of 1″. In the Fight phase, units on opposite sides of a barricade can be chosen to fight with and can make their attacks if there is an enemy unit within 2″ instead of 1″. [CA2019 Pg 106]

The 2” combat range rules would allow a unit to be at the base of these barrels and attack the units on top of one of them. This is however assuming that being at the bottom of the barrel, attacking the top of one, still counts as being on “opposite sides”. My advice is to discuss these sorts of terrain with your opponent pregame; it’s the opinion of this blog that assigning them the BARRICADEs terrain type is the best way to remove the charge immune barrel problem within the rules but there are no FAQs about this issue at time of writing.

Ruins provide a multitude of issues for the would be charger. Not just the elevation but also the limitations on what models can be on their upper floors. Let’s start with the relevant ruins rules themselves;

Only INFANTRY, BEASTS, SWARMS and units that can FLY can be set up or end their move on the upper floors of ruins (any unit can do so on the ground floor). INFANTRY models are assumed to be able to scale walls and traverse through windows, doors and portals readily. These models can therefore move through the floors and walls of a ruin without further impediment. [CA2019 Pg 107]

It’s often worth on occasion checking if a unit has the INFANTRY keyword because it’s not always obvious, Kataphron Destroyers for instance (a model with tank tracks) do have the INFANTRY Keyword. It also matters for units charging from outside of the ruin if they need to pass through the walls. Necron Destroyers have both the INFANTRY and FLY keywords so when/if charging they can move through walls, floors, and models.

Let’s turn back to some diagrams to see how this all works in practice;

In this scenario there are some Guardsmen on the ground floor, with Tau on the floors above. Because Guardsmen have the INFANTRY keyword work they can charge directly vertically. They’d need a just 3” charge to reach the Tau on the next floor up. However if there were a few more Tau in this Ruin, and they kept to one floor, it’s possible to make the charge impossible.

This time there’s no position for the Guardsmen to charge to in this ruin, though this example uses a rather small ruin, only about 6” square.

What about models that can FLY?

For ruins FLY isn’t the keyword it used to be, the changes to in the charge phase make INFANTRY the keyword of choice for charges into ruins. The ability to pass through the wall and floors is just that powerful. They are some specific times when it would be useful though.

This time there are two units of Fire Warriors, spread across to the ground and first floors. Normal Boyz would be able to charge the ground floor unit quite easily, as they are in base to base contact with the wall and only need to be within 1”. Close Combat attacks don’t need LoS either. It’s usually good advice to think of Ruin walls as being about as effective as Imperial Flak armour, they’re very much more the idea of walls than actual obstacles in practice. The Stormboyz can go a step further, with sufficient charge they can move through the walls because of the INFANTRY keyword, and then through Fire Warriors because of the FLY keyword. If they rolled approximately 7” this could be their eventual position.

This charge has managed to tag both of those Fire Warrior units in combat. That’s Orkish efficiency for you!

Note: A unit that doesn’t have the INFANTRY keyword has to go around floors and not through them. Keep that in mind.

I hope this has helped to clear up charging the high ground, maybe it’s just made you think of even more questions. I’m always after more rules issues for future posts or Q&As, you can submit them here, or you can join the discussions on Reddit here.

Disclaimer: this section is entirely opinion and not reflected in the rules.

I think that having charges be impossible, is rather dull. Most ruins are not modelled with stairs, ladders, or piles of rubble to climb but the rules imply they are present and used to climb to the ruins upper floors, or to climb the walls.

What do I think should change?

I would bring in something inspired by the Apocalypse rules, I’d have it so that any models occupying the same ruins are “in combat”. This would represent the occupants fighting across several floors, maybe trying to hold the line on the windows or stairs as best they can. This would significantly reduce the effectiveness of Ruins as protection against charges though, so how would I make up for that? I’d change Overwatch to ignore Ruins when checking LoS, by units in the Ruin (charging around a ruin or through one to something on the other side would still need LoS). This would represent the warriors in the building having prepared some defense against their positions being charged, and being read to fire at any points of access. I’m not a rules designer though.