You know how we dissect every part of the competitive meta on this site? Really get into the reeds about what owns, what does not own about a codex? Talk about the best way to win ITC games? You betcha.

What if we did that to a narrative event?

Behold, my article on how a simple but well run narrative event can have a big impact and the lessons you can take from it.

These are all valid questions^, so let’s figure them out together.

I guess we should start with the premise of the event. The logistics involved and the ‘vibe’.

Basically, a bunch of us wanted to do something rad and narrative. Saxon agreed to helm and GM the event and Dan, the store owner, agreed to host it. Looking back on it, this moment was critical for a few reasons. Namely:

A: Ultimately someone needs to take responsibility for running the event, defining its scope (more on that in a bit) and herding everyone to a common goal.
B: You need somewhere to play. Dan’s store is an ideal location as we already all go there. I would like to note that my suggestion of “STREET HAMMER, NARRATIVE HAMS ON THE SIDEWALK” was shot down for many reasons that I won’t go into here*
C: Without a god damn venue, you have no event. If anyone is taking notes, this point will be in the exam at the end of the course. If we had an exam. Which we don’t.†

Saxon volunteering to run it was also, again, critical. Without someone taking charge you’re going to end up stuck in the “cool ideas” stage. This is a stage that will literally never end. Seriously wargamers are the god damn worse about this. You know. I know it. You will spend hours, days, months, literal centuries of talking about “how cool doing XYZ, ABC and 123” would be, without actually doing jack shit about it. So. Someone needs to bravely say “I’ll do it.” and break the seal. For us that person was Saxon.

“The Vibe” in the shop was also ripe for some narrative gaming. A bunch of us love the crap out of 40k lore. A few of the group have already planned and plotted out backstories for our armies. This gave Saxon some idea threads to pull on. He elected to do so in a simple but effective way.

That way being a GM’ed map campaign. An incredibly simple one. This deliberately reduced scope stopped the thing becoming way too much work or requiring a huge time investment from the GM and players. This is critical for getting narrative gaming off the ground in your FLGS. By walking before you run, you can achieve a good event and then grow in complexity/involvement from there.

This is and was a good idea for a few reasons other reasons, which we will now go into in a bit more detail. Getting the players engaged was one. Making the alliance system adhoc on the day let the campaign be resilient was another. Keeping things basic means things weere easy to keep track of. Being easy to explain made it digestible. Having a GM made it workable.

Player engagement was handled in a few ways. Each player was required to do a few things:

These three things would give the players a way to get their corrective juices flowing and get involved in the campaign. For example one of the players (Hi Penny!) approached me about making a Red Corsair Sword of Davion, and produced an awesome backstory and conversion.

By making the alliances adhoc on the day it reduced the real world logistical burden on the campaign. There is nothing worse than organising a campaign in meticulous detail and then having Dave or Gary or Jess’s method of transport explode, preventing them attending and therefore delaying or worse case, destroying the event. The method of doing this was simple. We divided into groups of Xenos, Chaos and Imperium. The Chaos and Imperial sides of the room had good numbers, so we were then fragmented further, into groups of 3 or 2. After this we were tasked to elect captains for each team. I was nominated the captain of our team and we named ourselves Strike Force: Viridian, which being obviously the coolest name and having the most armies painted green guaranteed us victory. 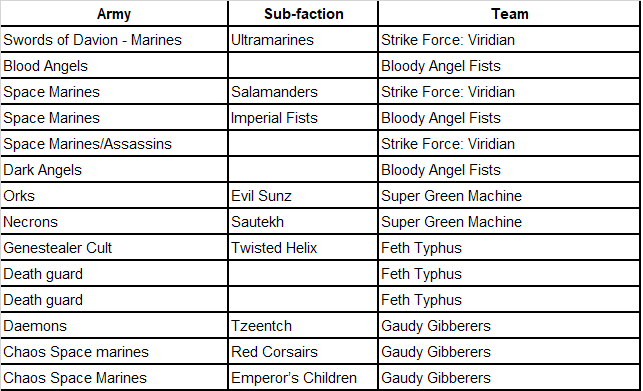 Keeping campaign map actions like moving, attacking and defending basic as hell made downtime and admin between games short and decisive. This is important for a few reason, as we covered previously, organising TT gamers is like herding cats. To counter this, team captains were briefed on the worlds, then asked to secretly pick one world out of the ones in play (see below) that would be the teams primary objective. I picked the biggest planet, the primary hive world, the hardest planet to hold with its 2 sectors, because it was A: very big and B: therefore very important. This line of thinking was replicated unknowingly by every other faction but Super Green Machine. With our goals in mind, we had to select one player to be defender, attacker and neutral. We then diced off, picking a spot for our defenders, then picked attackers in reverse. Neutral players where then allocated by a fresh roll off.  Another pro move was printed scoring sheets, that we filled out during the day and fed back to the GM. Once this was done, efforts were made where possible to make sure no one played on the same table or person twice, which resulted in a few shuffles of which faction member played where.

Making the campaign map easy to read and the game’s effect on it easy to understand was achieved by each table representing a planet or thing on the map, with the large hive world’s double sector taking up two boards. Winning meant you took or held that point on the map. If you were defending and nabbed a draw, you also kept it. If your planet didn’t cop an attack, you could hold the ground or elect to throw that player at another area so that person still got a game. This simple, but again, effective system gave us our 3 games though the day. After each game match up took place, Saxon acting as the GM gave the players a mission and deployment map based on the rough template for the round and the armies involved. In addition, each player was given a goal based on their narrative submission that they had to tally though the day, for example one of the Death Guard players had to lose and then retake objectives. The Red Corsair had to kill relic holders in close combat. I had the Swords on a open diplomatic mission, seeking to prove to the population that they were the heroes they sorely needed, while secretly recce-ing the sector for artifacts to help the Imperial Davionic Republics. Therefore I had to tally my kills of warlords and characters in close combat.

While I have stressed that the above is all pretty simple in the way it works, it does require a large amount of work and thought to make it work organically on the day. You’ll need a GM to handle it and that person will need to think about some rough matchups and how they want to adjust the missions to suit. I’m not saying have a written plan for “what if Jim plays Jane in round 3” but thinking about it and having a few rough ideas ready to go will help out. Think like a D&D GM. Have a framework and some stuff in the back pocket you can slot in to suit what your players do with the shared narrative though the day.

So, with the above in mind, you can see why the event was a success. Here’s the key takeaways for your own campaign events at your FLGS:

For the record, Task Force Viridian took the hive world, totally due to the combined tactical genius of the players and not dumb luck, while the Green Machine took their objective planet too. My army also won best army which owned. Prizes were given out for best story, character, army and some players opted to get shirts printed with the army logo and some text. This really added to the atmosphere at the event.

Needless to say I cannot wait to see what happens in the Kradinis campaign next. There will be a write up by Saxon coming about what really went down during the campaign, which will hopefully give us some clues about what will happen in round 2, where we get to play on the other side of the asteroid belt.  I hope this article inspires you all to go out, plan and play in your own narrative events at your local FLGS.

If you do, please get in touch with us and tell us how you went. Comment on this article or shoot us an email at contact@goonhammer.com . Also you can find us on the Goonhammer Facebook page, or tag us on Twitter or hit something with the #goonhammer tag.

As for me you can find me: