Ruleshammer: Mistakes were made – in my first game of 9th

With the new edition nearly upon us, we had Rob “Vre’kais” Chilton sit down with the new rulebook in the Indomitus boxed set and write his thoughts (in great detail) on the new rules – what’s changed, what needs clarification, and what you need to know. This week somethings a bit different, Judge Ruleshammer admits their mistakes in their first game of 9th.

I have now played one whole game of 9th edition and it was fun, but we definitely made some mistakes. Some we fixed mid game, some are fundamental differences I missed between editions. Let’s talk about the areas we got wrong.

How it took 4 attempts to work out the final score.

I can not overstate how important a score sheet is for tracking a game. We made some mistakes totaling up the VP as we went like we did in 8th and having to backtrack to figure out what the score should be as we encountered each issue was not the most fun thing ever. This might just be a first game issue, as “max” 15VP for secondaries was pretty much drilled in by the end. As a way to try and assist with this, I came up with the scoresheet below: 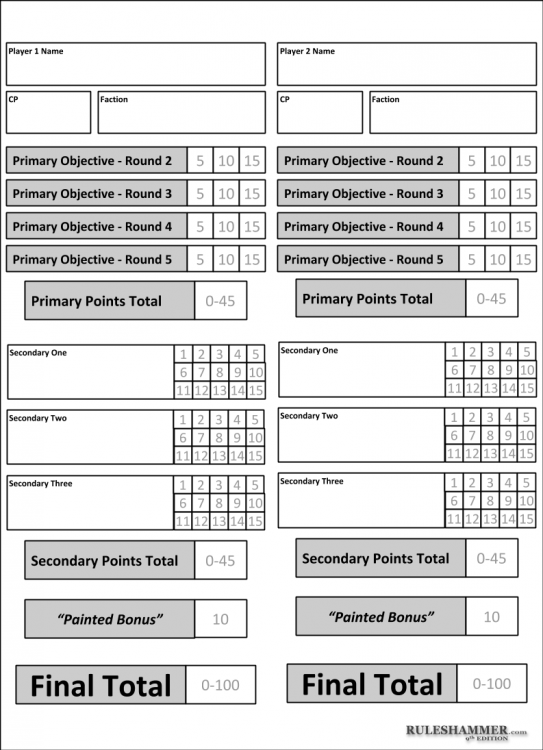 It’s not every mission, but a selection of them have a rule similar to this one from Eternal War’s Incisive Attack Mission

Sweep and Clear: In this mission, if you control an objective marker at the end of your Command Phase, it remains under your control, even if you have no models within range of it, unless your opponent controls it at the end of any subsequent phase.

So in our game, we almost forgot about this until around turn 3. Read the briefings. It does lead to an odd situation though. 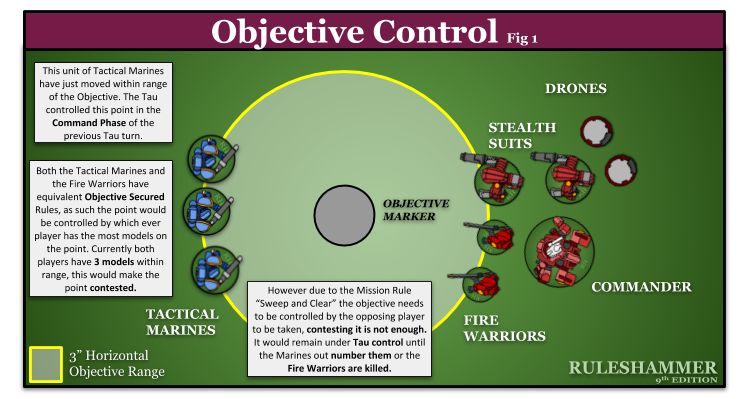 Also however in a similar situation to the one above, only one model with Objective Secured would be necessary to take the point.

We didn’t actually get this wrong, but we started checking LoS a few times before realising the thing we were trying to look through had the obscuring trait. We went through all the traits and rules for terrain before the game, but it’s still something to consider from a tactical perspective if you get an opportunity to shoot. In general though the Obscuring and Dense cover traits work really well, with a few quirks around their wording that I hope an FAQ will clarify soon enough.

This one we just got completely wrong, the new rules for mission set up have you determine mission and place objectives BEFORE the battlefield is set up. There is then a further restriction that prohibits terrain pieces from being on top of Objectives. So no objectives in Forests or in Ruins any more. 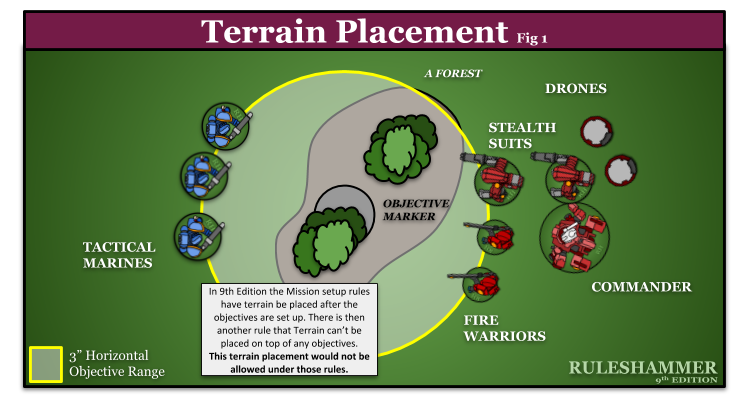 With the first game it’s easy to fall into old habits and my opponent shot with a few units at some units already with less than 3 models in before realising they didn’t need to be killed in order to target my Characters now. It can be quite easy to miss how Look Out Sir differs from the old rules when lots of similar looking models in small units are clumped together. 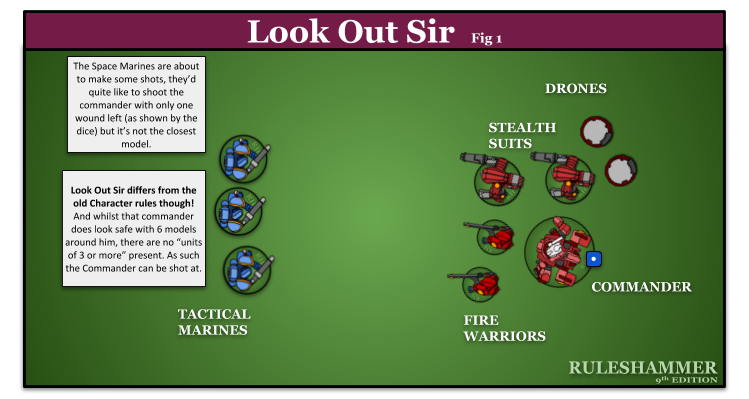 True to my play style as a Tau Mechanised fanatic I charged a Devilfish into a Relic Sicaran Venator Destroyer… and it made its glorious 3 Attacks with WS6+ and failed them all. Just as planned. What we got wrong though came in the next turn where it was just an ongoing combat. The Sicaran was meant to attack first now.

See later on for how Fight First, Fight Twice, Fight Last and Fight Again have been addressed in 9th.

This wasn’t as much a rules mistake as it was a tactical blunder, but I moved a model out from a nice cosy piece of terrain in the enemy deployment zone to shoot at the Sicaran with the Devilfish. What I’d neglected to remember when moving this model was that the Devilfish was using Big Guns Never Tire so my Stealth Suit with its fusion blaster wouldn’t be able to shoot at the Sicaran.

Tales from the Appendix Volume One

Most factions have one weapon or rule that allows a unit to “ignore cover”; however the wording of these abilities varies from rule to rule. In 8th where cover was just the one bonus to saving throws that didn’t matter too much as the “benefit of cover” was uniform. The appendix rare rules section of 9th’s rule book clarifies how the wording of past and future rules will have different effects. Take these two Tau abilities.

Multi Spectrum Sensor Suite: Use this Stratagem before a BATTLESUIT unit from your army shoots. Enemy units cannot claim the benefit of cover against shots made by this unit this phase.

As this rule is general about the benefit of cover it means units can’t benefit from any cover traits at all, this includes Dense as well as Light cover. Contrast this with the Smart Missiles Systems rules from the same codex;

This weapon can be fired at units that are not visible to the bearer. Units attacked by this weapon do not gain any bonus to their saving throws for being in cover.

This rule specifically ignores any bonuses to saving throws from being in cover, so while it would disable Light Cover it would have no effect on Dense Cover.

As I talked about earlier the Fight phase order has changed slightly since 8th. However the appendix also clarifies a specific point about how Charging units and Fight First units interact. Despite the general Fight Phase rules now saying to start phase “player whose turn it is not taking place”, there is a specific ruling in the appendix that covers how to resolve these in 9th.

Some rules allow a unit from your army to always fight first in the Fight Phase, even if you didn’t make a charge move this turn. If the enemy has units that have charged, or that have similar rules, then alternate selected units to fight with from amongst these units, starting with the player whose turn is taking place.

Always Fight Last now works the same way as well, again starting with the player whose turn it is. 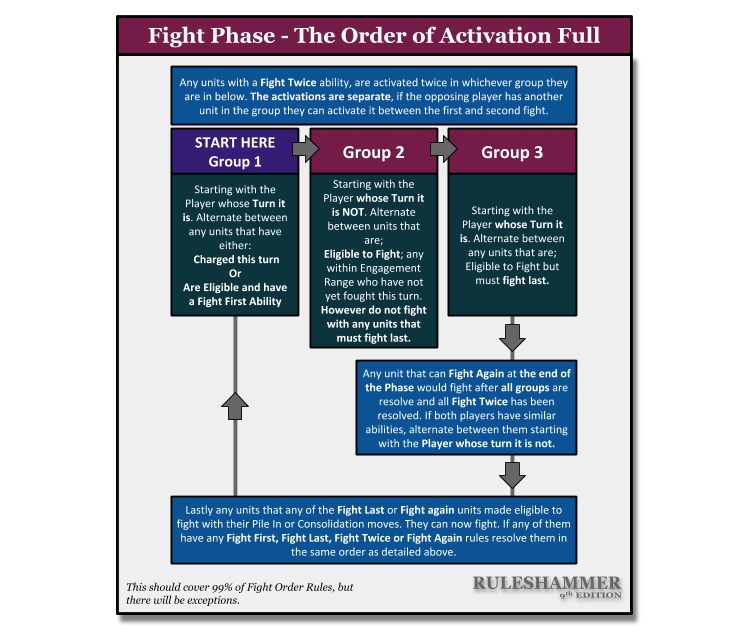 I know there’s going to be an edge case these somewhere, but these kind of clarifications are a step in the right direction – you can tell that they’ve thought through as many weird situations as possible and attempted to address them.

That’s all we have time for this week – there’s only so much you can talk about from a single game! If you have any questions or feedback, or a rules question you want answered, then drop us a note in the comments below, ask a question in our Ruleshammer form, or head over to r/ruleshammer to discuss.