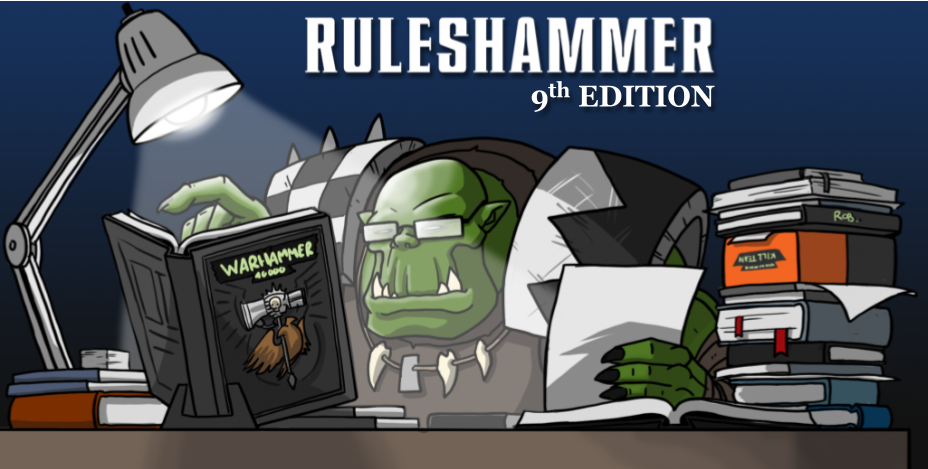 Although we love Warhammer 40,000, the game’s complexity can be daunting, particularly for newer players. In Ruleshammer, we look at the nuances of the game’s rules and how they affect gameplay, clearing up potential issues and helping make sense of some of the game’s less common interactions. In today’s Ruleshammer, Rob “Vre’kais” Chilton looks at 9th’s new rule Big Guns Never Tire.

Quick Disclaimer: Warhammer 40k 9th Edition was not released at time of writing. The contents of this article are based on public previews and incomplete information, I have noted any rules assumptions I have made where relevant. You can find our summary of confirmed information for 9th Edition here and on Big Guns Never Tire here.

The new rule that covers Vehicles and Monsters squeezes a lot of information into a pretty dense rule. If I had a critique it’s that the rule could use a bit of formatting to make the separate parts clearer.

Luckily I write articles online about Warhammer 40k Rules so I can reformat these rules a little to make each part a bit more distinct and there’s nothing you can do to stop me. 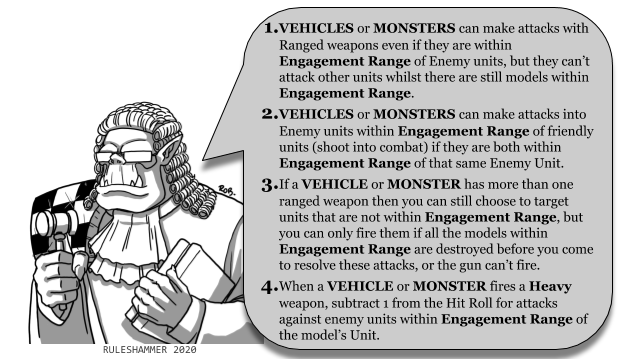 The other bit not included here though is that the new Blast weapon rule for 9th Edition prevents these weapons from being used on Enemy units within Engagement Range.

So no firing Battle Cannons directly in front of your Russes, but you could still declare these weapons are targets outside of combat and hope that the Russes sponson, coax and pintle mounted weaponry are able clear the way to shoot the main gun.

What is Engagement Range though?

Engagement range is the new term for being within 1” of the enemy. Potentially I think it’s been given a name so that it can more easily be referred to in rules and maybe some units will have greater Engagement Ranges than others? For now it’s been confirmed to refer to 1” as it was in 8th Edition.

How about some diagrams though? 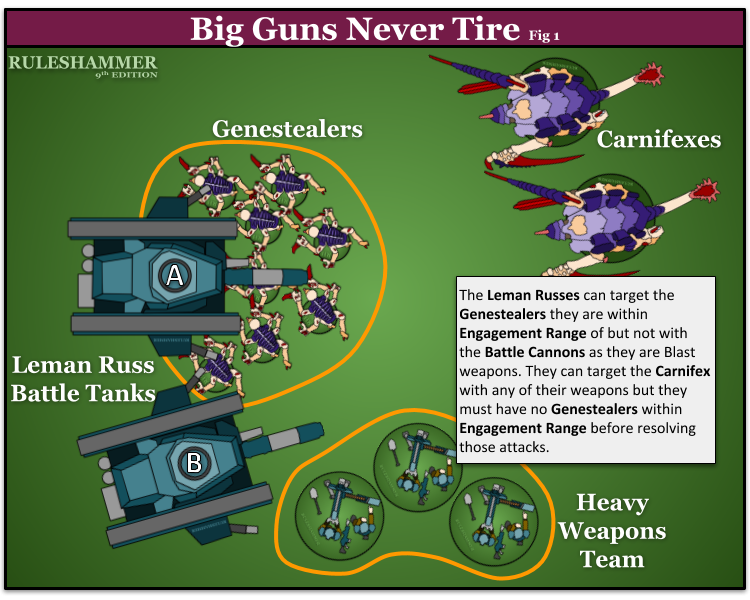 In this scenario a unit of seven Genestealers charged and fought some Leman Russ Battle Tanks (A and B) in the previous turn. It is now the Astra Militarum player’s shooting phase; Big Guns Never Tire allows Leman Russ B to target the Genestealers it is within Engagement Range of, even those they are in combat with a friendly unit. Let’s say it is armed with three Heavy Flamers and a Battlecannon. It targets the Flamers at the Genestealers, but because the Battlecannon is a Blast weapon it can’t so it declares one of the Carnifexes as it’s target

The Battlecannon’s attacks cannot be resolved unless there are no enemy units within Engagement Range of the Leman Russ. So it fires the Flamers first and manages to achieved five Kills. Heavy Flamers have the added benefit of automatically hitting their targets, which avoids the -1 to hit modifier Heavy Weapons such as a Lascannon or Heavy Bolter would have to account for. 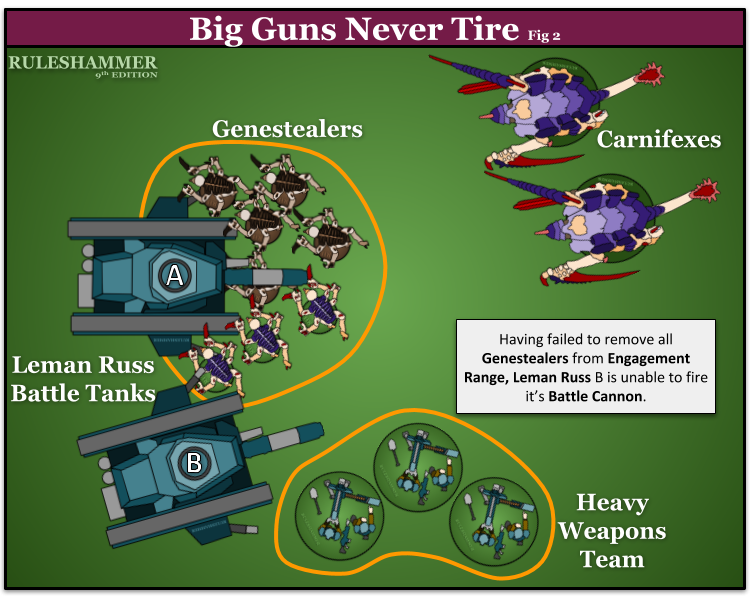 I’ve made an assumption here that wound allocation will remain the same as 8th. This has not yet been confirmed.

If it does remain the same though then the enemy player can remove the five highlight Genstealers and remain within Engagement Range of both Leman Russes. This would prevent Leman Russ B from resolving its Battlecannon Attacks against the Carnifex. Leman Russ A could then go in to kill the remaining 3 Genestealers with it’s not Blast weapons.

Big Guns Never Tire does open up some tactical abilities to have Vehicles or Monsters support friendly units. Take a look at the scenario setup below, very similar to the first one but what’s in combat has changed. 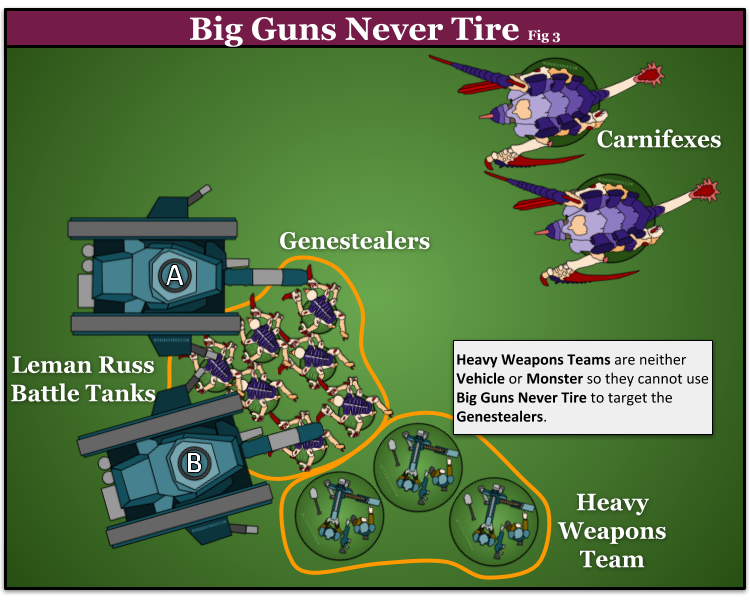 Again I’m making some assumptions about 9th, this time I’m assuming that similarly the 8th if a Unit doesn’t fall back but by some other means the models it was in combat with die during their turn, then it can fire as normal. The main ways this could happen in 8th were via Psychic Attacks such as Smite, which can hit enemies in combat without limit or another friendly unit also in combat kills them either with Pistols or perhaps with a rule similar to the Baneblade’s “Steel Behemoth” ability.

Those assumptions in mind the Astra Militarum player has decided to keep their Heavy Weapons Teams in combat, gambling that the Leman Russes will be able to use Big Guns Never Tire to remove the Genestealers within Engagement Range of them. I think this could be a really strong part of this rule going forward to allow tanks to provide a much greater support role than they did in 8th, meaning that Big Guns Never Tire extends past the models it directly affects.

Here’s hoping though that the Terrain Preview has (I don’t know yet) given the Genestealers some much needed help in surviving to charge units in the first place!

This is an example of future 9th Edition Ruleshammer content to come! I hope you liked the new diagram style. Last week I said I was planning to wait for a while but the 9th edition hype has taken hold of me and this rule and seemed detailed enough to make a start on some diagrams. Unless GW reveals something equally detailed by next week expect to see some 8th Q&A here as promised! And don’t forget If you want your rules debate answered before the end of this edition, you can submit questions both on reddit, or via this form. Or drop us a note in the comments below or email us at contact@goonhammer.com.