With the new edition nearly upon us, we had Rob “Vre’kais” Chilton sit down with the new rulebook in the Indomitus boxed set and write his thoughts (in great detail) on the new rules – what’s changed, what needs clarification, and what you need to know. Ruleshammer will be doing daily posts over the next two weeks talking about key changes to the rules and going over each phase of the game.

There’s a lot to cover with the “new” movement phase, some changes, some clarifications. Plenty of wordy new explanations to go through with some helpful summary bullet points.

First of all, probably in my top 5 of changes for 9th is that the game now has official types of move. Gone are the abstracts “has moved”, “has advanced” there’s now 4 types of move (for the movement phase at least) and there are distinct and clear.

The most normal of the moves. This hasn’t changed much since 8th but the limitation on moving within 1” is now being unable to move within Engagement Range. It wasn’t something that occurred frequently in 8th but this does mean that you can’t move directly under a unit any more. 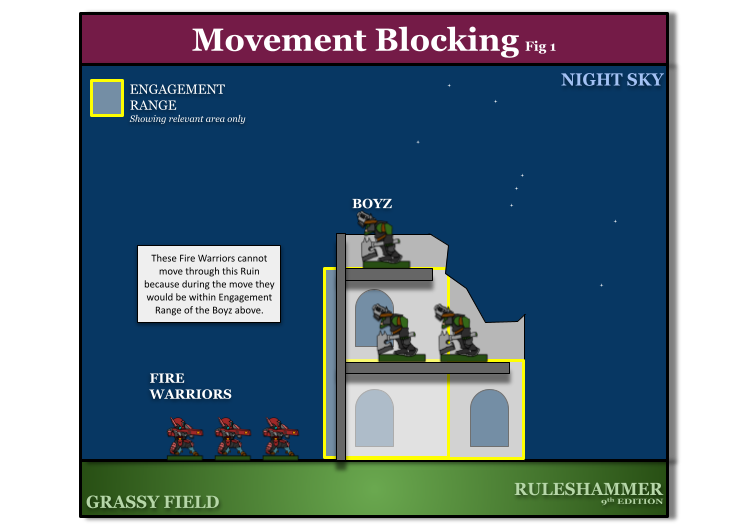 The standout clarification here is that an Advance is the whole move, it’s not a bit tacked on. This is technically the same as 8th but 9th makes that so much clearer. What is also cleared up in 9th is that even with their new movement stat it’s still just a max. Advancing with a 6” move model who rolls a 1, they’re not forced to move 6” even though they could move 7″.

Titanic models can now shoot after falling back (even if they have no specific ability for it on their datasheet). This is quite a drastic change, when vehicles can already shoot in combat. I’m sure there’s a few Taunar players who might like this change a lot, depending on what points cost the Taunar gains.

Pyskers saw a few changes in 9th, the one that’s relevant here is that Psykers that Fall Back can’t use their powers now unless they are Titanic. They can however use them whilst locked in combat, so there’s some decisions to be made on what you need most. To be able to shoot at that unit with them, or to cast powers on something else.

Wings: This is going to have a big impact on armies like Thousand Sons and Eldar, because it makes it possible to shut key abilities down with bully charges. A lot of Thousand Sons player are also about to discover that Magnus doesn’t have the TITANIC keyword.

A difference by omission – the FLY keyword no longer lets you shoot normally after falling back.

Wings: This is just violence.

At last this is considered a type of move with a nice clear definition.

If a unit Remains Stationary, none of its models can be moved for the rest of the phase. Any units from your army that were on the battlefield and were not selected to move in the Move Units step of the Movement phase are assumed to have Remained Stationary that phase.

So even before some of the changes for Reinforcements this explains clearly that if they weren’t on the battlefield at the start of the turn, then they did not Remain Stationary. It also means now that rules that say a model or unit should be treated as if it remained stationary means the unit should NOT be treated as if it Advanced as that is a separate type of move.

Turrets were a sore subject for Ruleshammer. The new rules bring them back in as part of the model’s hull though and actually gives clear rules on how and when they can be rotated.

This last line is going to be key in understanding how to account for movement of these parts in the new edition. 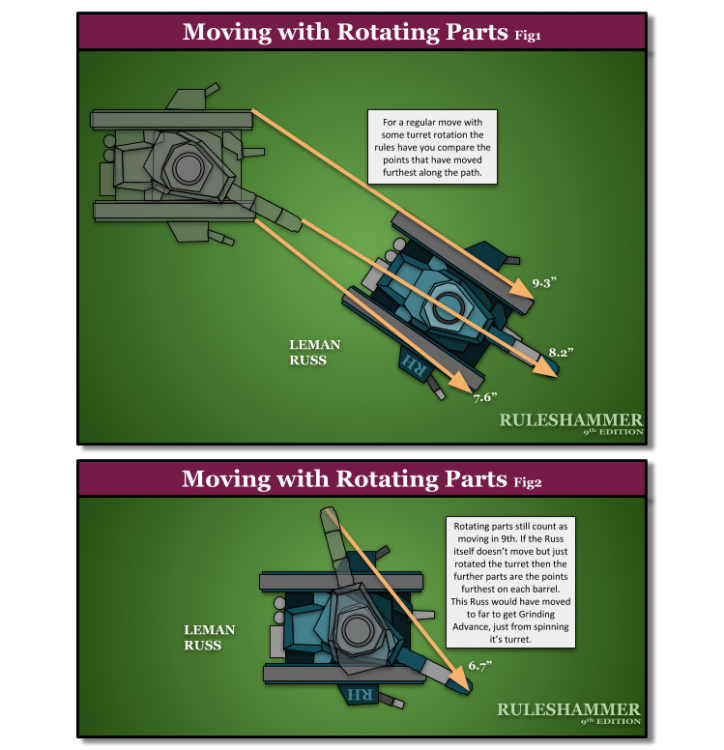 This isn’t massively different to 8th, but it’s still a vast improvement from when I last covered this.

EDIT:  Sometimes someone sums up a rule better than I did and I had to share it.

End of the Movement Phase No More

They now have their very own step of the Movement Phase to come in on. This does cause a rather subtle change though as it invalidates this FAQ from 8th edition.

Q: If I set up a unit on the battlefield as reinforcements at the end of my Movement phase, can I then use any Stratagems that are used ‘during your Movement phase’?
A: No, unless the Stratagem specifically says otherwise.

Now that reinforcements arrive during a whole separate step of the Movement Phase, then stratagems normally reserved for use before the first “end of the Movement” phase unit is deployed can now be used.

Wings: There are a couple of really big beneficiaries from this and it wouldn’t shock me if we saw a gradual wave of updates to effects that used to be “in your movement phase” to become “in the Move Units step of your movement phase”. For now though, go wild!

Count as Moved how far?

They count as if they moved as far as they could if they had done a normal move (i.e. a distance equal to their move characteristic, and their maximum move if they have a range). Nothing more and nothing less. I’m really happy to finally have this written specifically in the rules as it clears up and confusion on if they moved 0” but still counted as moved.

Wings: One minor hole here is that I would probably have chosen to make models coming in from reinforcements count as having made a “Normal Move”. There is already one place in the book where the wording “as long as it has not yet made a Normal Move, an Advance or has Fallen Back that phase” is used, and it feels like not applying the tag to reinforcements is thus an accident waiting to happen.

If a unit’s datasheet has the Fly keyword, then when it makes a Normal Move, an Advance or it Falls Back, its models can be moved across other models (and their bases) as if they were not there, and they can be moved within Engagement Range of enemy models. In addition, any vertical distance up and/or down that they make as part of that move is ignored. However, these models cannot finish their move either on top of another model (or its base) or within Engagement Range of any enemy models.

Fly’s rules are no longer tied to a phase but to a list of specific move types; Normal, Advance and Fall Back. This means Fly’s rules apply in all phases but only if you’re making one of the allowed types, Charge Phase for instance is not one of these types (but there’s more to say about that when I get to the Charge Phase). This is a far clearer way to do it and it clears up loose ends for any rules that allowed movement for Flying models in other phases, but that didn’t say “as if it was the movement phase”, causing them to have to walk.

Disembarking has also changed so that you now have to be wholly within 3″ of the transport when you do so. That removes the ability to squeeze an extra inch of movement by deploying models with just the tip of their base within the 3″ range.

Wings: There’s currently also a major gap here that will almost certainly get a quick FAQ. In 8th, an FAQ was added such that you couldn’t use any ability that granted an “out of phase” move to embark in a transport unless explicitly specified. Now the criteria for doing so is just that you have to make a Normal Move, Advance or Fall Back and end within range, meaning any ability letting a unit “move as if it were the movement phase” without additional qualifiers is theoretically fair game.

Models Inside Have Also Moved

A very welcome change that is taking full advantage of the new movement types is how they apply to models inside a transport.

For all rules purposes, units that are embarked within a Transport model that has made a Normal Move, Advanced, Fallen Back or Remained Stationary also count as having made the same kind of move that turn.

So if you have an Ork Trukk that has made an Advance move then even though the models aren’t on the board they still count as having also made an Advance move. This is far clearer than it ever was in 8th. Especially in combination with the other clarification…

Abilities and Things in Transports

At last just a blanket statement that no abilities affect them, rather than the older language about modifiers or penalties which lead to a lot of confusion about how the heavy penalty did apply but then +1 to hit abilities (which are also modifiers) did not. 9th now has a firm stance on the distinction,

What’s also better about this but a bit more subtle is that these rules are about ALL abilities, so no more figuring out if an ability is an Aura ability or not for these interactions (though that should be a lot easier in the new edition, as they’re labelled on the new datasheets as such).

Last change for transports is that missions now require models in transports to be declared before you start alternating the deployment of models. Practically this was how most already played it but it’s nice to have it written in the rules.

The Aircraft rules are clearly an evolution of what they were trying to do with the changes in 8th FAQs. Most of this has already been covered quite thoroughly, but for the sake of completeness.

Models can move within an enemy Aircraft’s Engagement Range.

Models can move over Aircraft (and their bases) when they make any kind of move.

Aircraft can make a Normal Move or an Advance even when within Engagement Range of enemy models.

The one that’s an actual change here is that AIRCRAFT don’t need to declare a fall back to move out of engagement range, which both helps them avoid getting their shooting prevented (now that FLY doesn’t let you fall back and shoot) and allows them to advance in occasional fringe situations where they’re wounded and need the extra move.

One key actual change is that models making Heroic Interventions, Pile Ins or Consolidation moves ignore Aircraft when determining the closest enemy model unless they have the FLY keyword.

Finally, one issue needing an FAQ that’s snuck through is that Aircraft are theoretically completely immune to charges:

As models can’t end within Engagement Range of them when making ANY kind of move, with no exception for models that can Fly.

Wings: We obviously do not think this is the intent or endorse playing like this – this will be swiftly fixed, as it’s clear from other rules that FLY units are still supposed to be able to melee AIRCRAFT. Either there’s a missing “in the movement phase” here or “any kind of move” is meant to be a shorthand for “Normal Move, Advance or Fall Back”.

That’s it for movement, tune back in tomorrow when we’ll be looking at the Psychic and Shooting phases.